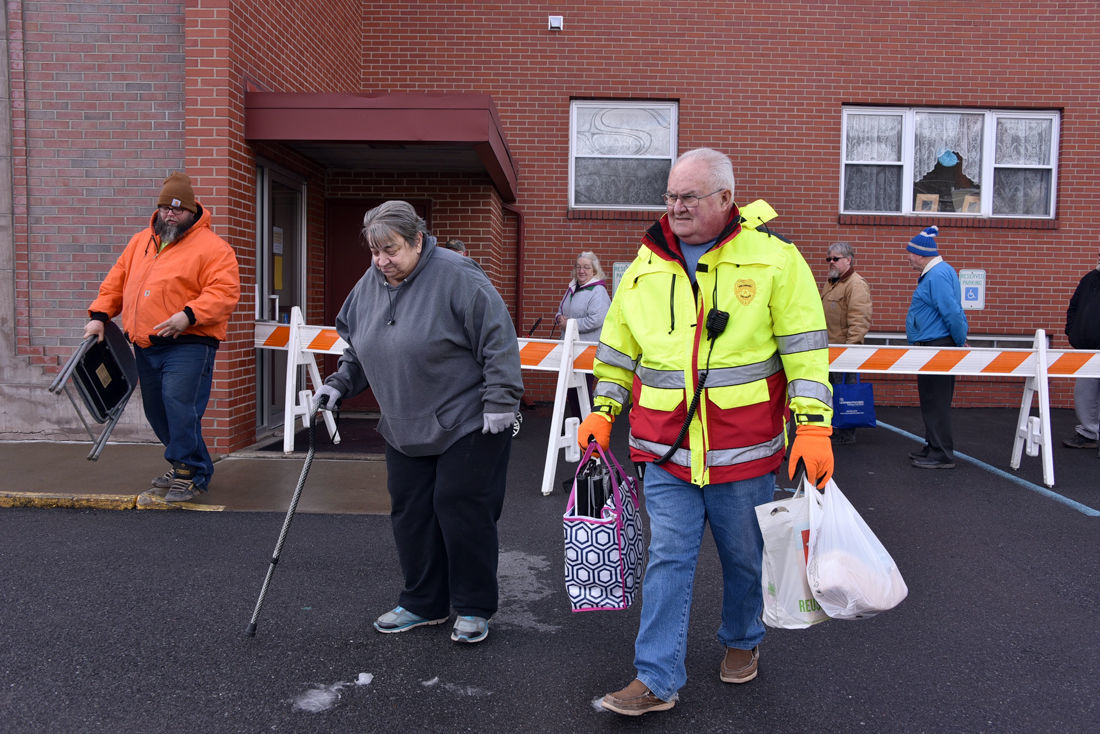 Darlene Sayers gets assistance with carrying her food pantry packages to her vehicle from James Daugherty. 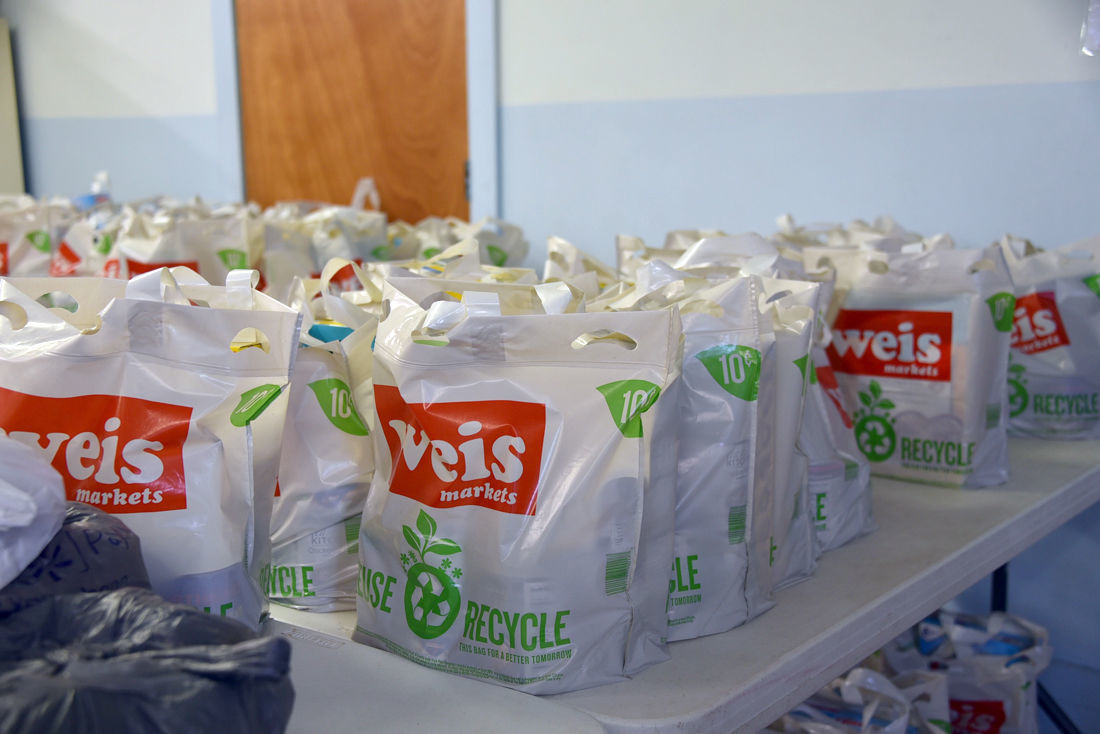 Bagged food sits in rows on the tables, waiting for volunteers to hand it to clients at the Wellsboro Food Pantry. 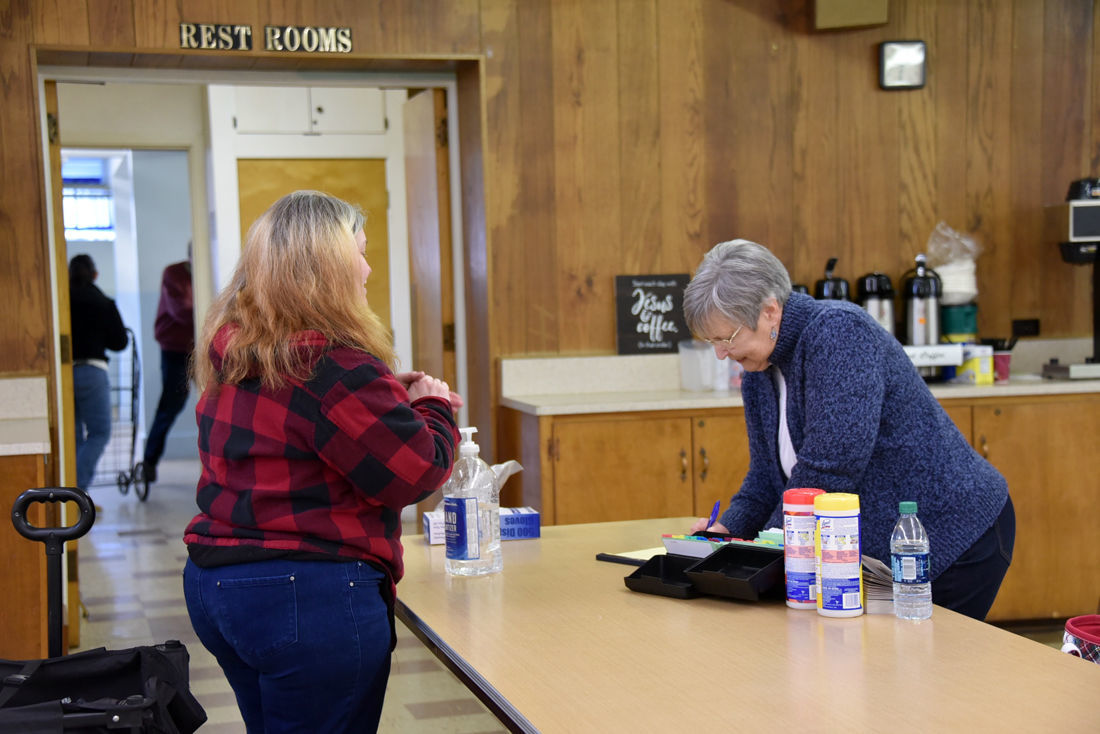 Peggi Yacovissi (right) signs in a client. Hand sanitizer and gloves were available for all to use. 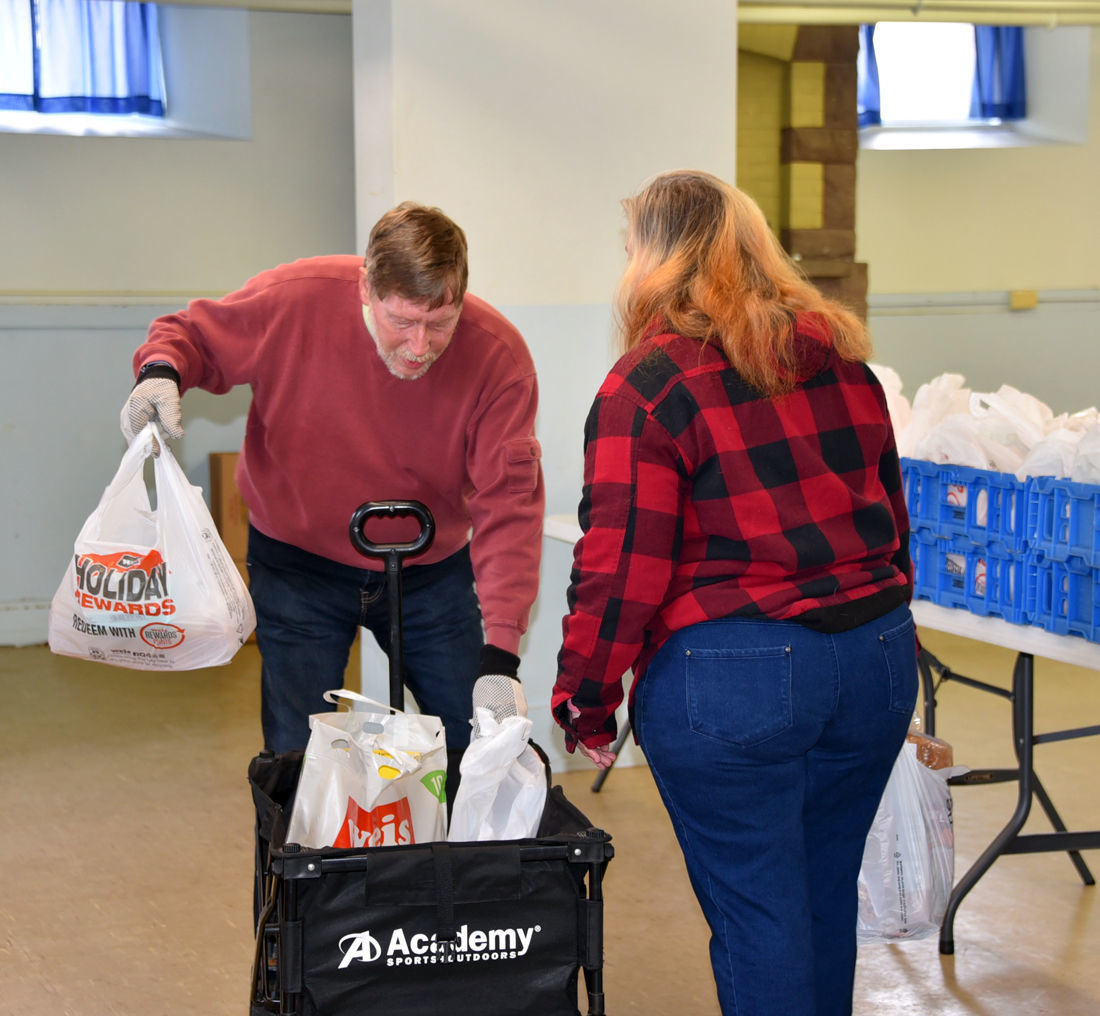 A Wellsboro Food Pantry volunteer loads a wagon for a client.

Darlene Sayers gets assistance with carrying her food pantry packages to her vehicle from James Daugherty.

Bagged food sits in rows on the tables, waiting for volunteers to hand it to clients at the Wellsboro Food Pantry.

Peggi Yacovissi (right) signs in a client. Hand sanitizer and gloves were available for all to use.

A Wellsboro Food Pantry volunteer loads a wagon for a client.

TIOGA COUNTY — The barriers were in place outside the Wellsboro United Methodist Church as the bi-monthly food pantry’s 9 a.m. opening neared.

Bill Yacovissi, coordinator, stood ready as did a reduced number of volunteers inside. Typically, the pantry serves between 75-80 people. Due to social media and reports from other food pantries, they were prepared to serve up to 300 people.

Typically, clients enter the building, sit at tables in the waiting area, drinking coffee and chatting before moving through the line to select what food to take home.

That didn’t happen this month and won’t for the foreseeable future. Yacovissi admitted five people at a time. They followed a yellow tape-marked route, stopping on an X strategically placed six feet apart. They signed in, pumped Purell onto their palm and then moved through the line, collecting pre-packaged bags of food before exiting from the side door.

At close, the pantry served the average number of clients. That may change next time. Those who used the food pantry were respectful of the changes, he said.

“Everyone disinfected their hands. Quite a few took gloves,” Yacovissi said. “They were very respectful of the process and maintained the recommended distance between clients and volunteers.”

Client Darlene Sayers said the pantry helps her with staples such as vegetables, pasta and meat. During the pandemic, she is being extra careful to wash her food before consuming.

Robert Owen from Gaines is taking precautions, but is not worried.

“The Lord will take care of me,” he said.

Charles Whitehead from Middlebury Center said the pantry helps feed him, his son and girlfriend. They have not stocked up on food, so the pantry items will help the family have enough through the end of the month.

Doreen Burnside, coordinator of the Tioga-area food pantry, is also preparing for changes to deliver and increased need this weekend. Packages that are normally delivered to the home will continue to be, but left outside rather than carried in, she said.

Those going to St. Andrew’s Episcopal Church for pick-up will remain in their vehicles as volunteers load the food.

On average, the pantry serves about 45 clients each month.

“I figure we’re going to double that,” she said.

She is grateful that she was able to stock up on the inventory in recent months.

“The Lord must have put it in our heads,” Burnside said.

Likewise, the Central Pennsylvania Food Bank has been offering free and bonus items to food pantries, enabling them to stretch their dollars further.

“I’ve done a lot of praying and a lot of stressing over it. I don’t want to see anybody go hungry,” Burnside said.

Tioga and other food pantries are reaching out to serve children who are not in school. Tioga packed 25 bags and delivered them to nearby mobile home courts.

Millerton also adapted its delivery from a client-selected to a drive-in operation with pre-packaged food using fewer volunteers, said Dolores Parchesky, the food pantry coordinator. They served 57 clients in March, an increase from the 51 served in February. She suspects it will increase next months.

With the nearness to Easter, some pantries are planning to augment their normal delivery dates. Tioga is planning a delivery on April 11, the day before. Straight from the Heart in Lawrenceville is planning another distribution on April 2, said Linda Giardina, coordinator.

The Lawrenceville pantry averages 50-55 clients each month. They served 79 last week, she said.

Because of anticipated demand, organizers are planning a second distribution date from the third Thursday to the second and fourth Thursdays.

All the pantries are hopeful they will be able to continue to meet the need in the community, and are adapting quantity and delivery to do so.

“They might not get the variety they did this month, but they will get something,” said Giardina. “We’re going to be open for as long as we can. Hopefully, we can get them through this.