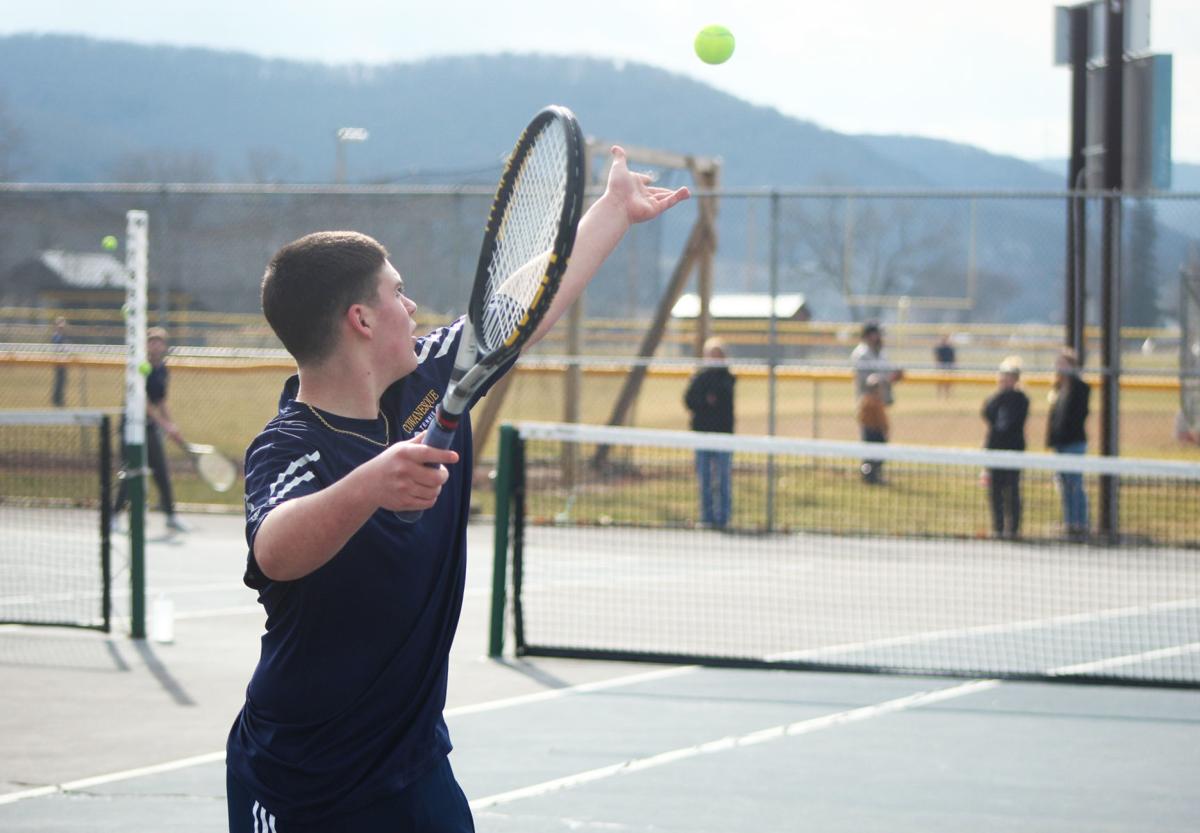 Brody Johnson returns the ball for the Cowaneque Valley Indians during their loss to North Penn-Liberty on Thursday, March 12.

Brody Johnson returns the ball for the Cowaneque Valley Indians during their loss to North Penn-Liberty on Thursday, March 12.

WESTFIELD — The Cowanesque Valley Indians boys tennis team was unable to come up with a win in their season opener as they fell 5-0 to the North Penn-Liberty Mounties team in a tough first matchup.

Despite the loss, Coach Melissa Boyer has high hopes for the Cowanesque Valley tennis program and looks forward to a season of success in Westfield.

The Indians are led by a roster of Arch Ackley, Tommy Mack, Joel Heck, Darrius Johnson, Kenny Watterson, Jackson Pritchard and Brody Johnson and though they are composed of a lot of juniors and seniors, they may lack a bit of game experience.

“We’re a really young team,” she said. “The majority of my kids are still pretty inexperienced, even though they are juniors and seniors. So I think they’re all going to step-up and become leaders in the sense they will help each other out.”

Though there’s some new faces on the court for the Indians this season, Boyer believes that this team could be strong competitors in the NTL this season.

“The biggest thing we want to do is that every match everybody individually improves,” she said. “With the new format we have the pressure on everybody versus when teams could just repeat players.”

With a new format that puts an emphasis on teams being more well-rounded from top-to-bottom, Boyer thinks the depth of her team will have a positive impact on her teams’ ability to produce from all spots in the lineup.

“Every point for every kid counts now. So that’s a lot of pressure for kids who don’t have that much experience. So I’m hoping that they’ll get confidence as the season goes on,” Boyer said.

Even with a young roster, Boyer feels confident that they can make some noise in the NTL and possibly be vying for a spot in the District playoffs when all is said and done.

“Our goal is to make Districts, and more than that, our goal is to win at least half our games. It’s been years, and we haven’t had enough players or had enough matches to get there,” Boyer said. “Now we have a bigger schedule and it would be nice if within the league they can hold their own.”

The Indians tennis teams next match was scheduled against the Towanda Black Knights but with the recent postponement of the 2020 spring sports season, the next action for the Indians is TBA.