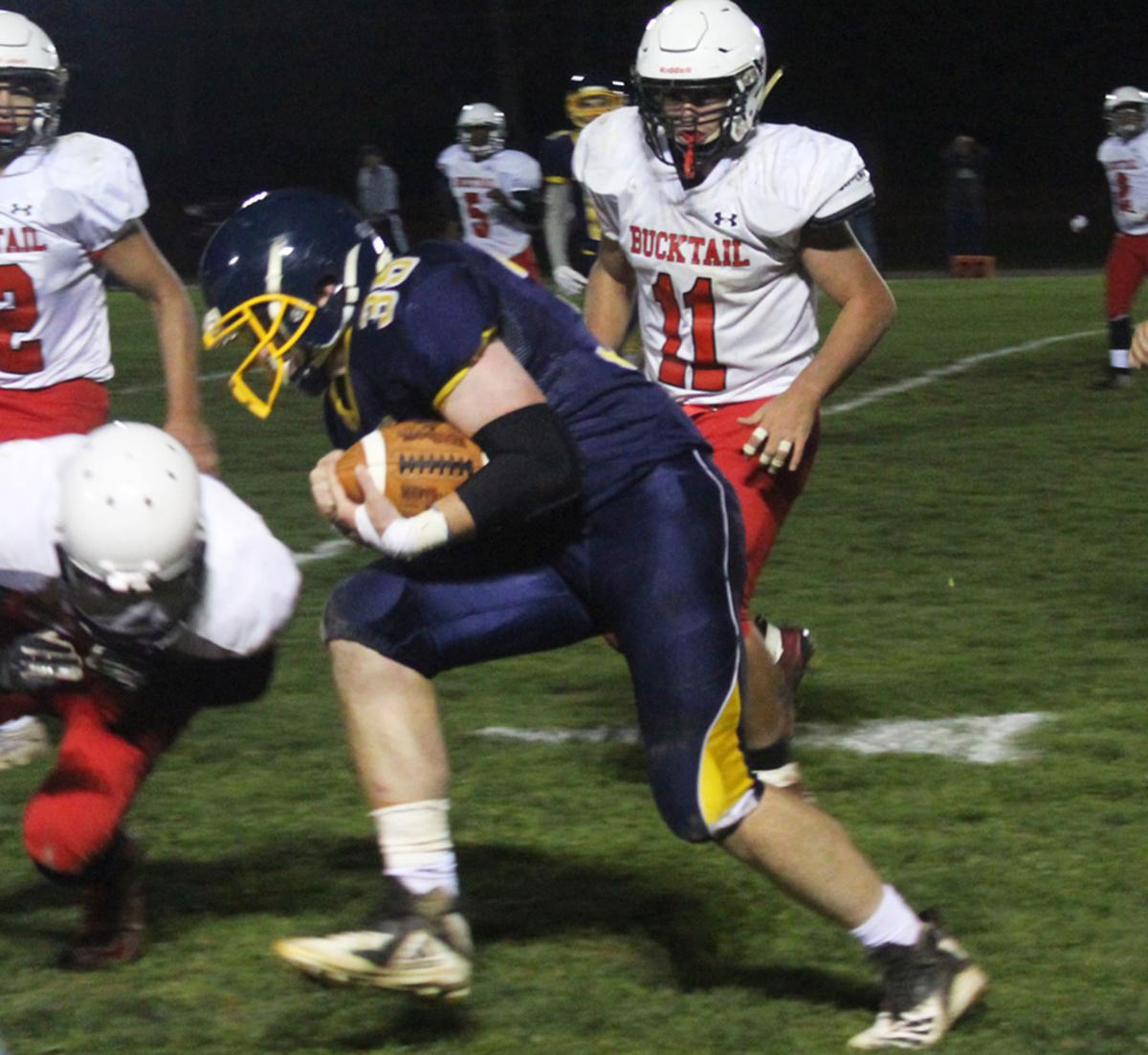 Owen Fitzwater lowers his shoulder after a catch and run during the Indians 35-6 Homecoming victory. 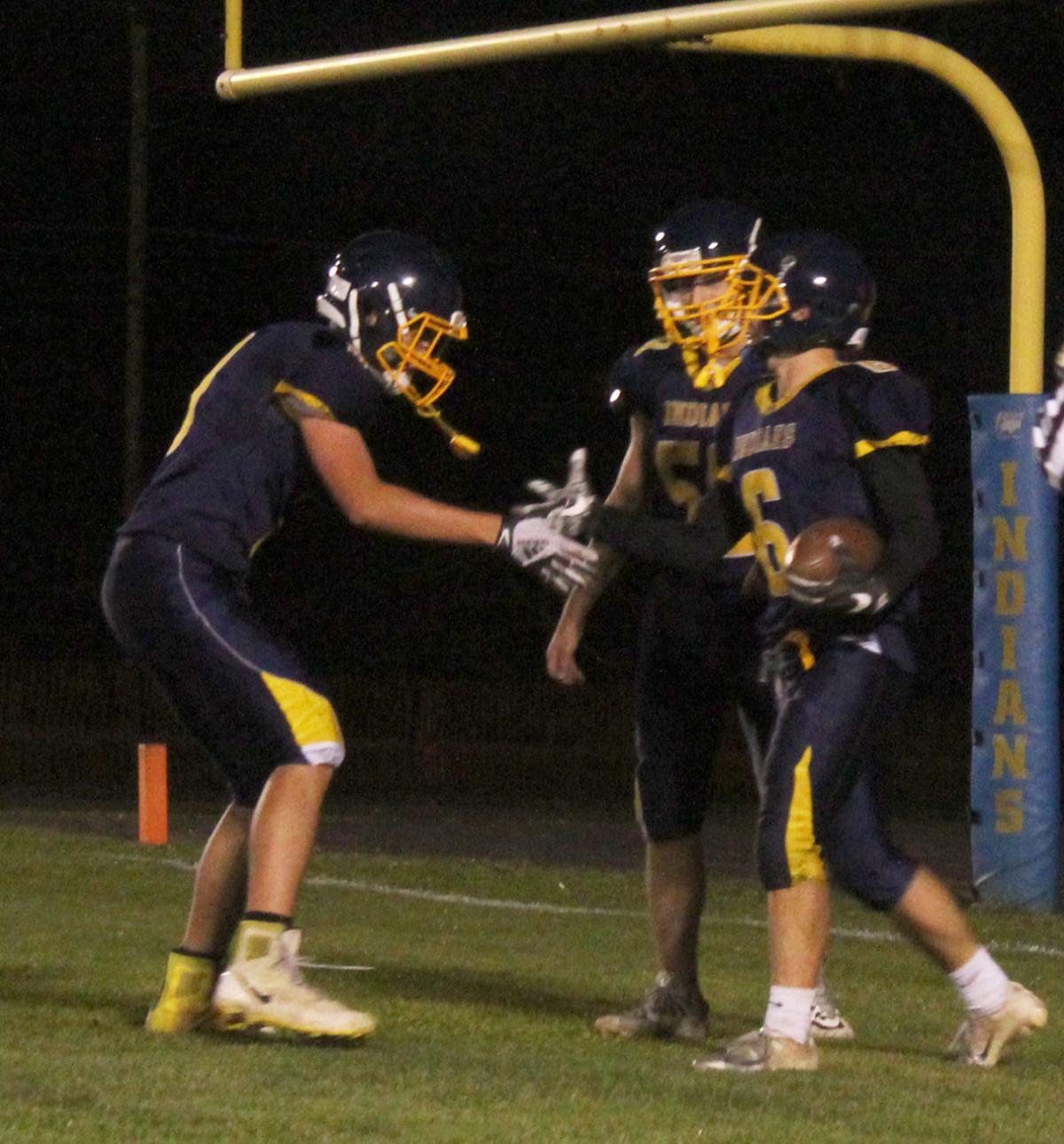 Elliot Good celebrates his first touchdown of the night during the Indians Homecoming victory.

Owen Fitzwater lowers his shoulder after a catch and run during the Indians 35-6 Homecoming victory.

Elliot Good celebrates his first touchdown of the night during the Indians Homecoming victory.

WESTFIELD — On a chilly October night under the lights, the Cowanesque Valley Indians put on their best all-around performance of the year so far, winning 35-6 over Bucktail and putting on an offensive show for their home crowd during Homecoming. The Indians gained a total of 428 yards offensively and scored six touchdowns in the contest to give them their second victory of the season and their first home win of the year as well.

The Indians started the game aggressively, driving down the field and taking a chance on fourth down on the very first drive. Despite turning the ball over on downs, it set the mood for how the Indians offense was going to operate. They went for it on multiple fourth and long situations in the contest and were rewarded on the gamble early and often. The Indians on their first defensive possession played well, forcing a punt. The punt was short and only traveled around 10 yards, giving the Indians excellent field position.

Quarterback Seth Huyler took advantage of the field position on the very next play, on an option read that fooled the whole defense and most of the spectators, he pulled the ball and ran into the endzone almost untouched for the first score of the night for the Indians.

Soon afterwards, the defense came up with another big play, with Tanyon Brown snatching an interception and taking it out to the Indians 35-yard line and set the Indians up with another drive. They were able to capitalize on the opportunity and Elliot Good was able to punch in a 15-yard run and give the Indians a 14-0 lead heading into the second quarter.

Bucktail was able to strike back in the second quarter early, with running back Gage Sutliff taking in a powerful 5-yard run for the touchdown and getting his team back within striking distance. They were able to stop the Indians on their next possession and get the ball back once again and try and tie up the score.

The Indians defense came up with a huge play to stop Bucktails run, with Luke Willis catching a tough interception and running it all the way down the one-yard line and set up Good for his second touchdown of the night and put the Indians up 21-6 with time running out in the half.

From this point on the Indians defense smothered the Bucktail team and forced a three and out with 2:26 remaining in the half and 70 yards of field between them and a touchdown. The Indians orchestrated a quick drive, ending with Huyler breaking free on a long run for his second touchdown, and give the Indians a lead of 27-6 with only 48 seconds left in the half and close out the scoring for both teams going into the break.

The second half of football the Indians defense were able to hold the Bucktail team scoreless and keep the running game of the Bucktail squad in check. Neither team was able to score in the third quarter of play, and the Indians were sitting in a favorable position going into the final quarter with a 21 point lead.

The final quarter was opened with the Indians finding the endzone on their first play, with Huyler finding Owen Fitzwater near the sideline as he broke free for the touchdown. Fitzwater also caught the two point conversion to bring the score to 35-6 and put the game out of reach for Bucktail and give the Indians a big win at home.

Huyler had a strong performance, rushing for two touchdowns and throwing for one as well totaling 319 total yards on the night. Huyler credited his performance to not only his offensive line, but also his receivers group.

“It was the offensive lines blocking for sure, and the wide receivers made a lot of good catches,” Huyler said when asked about the offensive game the Indians put together.

Defensively Fitzwater continues to lead the Indians, with nine total tackles on the night. Isaac Huntington also had his best game of the season and tallied 10 tackles on the night. Magnus Swimley was also a force in the backfield, constantly getting into the backfield on his way to nine tackles, four tackles for loss and one of them being a huge sack that helped get the Indians the ball back. Coach Michael Schmidt has been impressed with Fitwater all season.

“He’s our leading tackler, and he might be one of the leading tacklers in our league. We haven’t been great on defense, so a lot of times if didn’t make the tackle, we’re probably not making the tackle. He he’s just been awesome for us.” Scmitt said.

The Indians will have a chance to win their second straight home game this Friday night, when they face a tough Sayre Redskins team at 7.pm.