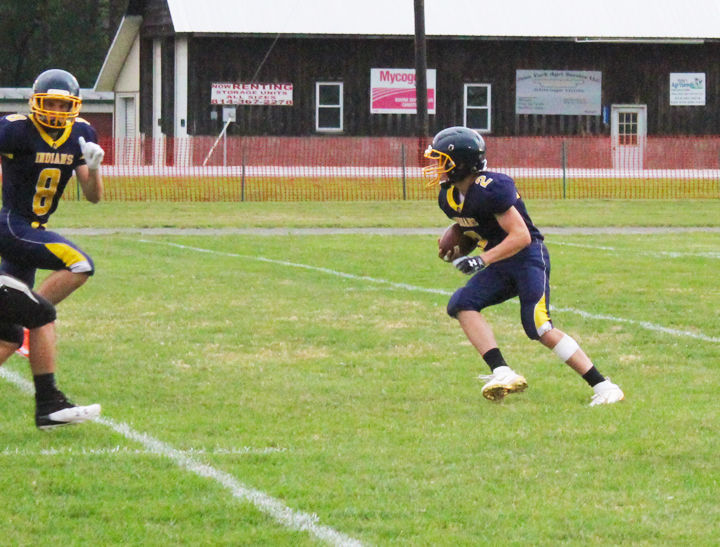 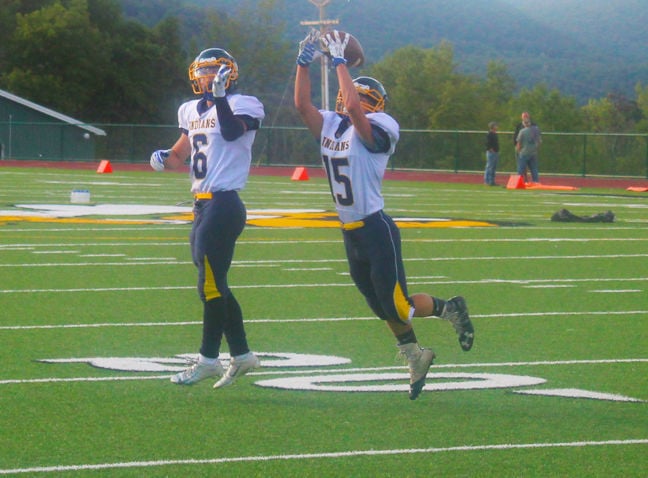 Elliott Good and Travis Madison getting warmed up for an away game against the Wellsboro Hornets.

Elliott Good and Travis Madison getting warmed up for an away game against the Wellsboro Hornets.

After losing 18 straight games over the past three seasons, the Cowanesque Valley Indians finally pulled off a big win on the road over the Columbia-Montour Vo-Tech Rams, to bring their record to 1-3 on the season. The Indians lost their senior quarterback and leader Seth Huyler early in the game, but rallied behind backup quarterback Tucker St. Peter to come up with a 20-8 victory.

The Indians came into this season with the goal of constant improvement over each game, and as the season has progressed, the team has done just that. In each of the first three weeks the offense has slowly started to come together, and with the defense playing much better this week, they were finally able to put a complete game together and come out with a victory.

Huyler has been the player who powered the Indians offense all season, but went down on the very first drive of the game. The Indians needed to find a way to get their offense going without him for the first time this year. Tucker St. Peter was the player who answered for the Indians ,completing 8-12 passing with 124 yards and two touchdowns on the night in relief of Huyler. He also ran for a score, accounting for all three touchdowns for the Indians. They will need St. Peter to continue to improve, especially if Huyler is going to miss any significant amount of time.

The offense was very balanced this week, running for 103 yards and also passing for 124, but it was the defense that stepped up for the Indians in a big way. After having allowed an average of 50 points a game through the first three games of the season, the Indians clamped down on the Rams and only allowed eight points. They also only allowed 158 yards, their lowest total of the season.

The Indians will need to continue to improve as the season continues, with a much tougher match-up this week on the road against the North-Penn Mansfield Panthers. Both teams will come into the game looking for their second victory of the season.

They will also depend on backup quarterback St. Peter to step up once again, especially if Huyler is unable to play again this upcoming week.

Partly cloudy skies in the morning will give way to cloudy skies during the afternoon. High 47F. Winds NNW at 10 to 20 mph.