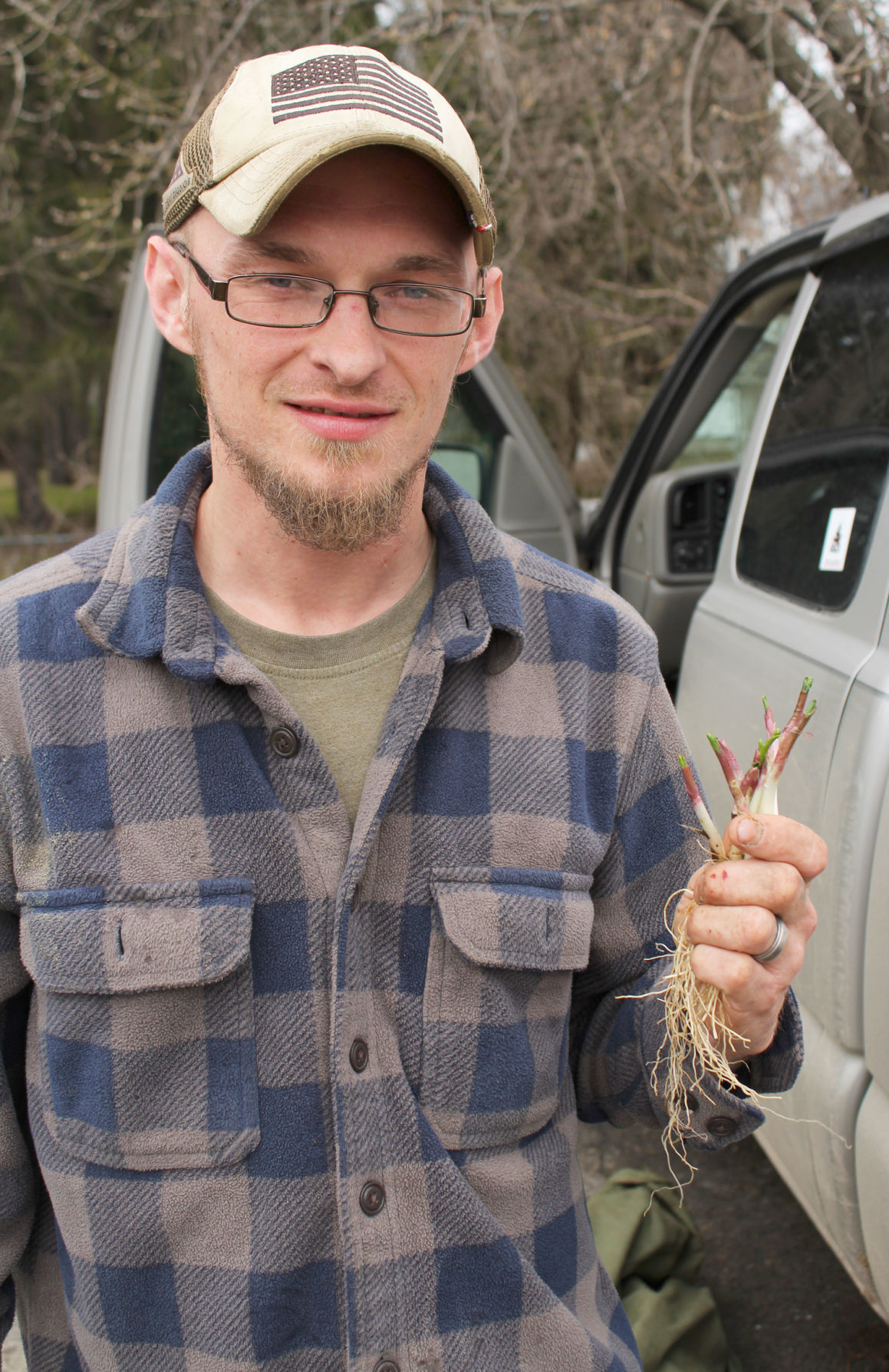 Matt Stevens with a hand-full of early leeks that he picked on Friday, March 20. Leeks picked this early will be a bit potent, Stevens said. 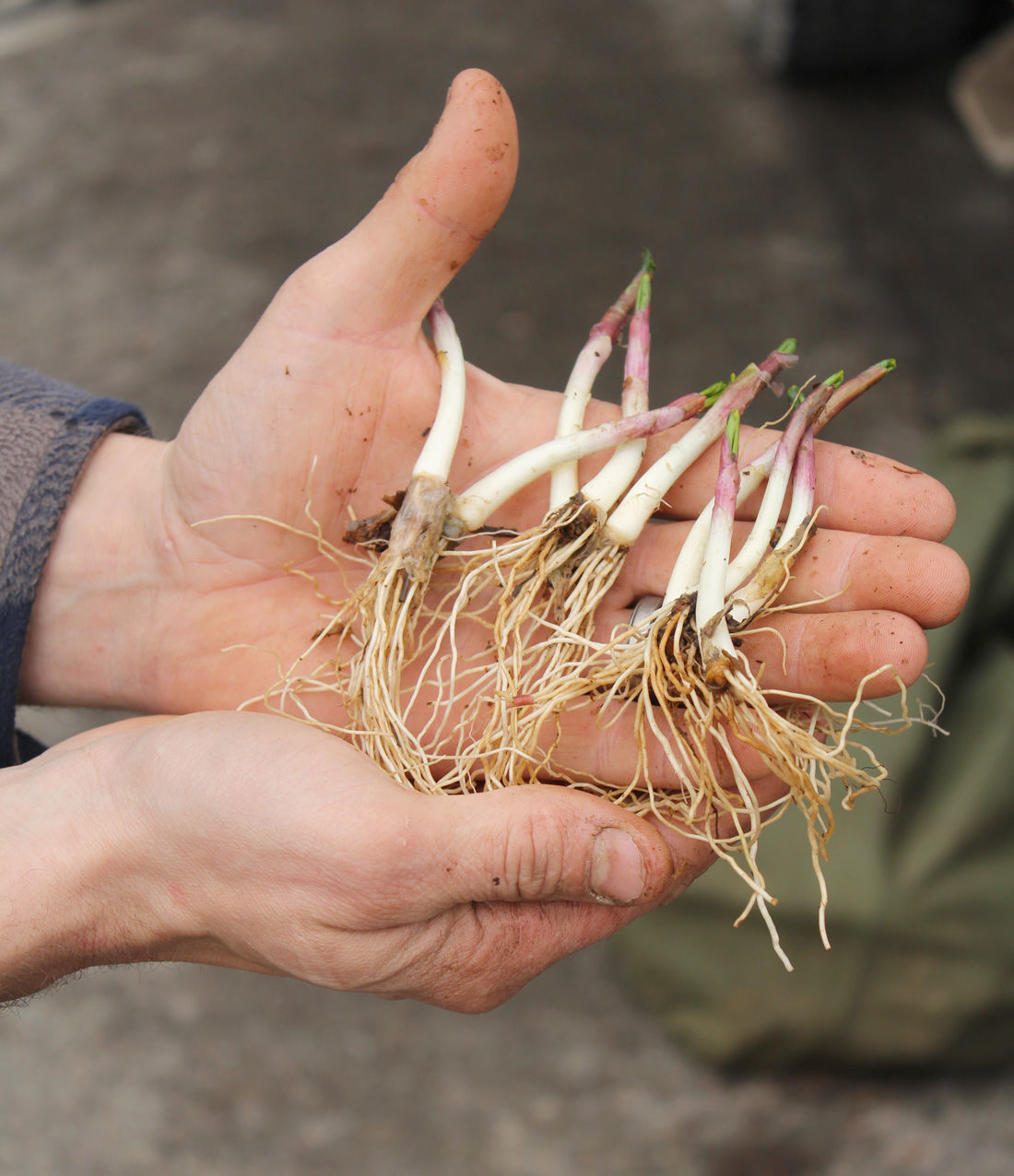 These leeks were picked Thursday, March 19. Matt Stevens owner of The Hickory Grove said during the next couple weeks leeks will really start to poke out of the soil.

These leeks were picked Thursday March 19. Matt Stevens owner of The Hickory Grove said durign the next couple weeks leeks will really start to poke out of the soil.

Matt Stevens with a hand-full of early leeks that he picked on Friday, March 20. Leeks picked this early will be a bit potent, Stevens said.

These leeks were picked Thursday, March 19. Matt Stevens owner of The Hickory Grove said during the next couple weeks leeks will really start to poke out of the soil.

These leeks were picked Thursday March 19. Matt Stevens owner of The Hickory Grove said durign the next couple weeks leeks will really start to poke out of the soil.

Shoots are just starting to pop out of the soil and for those who like their leeks a little more potent, now is a good time for picking.

But to those who haven’t tried the odoriferous vegetable, the best time to pick them is in another week or two.

Matt Stevens, owner of The Hickory Grove in Middlebury, compared leeks to a cross between an onion and garlic. With social distancing being the word of the month, Stevens said, leeks are your best friend because no one would want to come around you.

While known for their strong smell, Stevens said leeks are packed with vitamins and minerals and contain a lot of medicinal properties.

For Stevens, leeks proved to be more than just medicinal. As far back as he can remember he said his family would sell leeks from a stand on the roadside. When Stevens returned home from the military in 2013, he said he bounced from job to job and wasn’t finding anything permanent. That’s when he remembered selling leeks as a kid.

So, Stevens posted online that he had leeks for sale and within a month had made between $3,000 and $4,000. After that early success Stevens started The Hickory Grove and began selling leeks and added other items over time. He now sells leeks locally and across the country.

“It all took off thanks to the leeks,” Stevens said. In addition to getting his own business started, Stevens said leeks actually have a long history in the area. Stevens said he found a journal from one of the first families in the area that referenced eating leeks for several months before the family was able to sustain themselves with proteins from meats.

While leeks may a lengthy history in the area, some leek hunters are reluctant to divulge where they find their leeks. Stevens said, some people are protective of their spots because it’s difficult to be conservative with them. If too many people are foraging leeks from the same spot, the leeks might not grow back there.

“If you drive down the road and see these small patches that are the size of a regular garden you should leave those alone,” Stevens said. “We have massive patches here in Tioga County the people don’t look for.”

Speaking about the prevalence of leeks in this area Stevens said if people go on any trail in the next couple weeks they will see leeks.

Once foraged, Stevens said leeks can be prepared in ways similar to onion and garlic.

“You can eat the entire plant from the top of the leaves to the bottom of the roots,” Stevens said.

Ham and leek soup is a common meal, but Stevens said the list is pretty much endless concerning how leeks can be prepared. They can be put in a pesto, pickled, grilled or eaten raw just to name a few.

If nothing else, leek harvesting give people one more reason to get outdoors.

“The world is sick right now,” Stevens said. “The best thing we can all do is choose to be healthy. What I would say is, if leeks give you a reason to get out and get moving in the woods, then by all means do it. You get fresh air and you get exercise. It’s something that families can do together and it’s a fun thing to do.”

For more information about The Hickory Grove or leeks in general visit Stevens’ Facebook page @TheHickoryGrove.

Showers in the morning, then cloudy in the afternoon. Thunder possible. High near 70F. Winds SW at 10 to 15 mph. Chance of rain 40%.