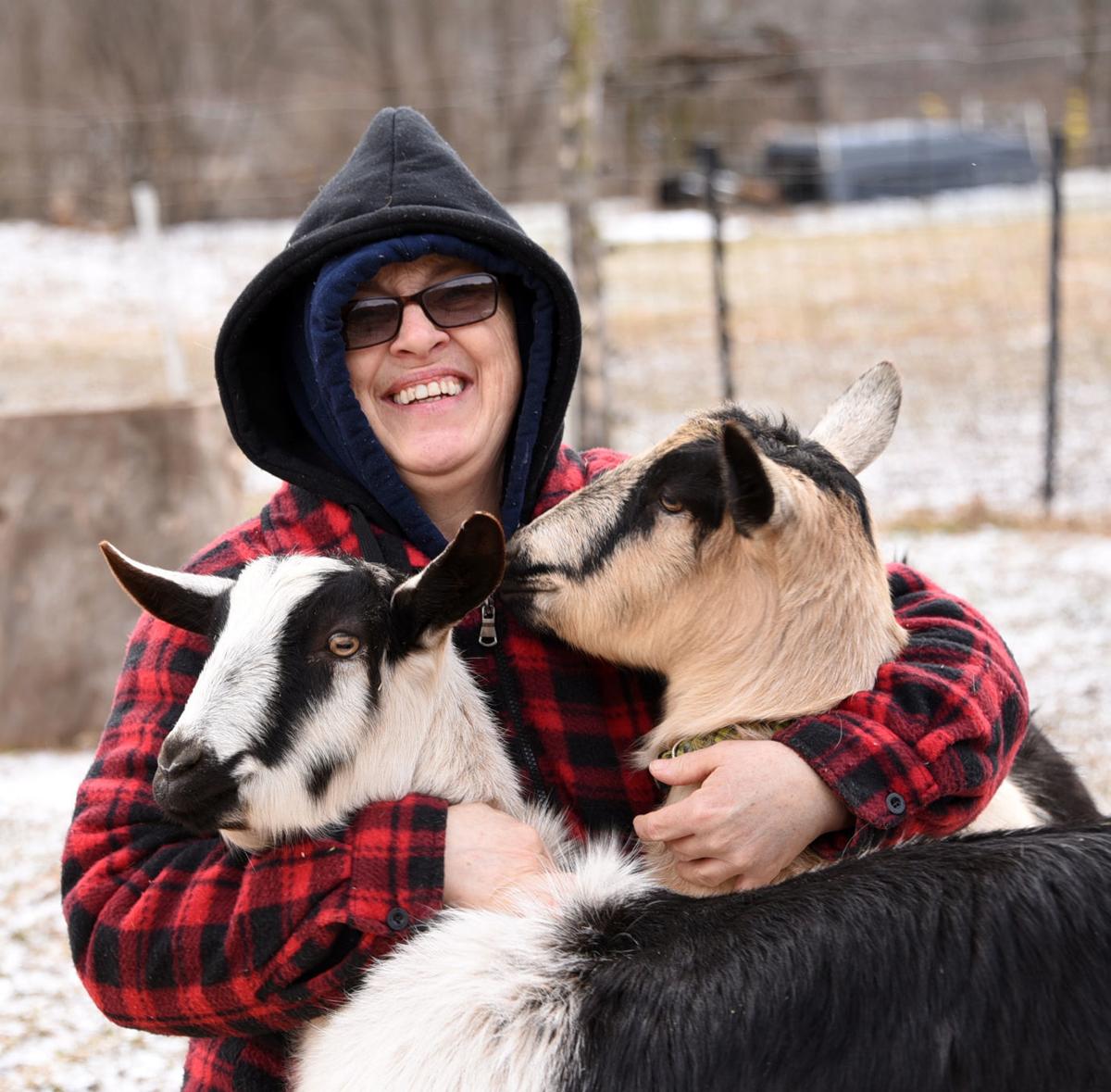 Esther Perry gets goat kisses from Bailey (front) and Betsy. 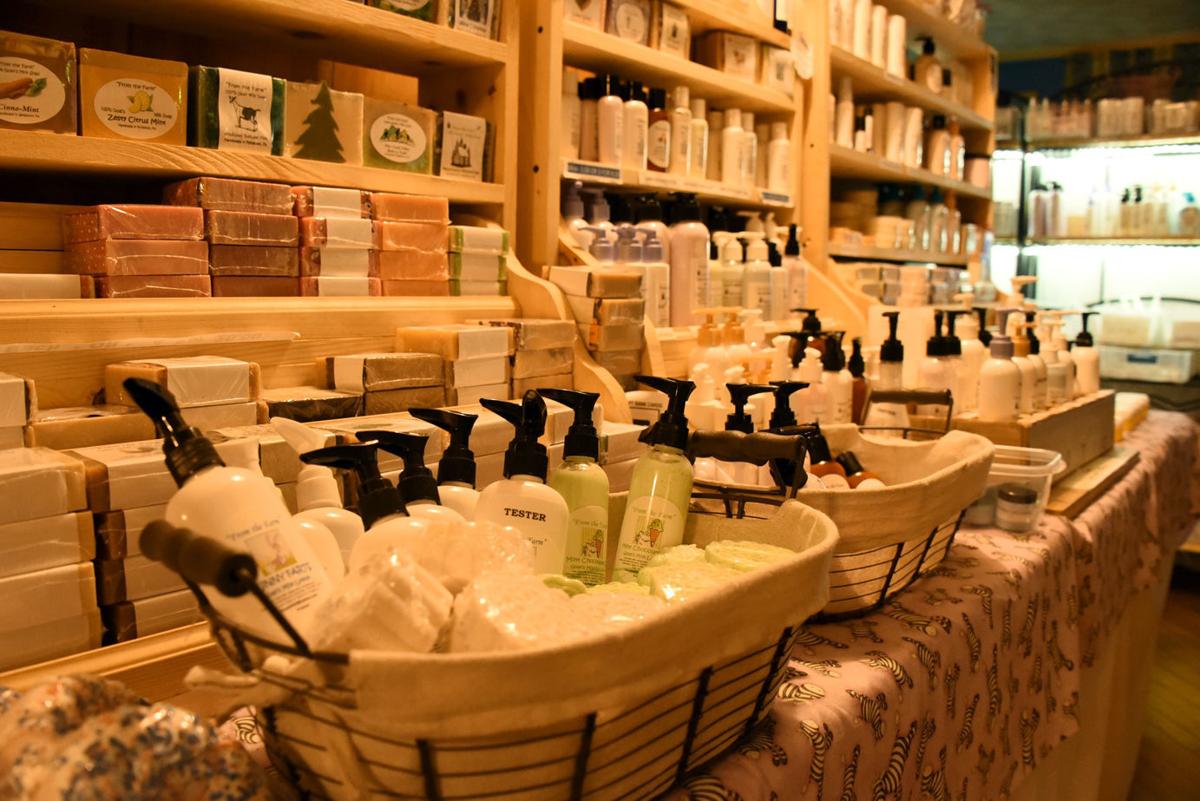 Stacks of goat’s milk soap, lotions, foot soaks and other products line the display inside Esther Perry’s showroom for From the Farm.

Esther Perry gets goat kisses from Bailey (front) and Betsy.

Stacks of goat’s milk soap, lotions, foot soaks and other products line the display inside Esther Perry’s showroom for From the Farm.

From the Farm, a cottage industry on a dirt road in Delmar Township, involves a woman, and a handful of dairy goats and a passion for helping others.

Esther Perry has been making and selling bath and body products since 2013. It began when she got sick and decided that goat’s milk might help fight her bowel infection.

It did. Within five days of starting on the goat’s milk regime, she was better. She also fell in love with the goats.

That goat produced about a gallon of milk a day. Esther fattened a hog on what she couldn’t drink, but once the hog went into the freezer she again had an over-abundance of milk.

She decided to try her hand at making soap and soon had more soap than she could use or give away. That’s when her business was born.

These days, she not only produces soap, but also lotions, body cream, lip balms, natural deodorants, bath salts, foot soaks and creams, dog soaps, facial products and engagement and wedding favors. All are made with as much goat milk products as possible and other high-quality natural products.

Her two acres is home to two bucks (males) and three does (females), Galaxy, who produced two kids Feb. 28; and Galaxy’s twin daughters: Bailey, due to have her first kids in May; and Betsy.

With just two milking does — and one in her first year of milk — Esther may not have enough goat’s milk to produce as much products as she did in 2019. She still has milk left from 2019 — three freezers full of frozen portions of goat’s milk for soap and lotion.

But she’s not worried. The goat community is a friendly one. A fellow goat producer has offered to loan her two Oberhasli does for the summer. Other goat breeders and farmers are able to help when she has a need — a flare-up of fibromyalgia, vacations or when an animal gets sick.

“We share the same passions. We love our animals and we love our products,” Esther said. “It’s all warm and fuzzy until a goat sprains a leg or has health challenges, then the stress mounts.”

In farming and especially with animals, things go awry very quickly. Her main dairy doe, Galaxy, was due to kid Feb. 24. Three days later, Esther had to get medicine to induce labor. A day later, the kids arrived Healthy and sound, but Galaxy’s calcium levels dropped, necessitating a trip to Cornell University and a five-day stay.

“I have a college education in goats and this is only the first semester,” she joked.

There’s always another expense in a small business. It takes 400 bales of hay to feed her herd for a year, each bale costing $4. Then there’s grain, veterinary bills, fencing and barns.

That’s only to get the milk. Esther then has to purchase other materials: vitamin E, beeswax, coconut oil, natural oils and scents, along with the containers and packaging materials.

“This will always be a little shop on the back road. It is my hobby,” she said. “I’ve reached my plateau. It’s all I can do. My hands are full, but I have a lot of other hands involved.”

Those hands include friends and family, her mother Eloise Caseman and sisters Patsy and Kay Mitstifer who help promote the products.

Driving her is the desire to help people. During her six years of making goat’s milk products, she’s received numerous testimonials from people whose skin feels softer, whose children no longer smell funky, whose aching feet and legs got relief from her creams and who swear by their efficacy.

“The hours and hours behind that product is my gift to people,” Esther said. “If I can get the cost of ingredients and containers, it’s break even.”

Her latest ventures are open houses and, most recently, pedicures. On certain days, Esther will open her house and barns — free of charge — for visitors to see her products, eat some refreshments and meet the goats and their guardian, Sugar, a Great Pyranees. She reports some people have traveled two to three hours to attend.

“It’s not about the money; it’s about helping people,” she said.

There’s no telling where the business will go next, but Esther said she’ll continue making the journey.

“I’m glad to be here,” said Esther. “Everything I need is nearby. I’m thankful for this community. It works well because when I need to reach out, it is within the community.”

For more information, find From the Farm on Facebook, visit fromthefarmstore on Etsy, call 570-724-2989 or email shunk424@yahoo.com.

Partly cloudy skies this evening will give way to occasional showers overnight. Low 52F. Winds W at 10 to 15 mph. Chance of rain 40%.