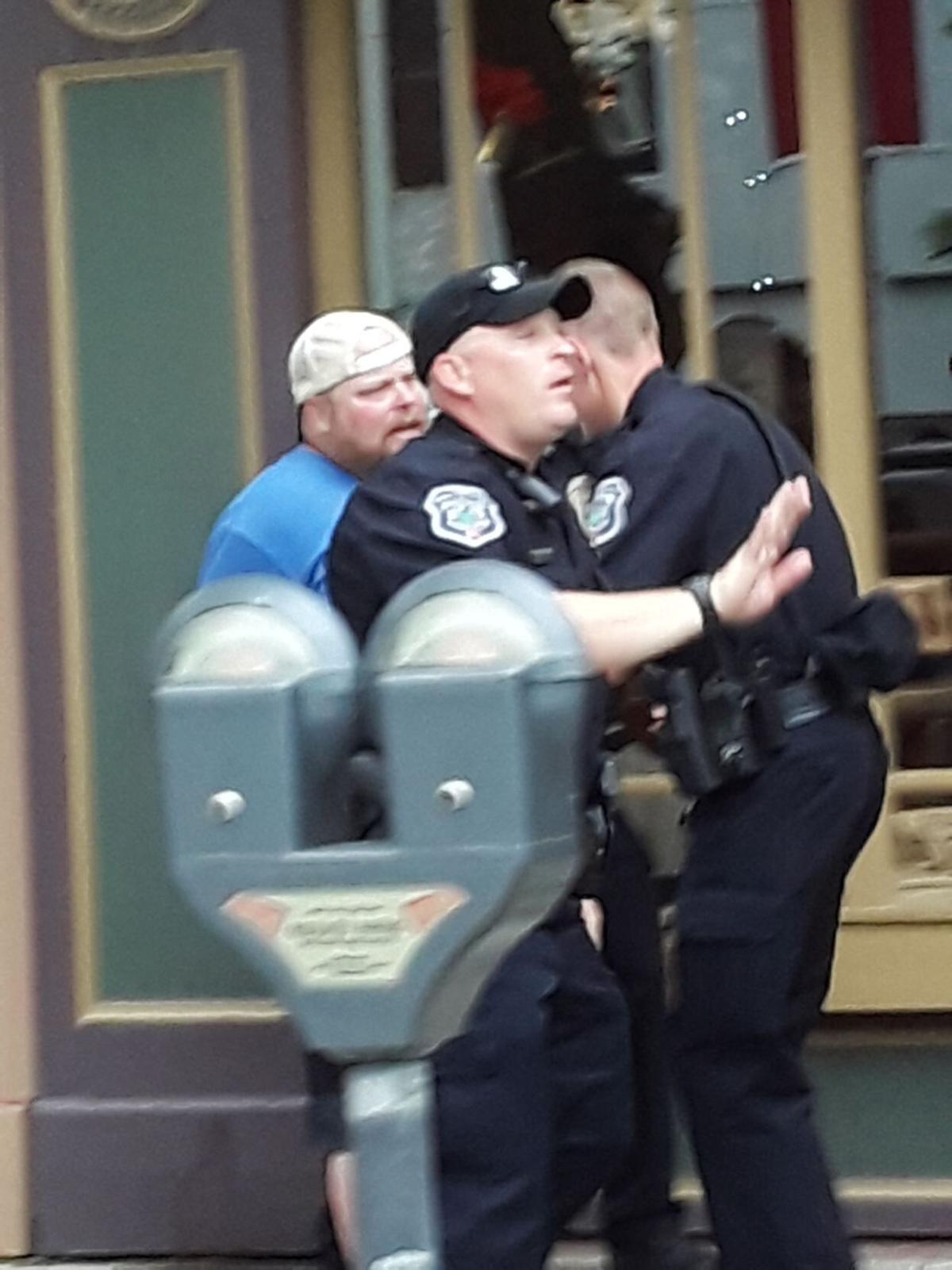 Police handcuffed Brad Wilson after he repeatedly walked into Main Street. He was charged with public intoxication. 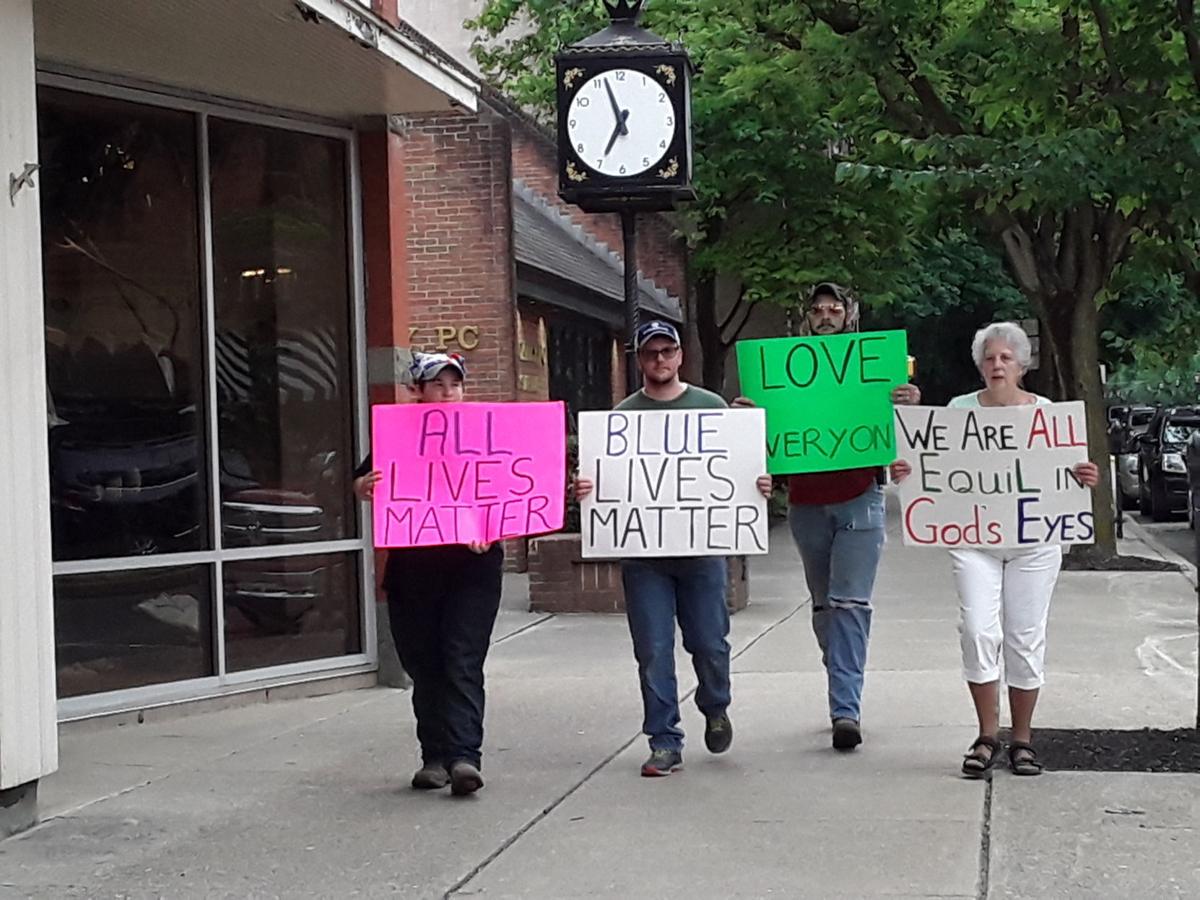 A second group of people marched with signs in support of Blue Lives Matter.

Carrying a blue line flag, a man stands on the sidewalk. Later identified as Brad Wilson, he was charged with public intoxication.

Police handcuffed Brad Wilson after he repeatedly walked into Main Street. He was charged with public intoxication.

A second group of people marched with signs in support of Blue Lives Matter.

Carrying a blue line flag, a man stands on the sidewalk. Later identified as Brad Wilson, he was charged with public intoxication.

Organizers Seth Hurd and Stephanie Locey envisioned the small demonstration as support for the recent national recognition of racial inequality.

“The public seems to have turned a blind eye towards things that distract from a life of easily accepted normality and happiness,” said Hurd. “Some claim racism and injustice are nonexistent in the modern world. This claim is freakishly from the unfortunate truth. This time, I’m speaking for those I’ve known who don’t get to speak clearly because of something as insignificant as skin color.”

As BLM demonstrators gathered on the boulevards, other people gathered in small groups along Main Street, notably in front of Timeless Destination. The crowd grew to 15 people, who waved Confederate flags and shouted comments. A small group of counter-protesters, holding signs reading “All Lives Matter” and “We Are Equil (sic) in God’s Eyes” paraded silently on the sidewalks of Main Street and refused to speak to this reporter.

“This town does not have this problem,” said a woman in the crowd outside Timeless. “Why are they bringing it here? Our little hometown – this doesn’t exist.”

Passing cars offered support to the demonstrators by beeping horns, but others shouted comments, such as “Get out of the car, I dare you” to a young man of color, and, “Go back where you came from,” among other unprintable words.

Demonstrator Lynne Graham said, “I’m here because I have a concern; police are killing people on camera. It’s very upsetting. It used to be denied, but no longer.”

Resident Merry Freligh added, after seeing the response to peaceful protest, “This is the epitome of hate and ignorance, and I am ashamed.”

Locey said, “I was very pleased to see protesters on both sides. Our right to assemble is key in a democratic society, and people have a right to voice whatever opinions they have. The disheartening part was how many insults, threats and slurs were hurled at us. I hope to one day see a forum where all political and social dissonance can be talked about calmly, without intimidation.”

One man, who identified as local and called himself “Patriot Man,” carried a large black, white and blue “Blue Lives Matter” flag.

“We love everyone,” Patriot Man, later identified by police as Brad Wilson, Wellsboro, said. “But if they start breaking things – they’re wrecking our local businesses — then it will be a danger and we’ll have to stop it.”

Police warned Wilson to remain off the median where protesters were gathered. At 7:30 p.m. he walked into Main Street, which police said he had done repeatedly, and refused orders to leave. Police intercepted and handcuffed him. He was charged with public intoxication and taken home without incident, said police.

The Gazette will update this story as new information is added.

Sunshine and clouds mixed. A stray shower or thunderstorm is possible. High 81F. Winds SW at 5 to 10 mph.

Rain early with thunderstorms developing in the afternoon. High 74F. Winds SSE at 5 to 10 mph. Chance of rain 80%.