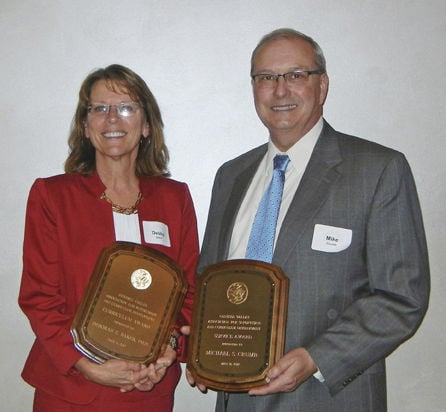 His name might be the only one on the plaques he was awarded from the School Administrators Association of New York State and the Brighton Rotary, but Mark Kokanovich knows winning those awards was no solo effort.

Kokanovich, who has served on the Brighton Central Board of Education for 12 years and has spent the last eight as its president, was named the SANNYS’ Region 11 Friend of Education. The award is presented annually to an adult without teacher or administrator certification who has rendered exceptional service on behalf of education. Region 11 encompasses the counties of Livingston, Monroe, Ontario, Seneca, Wayne and Yates.

“When I got the phone call notifying me I was the winner I was shocked,” Kokanovich says. “I asked if they were sure there wasn’t somebody else. It’s a great honor for me, but this award is more a credit to all the talented people I’ve been fortunate enough to work with. There have been a lot of great people on the board.”

Kokanovich, who has two daughters with his wife, Jean, says he moved to Brighton nearly 25 years ago, in most part, for the schools. He soon became active in Brighton Central School District by volunteering in his daughters’ classrooms and coaching youth sports. Knowing his background of volunteerism with the district, a few of Kokanovich’s friends suggested he apply for the board of education when a vacancy arose.

“I love the community, and after people told me I should do this I decided to apply and I was appointed,” Kokanovich says. “It’s very rewarding, and I work with a great group.”

Twelve Corners Middle School Principal Rob Thomas nominated Kokanovich for the SANNYS Award because he continues to be impressed.

“I attend almost every board of education meeting in Brighton and witness firsthand how Mark keeps students in the forefront of all decisions as he presides each evening,” Thomas says. “I am lucky to call Mark a colleague, friend and neighbor.”

Less than two weeks later, Kokanovich was back at the podium accepting another award. This time it was from the Brighton Rotary Club who selected Kokanovich as its Citizen of the Year during the organization’s 60th anniversary celebration.

In addition to his work on the school board, Rotarians also lauded Kokanovich for serving as a board member on the Wilmot Cancer Institute and Pancreatic Cancer Association of Western New York. Despite all of his volunteer work, Kokanovich says he was “flabbergasted” when he received a call from Rotary Club member Ned Green informing him he was selected as the Citizen of the Year.

“I said ‘Are you kidding?’” Kokanovich says. “It means so much to me to receive this award because it was community members who nominated me. My family loves Brighton, the community and the district. I’m proud to be a part of many great groups and work with such great people.”

“Mark is a phenomenal supporter of education and leader,” she says. “He brings great perspective to the board. It’s great that he was recognized.”

Like Kokanovich, Baker is no stranger to recognition, having received Genesee Valley Association for Supervision and Curriculum Development’s Curriculum Award.

The award is given annually by the GVASCD to the professional who best demonstrates leadership in curriculum areas pertaining to change and training and exhibits awareness and sensitivity toward assessment, implantation of standards, inclusion and multiculturalism.

Nominations come from fellow professionals in the educational field, which made the honor even more special for Baker.

“Knowing this came from my peers makes me so proud and honored,” Baker says. “I’m fortunate to be surrounded by a great group that is committed to preparing kids for life.”

A release issued by the GVASCD stated Baker’s work in the Brighton Central School District “exemplifies each of the GVASCD criteria for the Curriculum Award.”

“Debby relishes the multicultural fabric of Brighton and looks for ways to meld this strength into discussions about curriculum,” the release says. “Debby works to improve the educational program for every student in her district’s care.”

Baker, who came to Brighton Central in 2007 after six years in the Le Roy Central School District, says the award is one of the most important she has received.

“Throughout my career I’ve received other honors but this one is definitely up there,” she says. “It’s hanging up in my office now. This honor means so much to me.”