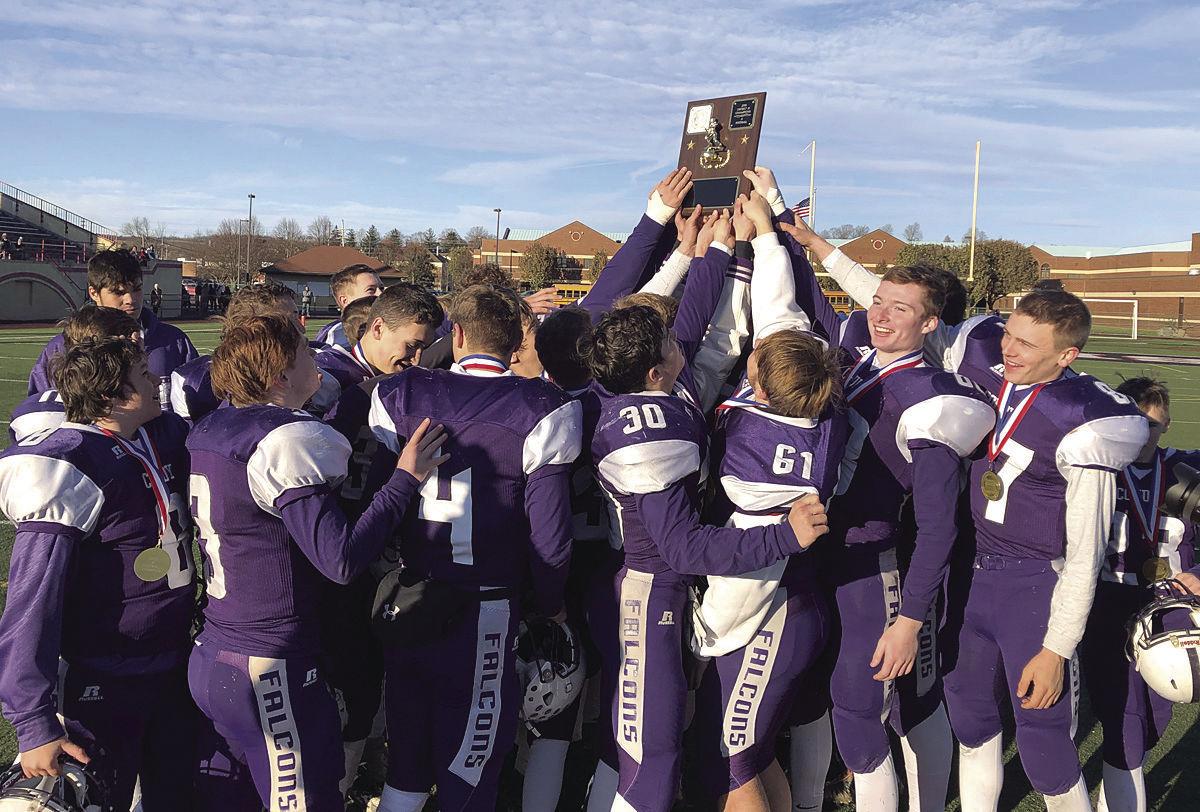 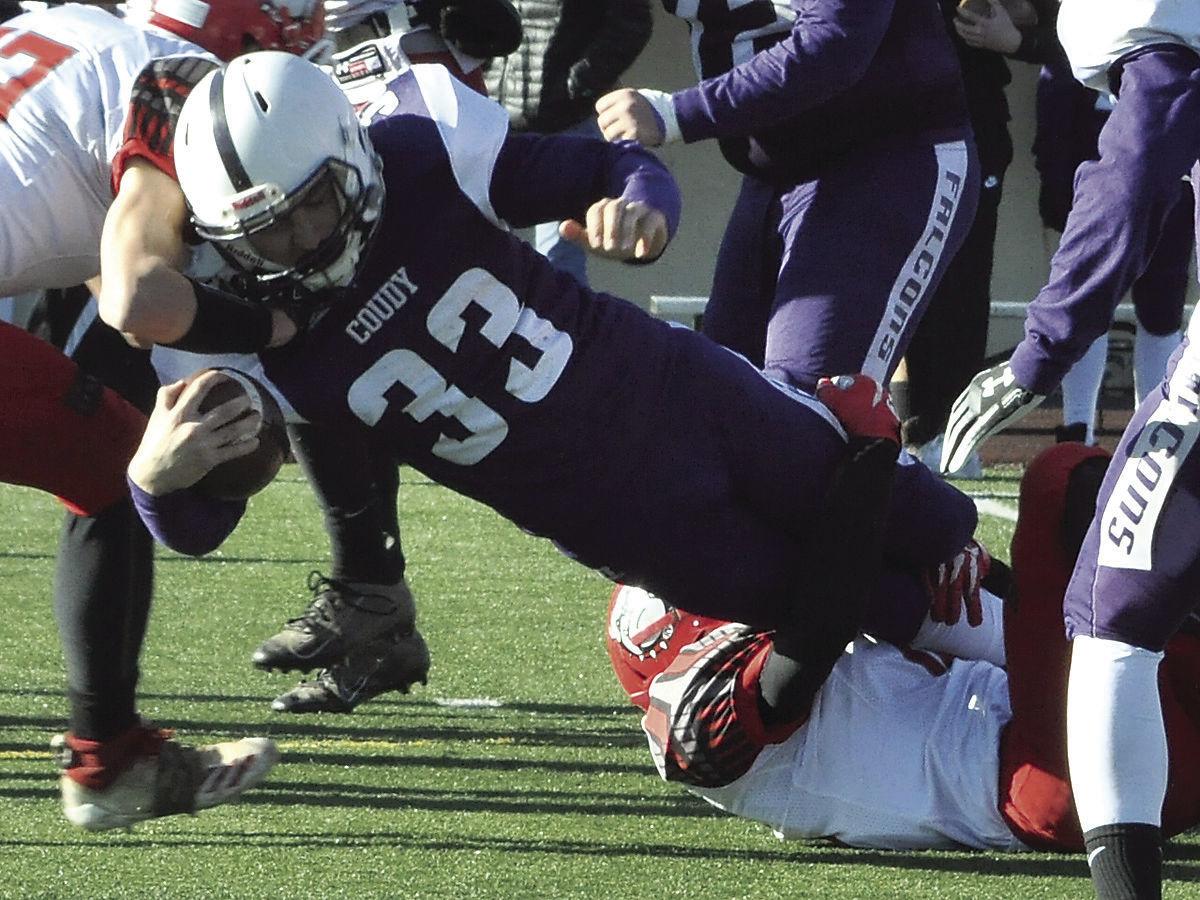 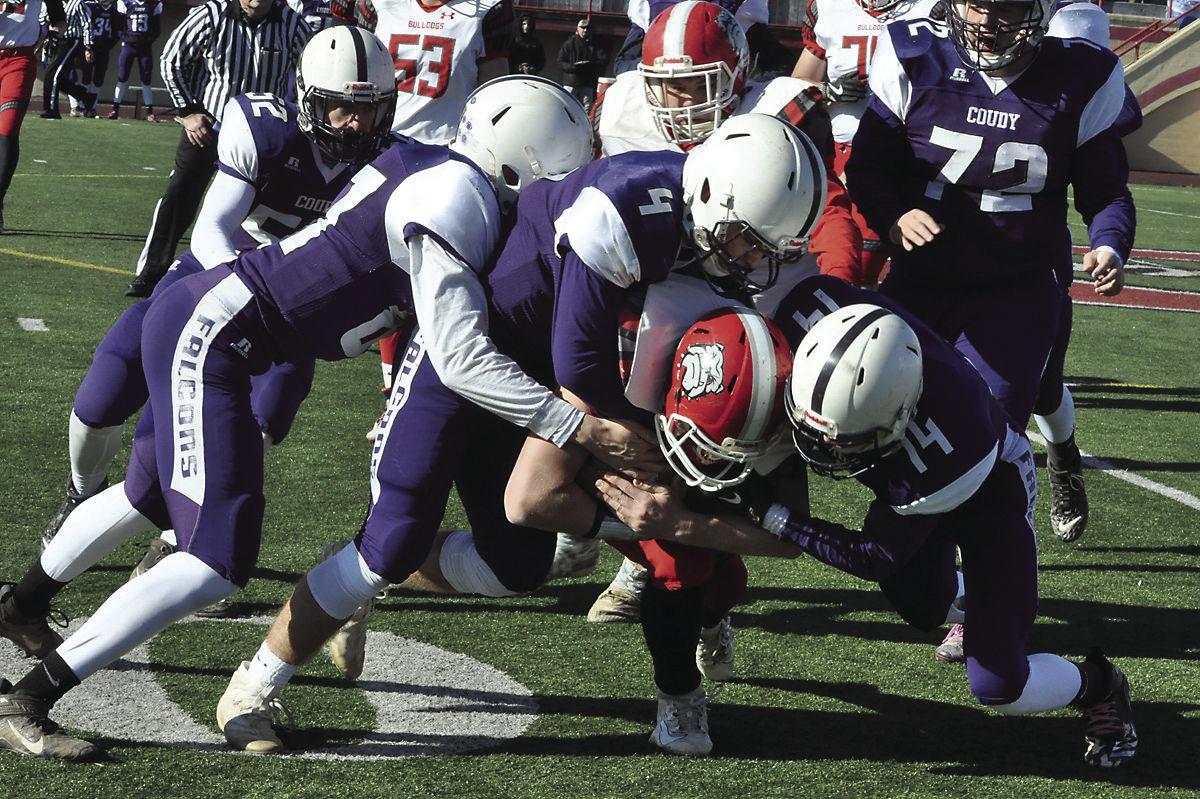 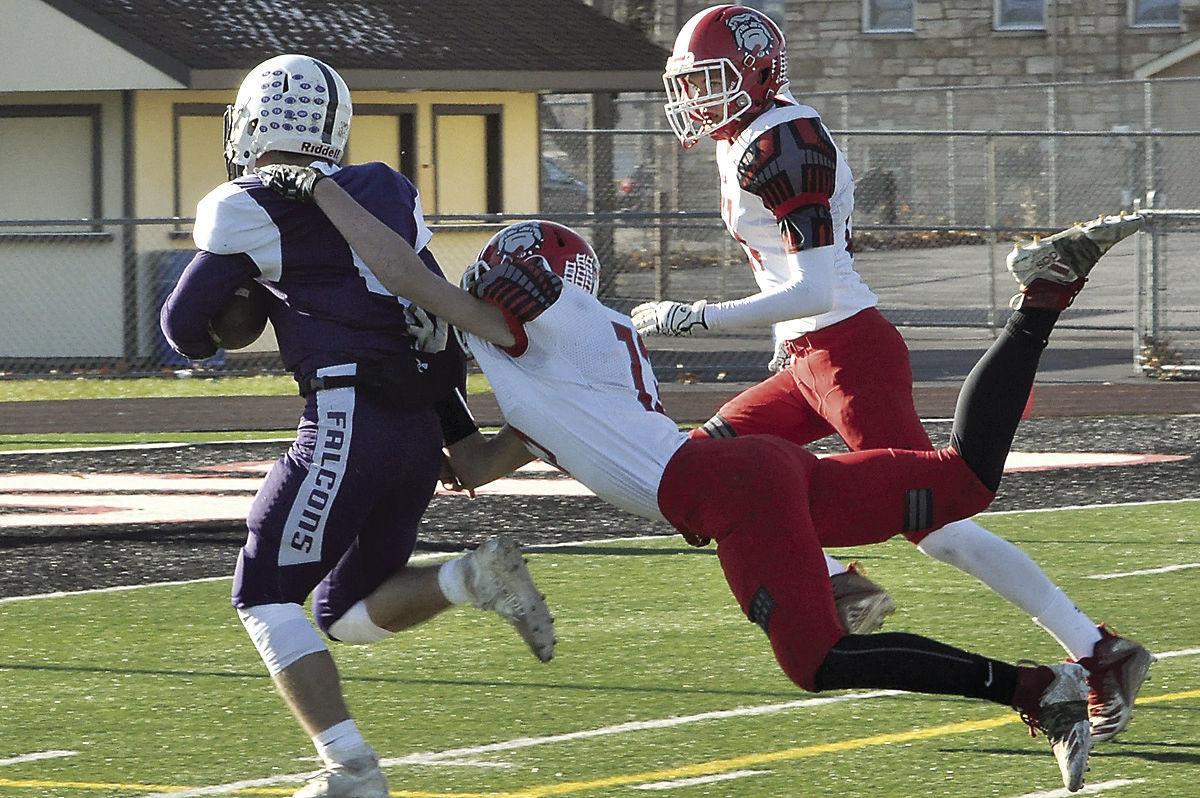 DuBOIS — For three quarters, the rematch had little resemblance to what the scoreboard showed the last time Coudersport and Redbank Valley played in mid-October.

From a 56-0 rout of the Bulldogs last time to trailing 7-6 going into the fourth quarter in Saturday’s District 9 Class A Championship, the Falcons went to work. And boy, did they ever. Four unanswered touchdowns to start the fourth sparked the Falcons to a 36-point quarter and a 42-13 win over the Bulldogs for their second straight D9 title at E.J. Mansell Stadium.

Last year, the No. 5-seeded Falcons ran through their revenge tour in the playoffs for their first title since 2006. This time around, they ran the table.

“It’s what we’ve been working for as coaches to build the program up,” Falcons head coach Tom Storey said. “This senior class has had a lot of success, so to do what they’ve done and to capitalize on that is a big thing. Building the program, the culture as I’ve always called it, has been a big thing. It feels good to have these guys undefeated and win the district title and go from there is nice.”

The rematch wasn’t as easy for the Falcons, for sure, until late. Redbank Valley (9-3) got a turnover on the Falcons’ second possession of the game when Chase Bish intercepted Hayden Keck at Falcons’ 24. Seven plays later, Kobe Bonanno bulled into the end zone from one yard out for a 7-0 lead.

Three plays later, Austin Leasure intercepted Keck again and his return gave the Bulldogs the ball at the Coudersport 32. However, the Bulldogs were stopped on downs at the Falcons’ 9.

Redbank Valley took just one snap the rest of the game in Falcons territory, scoring its second touchdown with Coudersport safety in front in the fourth quarter on receiver Ethan Hetrick’s 73-yard TD pass to fellow receiver Sam Hetrick.

“We gave them a short field with the interceptions and that was it,” Storey said. “They capitalized on just one luckily. It could’ve been worse at the half at 14-0.”

The Bulldogs, who lost starting quarterback Cam Wagner to a shoulder injury late in the second quarter, managed 200 yards and just six first downs. Of their 117 yards in the second half, 73 came on the Hetrick to Hetrick combo.

“We kind of had the mindset that we had to score three times today and the defense did a phenomenal job from the first and even into the third quarter,” Bulldogs head coach Blane Gold said. “But we were just so limited. Kobe is the third quarterback we’ve used this season and it just completely limited everything that we wanted to do. When you have a freshman quarterback, you devote much time to get reps with him that you just don’t have enough time to rep with other guys and we were one-dimensional.”

Amazingly, Coudersport put up the same exact yardage total as its first game with 373. But how it amassed that number was quite different. The Falcons had 68 yards and five first downs in the first half and 236 yards alone in the fourth quarter.

Brandt Kightlinger ran for 108 yards on 13 carries with a touchdown, Dylan Kelly gained 81 yards on eight carries with a TD and Keck, who didn’t throw a pass in the second half, ran for 53 yards on 14 attempts. He fumbled short of the goal line on another scoring play with teammate Kolby VanWhy falling on it in the end zone for another touchdown. Jacob Pitcher, on his only carry, raced 52 yards for a TD as well.

“They came out and played us hard right off the bat and that’s what they’re supposed to do,” Storey said. “I told our boys that’s what they were going to do. I don’t know if they showed up against us in the regular season or whatever it was that happened, but we knew they’d show up and it was a good fight. But that’s the way we practice and worked all summer and all year long is to own that second half. They came and did it.”

All of Coudersport’s scoring with the exception Keck’s first TD on a 22-yard run on the first drive of the second half came in the fourth quarter.

The Falcons’ leading rusher for the season, Travis Gleason, returned to the lineup against the Bulldogs after missing the past two games and left with another injury in the second quarter and finished with 15 yards on eight carries.

But that was the first half and the Falcons, while continuing to bottle up the Bulldogs offense, began to get some offensive momentum with their other options. Keck’s 22-yarder capped a 7-play, 50-yard drive to start the second half. John Minor’s 30-yard kick return started the Falcons at midfield.

A Bulldogs’ three-and-out on their first drive of the second half was followed by a turnover on their second possession as Minor picked off Bonanno and following his 24-yard return and 11-yard Bulldogs personal foul penalty.

Four Falcons plays covered 11 yards and the Falcons took the lead for good at 14-7 nine seconds into the fourth quarter when VanWhy fell on the loose ball in the end zone on a four-and-two run from the 3 by Keck.

“That was a killer,” Gold said of the interception. “We had miscommunication and some guys not on the same page and it turned the tide for everything.”

Recovering a Bulldogs fumble at the Redbank Valley 28 on the next drive, the Falcons cashed that in three plays later on Kelly’s 19-yarder. Another three-and-out Bulldogs possession was followed by another Falcons score on Pitcher’s 50-yard dash to put the Falcons up 28-7 after Pitcher’s two-point run with still 7:33 left in the game.

The Falcons weren’t done. The Bulldogs fumbled the kickoff, setting up Kightlinger’s 2-yard TD run four plays later. The Bulldogs struck quickly on their next offensive play on the Hetrick-to-Hetrick 73-yarder. But the Falcons answered one more time three plays after the ensuing kickoff with Keck’s 6-yarder to complete the game’s scoring with 3:56 remaining.

Overcast with rain showers at times. Temps nearly steady in the mid to upper 30s. Winds SW at 10 to 15 mph. Chance of rain 40%.