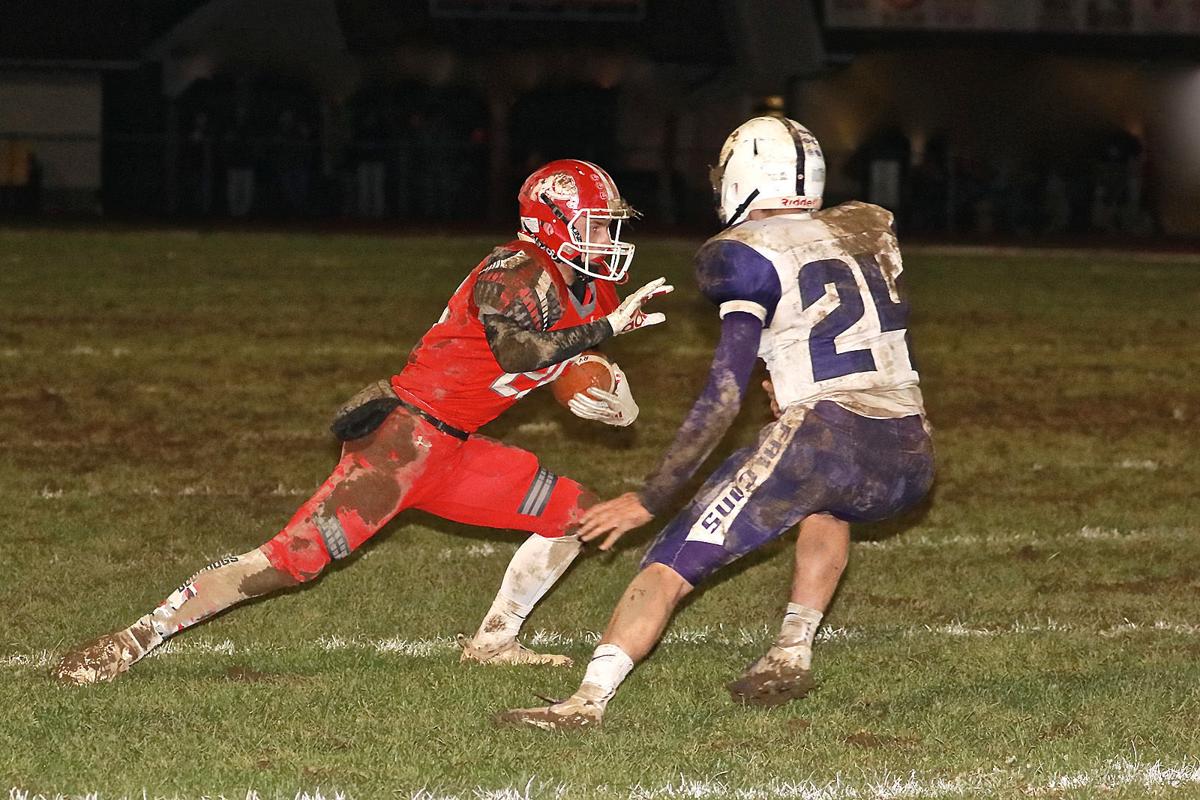 Kolby VanWhy looks to block Redbank Valley during the playoff game on Friday. 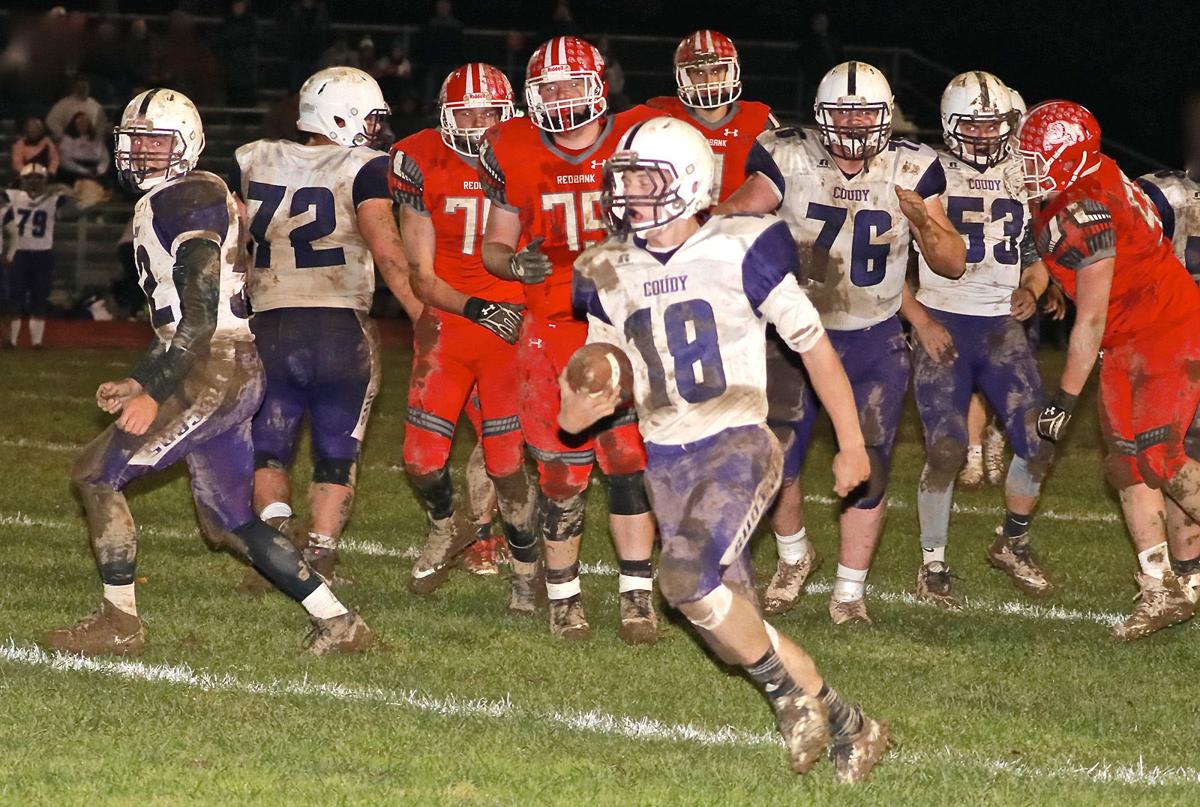 Senior Stephen Kelly runs the ball during the playoff game against Redbank Valley. 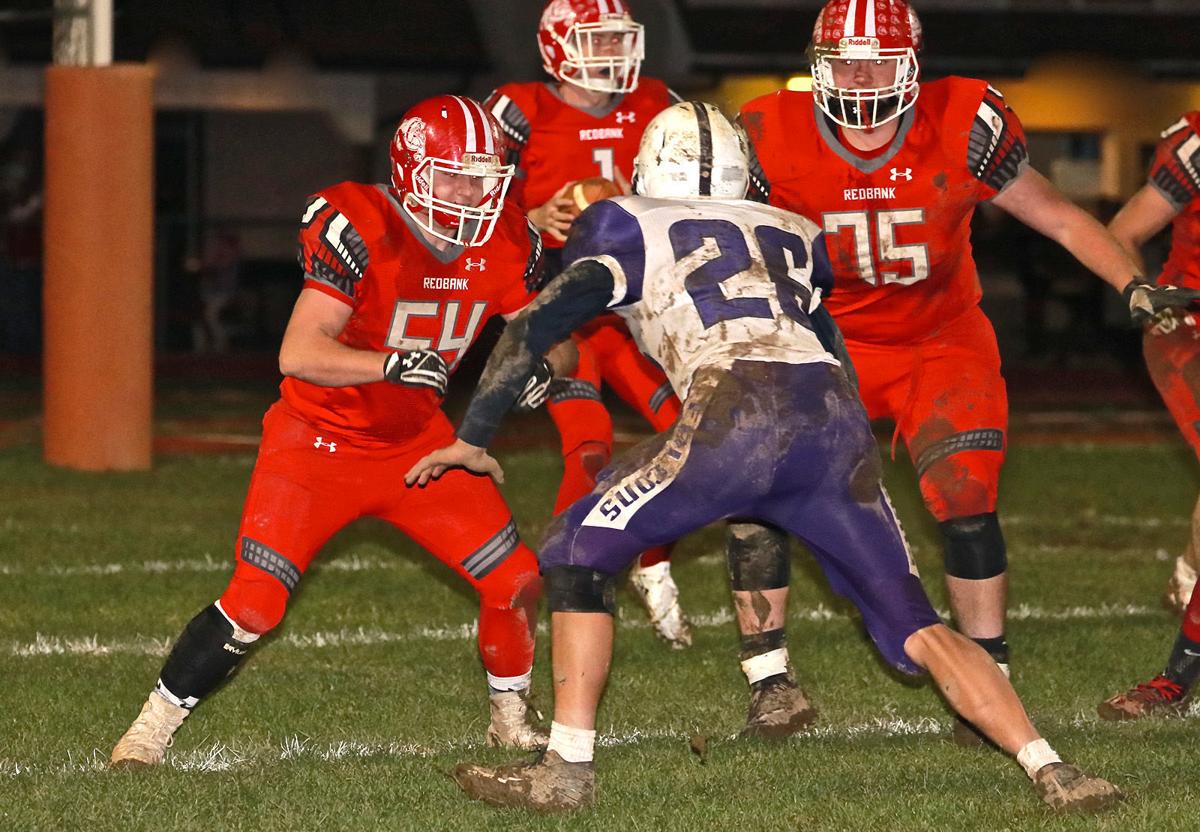 Kolby VanWhy looks to block Redbank Valley during the playoff game on Friday.

Senior Stephen Kelly runs the ball during the playoff game against Redbank Valley.

NEW BETHLEHEM – On Oct. 12, the Coudersport Falcons traveled down to New Bethlehem, but by the end of the night, they went back home without a win, losing 41-27 to host Redbank Valley. Three weeks later the two teams would face off again, this time in the opening round of District 9 playoff action. Circumstances were different and ultimately, so was the outcome.

On Friday night, Coudersport (7-4) rolled to a 52-7 bludgeoning of the Bulldogs (7-4). Coudersport head coach Tom Storey believed his team could redeem itself going into the rematch between the two squads.

“I don’t know if we just had a little stigma with the Southern teams,” Storey said. “It’s something that’s been built from the AML the last few years when the South kind of always has that stigma. We saw them three weeks ago, and we’ve been telling our guys all week long, ‘you guys come to play, you guys can own them.’ And they stepped up. They did an awesome job.”

The victory was due in large part to a superb performance from Coudersport’s Stephen Kelly, who followed up a 20 carry, 171 yards and four touchdowns performance in the first meeting with 238 yards and another four TD’s in Friday’s mud soaked game.

The game’s first score came on Coudersport’s opening possession. After forcing the Bulldogs to punt to start the game, the Falcons started on their own 33. A 16 yard Kolby Vanwhy rush was followed by a 51 yard Stephen Kelly touchdown scamper two minutes in. Vanwhy added the two point conversion run and Coudersport gained a quick 8-0 lead.

Going three and out on their next drive, Redbank Valley punted, setting Coudersport up at midfield.

Kelly would run eight times, toting the ball for each play of the second Coudersport drive. Kelly punctuated the sequence with a 25 yard run and score with 3:33 left in the first quarter.

Redbank Valley took the ball at their 37 on the kickoff following the score. Hunter Buzard and Hunter Wiles used five runs totaling 31 yards as well as penalty yardage to set up the Bulldog offense at the Falcon 26. On first and five, Keaton Kahle looked to the right sideline and fired a pass into the back corner of the end zone, where Ethan Hetrick had a step on the defender and made a diving catch for the touchdown with 36 ticks left in the quarter. A Kristofer Shaffer point after cut the Falcon lead in half, 14-7.

Kelly would return the subsequent Bulldog kick past midfield to the Redbank Valley 47. Two plays later, Hayden Keck would pass for a score of his own, finding Brandt Kightlinger for 43 yards ten seconds into the second quarter, making it a two score game once again, 22-14.

Keck found John Minor his next time under center later in the quarter, this time for a gain of 35. After a holding penalty put the Falcons back at the Bulldog 18, Stephen Kelly took the handoff from Keck and found pay dirt once again, making it 28-7 with 7:15 left in the half.

The Falcons would force another punt on Redbank’s ensuing possession. From their own 19, the Bulldogs punt traveled only 9 yards and a savvy pickup of the ball by Coudersport’s Dillon Keglovitz netted a 3 yard return as no Bulldogs were initially near him.

A three yard run by Kelly was followed by a Keck throw to the end zone which drew defensive pass interference. Keck would run for six yards to the Bulldog 5, where Kelly pushed in for another rushing score, putting the score at 34-7 with 4:27 left in the second.

Although Keck finished just 3-for-6 with 87 yards through the air, Storey said it has been a matter of marked growth for the sophomore signal-caller.

More solid field position for the Falcons came, as Jacob Pitcher picked off a pass and returned it five yards to the Bulldog 45. Four rushes by Kelly put the ball at the three, where Heck ran in himself with just under a couple minutes remaining in the half. At the half, the teams went into their respective locker rooms with a 40-7 score.

The Bulldogs forced a turnover on downs for the opening drive by the Falcons coming out of the half. Redbank Valley was unable to do anything with it, though, as three consecutive incompletions during the possession forced them to punt.

Rushes of 26 and 18 by Kelly helped propel the Falcons from their midfield start to just inside the Bulldog 10. The run balanced offensive attack utilized it’s tendencies by calling a play-action pass, where Heck found wide open fellow Sophomore Kightlinger, the second time the duo hooked up for a score in the contest. The TD made it 46-7 with 3:19 left in the third, putting the PIAA continuous running clock into effect.

The Falcon defense continued to rise to the occasion in the fourth. Cole Ayers found his way into the Bulldog backfield for a 20 yard sack (Ayers finished with two total sacks on the night). On the next play, Coudersport’s Travis Gleason carefully covered a screen pass, picking it off and returning it to the Redbank Valley five. A Keck two yard score extended the lead to its 52-7 final with 2:15 left in the game.

A final interception, this time by John Minor, sealed the deal for the Falcons, who kneeled away the remaining couple of minutes.

For Coudersport, moving onto the next round of the postseason is just a step in the right direction when it comes to righting previous regular season wrongs.

“We’ve been telling the guys, we’re going to revenge all those losses from the regular season and win a district title on top of it,” said Storey. “That’s what we’re shooting for.”