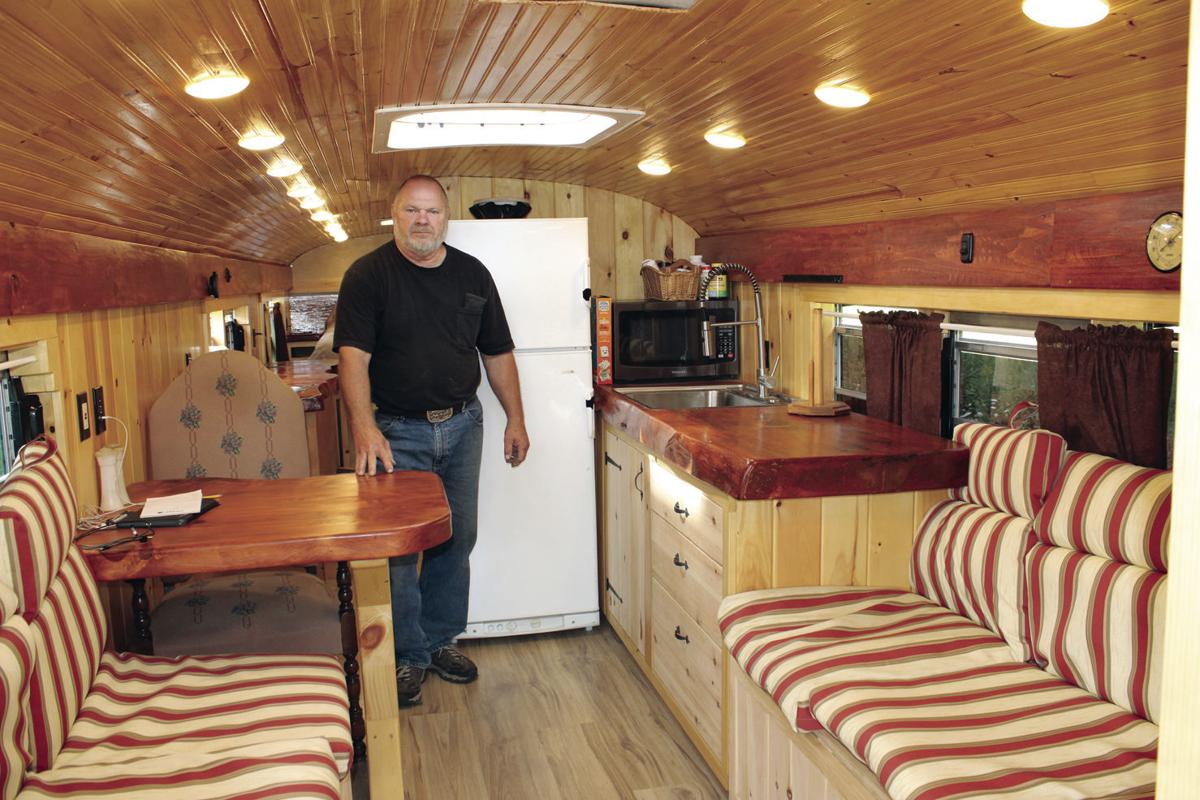 Bob Main stands in The Compass, a school bus he turned into a motorhome. 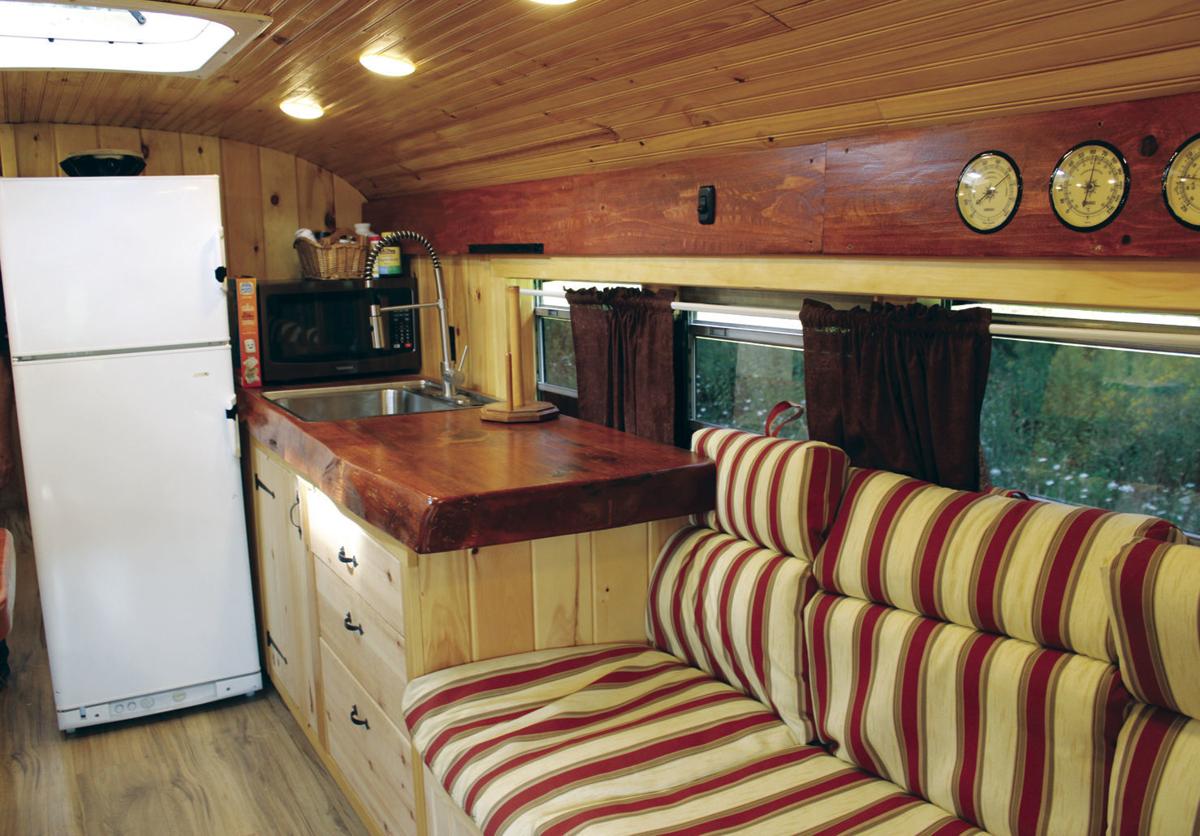 The living area and kitchen of The Compass, a school bus that was renovated into a motorhome by Bob Main. He did all the wood work himself and made the countertops out of a tree that had sentimental value. 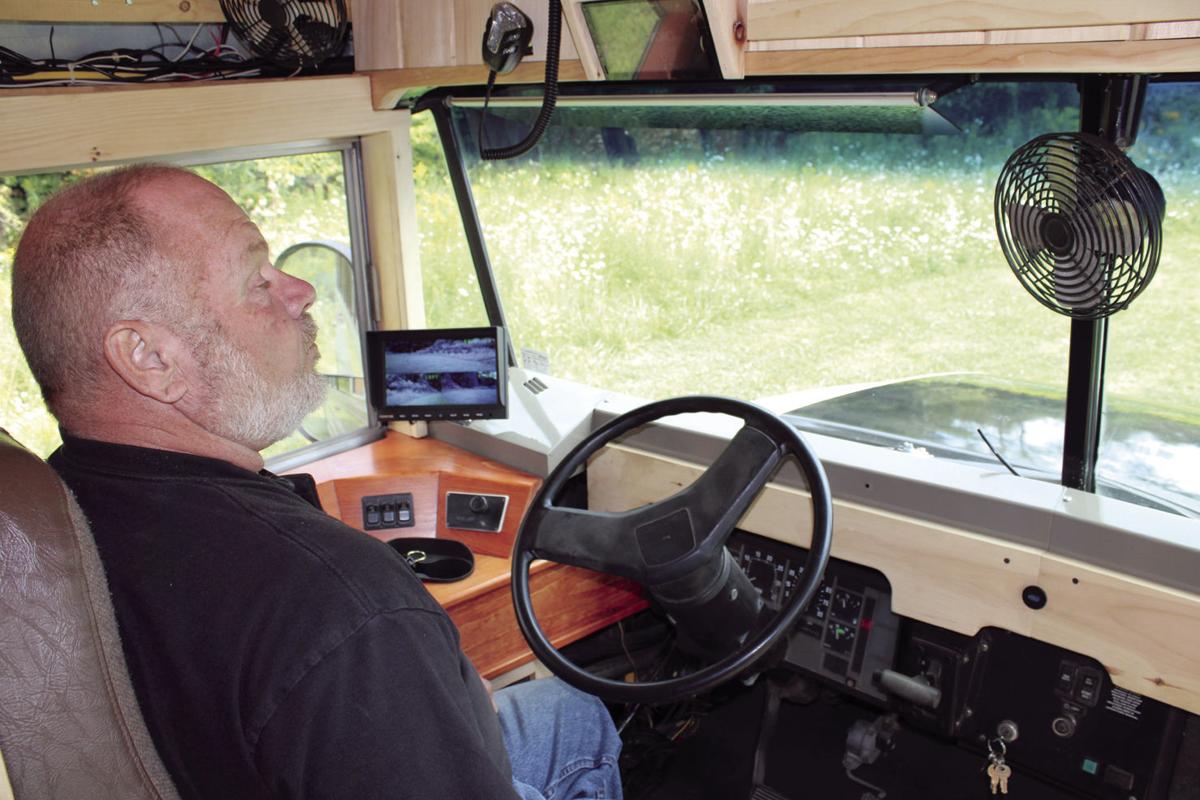 Bob Main sits in the driver's seat of a school bus that he converted into a motorhome. 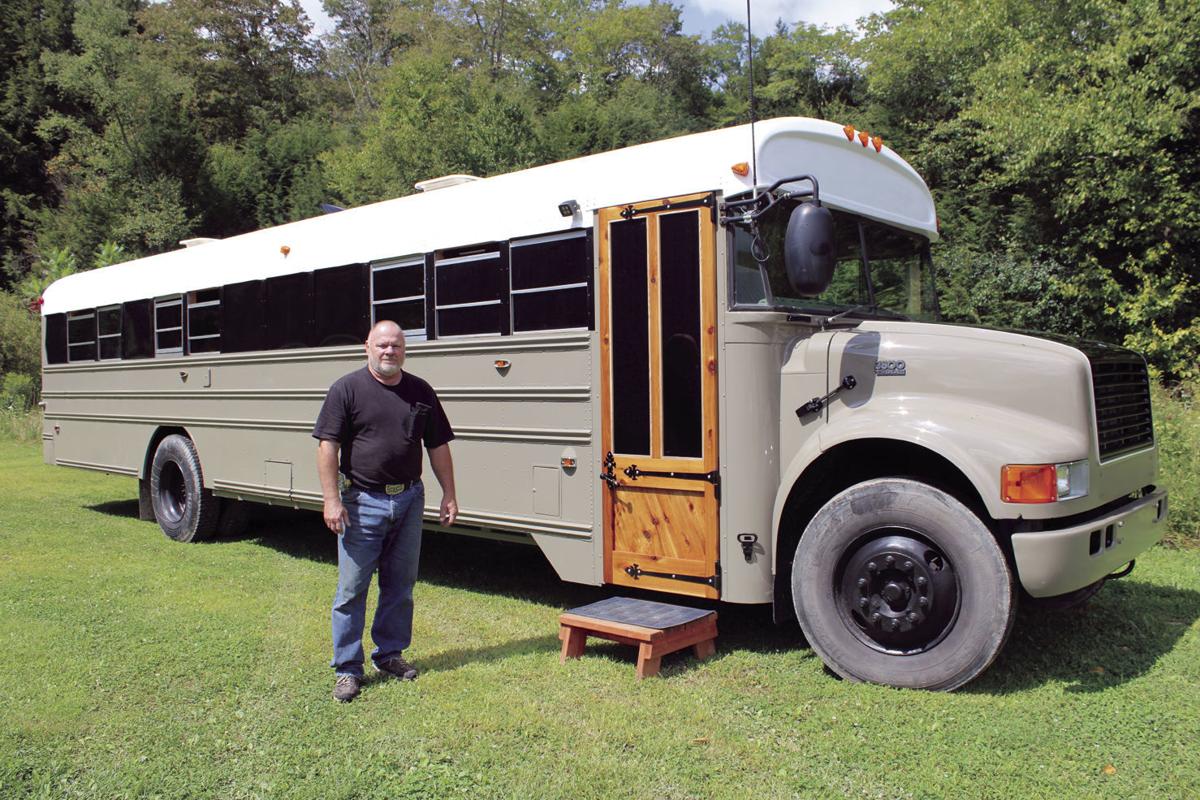 Bob Main stands in front of The Compass, a school bus he converted into a motorhome.

Bob Main stands in The Compass, a school bus he turned into a motorhome.

The living area and kitchen of The Compass, a school bus that was renovated into a motorhome by Bob Main. He did all the wood work himself and made the countertops out of a tree that had sentimental value.

Bob Main sits in the driver's seat of a school bus that he converted into a motorhome.

Bob Main stands in front of The Compass, a school bus he converted into a motorhome.

COUDERSPORT — When Bob Main purchased a school bus in February 2018, his intention was to convert it into a motorhome. He had never done such a task, but was determined to see it through.

“Some things in life changed and I decided I didn’t want to live in an apartment or anything,” Main said. “I have five grandkids out west in Tucson and family all over the country so I plan on going to see them and roam a little.” Main previously lived in Pleasant Valley Township.

When he first bought the bus, it had full seats, lights and cross arms. He took everything off of the outside and removed the seats.

The entire outside of the bus was hand sanded three times before it was painted. Sean Tilley of Street Machines Auto Care helped Main paint the bus grey, using automotive paint.

To get it inspected, Main kept every receipt from the project and meet code requirements. There are eight requirements, and he had to meet at least four, like separate bathroom, separate bedroom with bed and a water system, as examples.

“After I tore it out, I built what was going to be comfortable for me,” Main said. “I didn’t think about any of the end product. It turned out much nicer than I had planned. I wanted a home on wheels.”

He watched a lot of YouTube videos and by October 2018, it was completed enough for him to live in it full time while finishing work.

The motorhome has all LED lighting, on demand hot water, an inverter and converter, two 40-gallon fresh water tanks, a 40-gallon black water and a 40-gallon grey water, like most campers have. The bus has backup cameras, a hitch to tow a trailer or car and plenty of storage.

There is also a TV cable hookup and a 70 amp electric hookup to use at a campground.

Main removed the bus windows and used metal from the ceiling to make window panels. The whole bus has an inch and a half insulation.

He eventually plans to put solar panels on and add two more batteries.

“I’ve been told I’ve taken it to a different level,” Main said. “In the process of that, I didn’t know I was. I’m a wood person, I have a woodshop and I do work with wood, so I put wood in it. It’s not as open and airy as some are, but it fits me.”

Main replaced the tradition school bus door with a solid wood door that he created. The metal work and hinges were made and put on by Rod’s Welding in Coudersport.

When first walking onto the bus, visitors see a typical school bus driver seat. But one step beyond that and they’re met with a home. Benches on both sides provide seating and can slide together to make a queen-sized bed for guests. One side is solid, and the other is hollow so it can be used for storage.

Main lived on a large farm, where he also worked and helped to build the house. In front of the house was a tree that was splitting and needed to come down. He made his counters out of that tree.

“So I took the butt log and had it sawed into four-inch slabs and it’s like taking a piece of the farm with me,” Main said.

On one counter, there is a microwave. He also has a propane grill, but Main prefers to just put a woodfire together and cook that way.

The motorhome has a refrigerator that fits perfectly in the space. Main said it’s 19-years-old, but has never been used. When Main mentioned he was looking to buy one, his friend gave it to him.

Toward the back of the bus is a bathroom with a functioning shower and toilet. The sliding bathroom door is made out of the same wood used on the walls.

Main’s bedroom has a queen-sized bed with drawers on each side. There are USB plugs on either side of the head and a TV cable hookup. He wasn’t sure if he wanted to put in a TV, as he doesn’t watch it much, but thought other people might.

“If somebody else owned it, they might want it,” Main said. “So I put it in, or in case I get old and feeble and want to watch it. There’s too much to do to just sit around and watch TV.”

Main had a lot of help from his son, Robert, of Emporium. It was a real bonding experience, Main said.

He’s also going to visit family on his way to Arizona. He has 11 siblings and plans to see all of their families.

Although the renovation is never ending, Main is content with what he has at the moment. He doesn’t see himself ever selling it, as he built it to his comfort and has a lot of personal touches, like the wood.

“But I wouldn’t mind building someone else one, or helping someone,” Main said.

Main plans to take his motorhome to a couple shows, including a tiny home festival in San Antonio, and some bus conversion festivals.

For the first week, he’ll be travelling in four-hour trips. He’s visiting a lot of family and plans to take his time.

“I’m going to stop and stick my big toe in the Mississippi. I’m going to take the time. I’m not going to hustle,” Main said.

2019 in review: The paper's top stories of the year

COUDERSPORT — This past year, the Potter Leader-Enterprise had a nice mixture of heavy news and fun features. Here are some of the top stories…