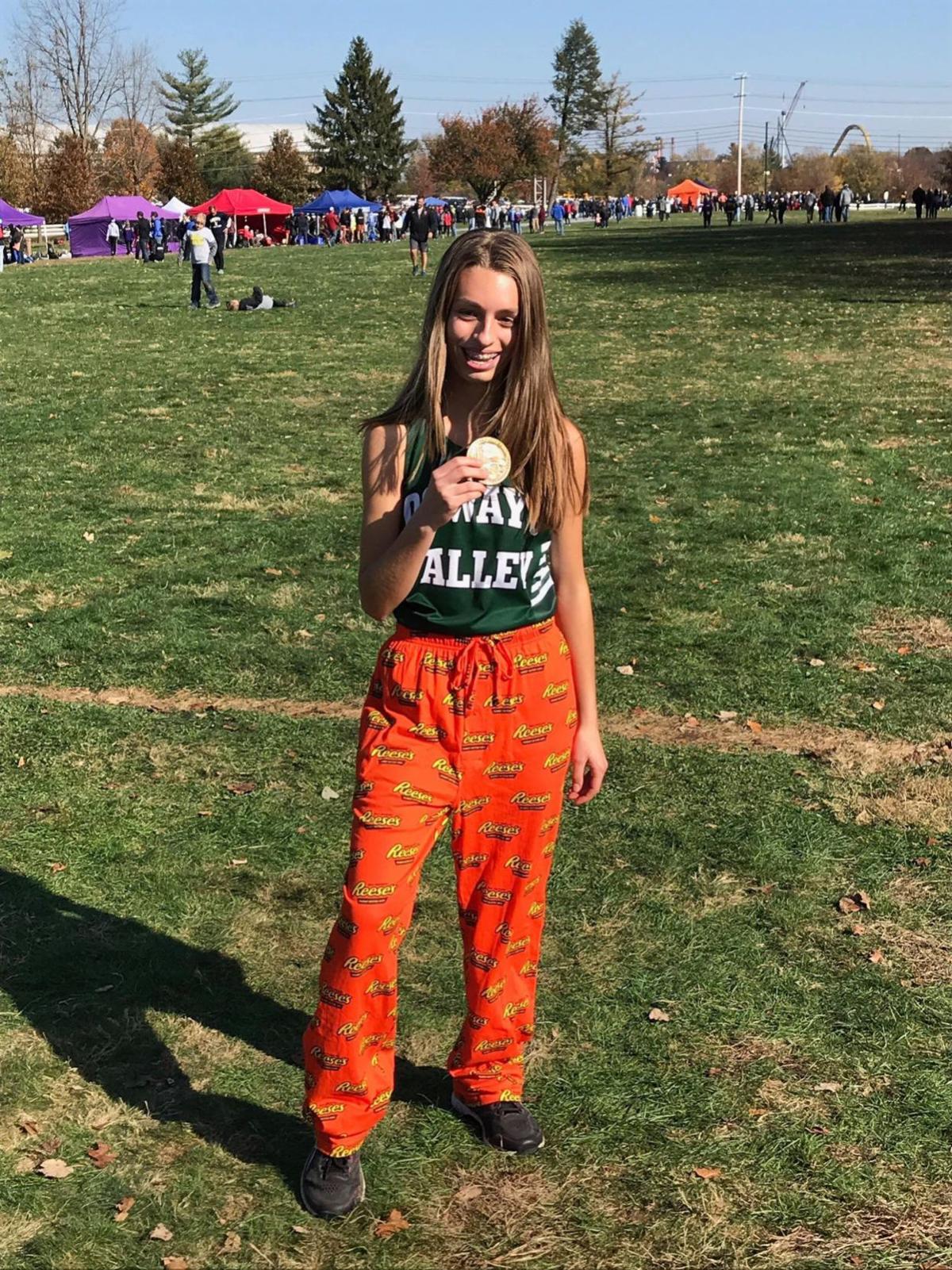 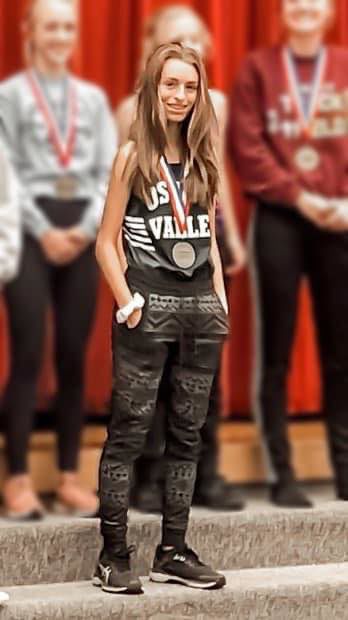 SHINGLEHOUSE — Cheyenne Mehl, a freshman at Oswayo Valley, placed first in the 1A district 9 championship cross country race with a time of 20:18, making her the first female from the school to do so.

“I kind of went into it thinking, ‘I’m just going to run it and do good,’ but at the same time, deep down, I knew I had a shot at winning this,” Mehl said. “The whole time I had it in my head that I needed to make sure I stayed out ahead of everyone.” She said she was aiming for a low time, and while her time wasn’t as low as she expected, it was still better than her usual times.

“She knew going into it that if she won, she would be making OV history … she was 100% prepared and knew what she had to do,” Hoffman said. It was helpful the course is a course she already competed on in the Ridgway Invitational, where she placed second. The runner who beat Mehl wasn’t in her class.

“Although anything can happen at the district race, we got a good feel for what she could do and where she could be; and what we needed to run in order to be district champion,” Hoffman said.

Mehl said as soon as she finished the race, she collapsed.

“My first reaction was to fall down. I don’t remember them picking me up, but apparently they did,” Mehl said. “I just kind of like, stood there in shock and everyone started coming around me and I was like, ‘Oh my gosh, I just won. This is crazy.’”

Hoffman said she had tears in her eyes.

“It was just emotional,” Hoffman said. She and her husband have coached cross country for 13 years years.

“We’ve had male district champions before, but she was the first female,” Hoffman said. “It’s hard to recruit in a school that has such a great volleyball program, so it was nice to have a win from a girl.”

When the team arrived back at Shinglehouse, a police and fire escort was arranged through a very supportive parent group, Hoffman said.

“I just think I’m so blessed to be put in such a good position and also the support that I get from coaches and family, it’s really nice,” Mehl said.

Mehl was also a state medalist, coming in at 22nd place.

“Which is amazing as a freshman, a lot of times freshmen don’t even get to compete at states,” Hoffman said.

“Going to states, that was definitely humbling. There was just so many people in the same or better level of experience than I have.” The state race was a little different from other races for Mehl, because it was so compact.

“Letting up a little bit at the end would have cost her the medal,” Hoffman said, as the top 25 get medals. But on the other hand, one second faster would have landed her in 16th place.

“Not to sound conceited, but usually I am in the front, so I don’t get the energy of all these other people around me the entire time, so it’s definitely different,” Mehl said.

Alec Peinkofer, director of student activities, said everyone is extremely proud of her and appreciate her dedication and effort.

“For being so young, she runs such smart and gutsy races. I am excited to see her continue to improve and keep the love for running strong at OV,” Peinkofer said.

Mehl started cross country in eighth grade, but always had some interest in it. She has some runners in her family — her dad, an aunt and a cousin — so it came naturally to her. Though she didn’t participate in cross county, she was on the track and field team in seventh grade.

Her very first cross country meet she competed in eighth grade, she said she was “freaking out” before the race started and told her coach, Jennifer Hoffman, she’d be happy if she placed in the top 100. She came in 14th.

“I think it started there, when I realized, ‘Hey, I can go somewhere with this,” Mehl said.

Starting this season, she said she was a little nervous because she would be competing at the varsity level and wasn’t sure what to expect. Plus, she was the only varsity girl on the team.

Throughout the season, Mehl was a medal winner in all of the invitationals and placed first in all but one of the mega meets in the area.

The McQuaid invitational they competed at in Rochester, N.Y. is the biggest invitational east of the Mississippi River, and Mehl placed sixth in her small school race, which was against around 300 girls.

Mehl’s goals for next season is to focus on breaking course records and to keep up with what she’s doing now.

Hoffman said the Oswayo Valley course record is 19:51 and she would love to see Mehl break that as a sophomore.

The Oswayo Valley cross country program all around had an impressive season. Brevin Austin, …

A few highlights from the past year in local sports.