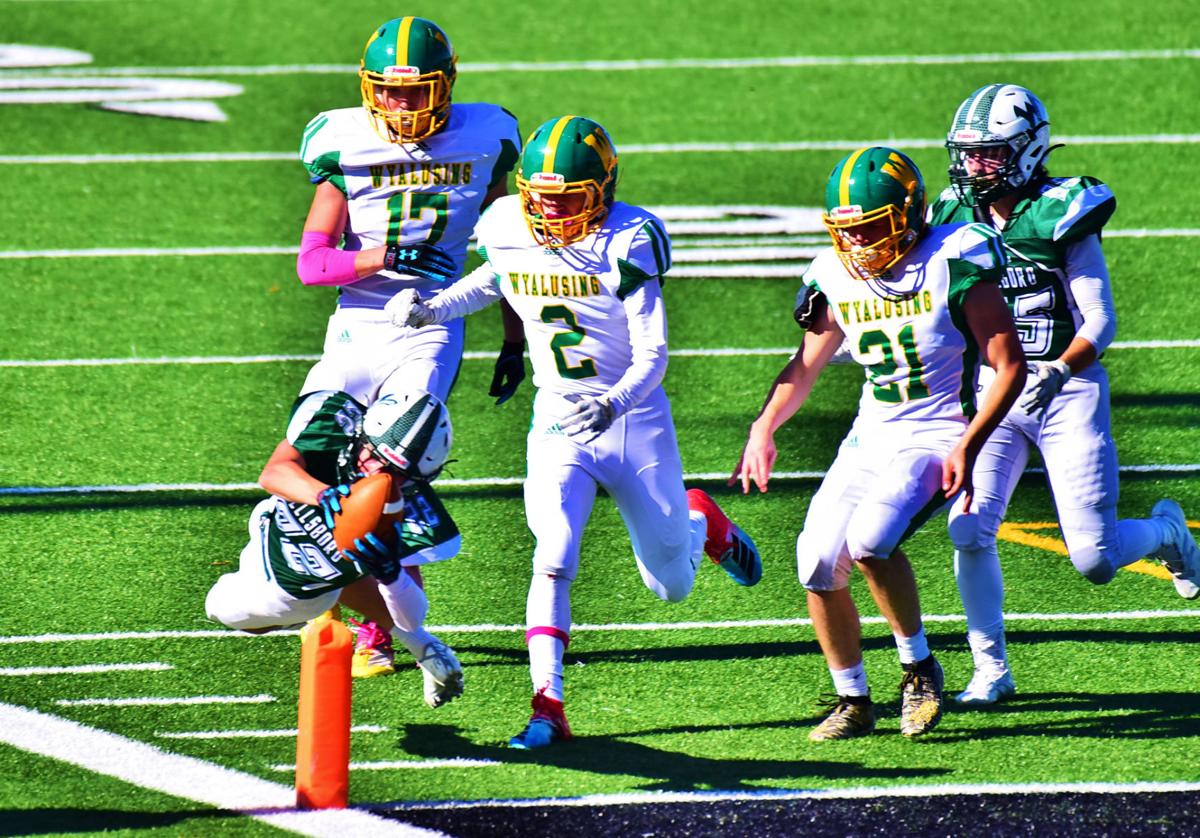 Darryn Callahan dives inside the pylon for a touchdown in the Wellsboro Hornets big 48-14 win over the Rams. 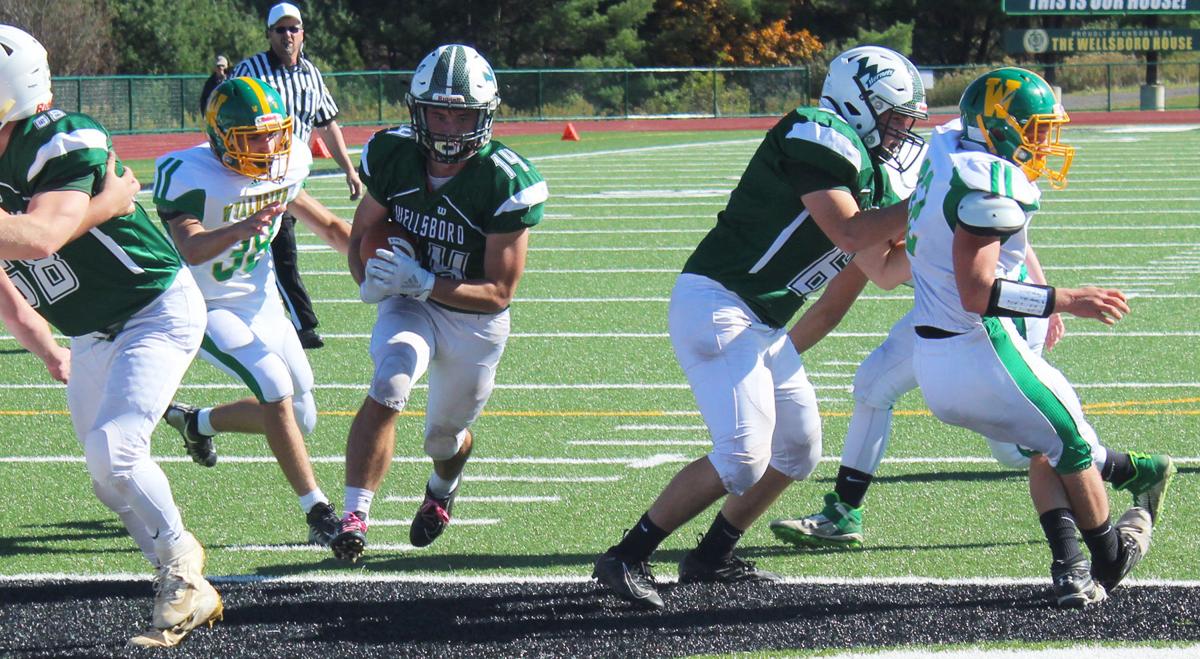 Alex Burrell scores a touchdown on a one-yard run in the second quarter of the Hornets 48-14 win against the Wyalusing Rams.

Darryn Callahan dives inside the pylon for a touchdown in the Wellsboro Hornets big 48-14 win over the Rams.

Alex Burrell scores a touchdown on a one-yard run in the second quarter of the Hornets 48-14 win against the Wyalusing Rams.

The Wellsboro Hornets offense continued to play at a high level in another big win of 48-14 against the Wyalusing Rams this past Friday. The Hornets have scored over 40 points in each of their last seven games fueling them to 7-0 record in that span.

The Hornets offense came out of the gates a bit rocky, turning the ball over on their first two drives with interceptions that stalled out drives that had moved into Rams territory.

The Hornets coughed the ball up four times in the first half but the defense continued to hold strong as they have all season, and didn’t allow much running room for the Rams through the first quarter.

Late in the first, senior running back Aiden Hauser left the game with a foot injury, meaning the Hornets were going to need the rest of the running back group to step up and make plays.

They were more than ready for the opportunity. Soon after quarterback Isaac Keane found reciever Jacob Trowbridge wide open across the middle for a big play that got the Hornets down inside the five to end the first with excellent field position tied at 0-0.

Moments into the second quarter, running back Logan Henry plowed through the defensive front thanks to some powerful offensive line play, to break open the scoring and put Wellsboro ahead 7-0 early in the second. The defensive effort from the Hornets front seven continued on the next drive, forcing yet another punt, and regaining possession.

The Hornets drove down the field with the help of their running back core and punched in another one-yard touchdown by Alex Burrell to give the Hornets a two touchdown lead early in the second quarter. Moments later, the Rams unloaded an imperative touchdown pass deep down the left sideline that went for 74 yards to give the Rams their first score of the game.

Neither teams were able to score before the first half ended, with the Hornets up 14-6 with two quarters left to play.

The running game continued to roll for the Hornets in the third, with Darryn Callahan handling a majority of the work, scoring back-to-back touchdowns for the Hornets from three yards out and another from 36 yards out.

Keane connected with Burrell to close out the scoring in the quarter and the stingy defense of the Hornets continued to strangle the running-game of the Rams, and held them scoreless in the third to bring the score to 35-6 with only one quarter left the play.

In the final quarter, another running back for the Hornets shined, with freshman Conner Adams making the most of the fourth quarter touches, scoring a touchdown on a ten-yard run and a second touchdown on a nine-yard run. The Rams scored on one last deep heave from 84 yards out, but the game was already in hand for the Hornets.

The real star of this performance was the guys up front for the Hornets. A lot of teams would fold when their running back goes down early, but everyone in the stands could tell, the offensive-line play of Danny Timmons, Carson Davis, Tyler Hancock and Keegan Clemens was absolutely phenomenal giving running lanes for the Hornets that could fit a small car.

They stepped up in a major way and are the main reason the Hornets were able to rush for 508-yards during the contest.

On the opposite end, the defensive front seven was equally impressive in the contest, the Hornets held the Rams to negative yardage in the contest, forcing them to throw the ball all afternoon long.

The running game was full of contributors in this contest, with 11 Hornets recording carries, four Hornets with rushing touchdowns and eight with over 25 yards rushing in the contest.

The defense was once again led by Clayton Orsborn and Tyler Hancock who both racked up five tackles while Orsborn was able to record the only sack in the contest for the Hornets. Wellsboro only allowed 224 yards in the contest and have been outstanding this season, holding opponents to just under 16 points per game and only 13.4 points per game during their current seven-game win-streak.

Offensively, Wellsboro has been the top team in the NTL as well, scoring over 40 points in all but one game this entire season, and topping the 50 points mark a jaw-dropping four times. They average 49.5 points per game and outscore opponents an average of 36 points per game so far this season.

The Hornets have one game left on the schedule this year, as they travel to Blossburg to take on their rival team of the North Penn-Mansfield Panthers at 7p.m. on a Friday night showdown. The Hornets will look for their eighth straight win and reclaim the Morton F. Jones Trophy after falling to the Panthers this last season.