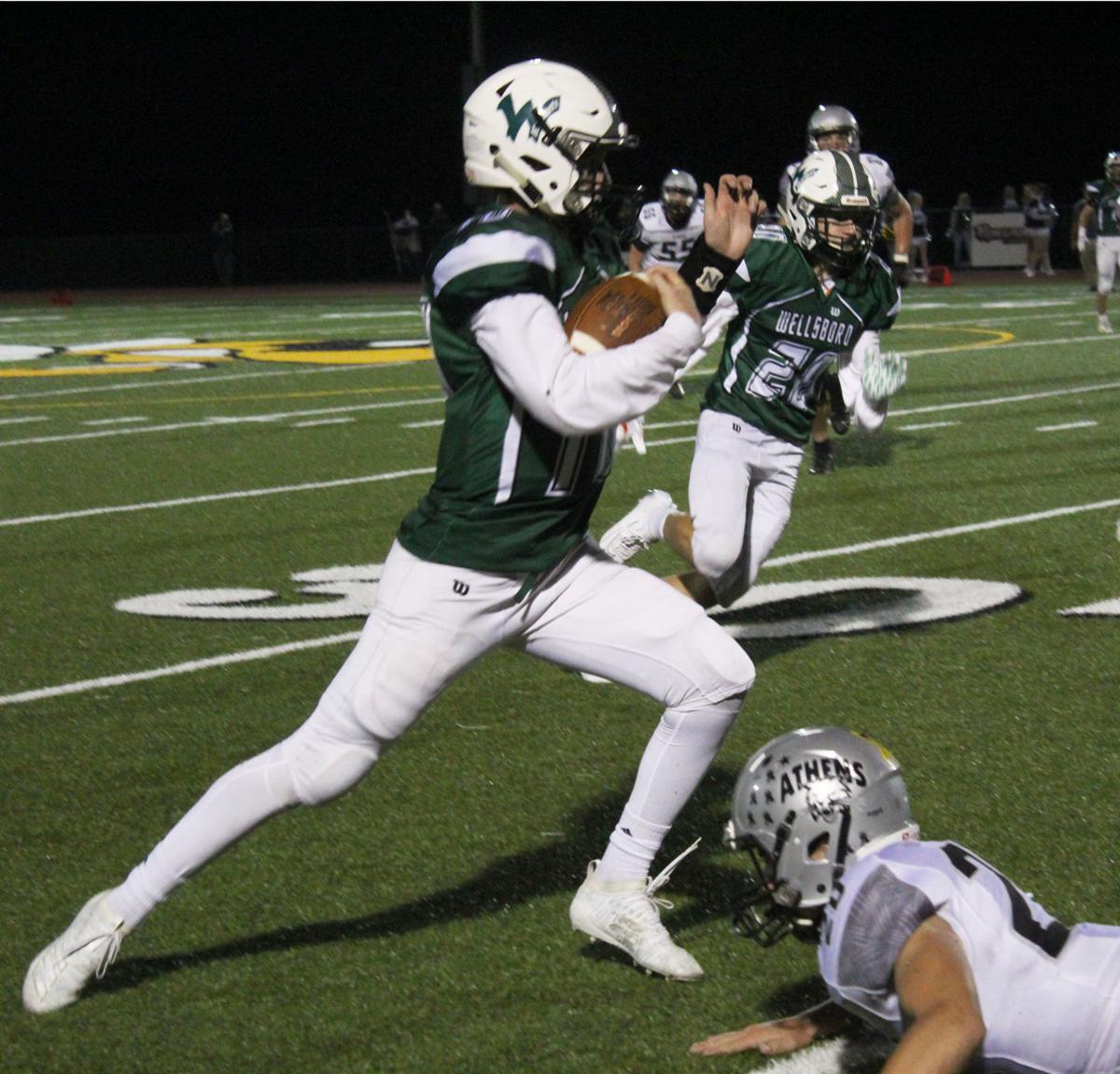 Quarterback Isaac Keane runs the ball down the sideline to pick up a huge first down for the Hornets in their big Homecoming victory.

Quarterback Isaac Keane runs the ball down the sideline to pick up a huge first down for the Hornets in their big Homecoming victory.

The Hornets returned home after a big win on the road last week against the Hughesville Spartans, and were looking to put on a show in front of a packed Wellsboro stadium for their Homecoming game. The Hornets came into this game winning three straight, and made it four against the Athens Wildcats with a 57-13 win.

The Hornets struck first, when in the first quarter Aidan Hauser broke through the line and dashed to the endzone on a 39-yard touchdown to bring the score to 7-0 with just over eight minutes left in the quarter.

The Wildcats responded soon after with a long drive that was capped off by a three-yard run. The Wildcats were unable to convert the extra point and Wellsboro clung onto a one point lead going into the second quarter of play.

In the second quarter, both teams struggled to move the ball and it was a back and forth battle until the closing minutes of the half.

The Hornets mounted a long drive down to the one yard line that took 17 plays, and after a couple short, hard earned runs once they got into the redzone, Isaac Keane was able to punch it in on a powerful one yard touchdown run.

After a penalty on the Wildcats during the extra point, the Hornets decided to go for two and were rewarded when Alex Burrel punched another gritty run in and put the Hornets up 15-6 going into halftime, and giving them a bit of breathing room.

At halftime, the Hornets celebrated Homecoming with senior running back Hauser winning the homecoming king crown as well as Cathryn Brought taking home the honor of Homecoming queen. It seemed as though the halftime festivities brought new life to an offense that wasn’t clicking as they normally do in the first half, and helped give them motivation to put the Wildcats team away.

Entering the second half, the Hornets offense started to look like the 50 points a game offense that we have seen all season.

Early in the third Hauser burst into the endzone on an 8-yard score for his second of the night and the Hornets were just starting to get their third quarter rally started. Two minutes later, Hauser electrified the crowd with a huge run of 57-yards to score his third touchdown on the night and second in the quarter.

The Wildcats scored from 23 yards out on a touchdown pass with three minutes left, but the Hornets rally wasn’t over yet.

Keane dropped back on the next possession and connected with Silas Wagaman on a huge 61- yard touchdown pass to bring the score to 35-13 with just a 1:51 left to play in the quarter. The 61-yard touchdown pass was the longest pass play of the season for the Hornets, in a quarter where almost everything the offense did resulted in a touchdown.

Hauser scored one more touchdown with time expiring on a 29-yard rush to bring the score at the end of the quarter to 42-13 after starting the quarter only up 15-6.

The fourth quarter was just icing on the cake for an offense that had put up 27 points on four touchdowns in the third, but the electric Hornets offense continued to provide scoring plays for the Homecoming crowd.

Keane tossed another touchdown to Zach Singer from ten-yards out to give him his second passing touchdown and third overall touchdown on the night, and Nick Smith slipped through the Wildcats defense on a 27-yard run to close out the scoring for both sides and cap off an incredible second half of play for the Hornets and bring the final score to 57-13.

The Hornets were once again led by Aiden Hauser on the ground, putting up a routine 238 yards on 18 carries to go along with four touchdowns.

Quarterback Isaac Keane also had one of his best performances of the season, completing nine passes for 128 yards and two touchdowns, as well as 31 yards on five rushes and a touchdown that included some key first downs in the first half as well as a strong up the middle run at the end of the first half that gave the Hornets some breathing room when the game was still close.

Defensively the Hornets continue to be able to match their offense, despite not being as flashy. The Hornets allowed less than 230 yards, and forced a turnover in the contest. They held the Wildcats to only 4 yards per carry, and only allowed two scores.

Tyler Hancock dominated throughout the game, with 11 tackles he helped lead the way for the Hornets run defense that despite allowing a few longer runs, kept the Wildcats run game in check. Wagaman made his presence felt on both sides of the ball, having his best receiving game of the season so far to go along with six tackles for the Hornets defense.

Logan Henry also was a big part of the defensive effort, causing his normal mayhem in the back field picking up two big sacks as well as a forced fumble and recovery.

The Hornets sit at 5-1 on the season and travel to Milton this week to face the Black Panthers who have yet to win a game this season. The Hornets have been on a mission since dropping their only game of the season to the Troy Trojans but now find themselves on a collision course with the undefeated Canton Warriors in two weeks.

The Warriors are the last remaining undefeated team in the NTL and the Hornets will need to be ready when they host them for their Senior Night.

Some lingering morning flurries or snow showers. Some clouds this morning will give way to generally sunny skies for the afternoon. High 24F. Winds NNW at 15 to 25 mph.