The Hornets came up with their eighth straight victory in Blossburg on their way to reclaiming the Morton F. Jones Trophy against the Panthers on Friday night. 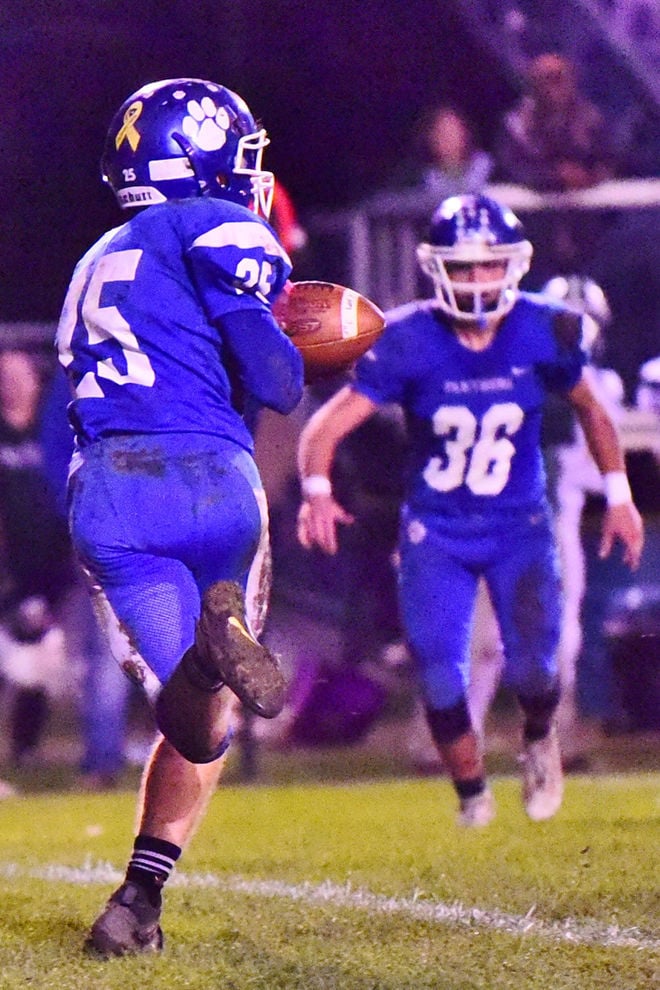 Kaelan Matczak hauls in one his three receptions on the night in a loss to the Wellsboro Hornets at home.

The Hornets came up with their eighth straight victory in Blossburg on their way to reclaiming the Morton F. Jones Trophy against the Panthers on Friday night.

Kaelan Matczak hauls in one his three receptions on the night in a loss to the Wellsboro Hornets at home.

BLOSSBURG — In a close game in Blossburg, the Wellsboro Hornets (9-1) were able to come out on top against the North Penn-Mansfield Panthers (4-6) by a score of 21-7 in a gritty defensive battle to reclaim the Morton F. Jones Trophy. The Hornets victory is their eighth in a row and sets up a first round district rematch this Saturday, Nov. 2.

Both defenses played a strong game, but the Hornets two goal line fourth down stops was the difference in this contest.

The first quarter the Panthers came out with an abundance of energy, and it showed on their first drive.

The Panthers marched down the field and capitalized when Colton Litzelman hit Kaelan Matczak for a 20-yard touchdown to open up the scoring for both sides.

On the next drive, the Panthers were able to come up with a huge fourth down goal line stop, as they held one of the best run-offenses in the NTL scoreless and denying them from the one-yard line.

The Panthers defense looked poised to give the Hornets problems all night long, with a clear motive of bottling up the leagues leading rusher Aidan Hauser, and control the line of scrimmage.

The Panthers were able to hold their lead moving into the second quarter behind a strong run defense that seemed to get the Hornets out of their normal rhythm offensively.

Early in the second quarter, the Hornets used the aggressive run defense of the Panthers to their advantage, calling a timely screen that caught the entire North Penn front seven upfield while Silas Wagaman slipped behind them for a 54-yard touchdown and their first score of the game. It was a perfect situational play-call for the Hornets that seemed to open up their run-game later in the quarter.

The Hornets defense, after allowing a first quarter touchdown, was lights out the remainder of the game, coming up with key plays that helped secure a victory. On the next Panthers drive, the Hornets came up with another three and out that helped set them up with great field position on their next drive.

The Hornets stormed down the field, with Hauser finally finding some running room against a smothering Panthers front, and capped off their drive with a one-yard leaping touchdown from Isaac Keane to give Wellsboro their first lead of the night at 14-7.

At the end of the first half, both teams seemed rushed to try and make a play, and was a back and forth of turnovers, with both teams coughing up two interceptions and two fumbles to close out the half with neither team being able to come up with any more points.

In the second half, the Hornets looked to create some separation, after having one of their lowest scoring outputs of the season so far in the first half. Hauser was able to carry the Hornets down the field on a long drive that Keane capped off with a momentum grasping touchdown pass on a fourth and long to Zach Singer from ten yards out to give them a two touchdown advantage of 21-7.

From this point on, the Hornets defense came up big, with stop after stop during the final two quarters of the game. On the next drive the Hornets came up with their second goal line stop of the Panthers and took over at their own two-yard line.

Both defenses played exceptionally well in this contest, and the Panthers found a recipe to make the Hornets uncomfortable for the first time all season. Wellsboro had its lowest scoring game of the season, 21, and until midway through the second quarter had a lot of problems running the football throughout.

The Panthers defense was once again led by Brett Harvey who has continued to be a ball-hawk from the second level for the Panthers.

Harvey has a clear nose for the ball and helped to lead his defense in an impressive effort against the steam-rolling run offense of the Hornets.

Harvey totaled 13 tackles on the night and was all over the field from start to finish. Harvey finishes his season with 95 total tackles and 47 over his final four regular season games.

Litzelman was the star on offense for a Panthers team that struggled to move the ball. Litzelman completed 23 passes for 218 yards and the lone touchdown for the North Penn squad.

Bryan Bogaczyk struggled to get the run game going but was able to do some damage as a receiver, coming up with 113 yards on 13 touches throughout the night.

The Hornets offense had its first true stumble of the season, but were able to win the game on the other side of the ball.

Holding the Panthers offense to under 300 yards and denying them consistently at the goal line to give them a big victory.

Their defense came up with three huge fourth down stops within their own five-yard line that ended up being the difference in the game. The Hornets shut down the run offense of the Panthers, and only yielded 61 yards on 17 carries at a clip of just 3.8 yards per carry.

Hauser was still able to put together his usual productive performance, coming up with 152 yards on the night despite struggling to find running room for a large portion of the game.

Keane was the real difference in coming up with a win, showing a lot of poise on both sides of the ball, passing for 187 yards on 11 completions with two touchdowns, and taking a one-yard touchdown over the top of the Panthers defense for the go-ahead score. He also was able to play a big part in the secondary for the Hornets, pulling in an interception late in the first half as well as a few timely pass breakups to help his defense.

The Hornets victory sets up an extremely interesting rematch in the first round of the district playoffs.

Despite winning by two touchdowns, the Panthers defense looked stout and ready for the Hornets run game in the loss.

The Hornets also now have an idea on the game plan the Panthers put together to try and topple their top scoring offense.

With both teams gaining some perspective on how the other team will look, it should prove to be an extremely competitive game against two rivals.

The Panthers will travel to Wellsboro for a chance to avenge their regular season finale loss, and the Hornets will look to extend their win-streak to nine on a Saturday night rematch on Nov. 2.

Some sun in the morning with increasing clouds during the afternoon. A stray shower or thunderstorm is possible. High near 85F. Winds SE at 5 to 10 mph.