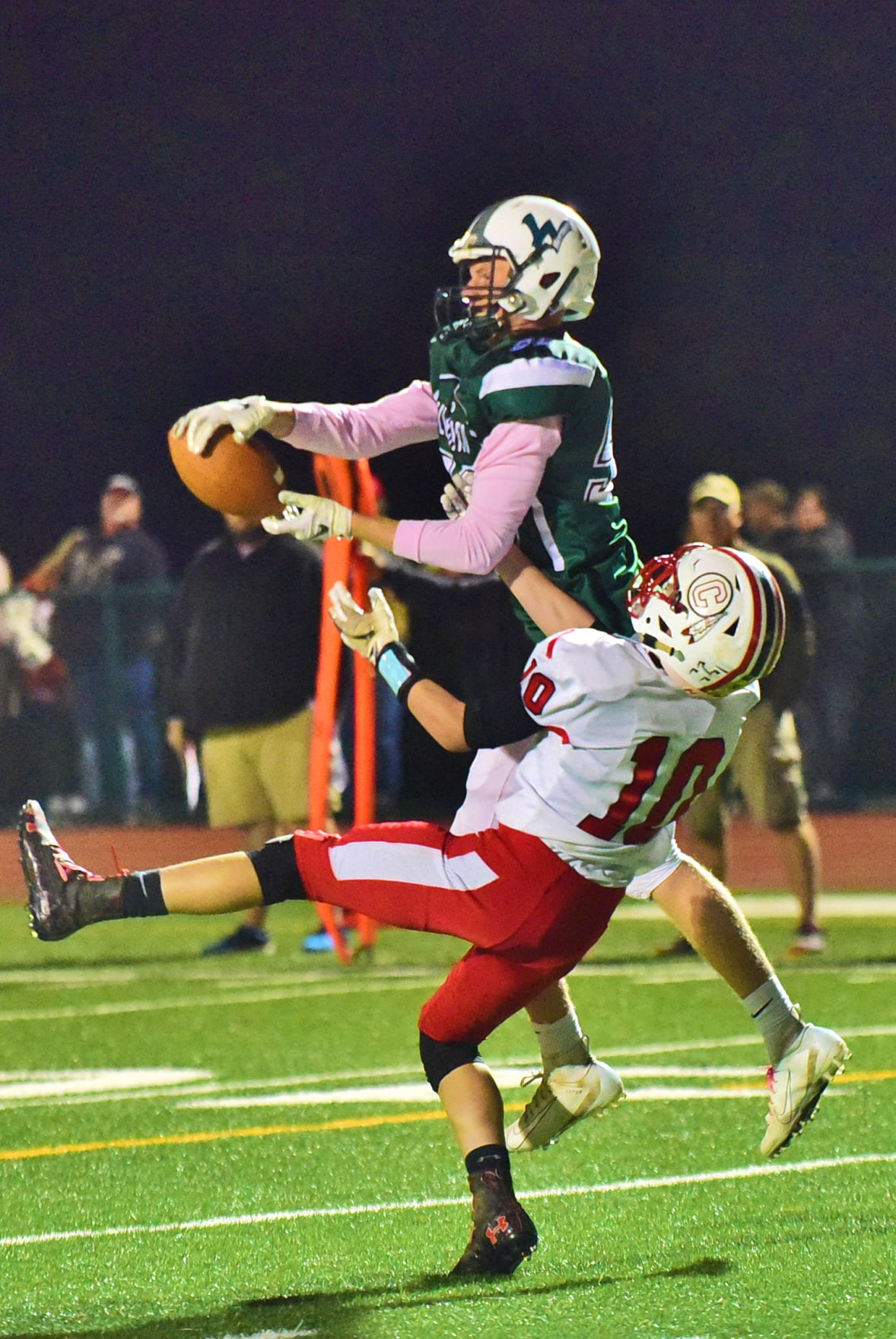 Zach Singer snatches the ball from Cooper Kitchen and takes in for the touchdown fo the  Wellsboro Hornets 40-6 victory over the Canton Warriors. 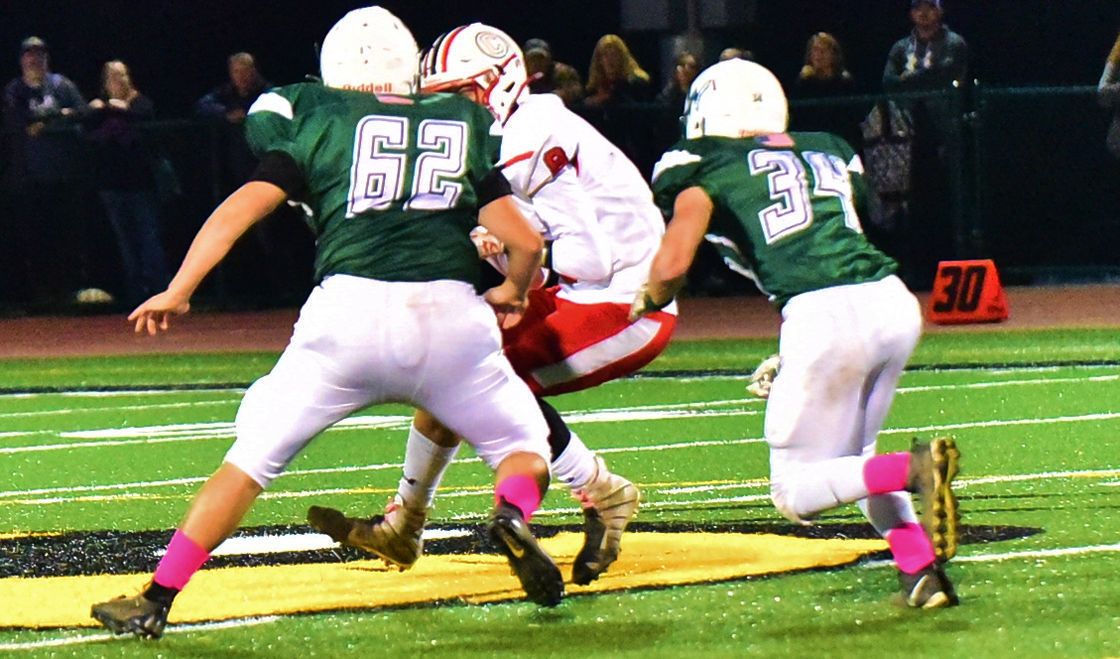 Hornets Carson Davis and Clayton Orsborn swarm quarterback Uriah Bailie for a tackle during their 40-6 victory over Canton.

Zach Singer snatches the ball from Cooper Kitchen and takes in for the touchdown fo the  Wellsboro Hornets 40-6 victory over the Canton Warriors.

Hornets Carson Davis and Clayton Orsborn swarm quarterback Uriah Bailie for a tackle during their 40-6 victory over Canton.

In a game where most fans speculated that it would be a close matchup, the Wellsboro Hornets football team made a big statement against the undefeated Canton Warriors and put the rest of the NTL on notice moving to 7-1 on the season.

The game started slow for both sides, with the Warriors showing their clear intention to try and bottle up the NTLs leading rusher Aiden Hauser. The Hornets found different ways to get Hauser involved with the Warriors keying on the ground game, and were able to strike first with Hauser catching a beautiful pass from Isaac Keane on a 56-yard touchdown.

The Warriors were able to respond soon after early in the second quarter when Warriors quarterback Uriah Bailie delivered a 39-yard pass to Cooper Kitchen for the first and only score of the game for the Canton squad.

From this point on, the Hornets took complete control. A few minutes later in the second quarter, Keane delivered his second touchdown pass of the evening to Hauser from four-yards out to give Wellsboro a 14-6 lead with just over nine minutes left to play in the first half.

At this point in the game, both teams were still in the game and within striking distance of the lead when Canton drove the length of the field and were in the red zone with only a few ticks left on the clock. Then Ryan Sweet was able to change the whole atmosphere of the game in a matter of moments.

Sweet noticed something on the defensive end that caused him to move out of position purely based on instinct. He jumped a pass and snatched the ball from Riley Parker at the four-yard line and took it the distance for a touchdown on a play that had huge implications on the momentum of the game.

What could have been a tie ballgame going into the half, Wellsboro was able to mold into a 21-6 lead and capturing the momentum of the game in one play.

In the third quarter, the Wellsboro unit really took off, dominating Canton from start to finish with

a swarm of Hornets defenders converging on the ball on almost every play. The Canton defense started to bend as well, with their plan of containing Hauser going completely out the window as he started to run wild as the game continued. Within the first 12 seconds of the second half Hauser broke through the line and was gone almost immediately on a 60-yard burst.

The Hornets struck once more in the quarter with only two minutes remaining to bring their lead to a commanding 33-6 on a third touchdown pass by Keane to Zach Singer for 21 yards. The fourth quarter was opened up by a 22-yard Hauser rushing touchdown to bring the score to its final mark of 40-6.

The Hornets offense was almost as impressive as their defense in this contest. After a first half where Hauser relied on the passing game to do most of his damage, he was uncontainable in the second half of play.

Singer was able to put together one of his best performances of the season as well, hauling in three passes for 80 yards and a touchdown.

Keane stepped up in a big way to put together his best performance so far this season. As a young quarterback, Keane has shown development throughout the season, getting more and more comfortable in the offense as the season has progressed. Keane put together 10 completions for 212 yards and three touchdowns on the night. He topped his career high in both yards and touchdowns against a defense many considered the best in the NTL.

Defensively the Hornets came to play. In an inspired performance, they were able to shut down Uriah Baile who came into the game top five in passing and rushing in the NTL to just 148 totals yards and an interception on the night.

Clayton Orsborn, Logan Henry and Tyler Hancock continue to lead a defense that has only allowed 40 total points in the last four games. Sweet made what could possibly be the biggest play of the game that gave the Hornets what could have possibly been a 14-point swing before the half.

The Hornets made their biggest statement of the year, with not being heavily tested over the past few weeks, they showed that they can play with any team in the NTL.

The Hornets currently sit at 7-1 on the season and will host the Wyalusing Rams during a Saturday afternoon game on Oct. 19, and finish off their regular season against the North Penn-Mansfield in Blossburg in a big rivalry game on Friday Oct. 25.