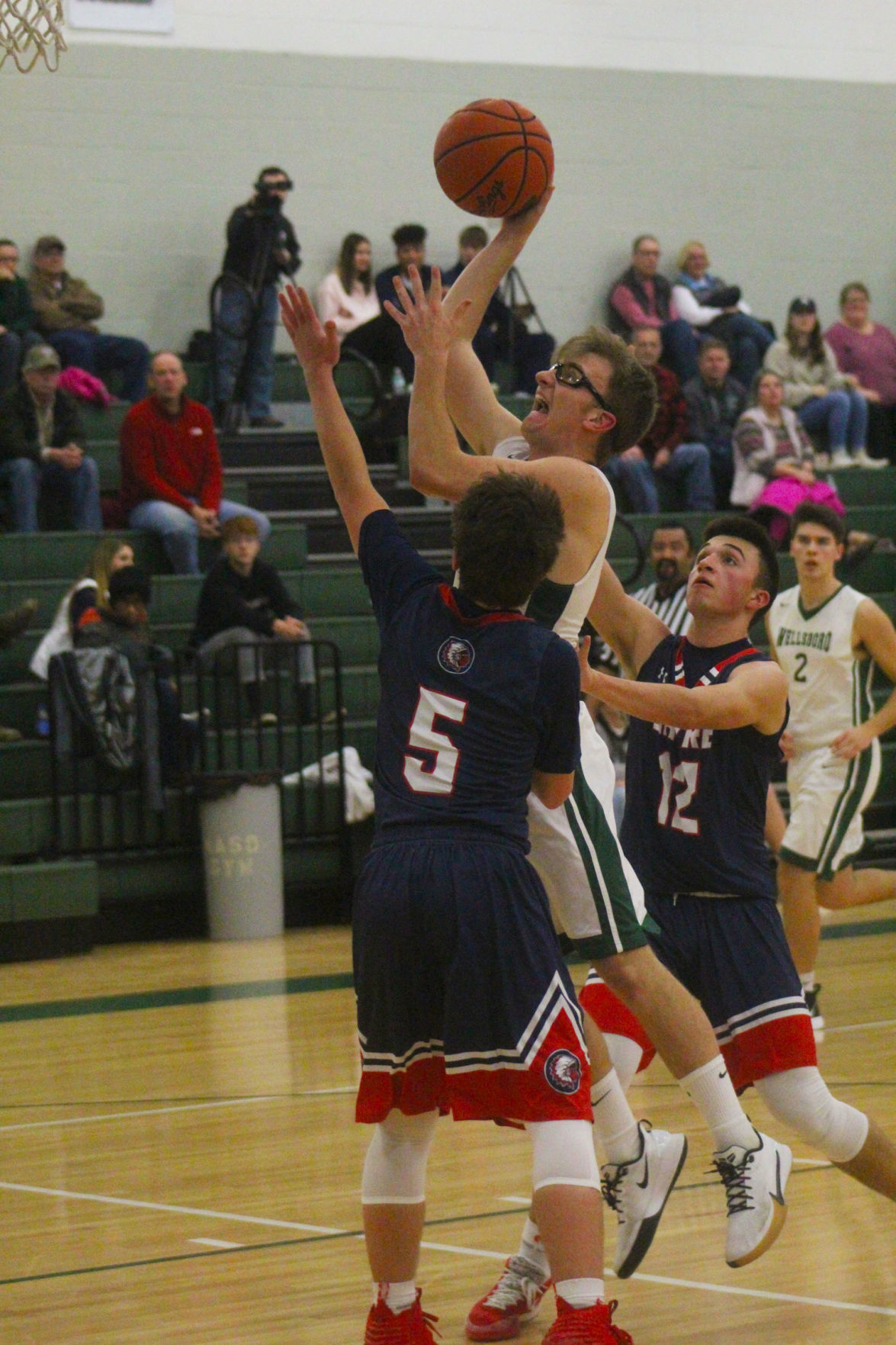 Ty Morral soars over two Sayre defenders for a tough basket in the Hornet’s win over the Sayre Redkins on Wednesday, Jan. 8. 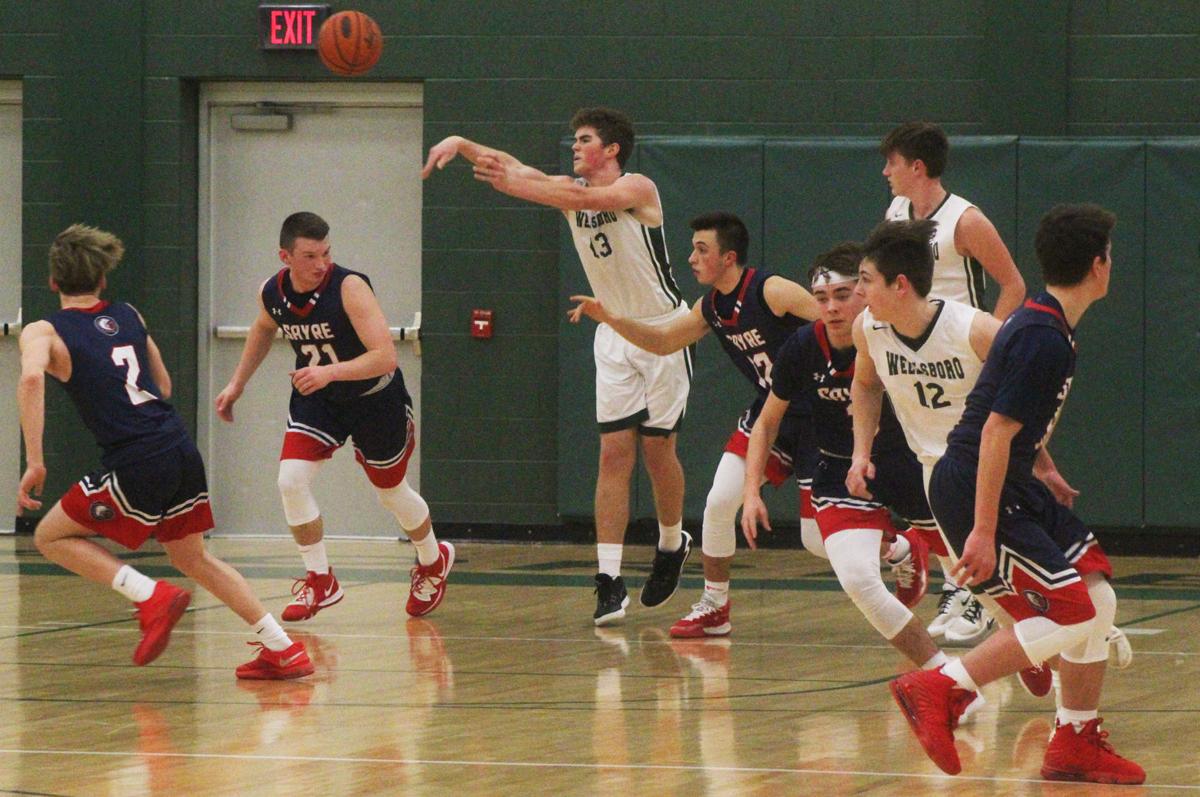 Liam Manning passes the ball up court after a rebound during the Hornets big win over the Sayre Redskins.

Conner Adams strings a pass through the Cowanesque Valley Indians defense during their 80-49 win on Monday, Jan. 13.

Ty Morral soars over two Sayre defenders for a tough basket in the Hornet’s win over the Sayre Redkins on Wednesday, Jan. 8.

Liam Manning passes the ball up court after a rebound during the Hornets big win over the Sayre Redskins.

Conner Adams strings a pass through the Cowanesque Valley Indians defense during their 80-49 win on Monday, Jan. 13.

WELLSBORO — The Hornets were able to snap a two-game losing streak when they topped Meadowbrook on Monday, Jan. 6, and kept their momentum rolling in the right direction as they were able to dominate Sayre at home on Wednesday, Jan. 8.

Wellsboro also trounced the Cowanesque Valley Indians on Tuesday, Jan. 13 to push their record to 8-5 on the year and 5-2 in league play.

The Hornets were able to come out of the gates swinging against Sayre and after two quick triples from Conner Adams, the game was blown wide open by Wellsboro moments later.

The Hornets rallied behind their tenacious defense, and pitched a shut-out in the first quarter as they jumped out to a huge 23-0 lead to end the first quarter, and never let up throughout.

Wellsboro cruised to the final buzzer by a score of 80-42, in a game in which they never trailed. Joseph Grab once again led all scorers with 23 points to go along with two rebounds, five steals and three assists.

Adams was quick out of the gate, and scored the Hornets first six points as he drilled two open threes in Wellsboro’s first two possessions on his way to nine points, four rebounds, four steals and four assists.

Liam Manning also turned in another strong game in the paint, and recorded his fourth double double on the season with 10 points and 10 rebounds.

“It’s good to get back into the win column,” coach Steve Adams said. “Through the losing streak we were still working hard, but it’s always more fun to win than it is to lose.”

Wellsboro captured their seventh win of the season and moved to 4-2 in league play on the season with the win as they traveled to Westfield to face a solid Cowanesque Valley Indians basketball team on the road on Monday, Jan. 13.

In Westfield the Hornets continued to move in the right direction, as they took down a tough Cowanesque Valley Indians team by a score of 69-40 and extended their win-streak to three games.

After a tight first half of play, with the Hornets holding onto a 29-23 lead, they came out with a strong third quarter on both ends of the floor, outscoring the Indians 19-6 in the frame giving them plenty of breathing room down the stretch.

The Hornets ended up scoring 40 points in the second half to extend their mid-season winning streak to three.

Joseph Grab scored 19 points, had three rebounds, five steals and two assists in the win to lead his team.

Darryn Callahan had one of his best scoring nights as well, as he added 13 points, with two assists and seven rebounds in the effort. Liam Manning continues to be the glass-cleaner for the Hornets, and poured in nine points to go with his eight rebounds on the night in a near double double.

The Indians were led by senior Seth Huyler who netted 17 points in the effort, and has been the top scorer for Cowanesque for most of the season.

The Wellsboro Hornets have enjoyed a much-needed hot streak over their last three games, and have outscored their opponents by a whopping 36 points per game during that span.

Wellsboro has a much tougher schedule over the next week, as they face three teams that are all over .500. They faced Athens (6-3) on Wednesday, Jan. 15 and go on to take on Troy (6-4) and rival North Penn-Mansfield (7-5) who played the Hornets down to the wire in their last matchup that was decided by just two points.

They also have a rematch with the Wyalusing Rams in two weeks, who topped them earlier this season and a chance to make a big statement.

“Yeah, anytime we get a chance to play somebody that beat us is a good opportunity,” coach Adams said. “We came out loose and flat (in the second half against Wyalusing). Tonight we didn’t come out flat and that was the difference in the game.”

Wellsboro will look to keep stringing together wins, as they only face one team without a winning record over the next two weeks.