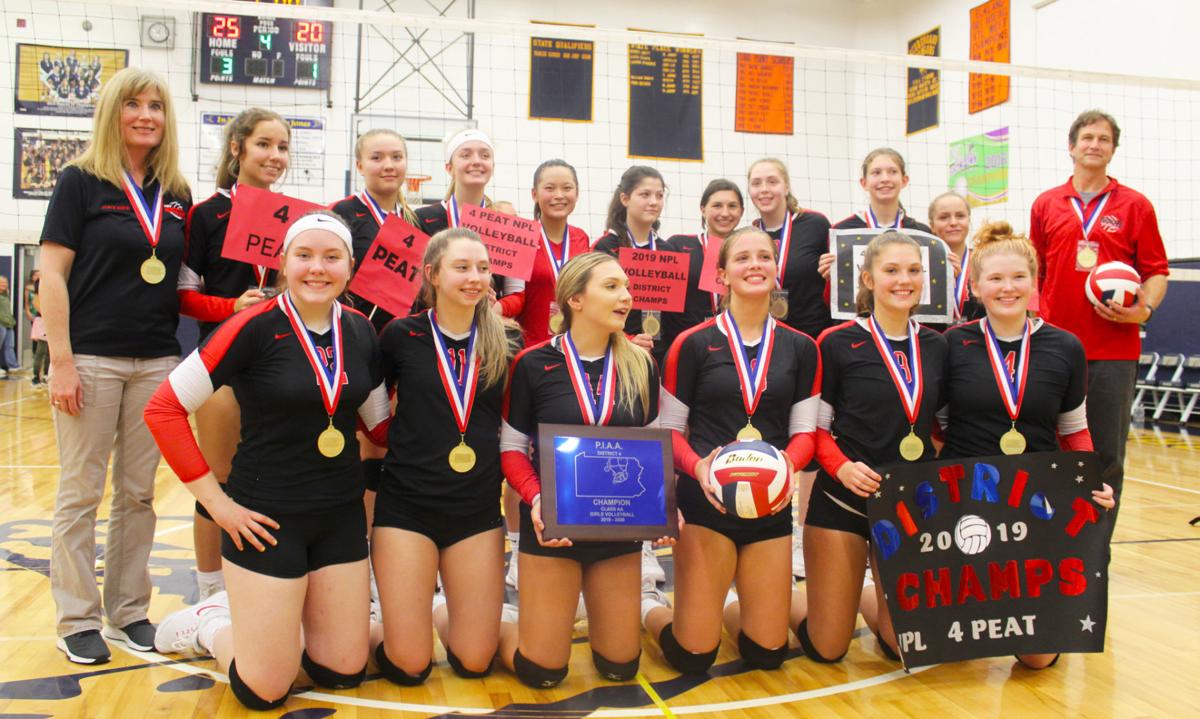 The North Penn Liberty Mounties volleyball team secured their fourth straight district championship in a 3-1 win over the Wellsboro Hornets. 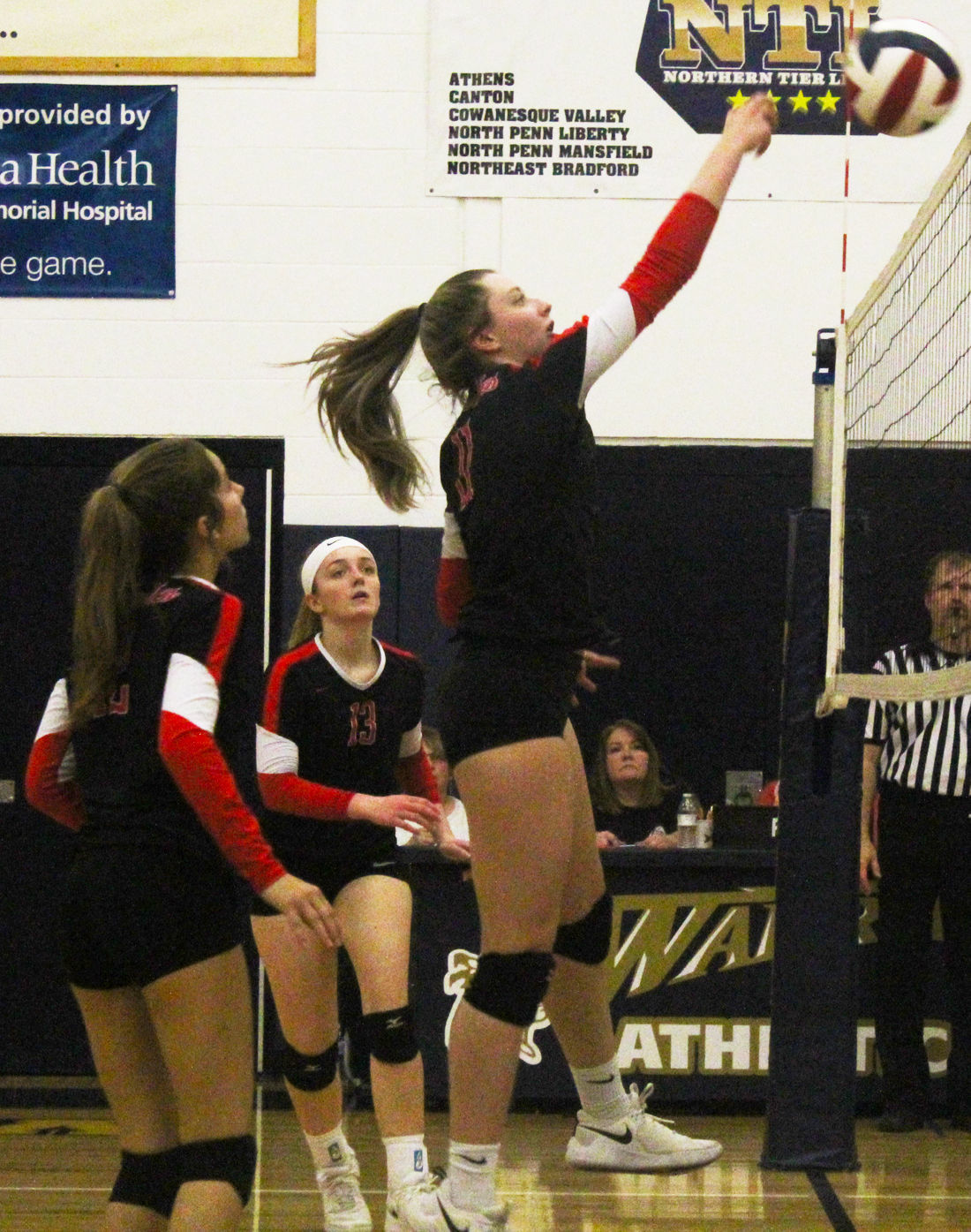 Elizabeth Welch goes up for the ball during the Mounties victory against the Wellsboro Hornets for a district title.

The North Penn Liberty Mounties volleyball team secured their fourth straight district championship in a 3-1 win over the Wellsboro Hornets.

Elizabeth Welch goes up for the ball during the Mounties victory against the Wellsboro Hornets for a district title.

WILLIAMSON — In a third and final matchup between the rivals North Penn-Liberty Mounties and the Wellsboro Hornets, the Liberty volleyball team took home the district championship in a polarizing match by a score of 3-1 and swept the first round of the state championship bracket by a score of 3-0.

Against Wellsboro, Liberty closed out another convincing win, and took home their fourth straight district title in one of their most competitive matchups of the year.

Despite falling three to one, the Hornets competed aggressively all night long, and Caitlyn Callahan played as well as humanly possible to carry the Hornets and take a set from Liberty, something an NTL school was yet to accomplish all season.The first set saw both teams trade blows early, going back and forth in the opening moments of the game with a tied score of 5-5. Liberty was able to finally take a slim lead of 10-8 after Grace Tice came up with a big block at the net to give the Mounties some momentum moving forward. Wellsboro had two miscues afterwards and a string of scores by the Liberty squad pushed them to a 18-10 lead and gave the Mounties their biggest advantage of the match.

Liberty closed out by outscoring the Hornets 7-6 to give them a one set advantage and continued their streak of not dropping a single set to an NTL team. Charisma Grega was spectacular, racking up five kills and was unstoppable down the stretch for the Mounties.

The second set was a much different story, with Callahan determined to push the Hornets to a district title, she took over. The Hornets jumped out to a 2-1 lead early but the Mounties came firing back, scoring four of the next five points to give them a 5-3 advantage early.

Wellsboro clawed back to tie it up, and then Callahan came up with two big kills to give them a 7-5 advantage. The back and forth play continued as each team traded blows blows, and the Hornets Callahan made kill after kill to keep her team in the set.

With the game tied at 12, but the Liberty team made a mini-run and grabbed their biggest lead of the set at 15-12 and looked poised to close out with a 2-0 lead.

The Wellsboro team rallied right back, and finally regained the lead at 19-18 on yet another thunderous kill by Callahan from the back row. The Hornets closed out on a 7-2 run to hand the Mounties their first loss in a set all season.

Callahan was absolutely unstoppable, and anytime she was able to get to her spots, she soared over everyone with a dagger, even from the back row. She was able to rack up 15 kills and at one point seven in a row to give the Hornets new life moving down the stretch.

With the Liberty team facing adversity for one of the first times all season, they responded with poise. Liberty came out firing on all cylinders and didn’t let up at any point during the set.

The Mounties jumped out to a quick 8-2 lead, and never looked back. They closed out the set on an incredible 17-6 run and convincingly took the victory by a score of 25-8 and moved to a 2-1 advantage and one away from their fourth district title in a row.

Liberty picked up in their possible close out set right where they left off in the last, jumping out to a fast lead of 4-0, and putting the Hornets on their heels.

The Hornets continued to rally back, showing resilience down the stretch, and were able to close the gap at 8-7.The game went back and forth with neither team able to create seperation and the score was knotted at 16-16. The Mounties were finally able to find a groove and looked poised down the stretch, with a big five point surge that put them up 21-16 with the district title just within reach.

The Mounties once again asserted their dominance in district play, and showed why they are one of they have been the best team in the district all season long.

Captain Madison Minyo played one of her best games of the season, not only during play but as a leader for her team. Her body language, demeanor and strong play helped steady the Mounties during their first dropped set to Wellsboro all year, and stopped a collapse from her team in a pivotal situation.

Minyo put up 15 kills, two aces, one block and 13 digs throughout in one of her most balanced performances all year long. Grega was also key during the win, with 13 kills, two blocks and 13 digs. Alli Koval had 27 digs and Tice had 9 blocks to go along with 13 kills.

Despite the loss, the Hornets played strong all around game, and besides the third set, they hung with a strong Liberty team the entire game and pushed them harder than most teams have all season long.

Callahan was spectacular throughout, especially in the second set. Callahan totaled 28 kills and five aces. Megan Starkweather also was huge in the effort with five kills, nine aces, 20 assists, 14 digs and three blocks to help lead the Hornets.

The Liberty team opened up state competition against the Holy Redeemer Royals volleyball team on Tuesday, Nov. 5 in Athens the Mounties faced a team they have come up short in the first round of state playoffs three consecutive years.

The Liberty girls came out with the same intensity and passion they have all year, and not only avenged the three losses, but dominated the game from start to finish, sweeping Holy Redeemer 3-0 to move on to the next round of play.

The first set was where Liberty asserted themselves as the better team, and set the tone for how the game would unfold.

The set started off close, with Holy Redeemer getting out to a quick lead of 4-2, but things slowly turned in favor of the Liberty team as the set progressed. The Mounties clawed back to tie the game at six, and behind some stellar plays by Minyo, they took a 10-7 lead and never looked back.

The Royals boasted a player in Livia Moore who had recorded over 500 kills this season, but the Liberty team made her a complete non-factor throughout the first set, cruising to a convincing 25-14 win and a 1-0 set lead.

The Mounties continued their stellar play in the second set of action, where they were able to seamlessly use a strong defense to set up their offensive sets.

The opening of the set started out the same as the first, with both teams trading blows, and a few errors on both sides left Liberty once again trailing early at 5-4. They were once again able to string together a run behind the aggressive play of Minyo, who helped push the Mounties to 15-8 lead.

The Royals put together a mini-run late but were unable to come up with an answer to the all-around team play of the Mounties as they closed the second set out at a score of 25-18.

The Mounties completely took over in the third set, and the Royals looked completely outclassed by the end of the contest while the Liberty team strung together their best set of the night, and put away their opponent by a set score of 25-10 and completed a 3-0 sweep over the Royals.

Minyo took over in the final plays of the game, and was able to accomplish almost anything she tried, coming up with the final two kills and closing out the first round of the state playoffs in a huge win for the Mounties.

The Liberty squad put together a very well-rounded performance, with Minyo leading the way with not only her play but attitude throughout. Minyo totaled 15 kills, two blocks and nine digs and was nearly perfect striking the ball.

Grega totaled four kills, 21 digs and two blocks. Elizabeth Welch came up with a team high five blocks and Julia Nawri racked up a team high 18 assists during the win.

The Mounties will move to the second round of the playoffs where they will take on Panther Valley on Sat. Nov. 9.

Mainly sunny to start, then a few afternoon clouds. High 79F. Winds NNW at 5 to 10 mph.