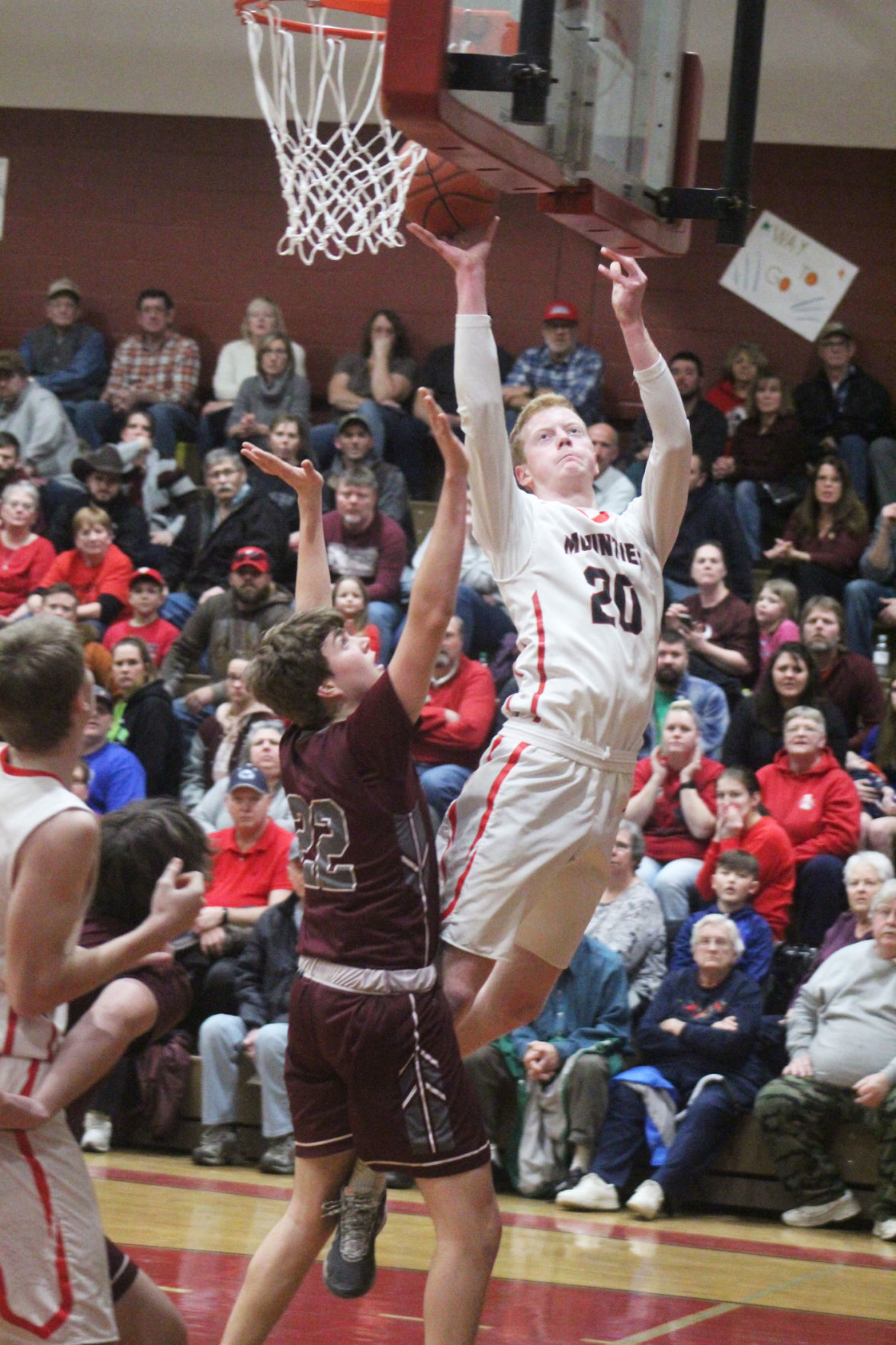 Brandon Thompson soars over the Northeast Bradford defense to score two of his 12 points during Liberty’s 56-44 win over the Panthers on Thursday, Feb. 6. 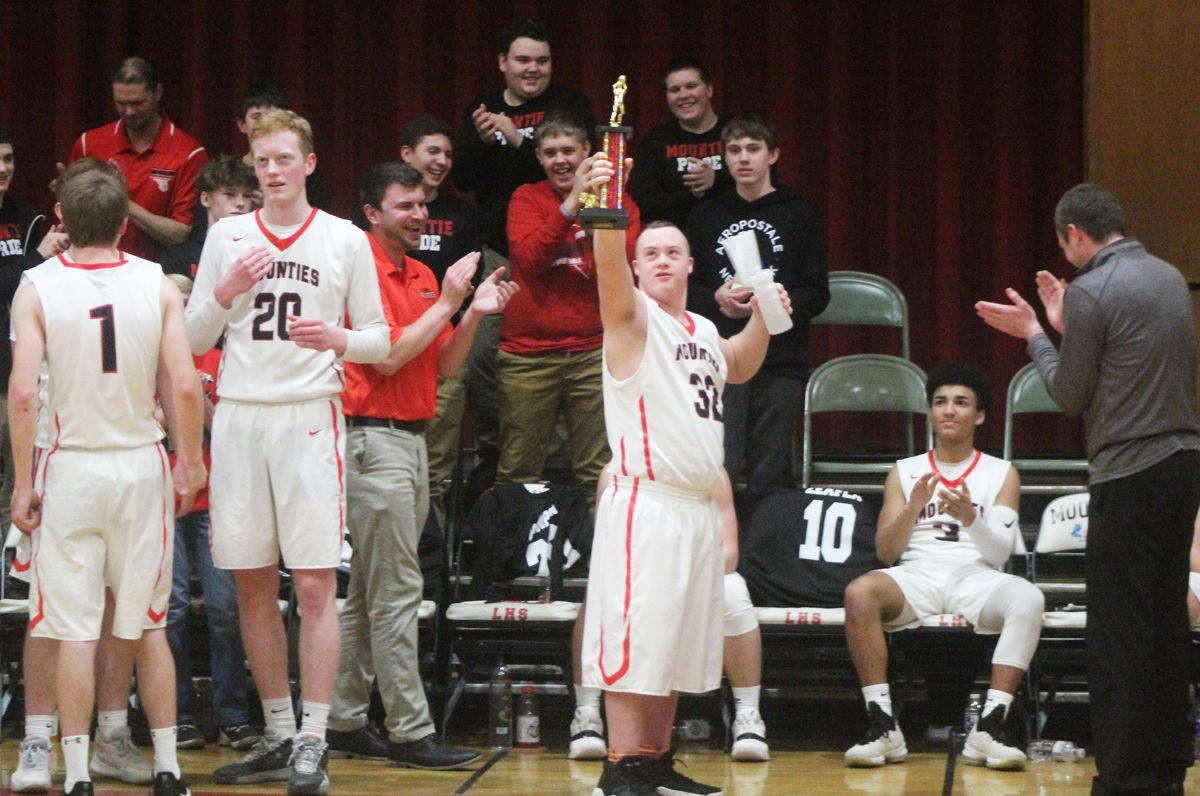 Coach Brian Litzelman presented Dutch Litzelman and Chase Person (not pictured) the most valuable teammate awards during halftime of the North Penn-Liberty victory over Northeast on Thursday, Feb. 6.

Brandon Thompson soars over the Northeast Bradford defense to score two of his 12 points during Liberty’s 56-44 win over the Panthers on Thursday, Feb. 6.

Coach Brian Litzelman presented Dutch Litzelman and Chase Person (not pictured) the most valuable teammate awards during halftime of the North Penn-Liberty victory over Northeast on Thursday, Feb. 6.

LIBERTY — After clinching their first NTL Division 2 title in 29 years, the North Penn-Liberty Mounties boys basketball team (20-2) ended their season avenging one of their two losses on the year against Northeast Bradford Panthers (12-10) in convincing fashion, topping the Panthers 56-44 and capped off an undefeated home season of 10-0.

In perspective, the 20-win season for the Liberty basketball team is a historical one, and the last team who captured an NTL title was 20-6 29 years ago.

When asked about where this season ranks all-time for the North Penn-Liberty basketball program, coach Brian Litzelman wrote, “This season has been really special, watching this group of boys develop from fifth and sixth grade until now. They have always had a desire to be good at whatever they do, and it’s nice to see them reaping the rewards from their hard work. This season probably ranks in the top three of all-time for me, maybe even number one, due to the fact that I get to see my sons achieving success.”

The game started off in typical Liberty fashion, with Duncan Zeafla breaking open the scoring with a three-pointer for the Mounties to spark the first Liberty run of the evening. After Noah Spencer nabbed two steals that led to two baskets, the Mounties started the game with a bundle of energy and a 7-0 lead.

Northeast rallied back and closed the gap to 7-4, but after a Koleton Roupp three-ball, Liberty started to crack the game wide open and ended the first quarter up 18-9.

The Panthers owned the opening minutes of the second quarter, and after hitting two big three-pointers, got back within one point with the score 18-17. The Mounties continued to be able to spark a run out of thin air as they have all season long, and went on a 13-3 run highlighted by a barrage of three-pointers as both Derek and Colton Litzelman knocked down deep-balls to end the half 31-22 with Liberty in control.

The Panthers defense was able to tighten up in the third quarter, and after allowing 31 first half points, only allowed seven in the third and were able to close the gap to 38-34 heading into the fourth with the momentum slowly moving in their favor.

Liberty responded with a champions mentality and came out pouding the ball inside, and Brandon Thompson who was quiet most of the night took over for the Mounties, scoring nine of his 12 points on the night in the frame to propel his team to an 18-point fourth and their 20th win of the season by a score of 56-44.

Liberty continues to be one of, if not the most balanced team in district 4 basketball, with three players scoring in double-figures, and five players scoring more than five points during the win.

In his last regular season performance as a Mountie, senior Zeafla had himself a great performance. Zeafla led his team in scoring and knocked down two three-pointers that sparked Liberty runs that put the game away.

Zeafla is one of the top three-point shooters in the NTL and has knocked down 47 deep-balls this season, which is good for second in the entire NTL.

“ He has been leading by example all season, and the second half of the season he has stepped it up even more, especially in practice. His shooting is something that usually gets us started or fires the crowd up. Because usually one knocked down three leads to more of the same. He will be tough to replace next year,” wrote coach Brian Litzelman on his lone starting seniors impact this season.

Thompson also netted 12 points in the win to go along with three rebounds and two blocks on the night including one block that was sent halfway across the gym that sent the Liberty crowd into a frenzy.

Colton Litzelman continued to be invaluable off the bench, and netted 10 points, grabbed three rebounds, dished out four assists, blocked one shot and came up with two steals in another stat-stuffing performance for possibly the best sixth man in the NTL.

With a lot of tough games on the horizon, the Liberty team’s goals remain the same as they did from day one of the season: bring home a District Title to Liberty.

“We are keeping our goals we set at the beginning of the season, and that is to win a District Title. This definitely won’t be easy, Bishop Neuman is tough year in and year out, as is Sullivan County. I also think that the Northumberland Christian School will not be an easy out. So we will be striving to reach our goal, knowing that nothing will be easy and we will have to earn everything,” coach Litzelman wrote in regards to the team’s goals now that the regular season has come to a close.

As the number one team in the NTL District 2 standings, Liberty will face the two seed from the NTL Division 1 standings in the Troy Trojans (14-8) on Thursday, Feb. 13 at home, in a rematch of a classic game that came down to the wire in overtime, where Liberty was able to protect their home floor with a win, 59-57.