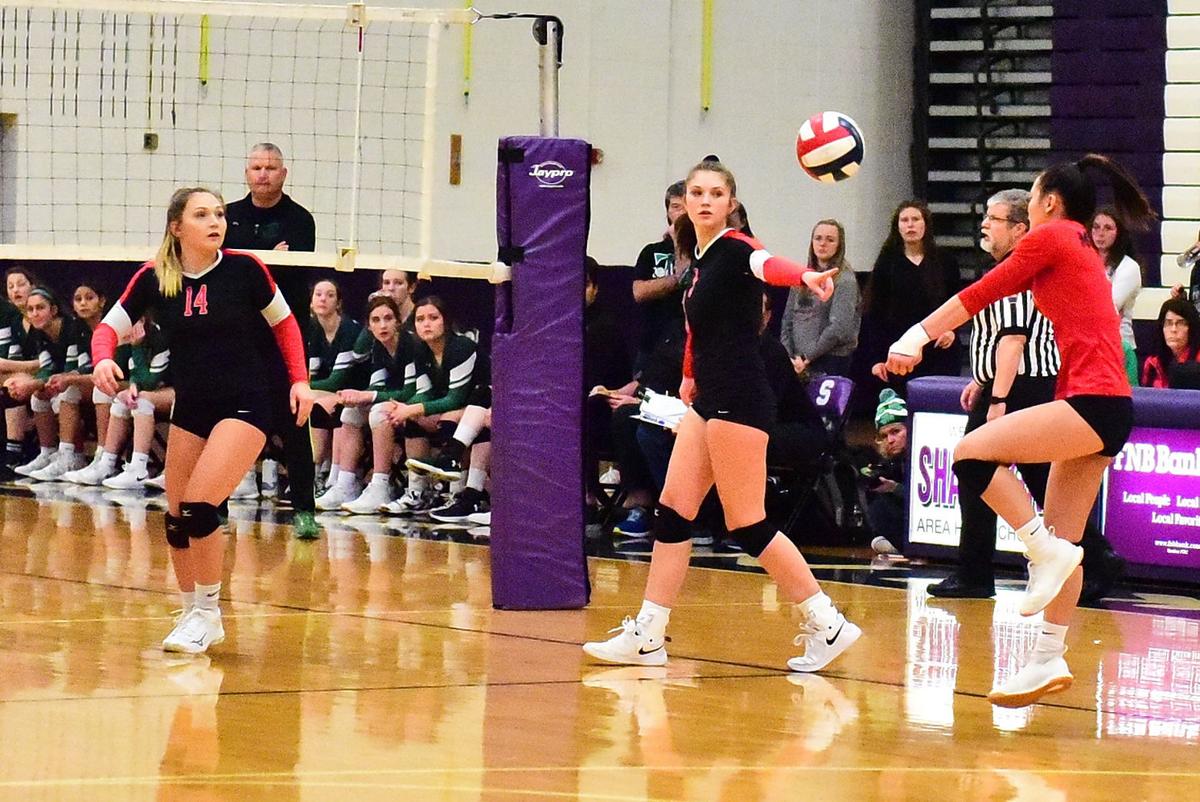 JoAnne MacNamara, Hannah Bowens and Ali Koval during their state quarterfinals victory against Trinity on Nov. 12. 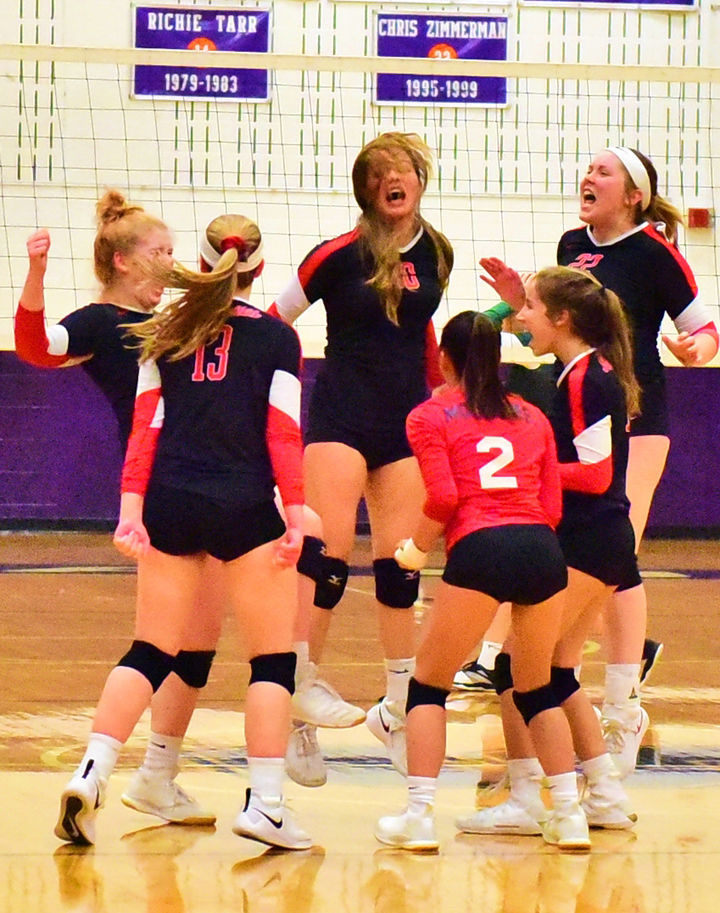 The North Penn-Liberty celebrates their sweep of Trinity and a trip to the state championship this Saturday at Cumberbatch Valley high school. 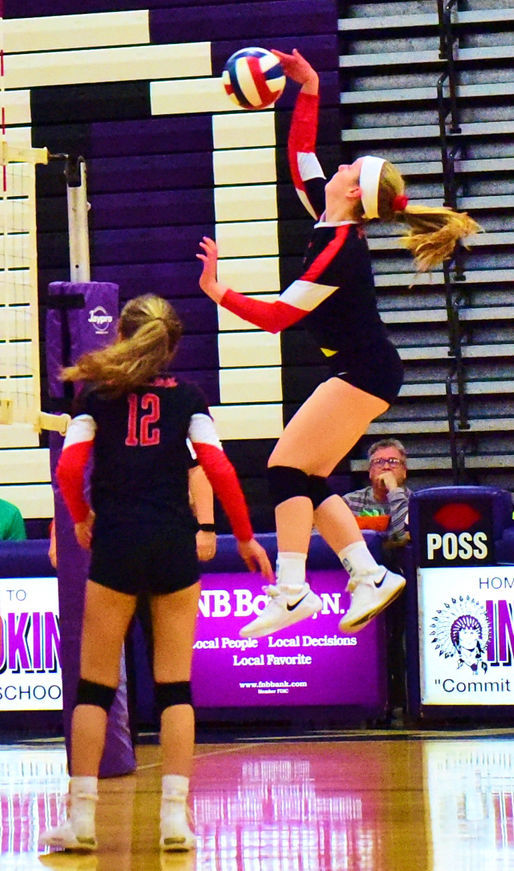 Charisma Grega goes up for one of her 12 kills on the night during their 3-0 victory over Trinity.

JoAnne MacNamara, Hannah Bowens and Ali Koval during their state quarterfinals victory against Trinity on Nov. 12.

The North Penn-Liberty celebrates their sweep of Trinity and a trip to the state championship this Saturday at Cumberbatch Valley high school.

Charisma Grega goes up for one of her 12 kills on the night during their 3-0 victory over Trinity.

SHAMOKIN — North Penn Liberty volleyball traveled to Shamokin for two state playoff volleyball games in which they were able to defeat Panther Valley by scores of 25-20, 25-20 and 25-20 in their second sweep in the state playoffs.

In their quarterfinal matchup they took on Trinity in which they secured their third sweep of the playoffs by scores of 25-21, 26-24 and 25-18 to continue their magical run through the Pennsylvania state championship bracket all the way to the finals.

Panther Valley played every set close in the first matchup, but Liberty used their depth and ability to make plays in almost every crunch time situation to overcome their opponent in three straight sets.

The first set saw both teams trading blows, going back and forth with neither team able to come up with separation early.

Everytime a team would make a run, the other quickly responded. When the score was knotted at 11, Charisma Grega was able to help her team take the lead when a ball that was seemingly headed for the floor was popped up on a soccer kick that lead to a Maddison Minyo kill.

Panther Valley continued to fight and clawed the score back to 13-13, but Liberty did what they do best and went on a 7-4 run to give them a 20-17 lead late on the back of a great defensive effort.

The Panther Valley team roared back, closing the gap to 20-19 but the Liberty team responded with a 5-1 run to close out the first set of play.

The second set saw Liberty cruise out to a quick lead of 11-6, helped by an impenetrable defense and a few miscues on the Panther Valley team.

Panther Valley was able to rally back and close the score to 16-13, but Liberty was able to score in almost every pivotal situation and took a commanding two set lead by a score of 25-20.

The third set was another back and forth battle, but when the game was tied at seven apiece, Liberty surged ahead on a five point run and was able to fend off Panther Valley for a third straight set and won by a score of 25-20.

The Liberty team relied heavily on their defense, with time after time coming up with great digs and strong defense.

The Panther Valley team needed at least four strong efforts to just earn one point, with the Liberty team refusing to relinquish anything without a fight. The Liberty team poses a problem for most teams, with strong contributors all over the floor it is almost impossible to know where the attack will come from, or to find a weak spot to exploit.

Grace Tice continues to have a dominant run in the state playoffs, and has been playing at a different level since the district finals.

Tice came up with 13 kills, three blocks and five digs and made play after play for Liberty down the stretch. Even more impressive was her kill percentage of 92.9% and only had one kill error during the game. She also was able to tally her 100th career block in the effort.

Ali Koval was outstanding defensively for Liberty, and came up with 28 digs and was all over the floor giving headaches to the Panther Valley attack as she was able to deny them on multiple would-be kills throughout the game.

Minyo continues to be outstanding, serving as one of the most talented members of the roster as well as being the energy and leader on the team. She is forever keeping her team's effort level through the roof and backing that up with her play.

Minyo put up her usual well-rounded statline of 12 kills and 14 digs in the effort.

Julia Nawri was phenomenal as well, coming up with 17 assists and nine digs during the contest in one of her best performances to date.

The Mounties started their night off strong with a 4-1 lead. However throughout the remainder of the first set, the Shamrocks were never more than 1 or 2 points away from the Mounties.

The Mounties gained a five point advantage taking the score to 11-6.

The Shamrocks made a comeback towards the end of the first set, nearly tying the score at 21-22. The Mounties were the leaders of the first set and won it with a final score of 25-21.The second set started off a little rough for the Mounties, down 2-0 before jumping ahead 6-2.

Liberty had another scoring streak and set the score to 17-10 where they held a suffocating control over the second set until Trinity was able to tie the score at 20-20.

The last five plays of the set were intense as the crowds watched on in almost utter silence. The Shamrocks took the lead 24-22 where the Mounties matched them 24-24. With a riveting last two plays, the Mounties took the second set win as well.

The third and final set of the night began with the Mounties down by two points yet again but came on strong tipping points in their favor 6-2. From the bleachers, the crowd was urging the Mounties on throughout helping to push their team over the top and cruise to a 25-18 win and a shot at a state championship.

Koval continued her tenacious defensive effort against Trinity, and improved on her already solid outing against Panther Valley with a second incredible performance.

Koval totaled 31 digs and 26 serve receives during the contest and helped anchor the defense for the Liberty team.

Minyo also continued to be the emotional leader of the team, imploring her team to victory behind another solid night of play where she came up with 12 kills, four aces, 13 digs and one block in the effort.

Grega also turned in her usual solid performance with 12 kills, 17 digs one block and 15 serve receives.

The Lady Mounties will have their shot at playing in the state finals this Saturday, Nov. 16.

Mostly sunny skies during the morning hours. Scattered showers and thunderstorms developing in the afternoon. High 89F. Winds SSE at 5 to 10 mph. Chance of rain 50%.