Charisma Grega makes a play on the ball during The Mounties’ tight championship matchup against North Catholic where they came up a bit short but still claimed a second place state finish. 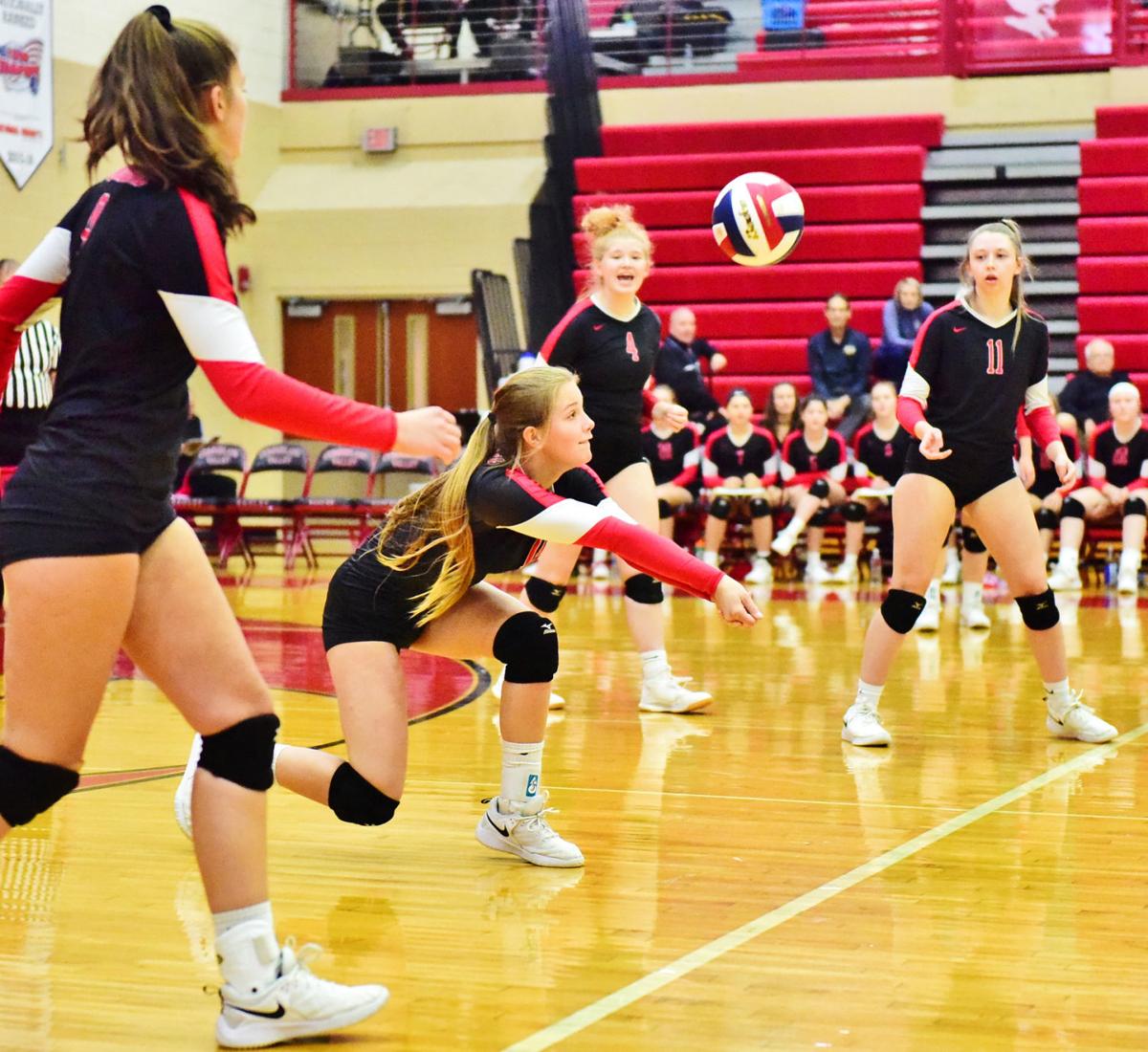 Grace Tice comes up with a dig during the The Mounties state championship game. 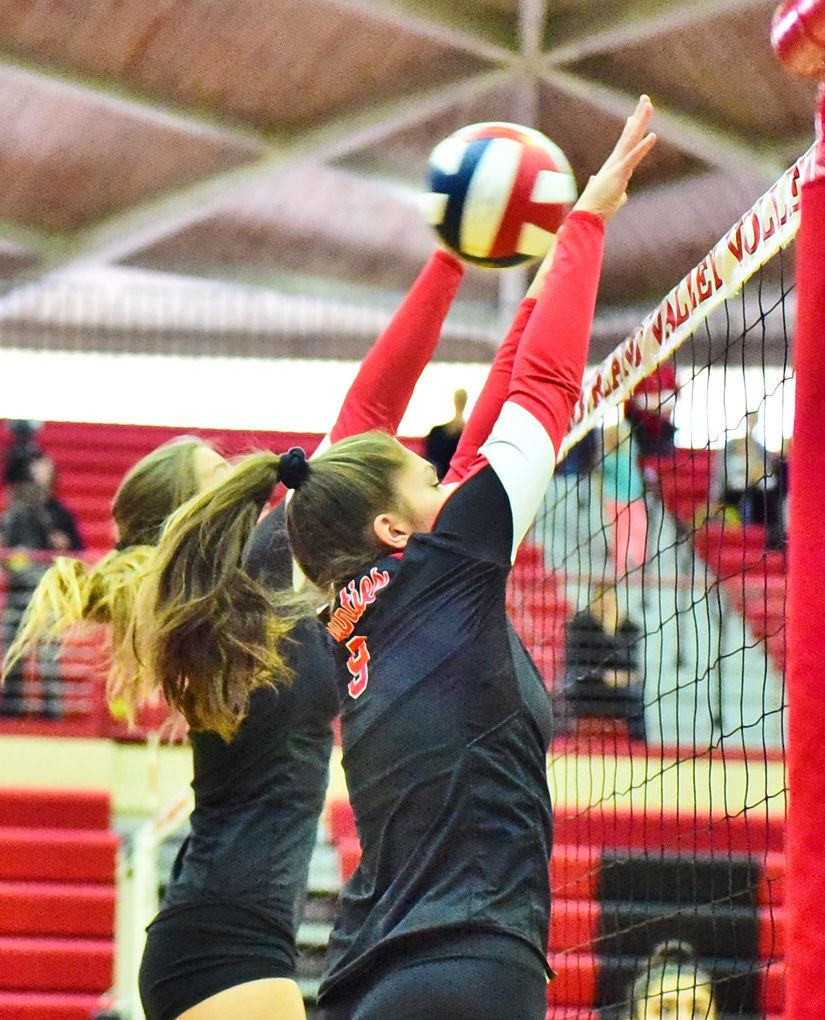 Grace Tice and Hannah Bowens go up for a block against North Catholic in their state championship matchup.

Charisma Grega makes a play on the ball during The Mounties’ tight championship matchup against North Catholic where they came up a bit short but still claimed a second place state finish.

Grace Tice comes up with a dig during the The Mounties state championship game.

Grace Tice and Hannah Bowens go up for a block against North Catholic in their state championship matchup.

MECHANICSBURG —After cruising into the PIAA 2A state championship match, the North Penn-Liberty Mounties were unable to take down powerhouse North Catholic in the finals and fell by a set score of 3-2.

The Lady Mounties came out swinging and opened up a 2-0 set lead early, but they were unable to handle a three-set onslaught by North Catholic.

The first set saw both teams battling for seperation, with each team trading early blows. A big block by Elizabeth Welch with the score tied at six gave Liberty a dose of momentum early, as they started to pull away by a score of 10-7.

Liberty extended their lead later in the set to 15-10, before North Catholic was able to close the gap to 17-14 late.

The Mounties closed out on an 8-3 run capped off by a long volley and two spectacular saves before earning the point, and took the set by a commanding 25-17 and claimed a win in the first set of the state championship match.

The next set continued to be a back and forth battle, with neither team gaining an edge throughout and the score tied at 15 apiece.

Liberty was able to find a bit of room to work, and went on a five point run led by a slew of mistakes by North Catholic, and were finally able to get some separation late.

North Catholic started to claw back near the end of the set, but it was too little too late as the Mounties claimed their second win by a score of 25-20, and moved to only one game away from a state title.

Both teams had entered a high pressure situation, as the Mounties tried to put away an extremely resilient North Catholic team, and North Catholic inversely had to attempt to make a comeback of epic proportions against the high energy Liberty team.

The next set presented a situation that was as high stakes as any championship caliber moment could be.

The third set was highlighted by North Catholic coming out with a new energy that wasn’t present in the first two.

Liberty fought to keep it close, but the aggressive play by its opponent made it nearly impossible to make stops. North Catholic rolled to a 25-16 win and the momentum was slowly switching sidelines.

With the set score at 2-1, North Catholic continued their inspired comeback, rolling through to another big win of 25-14 and giving them a heap of motivation going into the fifth and final set, and on the other end Liberty was feeling the pressure.

Despite an honorable effort, Liberty was unable to pull off a win in the final set falling 15-7, losing by a set score 3-2 and bringing their magical season to a close with a second place finish in a close loss to one of the top teams in the entire state.

Even with the loss, Liberty had a lot of strong performances to hang their hat on, with Maddison Minyo closing out her career as a Mountie with a strong performance. Minyo led her team in kills (13), had 13 digs and 19 serve receives.

Her play and demeanor all season long was the engine that kept the Liberty team rolling.

Alli Koval continued her strong play in the state playoffs with a team high 25 digs and also came up with 25 serve receives. Welch paced the team in blocks with six including a couple of big momentum capturing stuffs during the first few sets.

Charisma Grega was also a standout, ending her junior season with another strong showing, especially on the defensive end against the brutal attack of the North Catholic team. Grega racked up 11 kills, 23 digs, one block and 41 serve receives throughout the game.

The North Penn-Liberty team blew expectations out of the water throughout the season, and time after time not only beat the teams that were supposed to be better, but they dominated them.

Liberty was also able to finish the regular season and district play undefeated, and only dropped one set all season until the state championship match.

Their team-first mentality was a sight to be seen throughout the season and have a lot of young contributors that will need to fill the roles of seniors Minyo, Welch, Grace Tice, Hannah Bowens, JoAnne McNamara and Patelin Nowak who were all a huge part of the success Liberty enjoyed this season.

Intervals of clouds and sunshine. A stray shower or thunderstorm is possible. High 88F. Winds NW at 10 to 15 mph.