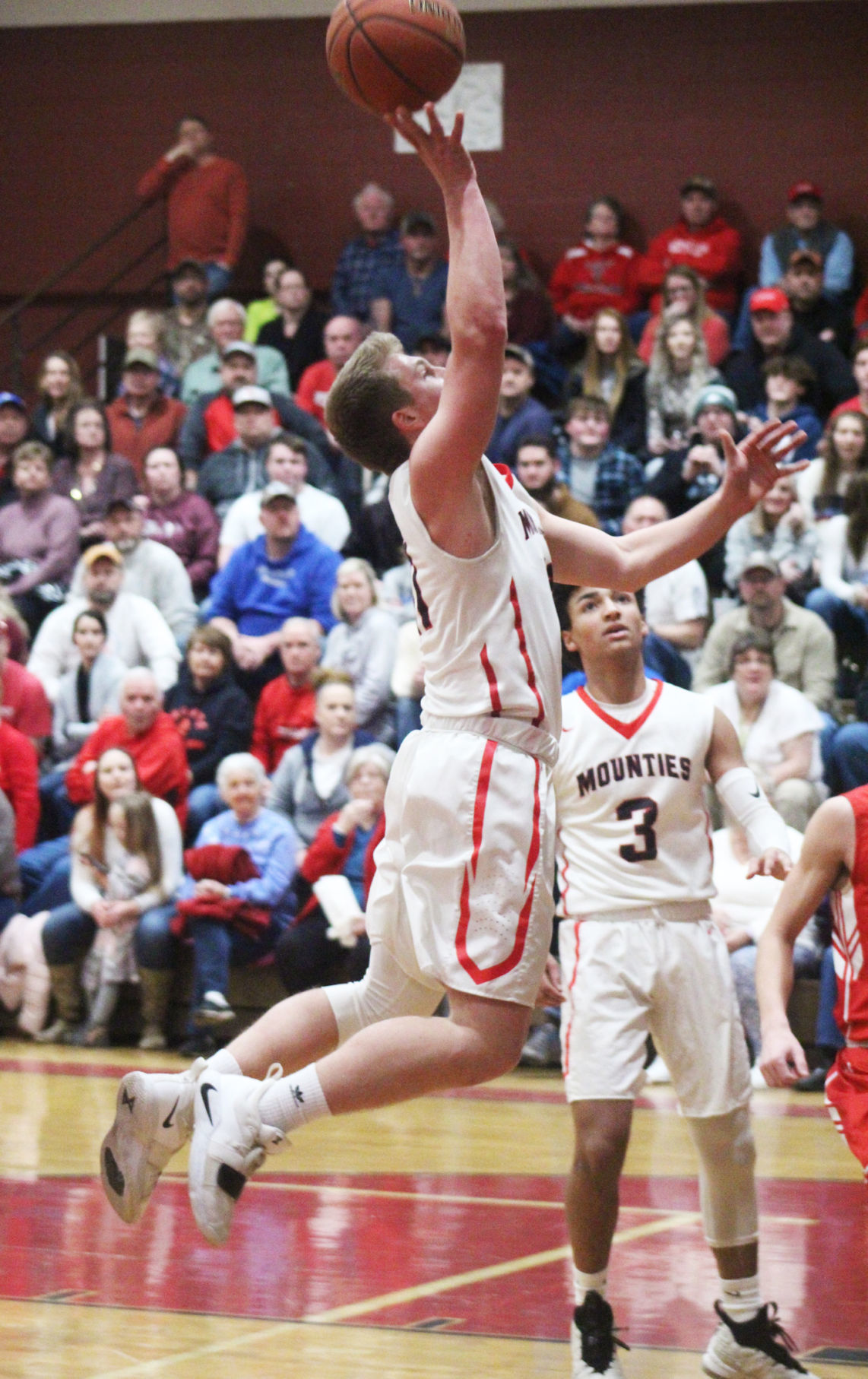 Koleton Roupp puts up a shot in NP-Liberty’s loss in the NTL showdown to the Troy Trojans on Thursday, Feb. 13. 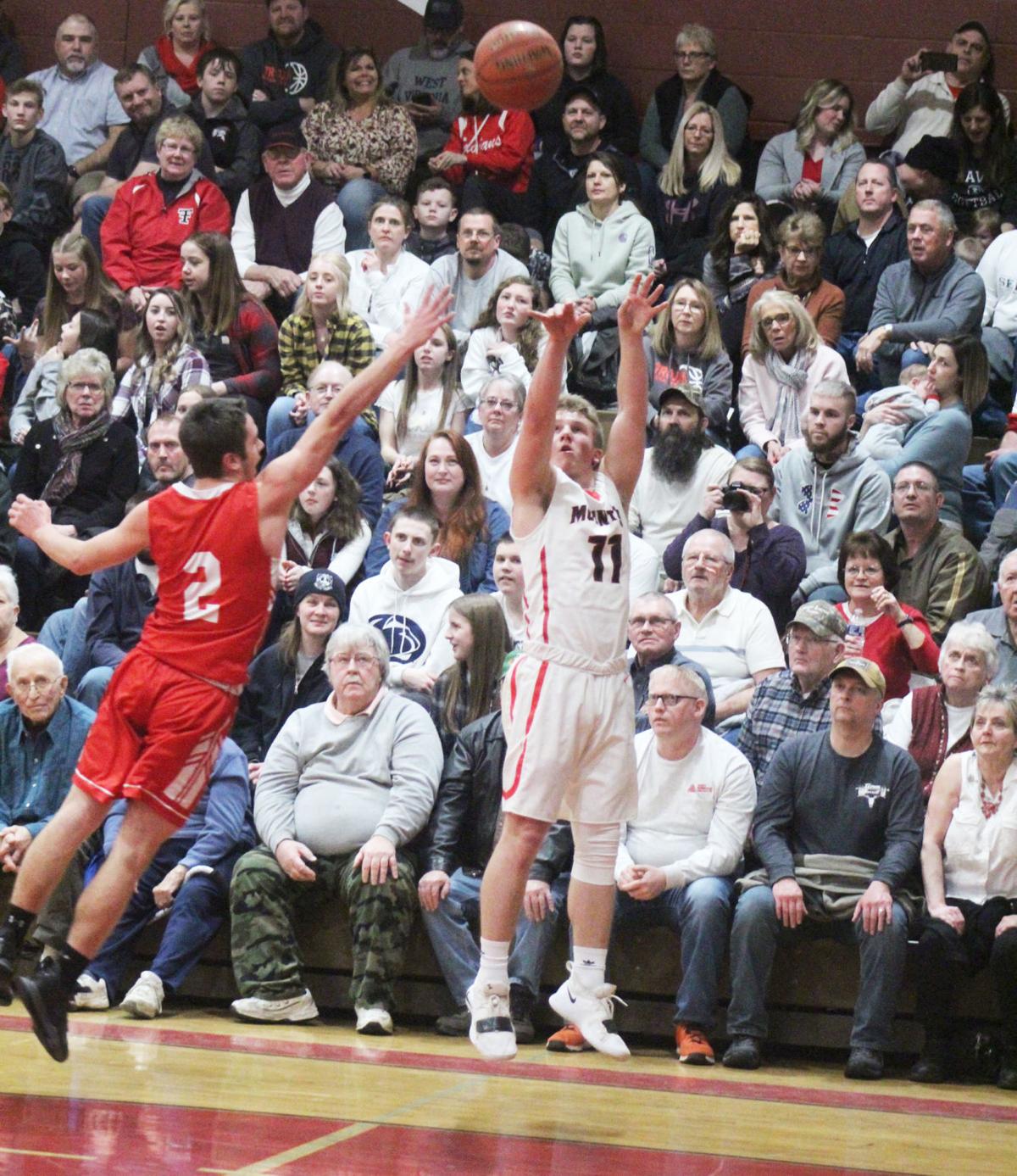 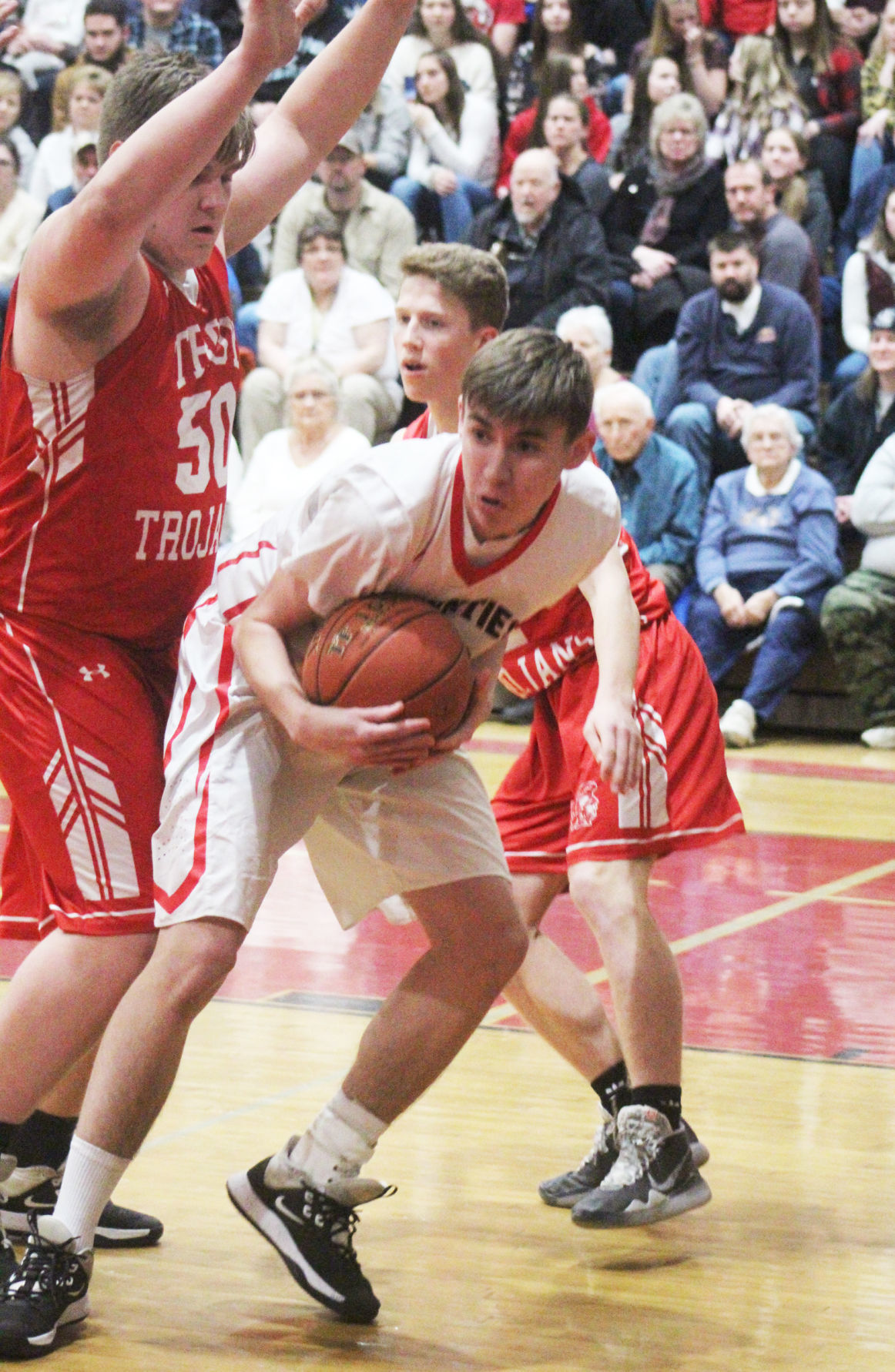 Sam Shedden grabs a tough rebound in the NP-Liberty's loss to the Troy Trojans on Thursday, Feb. 13.

Koleton Roupp puts up a shot in NP-Liberty’s loss in the NTL showdown to the Troy Trojans on Thursday, Feb. 13.

Sam Shedden grabs a tough rebound in the NP-Liberty's loss to the Troy Trojans on Thursday, Feb. 13.

LIBERTY — The NP-Liberty boys basketball team (20-3) were undefeated at home coming into the NTL showdown and hosting the Troy Trojans (15-8) they were looking to extend their 10-game home win streak.

The Trojans had other plans, and despite a frenzied rally by Liberty in the fourth they were unable to move on to the NTL showdown finals after losing 58-57.

Liberty struggled throughout, with normal go-to player Noah Spencer unable to get his jump shot to fall, and the Mounties needing to create offense from other players. The Liberty team got their spark from the first man on the bench, Colton Litzelman.

“I think you have to give some credit to the Troy defense, they didn’t give him (Spencer) the easy lane to the basket that he’s used to. Then when a couple shots didn’t drop it started to get in his head. Hopefully this will be a learning lesson for him that there are many more things he can contribute to the team and he can do those things in future games,” coach Brian Litzelman commented on a rough shooting night from Spencer.

When Brandon Thompson racked up two early fouls that sent him to the bench, the offense struggled for a stretch and as Troy started to get things rolling, it was Litzelman who hit back-to-back three-pointers in the first quarter to keep his team ahead early.

Without a dominating down-low presence, the Troy team doubled shooters on the perimeter and halted what the Mounties do best, and that’s hit a barrage of three-point shots.

NP-Liberty was only able to score nine points in the quarter, and found themselves trailing at halftime 29-25 with Troy starting to piece together the way to stop the Mounties potent offensive assault.

Troy won the battle of second half adjustments, and came out with a purpose as offensively they were nearly unstoppable, scoring 21 points with three players adding more than six points during the stretch.

The lead was as large as 15 points during the frame, with Liberty’s offense unable to keep up with the torrential third quarter offensive display put on by the Trojans.

Heading into the fourth, Liberty was down 50-38 and things were starting to look grim with only four minutes remaining and a 14-point lead still hanging over their head until Liberty’s offense sparked an impressive run out of what seemed to be nowhere.

After a Litzelman free throw, shots began to fall for Liberty. Sam Shedden knocked down a contested three-pointer and closed the gap down to just eight points.

Thompson hit a layup for two of his eight fourth quarter points to cut it to six and in the blink of an eye, a 14-point lead dwindled down to just one after Litzelman got a tough layup to fall with only 47 seconds left.

Troy hit on two free throws, but the Mounties continued to fight, and Thompson was able to get an easy look at a layup and convert, bringing the score back to a one-point game with only 35 seconds remaining.

After a quick foul and missed free throw by Troy, NP-Liberty would get one more chance to cap off an incredible comeback. As Spencer dribbled some clock off, the Troy defense swarmed the ball and Spencer made a last effort to get to the rim and put something up.

Spencer missed and put up second shot, no good. With one final shot after a high-effort rebound he couldn’t get it to fall, and Liberty’s perfect home record found it’s first blemish of the season.

In the loss, Litzelman continued to play extremely well, and his play off the bench almost helped Liberty steal the win late.

“He’s very deserving to start” coach Litzelman wrote, “But he has been an unbelievable spark off the bench. It’s really great to see everyone get a little more energy when he comes in, the players and even the crowd. It gives all of us coaches a little relaxing feeling knowing we are probably going to go to another level on both ends of the court once we get him in the game. Probably the most important thing is that he accepts the role and said he will do whatever is best for the team. It’s hard to find many players willing to sacrifice starting time for the betterment of the team, it says a lot about him as a team member.”

Liberty still holds the number one seed in the single A district bracket, which will allow them a first round bye in the district playoffs, and an automatic state playoff appearance.

“I really don’t like all the time off in between games,” coach Litzelman wrote about the extended break between games.

“I’d rather get on a roll and keep it going. But, we have some things to clean up on both sides of the ball. The extra practices will give us a chance to work on some of these things like on ball defense, transition defense, help side defense, offensive ball movement and body movement, running sets when we need a good shot and a few other things. I’m hoping the long time in between games doesn’t hurt us.”

The Mounties will have sufficient time off to reevaluate and put together a game plan for their first district contest.