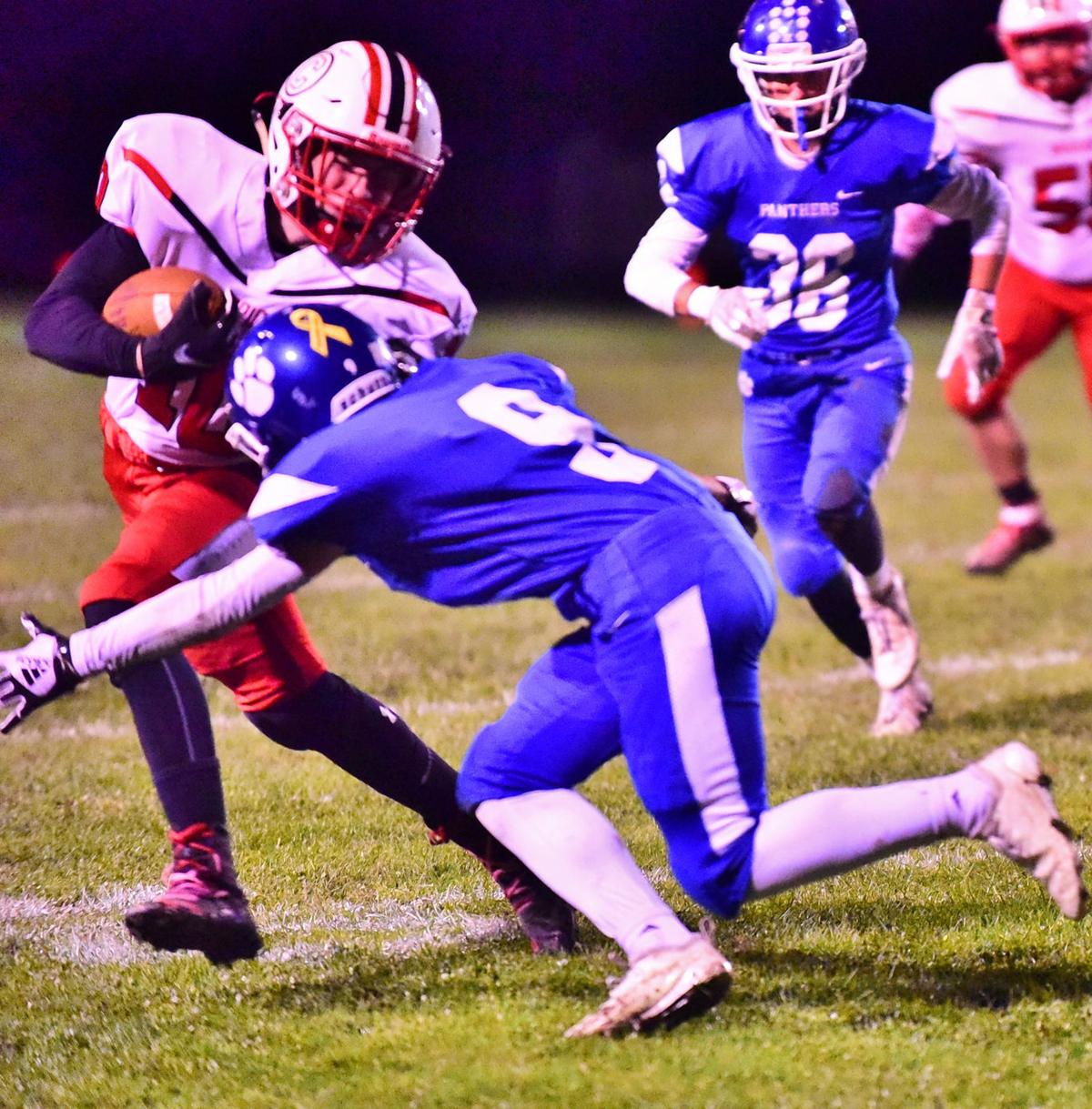 Cameron Fabian comes in for a massive tackle during a defensive battle against the Canton Warriors. 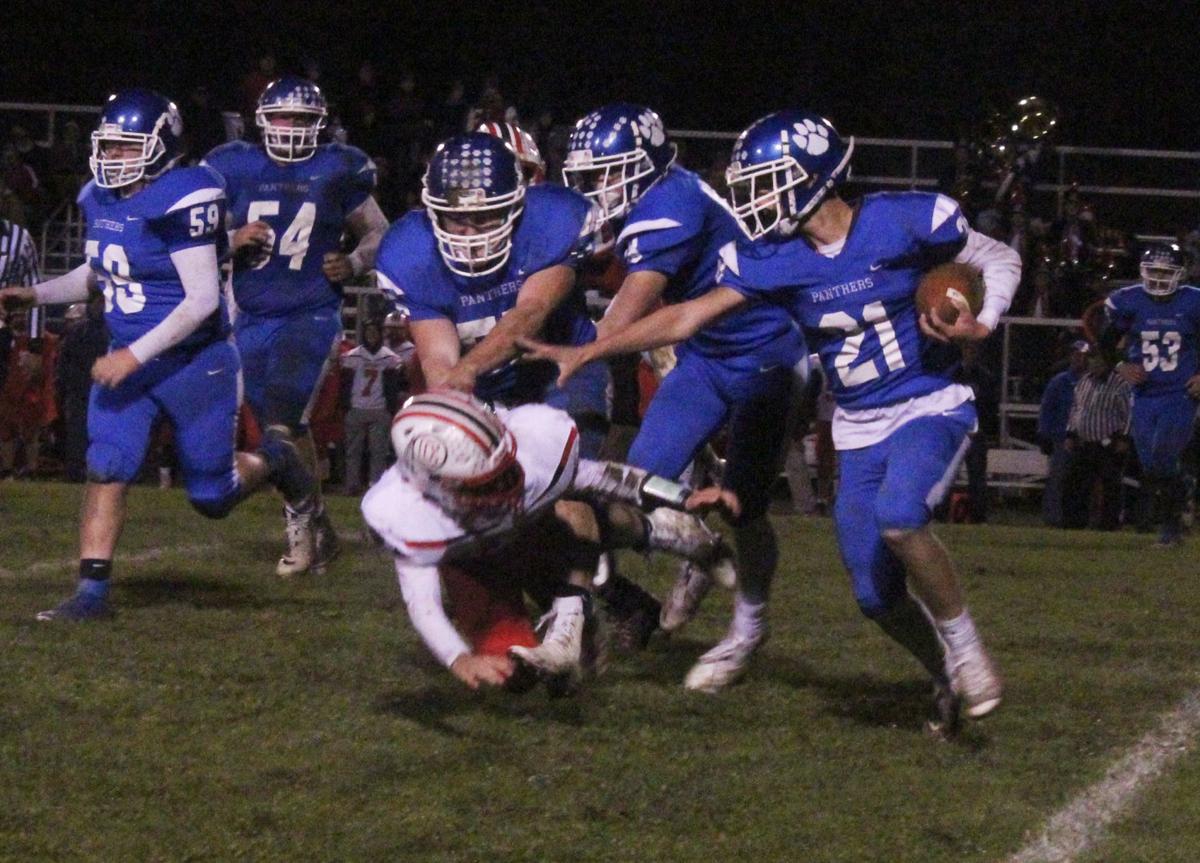 Bryan Bogaczyk finds running room around the left side of the line during a tough loss to the Canton Warriors.

Cameron Fabian comes in for a massive tackle during a defensive battle against the Canton Warriors.

Bryan Bogaczyk finds running room around the left side of the line during a tough loss to the Canton Warriors.

The North Penn-Mansfield football team played the Canton Warriors in a close game, but fell short by a score of 20-7. In a game where the Panthers run game was stifled throughout, they still put up a strong battle against one of the top NTL teams so far in the season.

The score doesn’t do justice to the defensive stronghold the Panthers were able to put on the Warriors through the first three quarters of the game.

The first quarter was all defense from both sides, where neither side budged an inch, with first downs coming few and far between.

The Panther’s team defense was impenetrable, holding one of the best dual-threats in the league in Uriah Bailie in check, and doing a good job of keeping him uncomfortable in the pocket.

Both teams were unable to sustain a productive drive throughout keeping the score knotted at zero through the first quarter of play.

In the second quarter, Canton struck quickly, scoring on a 10-yard touchdown pass for the first points of the night and put the Warriors up 7-0 with 10:36 left in the quarter.

The Panthers were plagued by drops, and it stalled out many promising drives throughout the game and did so on the ensuing drive. After two drops, the Warriors forced another three and out, and the Panthers punted it away once again.

On the kick, the Warriors were unable to keep control, and the Panthers finally caught a break recovering a fumble with excellent field position.

The Panthers found themselves once again unable to capitalize against the strong defensive play of the Warriors and ended up turning it over on downs.

Neither team was able to crack the goal line for the remainder of the half, and even though the Panthers offense was struggling, they were still very much in the game thanks to a strong defensive effort and forcing three turnovers in the first half alone to give them a shot to stage a comeback.

The third quarter was a continuation of the defensive battle that occurred in the first half. On their first possession, the Panthers drove the ball all the way down to the one-yard line and looked poised to tie the game up.

The Warriors then hunkered down and stopped the Panthers on four consecutive plays, for an improbable goal-line stand.

Canton then regained possession on their own one, and started to drive down the field. The Panthers defense continued to wreak havoc on the Warriors ball-carriers, forcing a pivotal fumble with only four minutes left on the clock deep in their own territory to keep the Warriors offense at bay.

After North Penn failed to capitalize on the turnover, they were once again forced to punt the ball away to Canton with only one minute left to play in the third.

Canton started their drive on their own 45-yard line on a drive that took only a few minutes to score thanks to a long pass setting them up on the Panther’s seven-yard line.

Bailie punched it in from four-yards out giving them a 14 point cushion with ten minutes left to play.

The Panthers were in desperate need of some offense, and finally received it on the next drive. With the running game all but shut down through the night, it was up to quarterback Colton Litzelman to carry the load for his team.

The Panthers team quickly moved down the field and Litzelman threw a massively important touchdown pass to Mitchael Tice to get his team back within one score, down 14-7 with over nine minutes left to play.

The Panthers defense was once again called upon to step up and make a key stop, and they were able to do just that forcing a turnover on downs that gave the Panthers a golden opportunity on their own 27-yard line and five minutes left to try and score.

Unfortunately after driving almost 50 yards, the Panthers couldn’t complete a game tying effort, turning the ball over on downs deep in Canton territory with only three minutes left in the fourth quarter. Canton was able to strike again quickly on a long run by Bailie to ice the Panthers in a heartbreaking defeat of 20-7.

Despite the offensive struggles for the Panthers, Litzelman continued to impress, completing 22 passes for 285 yards and his team’s lone touchdown. His statline is even more impressive if you take into consideration his receivers struggled throughout the night to pull in catches, and had nine drops as a group in the game.

Koleton Roupp had himself a monster game for the pass catchers, despite the amount of drops they had.

Roupp had nine catches for a season-high 109 yards. Running back Bryan Bogaczyk also had a solid game as a pass catcher, catching five passes for 92 yards in the contest.

Defensively the Panthers played one of their best games all year long. They did a great job of containing the Warriors run game, and until the fourth quarter did a great job stopping the big plays.

They also forced four first half turnovers that kept their team alive in this game until the very end. Brett Harvey continues to impress, coming up with big defensive performances week after week.

Harvey came up with 11 tackles for the Panthers with 10 of them being completely solo. Harvey has racked up 82 tackles on the year, with just over nine a game.

The Panthers have had a rough two-game stretch, losing two extremely close contests that could have gone either way.

They will need to bring their defensive tenacity back this week if they want to reclaim the Morton F. Jones Trophy as they play their rival Wellsboro Hornets who have won seven straight.

Some sun in the morning with increasing clouds during the afternoon. A stray shower or thunderstorm is possible. High near 85F. Winds SE at 5 to 10 mph.