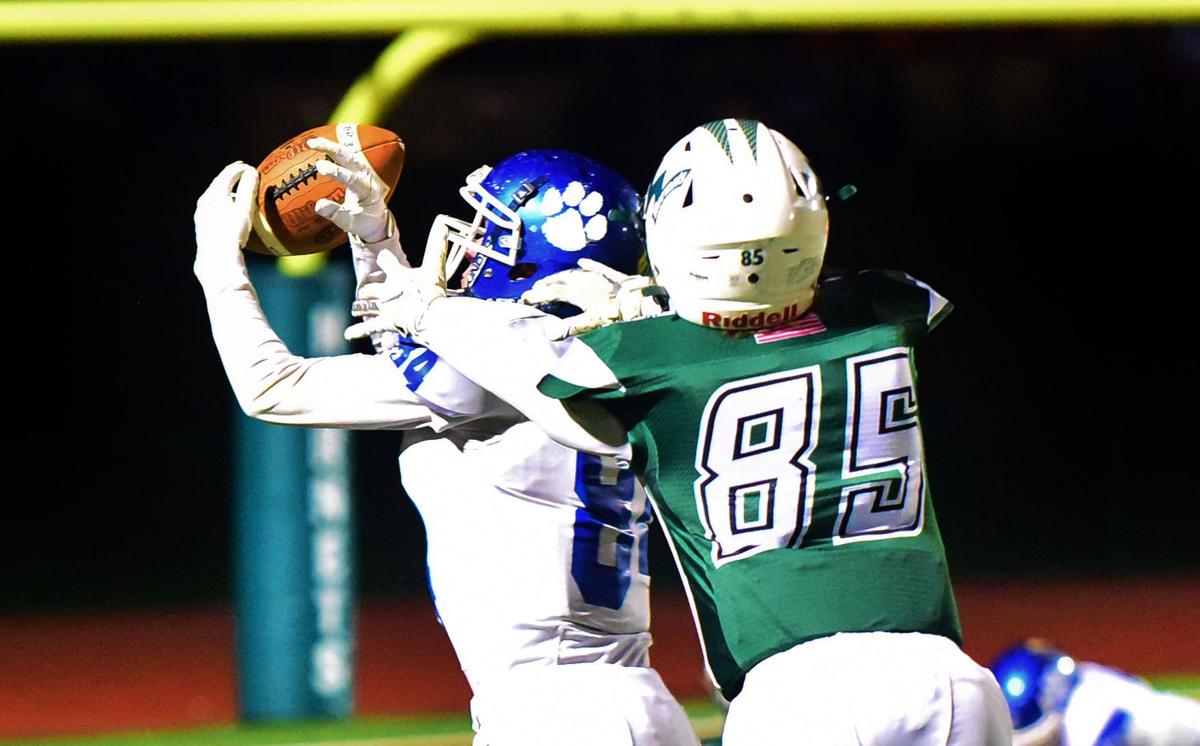 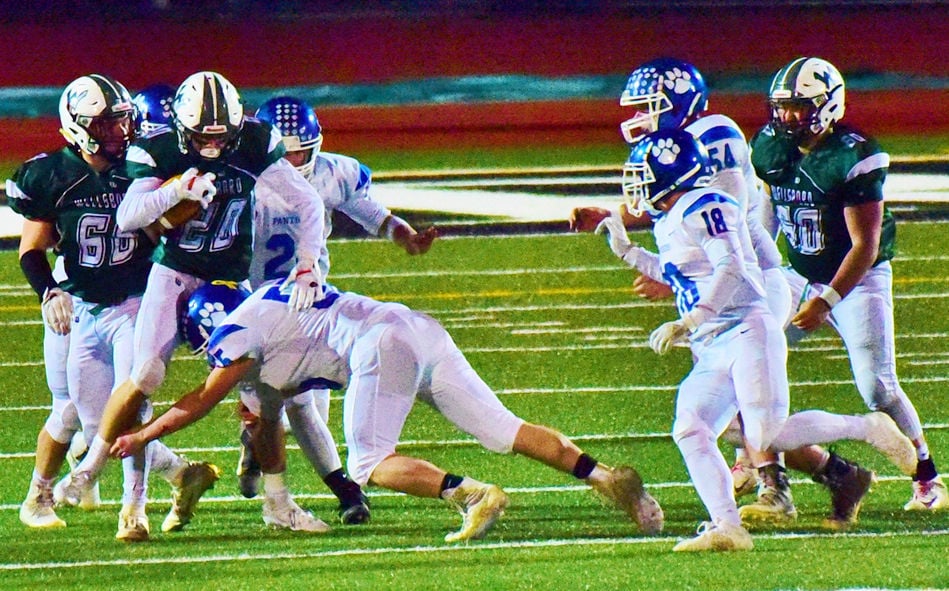 Logan Henry struggles to find room to run against a strong Panthers front during the Panthers 17-14 win against Wellsboro. 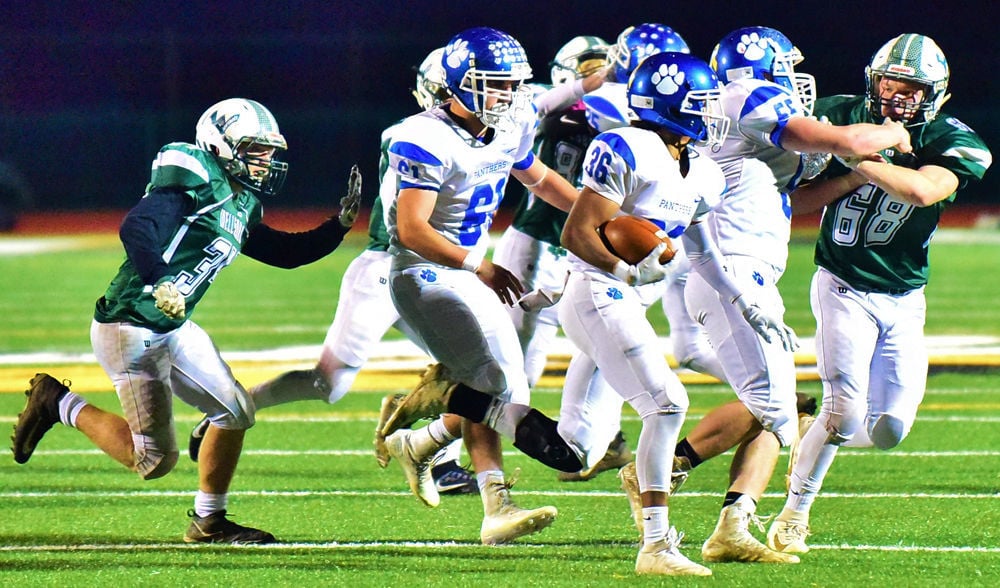 Noah Spencer finds running room around the edge of the Hornets defense during the Panthers district victory.

Logan Henry struggles to find room to run against a strong Panthers front during the Panthers 17-14 win against Wellsboro.

Noah Spencer finds running room around the edge of the Hornets defense during the Panthers district victory.

MANSFIELD -- In a rematch of last week’s regular season finale where the Wellsboro Hornets got the best of the North Penn-Mansfield Panthers by a slim margin, the Panthers avenged the loss in a gritty defensive performance.

The Panthers were able to sneak past the Hornets by a score of 17-14. Turnovers and penalties by the Hornets ended up being their undoing, and the Panthers used the mistakes to their advantage as they came up with a first round playoff win.

The Hornets were without senior running back Aidan Hauser, and the lack of productivity was evident throughout the game. They were still able to rack up 185 yards, but it took 45 attempts to get there, and the lack of a big-play threat in the run-game hindered the Hornets throughout.

The Panthers defense was superb throughout the night, coming up with four turnovers which helped to jumpstart their offense on multiple occasions. They also held the Hornets offense to a season low of 14 points. The Panthers also were able to hold Wellsboro to only 14 first downs, coming up with big stops all night long.

In the first quarter, the North Penn team came out energized, but were unable to get anything going on the offensive side, posting a fast three and out and pinned the Hornets deep in their own territory.

On the Hornets first offensive play of the game, quarterback Isaac Keane dropped back and looked short down the right side of the field when Mitchael Tice snatched the pass out of the air and took it in from 12 yards out for the Panthers first touchdown of the night. The defensive play for the Panthers set the tone for how the game would go for the rest of the night.

Both teams were unable to get their offense started, and besides a defensive touchdown, both teams struggled to string together a drive in the first quarter.

Wellsboro at one point had a golden opportunity from the four-yard line to even it up, but the Panthers denied the Hornets on fourth down with a Cameron Fabian interception to regain possession.

The Hornets were finally able to strike back early in the second quarter, on a long drive that was capped off with a one-yard touchdown run by Alex Burrell, but both teams continued to struggle on offense, the game went into halftime knotted up at seven apiece. With neither team able to take control.

At the opening of the second half, both teams were looking for a spark in order to take control of the game.

The Panthers were able to do just that in the third quarter, when Wellsboro‘s punter struggled to handle a high snap, and after catching it his knee just barely touched the ground, giving the Panthers a huge break and an opportunity to take the lead.

Kevin Alexander, who has been a key contributor to the Panthers team all season long, hit a 22-yard field goal, that the holder was able to make a clutch play to secure after a high snap, right down the middle of the uprights to give the Panthers their second lead of the game.

The turnovers continued to plague the Hornets in a game where things just never went their way, and fumbled on the next possession to give the Panthers another shot to capitalize on a Wellsboro mistake.

The next drive was a pivotal moment for the Panthers, and a chance to take a two possession lead in a defensive struggle. Noah Spencer made the biggest play of the night, and possibly one of the best catches of the season, when Colton Litzelman threw a bomb down the right sideline, that Spencer dove and caught with his body completely outstretched for a 35-yard completion that gave the Panthers a shot at the end zone.

The Panthers recognized their redzone struggles from last week and earlier in the game, and decided to give the Hornets a new look that proved to be effective. The Panthers lined up in a wildcat formation, with Fabian as the quarterback and on their second play, when everyone was expecting some form of misdirection run, Fabian rolled out and threw a pinpoint touch pass over the hands of the Hornet defenders for a touchdown that gave North Penn a 10-point lead and the momentum with just under seven minutes remaining in the third quarter.

The Panthers defense continued to dominate, and as the Hornets drove the length field, had another untimely turnover where the Panthers nabbed another interception in the endzone. The Panthers were unable to capitalize on yet another Wellsboro turnover and were forced to punt after a long drive that pushed into the early part of the fourth quarter.

The Hornets defense was strong all night, but they needed to be able to put points on the board against a tough North Penn defense that was stifling all night. The special teams unit for Wellsboro gave the Hornets a shot late, when Silas Wagaman was able to find a crease on the punt-return and take it 63 yards for a touchdown that brought the score to 17-14 with just under ten minutes to go.

Unfortunately for Wellsboro, the Panthers dominated the time of possession to close out the game, and only gave the Hornets one more possession in the fourth quarter while they milked the clock out and were able to hold on for a revenge victory over the Hornets and a spot in the second round of the district playoffs.

Defensively the Panthers were able to mirror and perfect their game plan from last week, and found a way to stop the run game of the Hornets, and hold them to under 200 yards of rushing offense for just the third time all season and the second time being their performance just last week. The Panthers held Wellsboro to just 185 yards on 41 carries.

The Panthers also were able to win the turnover battle, which played a major factor in controlling the game. The interception returned for a touchdown by Fabian in the first quarter as well as three other turnovers gave the Panthers the advantage throughout the game, despite only scoring one offensive touchdown.

Choplowsky was the difference maker for the Panthers in the trenches, coming up with stop after stop on defense, and controlling the line of scrimmage on the offensive side for his team.

Choplowsky was able to come up with a total of nine tackles in the contest, with one of them being for a loss and had two quarterback hurries throughout. He also caused a fumble and recovered both of the Hornets fumbles in the game to help carry his team to the next round of the playoffs.

Fabian was also a big contributor for North Penn throughout and on defense came up with a key interception in the end zone to go along with two pass deflections for a team that completely shut down the arial attack of the Hornets. He also was huge on offense, passing for the only offensive touchdown for his team during a wildcat formation.

Offensively the Panthers struggled to get much going, but were aided by timely defense and also a stellar performance from Noah Spencer who was a dual threat in the running and passing game throughout the night.

He ran for a team high 51 yards on 10 touches to go along with another 51 yards on four catches including a pivotal catch in the third quarter that set up the lone offensive touchdown of the night on what might be the best catch of the year where he dove forward and snatched it out of the air on an improbable series of events.

On the other sideline, the Hornets outgained the Panthers with 260 yards to only 184 yards, but were plagued by a slew of turnovers and a barrage of penalties that bogged them down throughout the night.

Quarterback Keane struggled through the air and gave up two interceptions and one that went for a touchdown. He was able to do his damage with his legs throughout the game though, racking up 77 yards and a few big scrambles down the stretch that extended drives and gave his team a chance to win.

Wagaman made the games biggest play with a huge 63-yard touchdown that looked like it could give the Hornets a swing of momentum early in the fourth. Burrell also was able to contribute a touchdown on a 1-yard run but it wasn’t enough to win in this one.

Some lingering morning flurries or snow showers. Some clouds this morning will give way to generally sunny skies for the afternoon. High 24F. Winds NNW at 15 to 25 mph.