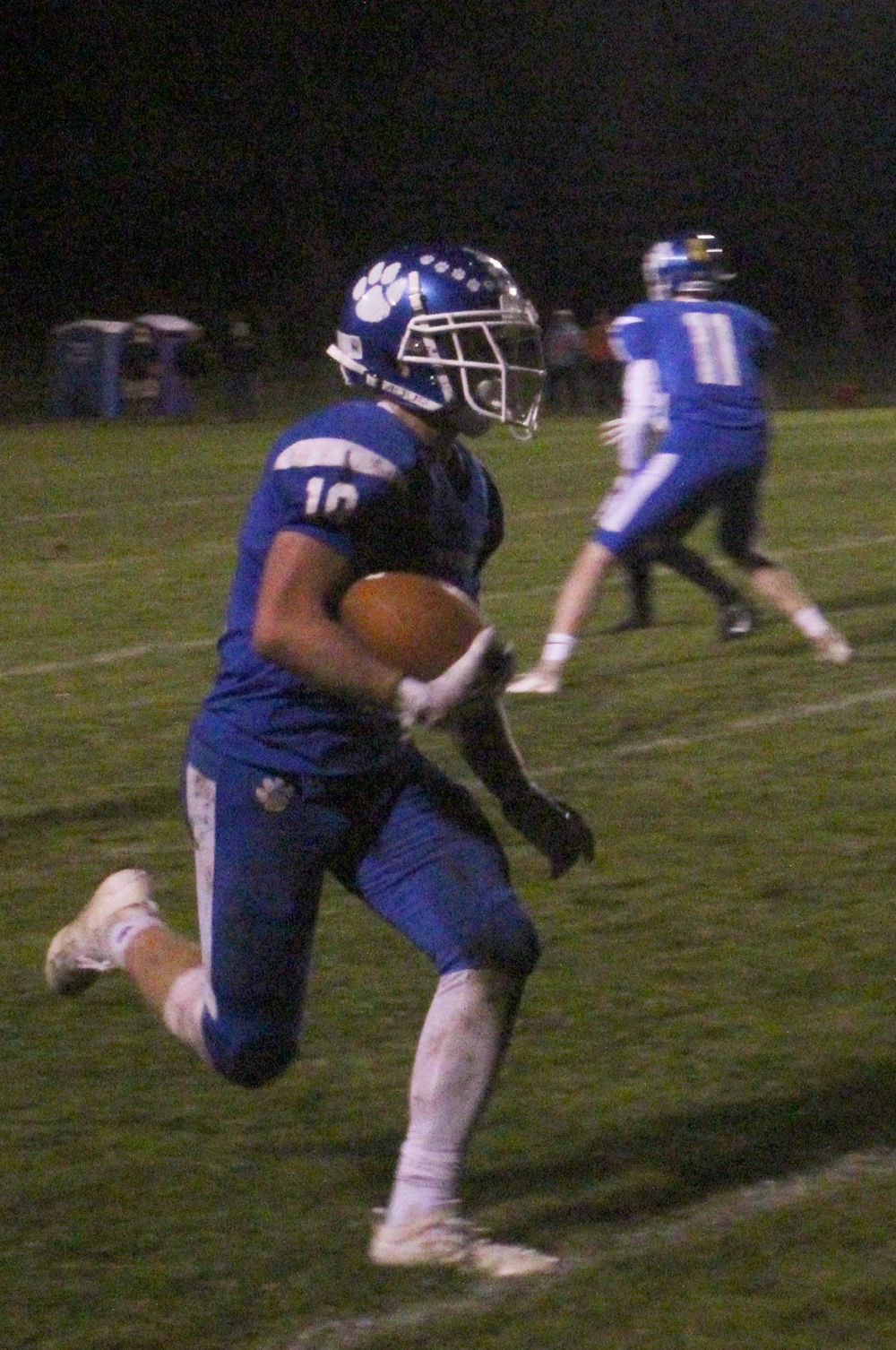 Koleton Roupp takes one of his seven carries down the sideline during the Panthers 32-35 loss against Towanda. 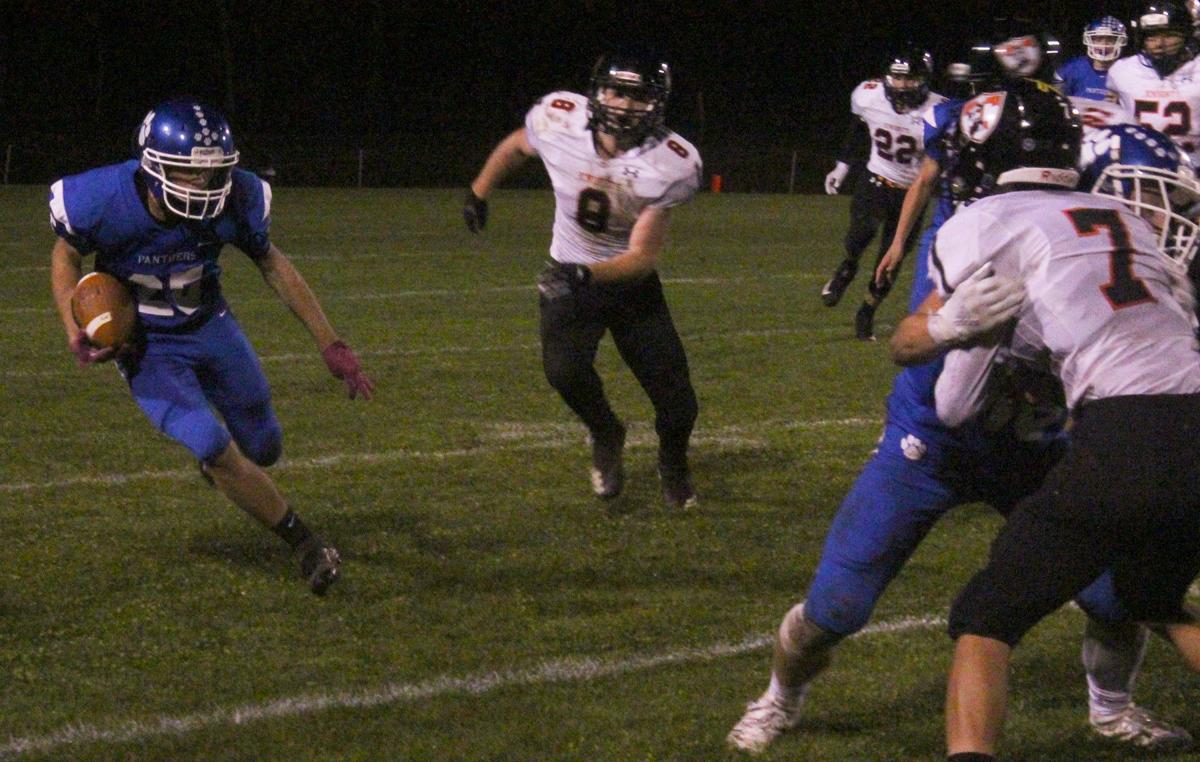 Kaelan Matczak makes a catch and run during the Panthers tough loss in their Homecoming game.

Koleton Roupp takes one of his seven carries down the sideline during the Panthers 32-35 loss against Towanda.

Kaelan Matczak makes a catch and run during the Panthers tough loss in their Homecoming game.

BLOSSBURG — The Panthers rolled into Friday night’s matchup with the Towanda Black Knights on a three game winning streak and were moving in the right direction after starting the season 1-3. They were unable to capture a fourth straight win and fell in a tightly contested game 35-32.

The first quarter started off rough for the Panthers, who after fumbling and recovering the opening kickoff, fumbled once more on the first offensive play of the game, giving the Towanda team excellent field position. Towanda capitalized early on the strong field position and punched in a two-yard touchdown to strike first and put the score to 7-0 early in the first.

The Panthers offense continued to struggle in the first quarter, making a few uncharacteristic mistakes on their next drive but were given new life when Kaelan Matcak came up with a crucial interception on defense and rumbled all the way down to the Towanda two-yard line on a 49-yard return.

Bryan Bogaczyk plowed through the Towanda defensive front and tied the game at seven apiece with only 10 seconds remaining in the first quarter.

The next quarter’s scoring was opened up on a 35-yard catch and run by Towanda for a touchdown, bringing the score to 13-7, and the Panthers needing a response if they wanted to keep their chances alive.

The Panthers stormed down the field and in only 50 seconds were able to answer with a touchdown pass of their own from Colton Litzelman to Logan Tokarz from 10-yards out. After the extra point by Kevin Alexander the Panthers took their first lead of the game after starting out a bit slow.

Both teams traded possessions late in the second but neither were able to come up with any points. The Panthers had one final shot to score at the end of the first half and moved their way down the field as the clock ticked down. They were able to push the ball all the way down to the 10-yard line before facing an important fourth down play only up by one point.

The Panthers lined up for a field goal, and fooled everyone when the holder pulled the snap and rolled out to the right side of the field. Under pressure he was able to dump it off to Koleton Roupp, who was able to work his way around three defenders from eight yards out and punch it in. Unfortunately it was called back on a heartbreaking penalty negating what could have been the turning point of the game.

The Panthers went from scoring a touchdown to not being able to come up with any points on the possession as the game shifted to the second half of play.

Towanda was able to open up the scoring, connecting on their second touchdown pass of the night and converting on the two-point conversion gave the Black Knights a 21-14 lead early in the first half.

On the next drive, the Panther’s squad struck right back when Bogaczyk broke free and scored on a long 39-yard run to even up the score at 21 in a game that was back and forth all night.

Both teams entered the final quarter of play with 21 points in a tight game that looked like it could come down to the wire. Kevin Alexander from the Panthers was able to punch in a long 32-yard field goal in the opening minutes of the fourth quarter to give his team a slim lead with only 11:29 remaining.

Towanda fired back shortly with back-to-back touchdown runs to give them an 11 point lead and the Panthers needing to put up points quickly.

The Panthers scored late with Litzelman able to complete his second touchdown of the night, this time to Roupp. They were able to convert the two point conversion but only had 40 seconds to gain possession and at least try for a field goal.

The Panthers were unable to do so and fell just short against the Towanda team falling by a final score of 35-32 in their Homecoming game.

Even in the loss, the Panthers offense continues to roll heading into the late stages of the season. The Panthers have scored at least 30 points in their last four contests with a record of 3-1 in those games.

Litzelman has had an outstanding first year of his quarterback career, topping 1,000 yards and throwing for his twelfth touchdown of the season in the loss. Litzelman completed 14 passes for 194 yards and two touchdowns in the effort.

Bogaczyk once again led the committee of running backs for the Panthers, with 69 yards and two touchdowns on the night on only 12 carries. Roupp also had a strong performance on the ground coming up with 49 yards on only seven carries.

Defensively the Panthers allowed more points in this game than they have since their loss to Troy, but were once again led by the tackling machine Brett Harvey who amassed an incredible 12 total tackles for the Panthers. Logyn Choplosky also help hold the defense up, racking up 10 tackles on the night and one tackle for loss. Coleman Jelliff was a constant disruption on the opposing quarterback for the Panthers, with three hurries, one sack and nine totals tackles throughout the game.

The Panthers team will need to buckle down over these next two weeks, when they host two of the top NTL teams in their last two games of the season.

Sitting at 4-4 winning or losing out could make or break their chances of moving on to postseason play. The Panthers will first host the Canton Warriors on Thurs. Oct. 17 at 7 p.m. and then they will host their rival Wellsboro Hornets on Friday Oct. 25.