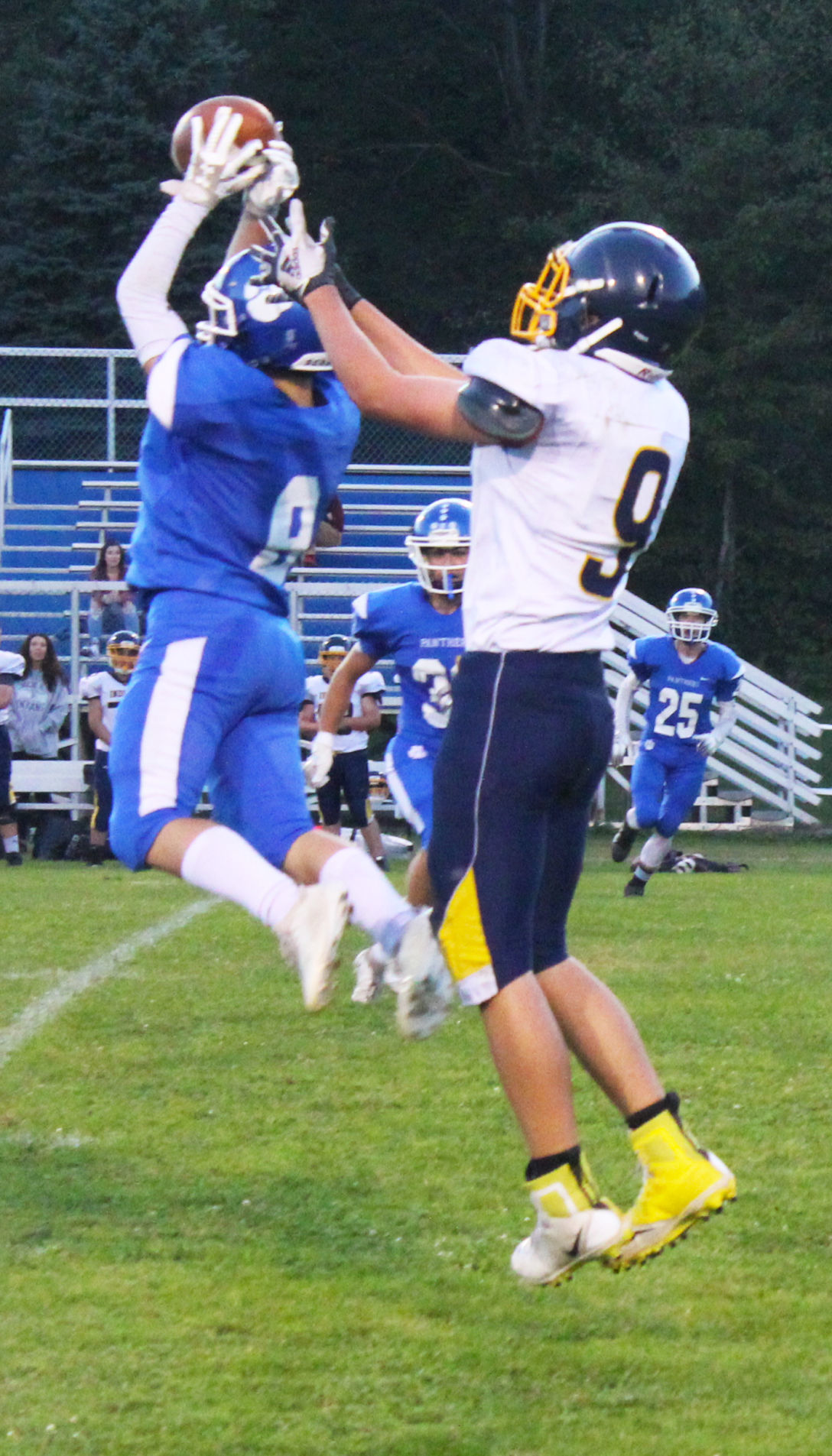 Cameron Fabian snatches an interception from Jacob Schmitt in a Panthers win against the Indians.

Koleton Roupp takes the ball up the middle against the Indians on his way to a four touchdown performance.

Cameron Fabian snatches an interception from Jacob Schmitt in a Panthers win against the Indians.

Koleton Roupp takes the ball up the middle against the Indians on his way to a four touchdown performance.

BLOSSBURG — Following a tough loss to Troy on the road, the North-Penn Mansfield Panthers football team captured their second win of the season in a commanding victory against the Cowanesque Valley Indians on Friday night.

As the game progressed, the Panthers offense started to click. In the opening minute of the second quarter, running back Koleton Roupp broke free for a 33-yard touchdown run to open up the scoring and push their lead to 6-0. Roupp continued to have a breakout performance, scoring another touchdown, only this time on a 19-yard reception from quarter Colton Litzelman with 8:27 remaining in the half.

The defense for the Panthers was suffocating all night, coming up with stop after stop, against a team that has thrown the ball extremely well all season. The Indians had averaged 165 yards through the air per game this season, and hadn’t thrown an interception, but the Panthers held the air assault of the Indians to under 120 yards and forced four interceptions on the night. Going into halftime the Panthers held a lead of 13-0 and were looking to create seperation from the Indians moving forward.

In the third quarter the Panthers offense started to roll, and halfway through the quarter Roupp caught his second touchdown of the night, for an 19-yard score to bring the score to 20-0 with 6:22 to play in the third.

The Panthers offense scored two more times in the quarter, with Roupp scoring his fourth touchdown of the night a few minutes later, and freshman Kohen Lehman taking a 50-yard touchdown in with 2:50 left to bring the score to 34-0 to close out the scoring in the game.

The Panthers played a sound game on both sides of the ball, with a tenacious defense that only allowed 254 yards, forced four interceptions, nine tackles for loss and four sacks. The Panthers were led by junior Brett Harvey who tallied nine tackles and one sack and Logyn Chaplosky who racked up five tackles to go along with two sacks. In the secondary sophmore Cameron Fabian was a hawk, securing two interceptions in the contest. They also put on their first shutout performance of the year while securing their second victory of the season.

The offense was slow to start, but once things came together they put together a balanced attack. Litzelman continues to have a great season after stumbling in last week’s matchup against the Troy Trojans, he put together a strong performance completing 14 passes for 195 yards and two touchdowns. Roupp had his best game of the season, stepping up in relief to injured Noah Spencer, and was extremely versatile in not only the running game but also the passing attack.

Roupp compiled 63 yards on only five carries and took two of them for touchdowns. Roupp also caught six passes for 84 yards and scored two touchdowns to bring his total to four. Bryan Bogaczyk continues to be the steady back for the Panthers offense, with 68 yards off of 11 carries on the ground and also added a reception for four yards as he led all rushers for his team.

Brandon Thompson also added another stellar performance with five catches for 95 yards on the night.

The Panthers will need to build on this performance in order to get back to .500, when they travel to Wyalusing to take on the Rams in a battle between 2-3 teams. The Panthers started the season with a brutal stretch of schedule facing teams with a combined record of 12-8, but have a much more favorable stretch coming up in the next few weeks. The Panthers will visit the Wyalusing Rams Friday, Sept. 27 at 7 p.m. in Wyalusing.