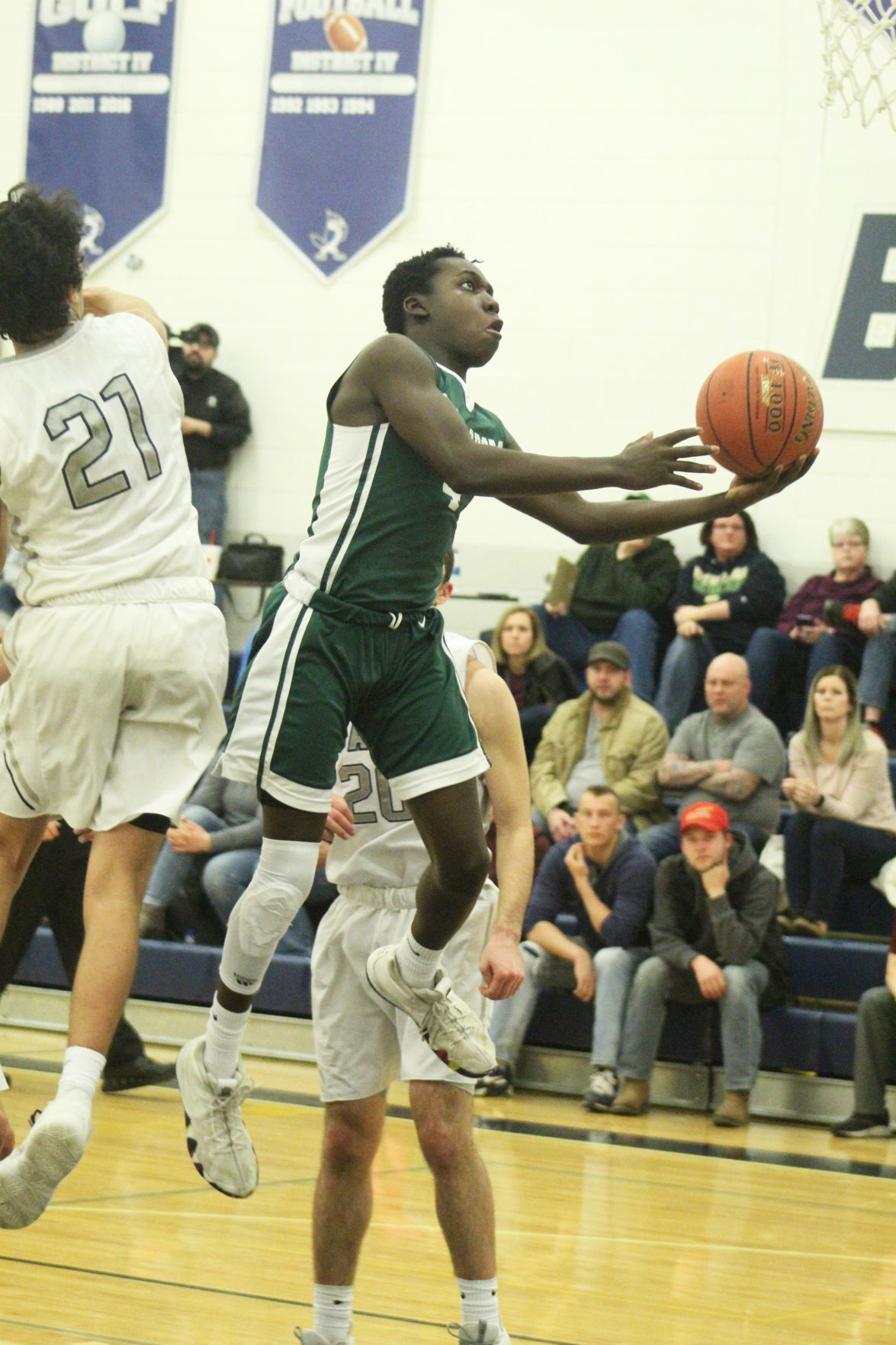 Joseph Grab goes up for a tough layup during the Wellsboro Hornets first-round district playoff loss to Central Columbia on Thursday, Feb. 20. 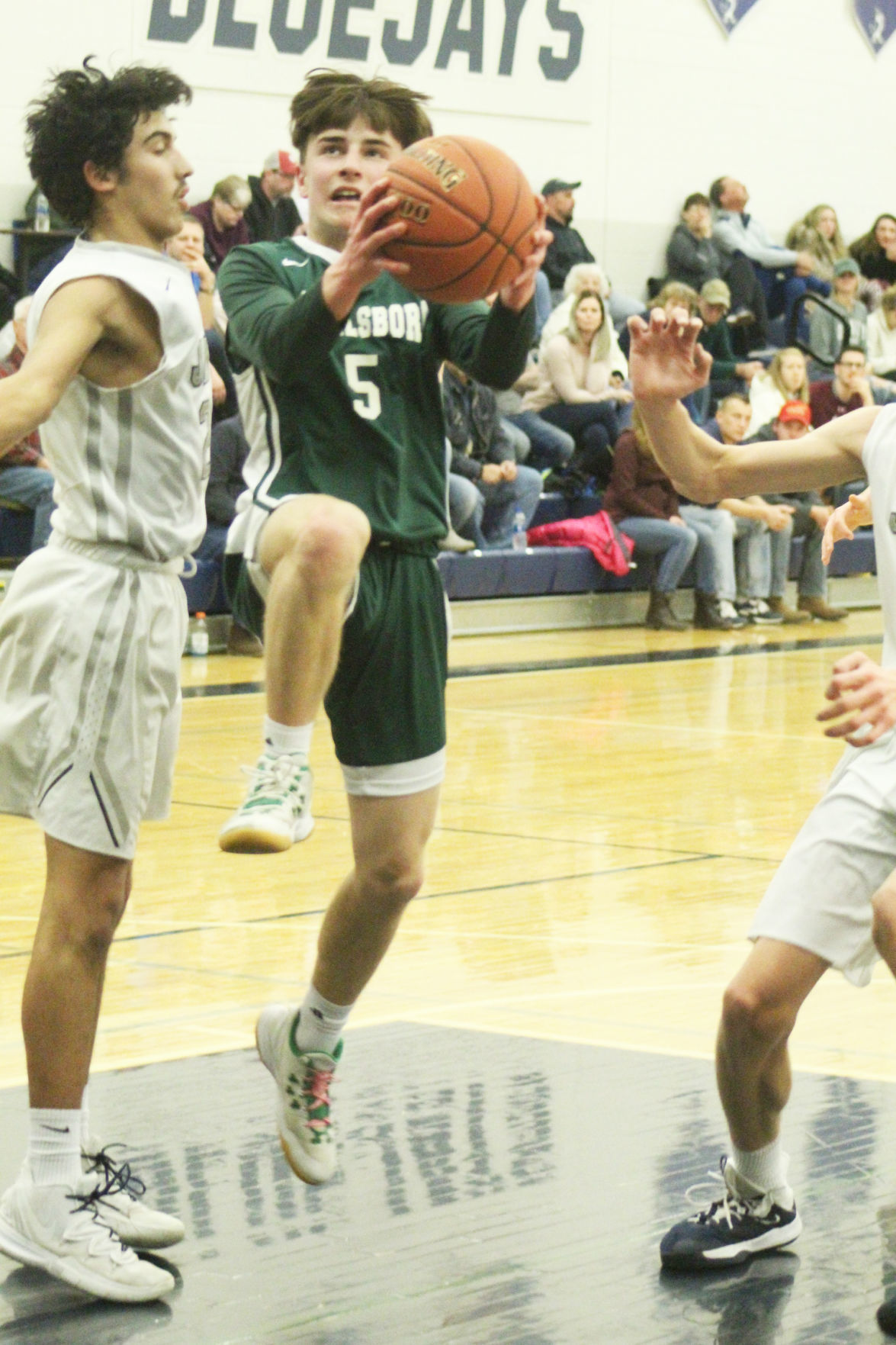 Conner Adams goes up for a contested layup during the Wellsboro Hornets first-round district playoff loss to Central Columbia on Thursday, Feb. 20. 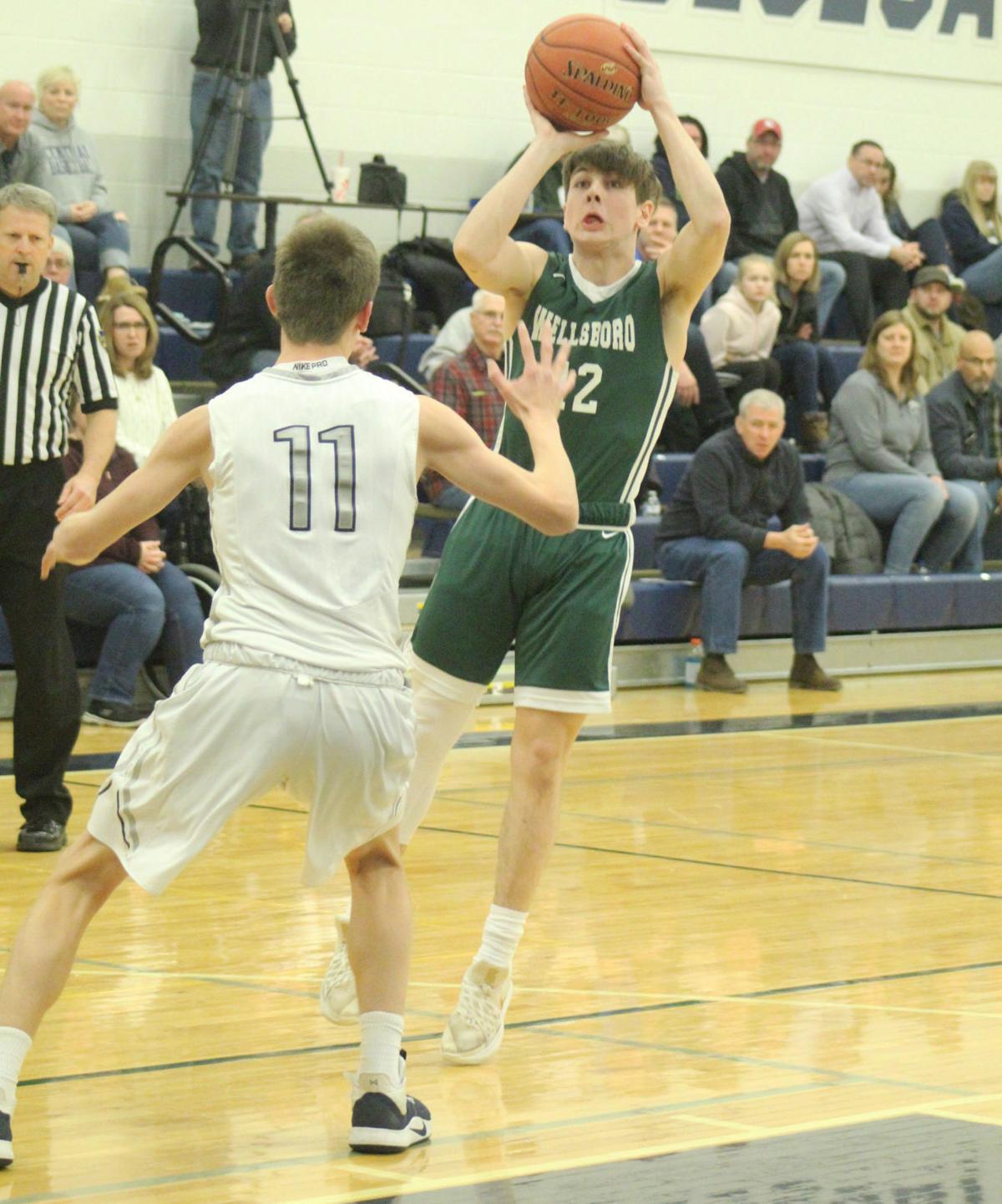 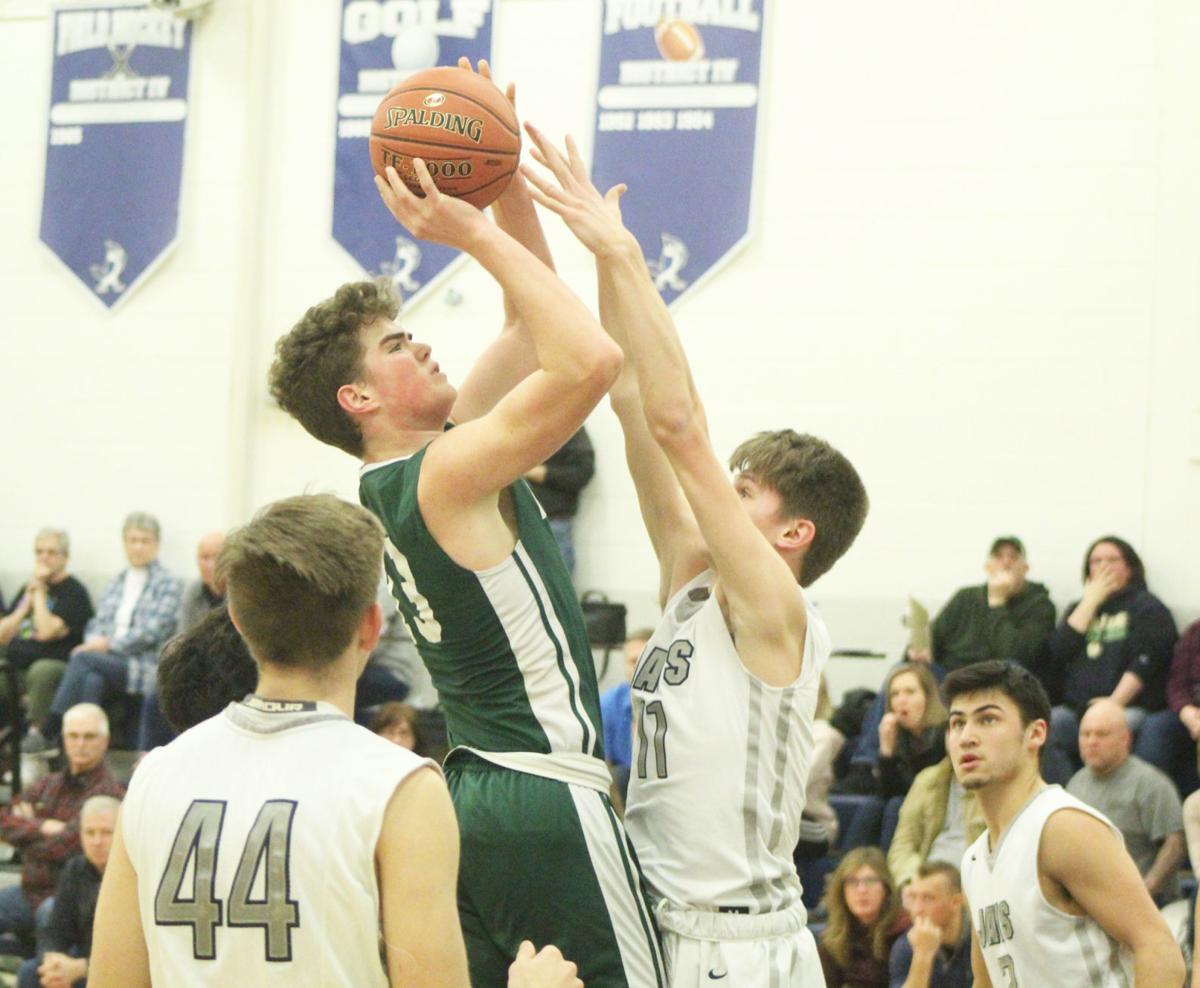 Liam Manning rises over the defense for a shot during the Wellsboro Hornets first-round district playoff loss to Central Columbia on Thursday, Feb. 20.

Joseph Grab goes up for a tough layup during the Wellsboro Hornets first-round district playoff loss to Central Columbia on Thursday, Feb. 20.

Conner Adams goes up for a contested layup during the Wellsboro Hornets first-round district playoff loss to Central Columbia on Thursday, Feb. 20.

Liam Manning rises over the defense for a shot during the Wellsboro Hornets first-round district playoff loss to Central Columbia on Thursday, Feb. 20.

BLOOMSBURG — The young Wellsboro Hornets basketball team (12-11) took the second seeded Central Columbia Blue Jays (18-5) to the brink, and with the scored tied at 49 heading into the final quarter, were doomed by turnovers and fell by a score of 74-65.

Wellsboro played one of their most resilient games of the season. Against a team that across the board had a major size advantage, the Hornets found ways constantly to fight back from any run thrown their way.

In the first quarter, the Blue Jays opened the game up on a 10-2 before Joseph Grab knocked down a deep three-pointer to bring the deficit to just five. This play sparked one of the many runs for the Hornets that seemed to come out of nowhere when Central started to pull away.

After back to back three-balls from Isaac Keane and another from Conner Adams, Wellsboro found themselves only down two points to the second seeded Blue Jays with the score at 18-16.

Central continued to attempt to bury the young Hornets, and went on another small 5-0 run it looked like the Blue Jays would have a seven point advantage heading in the second frame, but Grab made a heads-up play to get a shot up with only 0.1 seconds remaining and draw contact on three-pointer.

After sinking all three, Wellsboro was able to gain some momentum and push the score to 23-19 after an explosive first quarter from both teams.

After some back and forth in the opening minutes of the quarter, Central Columbia was able to extend the lead to 30-21 after a big three-pointer and forced a Wellsboro timeout.

Coming out of the timeout, the young Hornets were energized and started to continue chipping at the lead. Darryn Callahan came out and knocked down a three-pointer after the timeout that started the Wellsboro run.

Liam Manning made some extremely important plays as well, and cleaned up a few missed shots with offensive rebound putbacks that helped Wellsboro in their attempt to knock down Central Columbia.

At the end of the half, Wellsboro ended the quarter on a 15-9 run that dwindled the lead to just three points headed into halftime, 39-36.

Coming out of the break, Wellsboro struggled and their youth started to show with a few costly turnovers that allowed Central to once again build a lead. After falling behind 42-36 Adams opened up the scoring for the Hornets hitting a tough bucket that seemed to spark another big Hornets run.

Manning continued to be huge for the Hornets, and despite a clear advantage size-wise, Wellsboro continued to feed him while he crashed the board all night long helping them to scratch and claw back into game.

After a slow climb, Wellsboro finally was able to tie the game up for the first time since the score was tied at two on a Manning move in the post that drew a foul and converted the three-point play to knot things up at 49.

In the fourth, turnover and mental mistakes doomed the Hornets, and foul trouble caught up to them near the end. With two separate back-court turnovers and a few unnecessary fouls, Wellsboro wasn’t able to claw back in late as Central Columbia outscored Wellsboro 25-16.

Grab led all Hornet scorers with 24 points, and hit some extremely tough shots throughout the night despite seeing double and sometimes triple teams in an attempt to stifle one of the best scorers in district four basketball. His breakout junior season should be a huge positive for the Hornets coming into next season with Grab dedicated to constantly improving everytime he touches the hardwood.

Adams also added 10 points in the loss, and has played as good a season as anyone could have hoped for, constantly improving his game every time he set foot on the floor. As a freshman he will be a player to watch over the next four years as his work ethic is clearly seen on the floor from game to game.

Manning also added nine points and 10 boards, and despite not having monster numbers was easily one of the most important players on the floor for the Wellsboro unit.

Callahan also had a strong night, with seven points and hit a big three-pointer that helped spark a run for the Hornets when they found themselves behind.

Keane was also about to net six points on back-to-back three-pointers in the first half. The Hornets bench was led by Ty Morral and Andrew Larson who added six and three points respectively to round out the scoring for the Hornets.

“The nice thing about this season is I thought all the players showed growth in aspects of their own game and as a team,” Coach Steve Adams commented, “As they gain experience I believe you will see more consistency. We also saw that there are areas that they all still can improve in individually and as a team. The nice thing about this team is that they are coachable and want to get better. They have good chemistry and they are willing to put in extra time individually and as a team. The more we play together the more they know what their teammate will do and that is huge in basketball. I think we can build upon our strengths and we can fix our weaknesses between now and when next season begins. I believe this team is still moving upward and will get better and better and the experience we gained by playing together all season will put us in a better spot to start the next season.”

With all five starters set to return next year, the Hornets have a strong foundation to build on as they look to continue their growth as an unit.