The Wellsboro soccer team’s season ended in a tough shutout to the top seeded Lewisburg team in a 6-0 loss on Wednesday, Oct. 29. 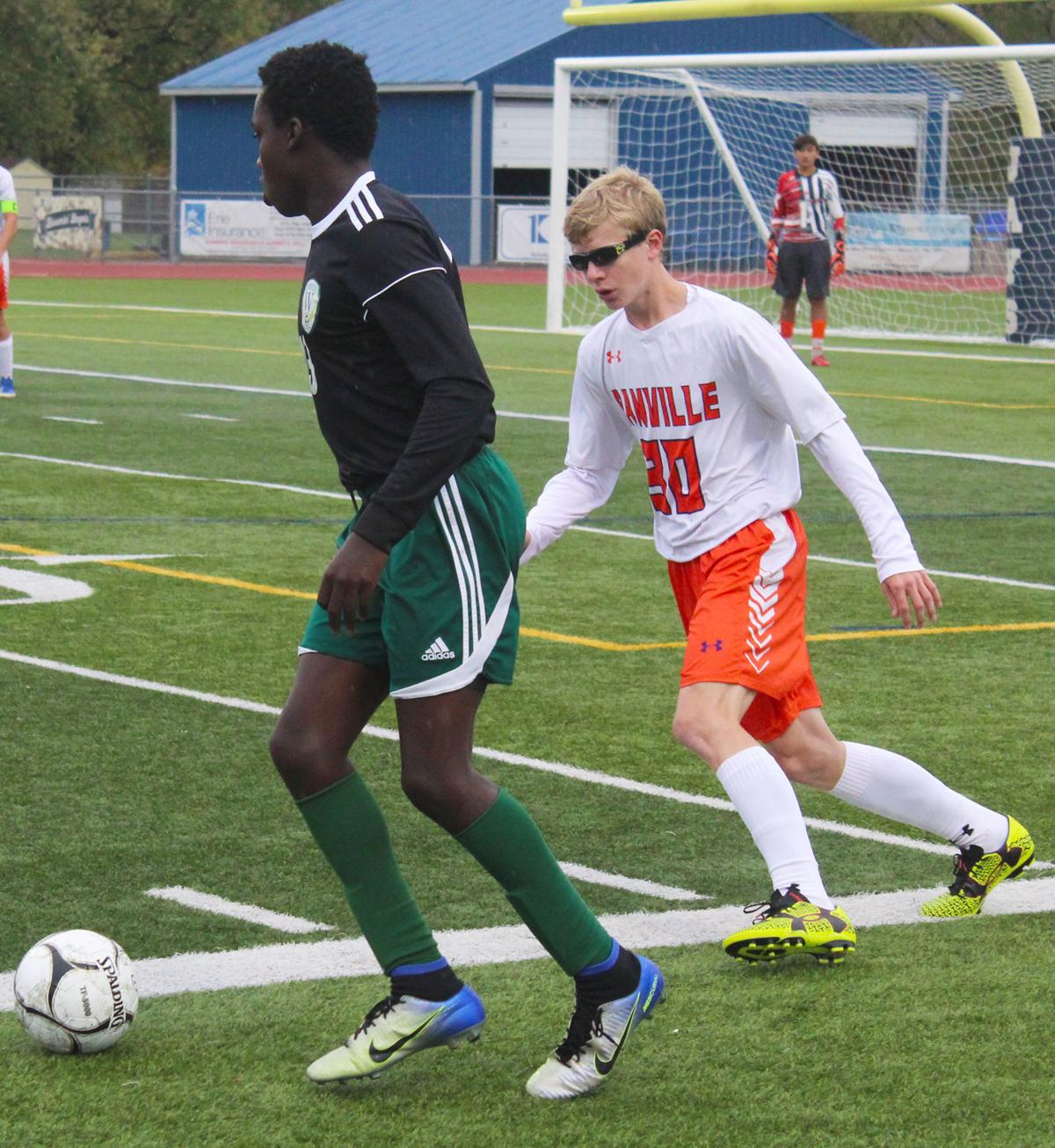 Joseph Grab was able to score the game deciding goal against the Danville team during their first round district victory.

The Wellsboro soccer team’s season ended in a tough shutout to the top seeded Lewisburg team in a 6-0 loss on Wednesday, Oct. 29.

Joseph Grab was able to score the game deciding goal against the Danville team during their first round district victory.

In a battle between the Wellsboro Hornets (13-5) and the Danville Ironmen (11-5-2) the matchup boasted a very even matchup in terms of records coming into the game.

Wellsboro boasted one of the most potent offenses in district play scoring just over six goals a game, and Danville has one of the toughest defenses in the area allowing only .7 goals per contest.

The first round matchup between these teams is likely one of the most interesting first round district matchups to dissect.

The Hornets are led on the offensive end by junior forward Kaeden Mann, who has scored 24 times this season while also dishing out 13 assists.

Will Poirier also has been a key factor in the offensive production of the Hornets squad, with 16 goals on the season to go along with a jaw-dropping 30 assists on the season.

Both players have been the engine of the Hornets offense that has allowed them to put up one of the highest goals per game total in the league.

Danville’s approach to success is a much different story, relying on a stingy defense that allows less than a goal per game to propel them to victory.

Freshman Evan Haas has been a brick wall for the Ironmen, recording 101 saves on the season and only allowing 12 goals all year long. The Danville team has shut out 11 teams so far this season, and the most goals they have allowed in a contest is four.

With both teams strengths mirroring their opponent, the matchup had a lot of appeal to who would get the best of who. The matchup built up the question of, what will bend first, the Hornets offense, or the Danville defense.

The match lived up to the hype with a closely contested game where both teams showed why they are both highly respected for their specific strengths.

In the opening half of play, both teams struggled with the wet conditions, and footing and control was a major issue for both sides. The Hornets struggled to convert on their chances early, with the Danville goalkeeper making a lot of tough saves throughout.

The game remained scoreless until the closing minutes of the first half, where Hornets leading scorer Mann was able to slip a shot by the tight Danville defense and open up the scoring for both sides going into the half.

In the second half, Danville came out with a new energy, pressuring the Hornets defense more consistently and were able to take control of the tempo for the first time all game.

Danville was finally able to spark their offense at the halfway point of the second half, when they were able to set up a header on a direct kick that knotted the game up at one apiece and gave a bit of a gut check to the Hornets.

With the score tied, both teams showed a sense of urgency down the stretch, with play getting more aggressive throughout.

The Hornets offense was bound and determined to end the game in regulation, but the Danville goalkeeper continued to deny the Hornets continuously down the stretch.

After two strong shots on goal, and the Danville keeper denying both, he went down with an injury that ended up being the deciding factor in the contest. Soon after, Joseph Grab came up with the play of the night, coming up with a big goal on a header

that gave the Hornets a 2-1 lead with just over seven minutes left to play. “We had an opportunity there, when Danville had a new keeper and so then it just came down to execution, and executing a set piece” coach Todd Fitch commented on his team being able to capitalize on the change of personnel.

The Hornets defense remained steady and shut down Danville during the remainder of the contest in order to secure a victory and spot in the semi final district contest.

“I think it just gives us momentum, I believe that we’re still doing the right things and we just need to keep working, we play Lewisburg and I think we are going to look at some things, and we’re going to give them everything we got and then just see what happens at the end,” Fitch said on the upcoming matchup against the top seeded team in the bracket.

The matchup with Lewisburg was a daunting task for the Hornets, with Lewisburg coming into the contest with an 18-0-1 record on the season, and are one of the top ranked teams in the whole state.

The Hornets would need to play their best all-around game of the season if they hoped to be able to give Lewisburg their first loss on the season.

Wellsboro allowed their most goals all season long, against an opponent regarded as the favorite to win the AA district division by a large margin.

Despite allowing six goals, goalkeeper Ethan Ryan did his best to keep things in front of him recording nine saves during the game. Despite the loss, the Hornets finished the season with a record of 14-6 and one district playoff victory during the season.