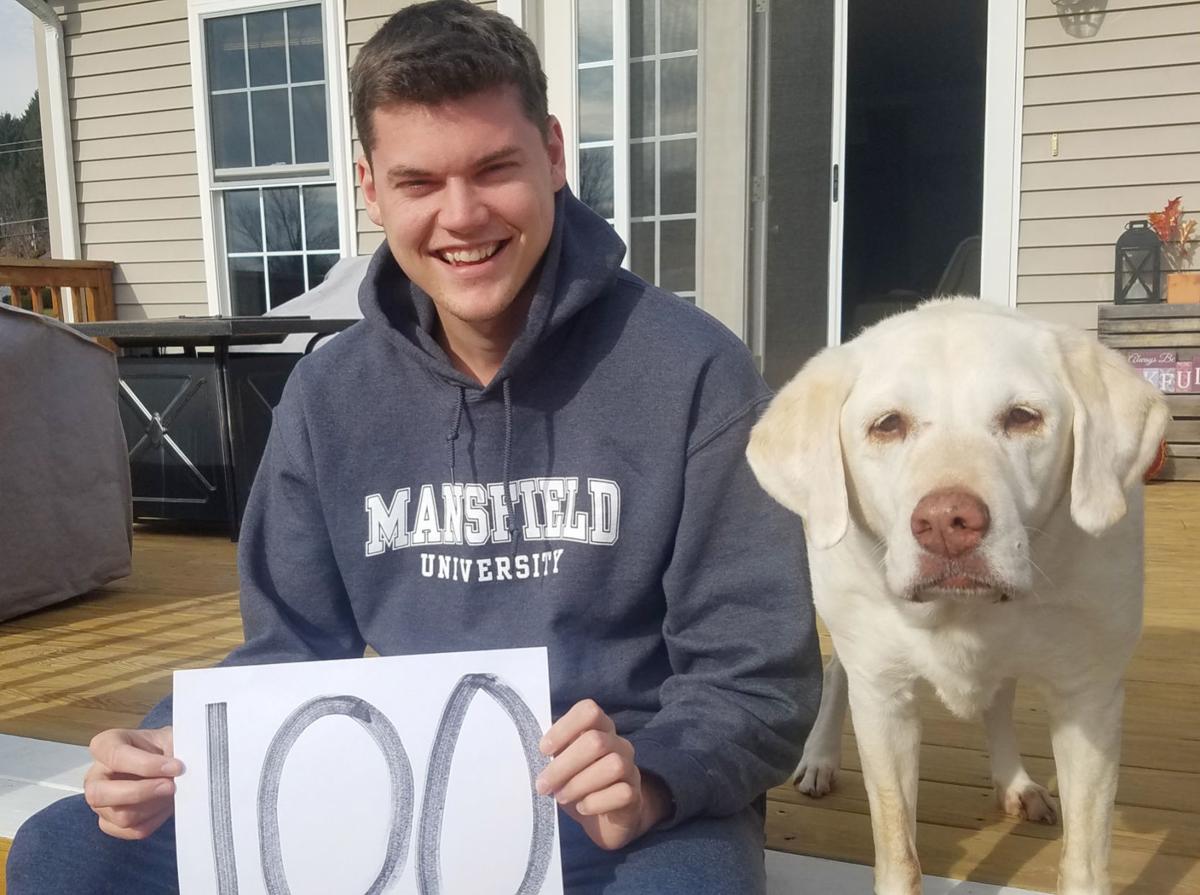 Following the procedure, Zach McCloskey has not had a seizure in more than 150 days. Here, he is pictured with his dog Daisy, celebrating 100 days seizure-free. 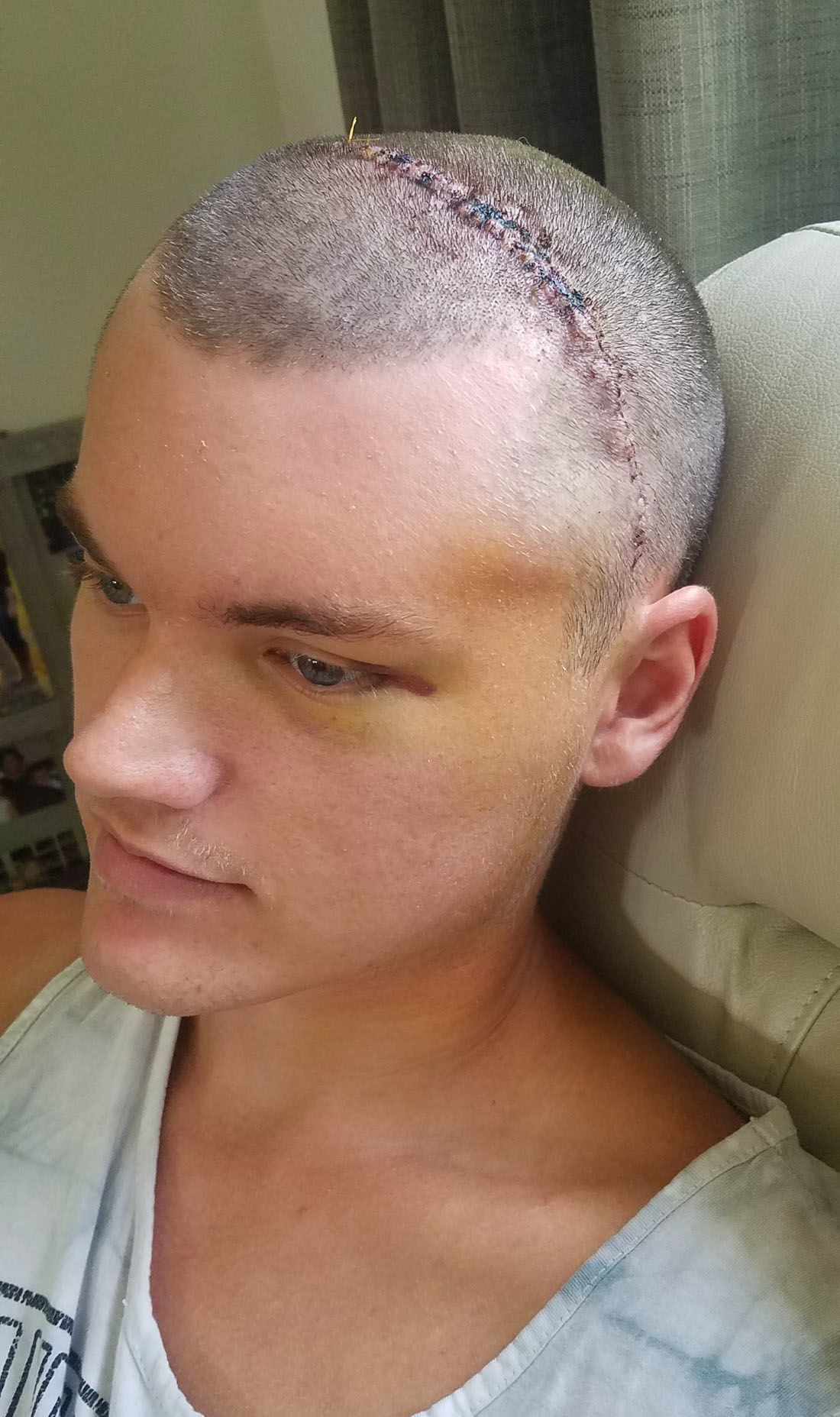 Since the surgery to remove a part of Zach’s brain, he has been seizure-free.

Following the procedure, Zach McCloskey has not had a seizure in more than 150 days. Here, he is pictured with his dog Daisy, celebrating 100 days seizure-free.

Since the surgery to remove a part of Zach’s brain, he has been seizure-free.

Zach McCloskey was nine years old when he was diagnosed with epilepsy. It was a diagnoses that changed his life and led to a decision 11 years later that would put his life on the line.

It was September 2008 when Zach was diagnosed with epilepsy. His father, Steve McCloskey recalls the morning.

“I was preparing to go to work at (Mansfield) University. The Wall Street Journal was coming on the campus and it was a big day for me,” Steve said. “My daughter said there is something really, really, wrong with Zach and you need to come upstairs right away.”

Entering the bedroom, Steve’s thought his son was dead. Zach’s head was tilted back, foam bubbled from his mouth and his eyes were rolled back. Steve’s wife Pam was on the phone with 911. After an ambulance ride to Soldiers and Sailors, Zach was referred to Geisinger Medical Center in Danville by his pediatrician, Dr. Barry Clark of Wellsboro. It was at Geisinger, Zach was officially diagnosed with epilepsy.

“The words shocked us because you just don’t expect that,” Steve said. “(The doctors) thought that Zach would outgrow it and, of course, we wanted to hear that. So, we started him on a series of medications.”

There was some degree of success with medications. Zach would start a medication and, for a few weeks, his seizures would abate. But as his body grew accustomed to each new medication, the seizures would begin again.

With each new medication, the McCloskeys’ hope would rise, only to fall as Zach outgrew each medication.

Despite the frequency of Zach’s seizures, Steve and Pam were determined that their son would still have as normal a childhood as possible. In high school, he played soccer, spent time with friends and participated in school events.

“We did everything we could, but he would end up missing incredible stretches of time at school,” Steve said.

As different medicines wore off and his seizures increased, Zach’s fear of having a public seizure intensified. He would often retreat to his room, where he felt safe and comfortable.

“Life with epilepsy was like I never really knew when I was going to have one (a seizure) until about 10 seconds before,” Zach said.

Though high school was a trying time for Zach with the frequency of his seizures, it could have been much worse were it not for his support system.

“Our school system here in Mansfield was exceptional. At Warren L. Miller through the junior high and senior high school, both teachers and administrators extended Zach great courtesies to achieve and to graduate,” Steve said.

While in school, Zach’s doctor at Geisinger suggested looking into surgery as his condition became intractable. Zach and his parents decided to get a second opinion. An appointment at Johns Hopkins resulted in a referral to the Children’s Hospital of Philadelphia where he received treatment from Dr. Christina Bergqvist. Treatment was continued at CHOP until all medical options had been exhausted. The epilepsy was intractable, leaving just one option to eliminate the seizures: surgery.

Now an adult and attending college, Zach decided to repeat earlier electroencephalogram, in the hope that the brain scan would determine where seizures were originating. Then, doctors could decide what the best option was for treatment. Zach postponed the start of his second year of college for the procedure.

After years of trying to mitigate his seizures, doctors were now asking Zach to try and have a seizure so they could trace the electrical impulses inside his brain.

The initial EEG didn’t reveal anything, nor did a second. To investigate further required a more invasive procedure, but it was the only way of finding the source of the seizure. So, on Jan. 22, 2019, Zach had 22 probes implanted into his brain. But the test still didn’t reveal what doctors needed.

Another 12 probes were inserted into Zach’s brain. At 2 a.m., Zach had a seizure. Steve said the family and doctors were excited to learn the results.

A few minutes later, a technician came in. There had been a malfunction and the results hadn’t registered.

“It was the first time in the whole process that Zach lost hope. He said, ‘I don’t know if I can do it anymore,’” Steve said.

This process had taken days, Zach was tired, hungry and wanted it to be finished. He was ready to tell the doctors to pull out the probes, when the head of the evaluation team entered the room. “We think we’ve detected a pattern,” he said.

After a night of monitoring, by morning doctors believed they had enough information to isolate the part of the brain responsible for Zach’s seizures.

About a month later Zach, Pam and Steve met with Dr. Ben Kennedy, the surgeon who had implanted the probes, to go over the results. There were four options discussed at the meeting, but of the four only one offered a possible cure for Zach’s epilepsy. That option was also the most extreme. Doctors would need to remove a large piece of Zach’s brain, roughly the size of his fist.

“That shocked me of course,” said Steve. “But Zach took it all in stride. He had such great confidence in Dr. Kennedy and decided that the chance of freedom from fear outweighed the risk of failure. It was the most courageous decision I’ve ever seen anyone make.”

Steve recalled the night before the surgery in the hotel room. He leaned over to Zach and said, “If it doesn’t feel right you don’t have to go through with it. Zach’s response was brief. He looked up with a smile and said, “Dad, I got this.”

Despite Zach’s ease, Steve and Pam were nervous. They went out to get something for dinner while Zach stayed behind in the hotel room.

As Steve and Pam made their way back, they enjoyed the tranquility as people sat outside of cafes and surrounding them were beautiful trees. Steve was admiring the scene as they passed through the trees when he felt what he described as a cascading shower of softness.

“It started from the top of my head and went through the bottom of my soul and my feet. I had such a feeling of peace and acceptance. It was going to be alright,” he said.

The next day, Zach went into surgery and just two days later he was released from the hospital. Doctors believed there would be some residual effects that might affect Zach’s speech and personality, due to the part of the brain that was removed. But day after day, Zach began to act and talk like his old self again. Any side effects are hardly noticeable now.

Zach hasn’t had a seizure in more than 146 days. When he hits the six-month seizure-free mark he will be able to apply for a driver’s license, something he was never able to do because of his epilepsy.

Not only was the surgery a success for Zach but for the entire community. Throughout the procedure Steve was sending updates to family-friend and former Mansfield University director of public relations Terry Day, which in turn were being shared on social media. Even though everyone back home was hours away, in a way they were all there with him.

“That’s what this is about. A community that cares. It makes it all better and bearable, knowing there are people out there that care,” Steve said.

“Life is way better than it was before. I haven’t had anything since the operation. I have been hanging out with my friends more and going out places. It is definitely a huge improvement,” Zach said.

Beyond hanging out with friends there has been one big change for Zach. After worrying every day about if and when he was going to have a seizure, Zach is finally free. That fear no longer controls him.

“Fear has no hold on him now. A person who lived his life in constant fear, can you imagine the liberation from that? That has emboldened him,” Steve said.

This past Monday, almost a year to the day when he was forced to withdraw from classes at Mansfield University to undergo the first of three brain surgeries, Zach returned to campus as a full-time student and the beginning of a new life.

“There’s a lesson in Zach’s story for all of us,” said Steve. “Prayers work, faith is rewarded and there are more kind and caring people in this community than anyone could ever imagine.”

It was the most courageous decision I've ever seen anyone make, Steve McCloskey.

Some clouds this evening will give way to mainly clear skies overnight. Low around 10F. Winds light and variable.