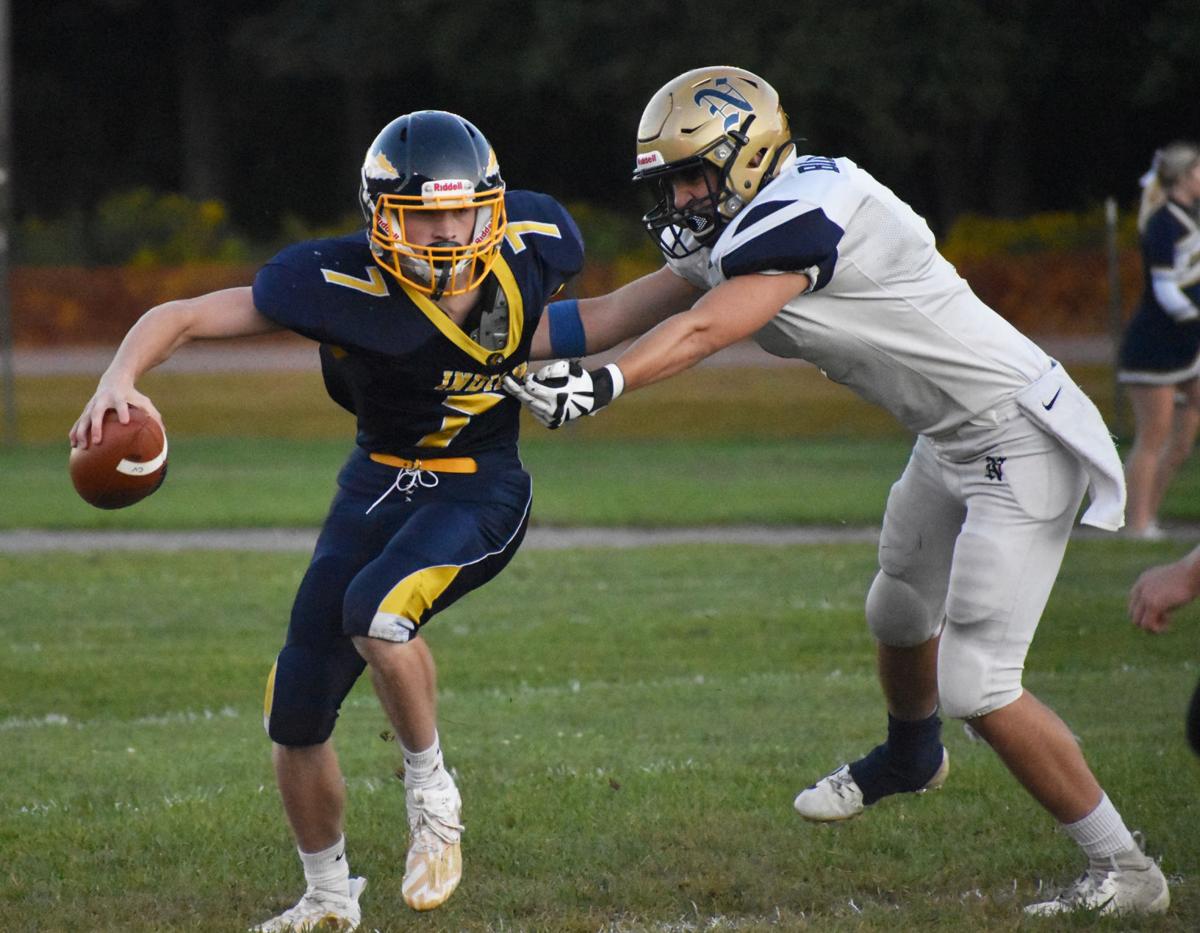 CV’s Tanyon Brown escapes a tackle during their win over Northwest. 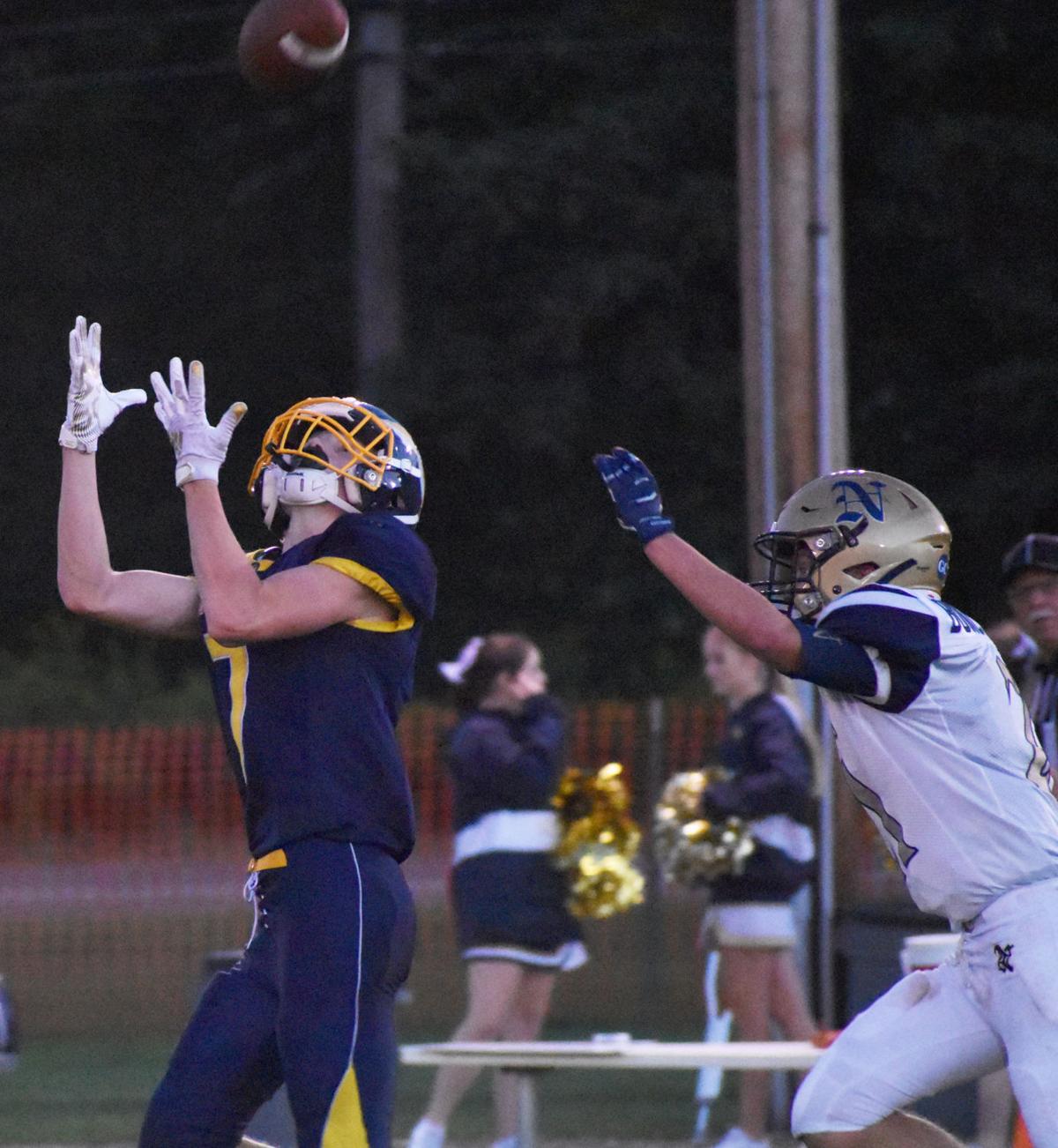 CV’s Tanyon Brown hauls in a touchdown during their win over Northwest. 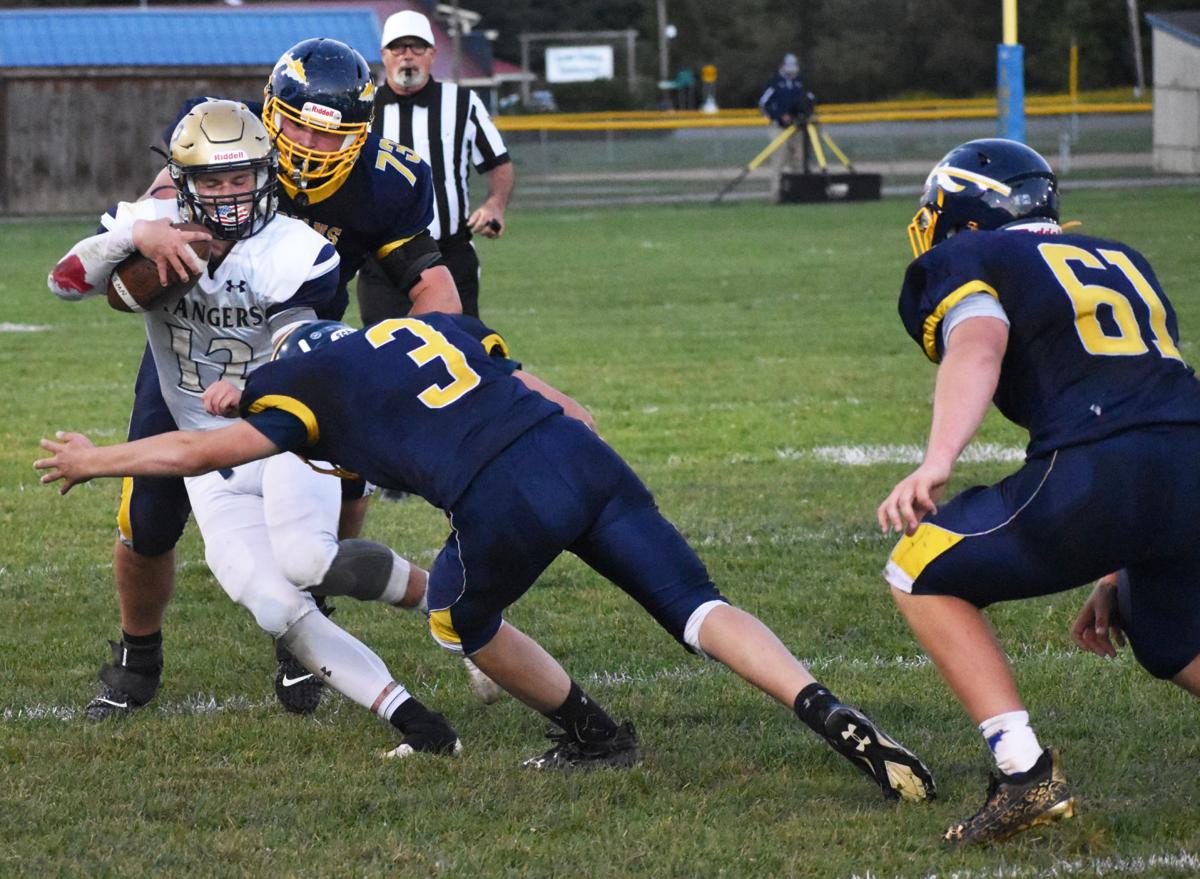 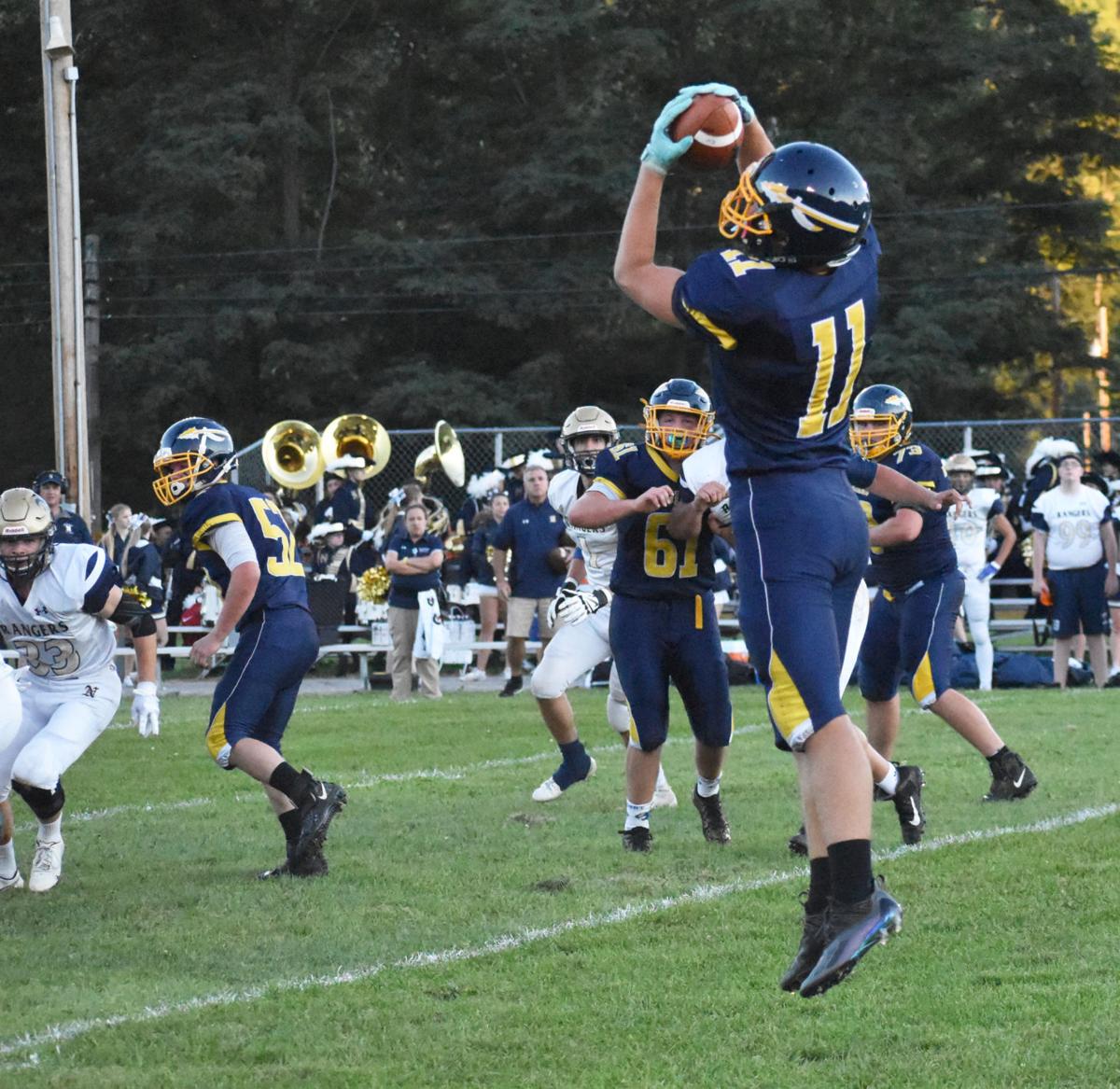 CV’s Fletcher Good jumps for a catch during their win over Northwest on Friday, Sept. 10. 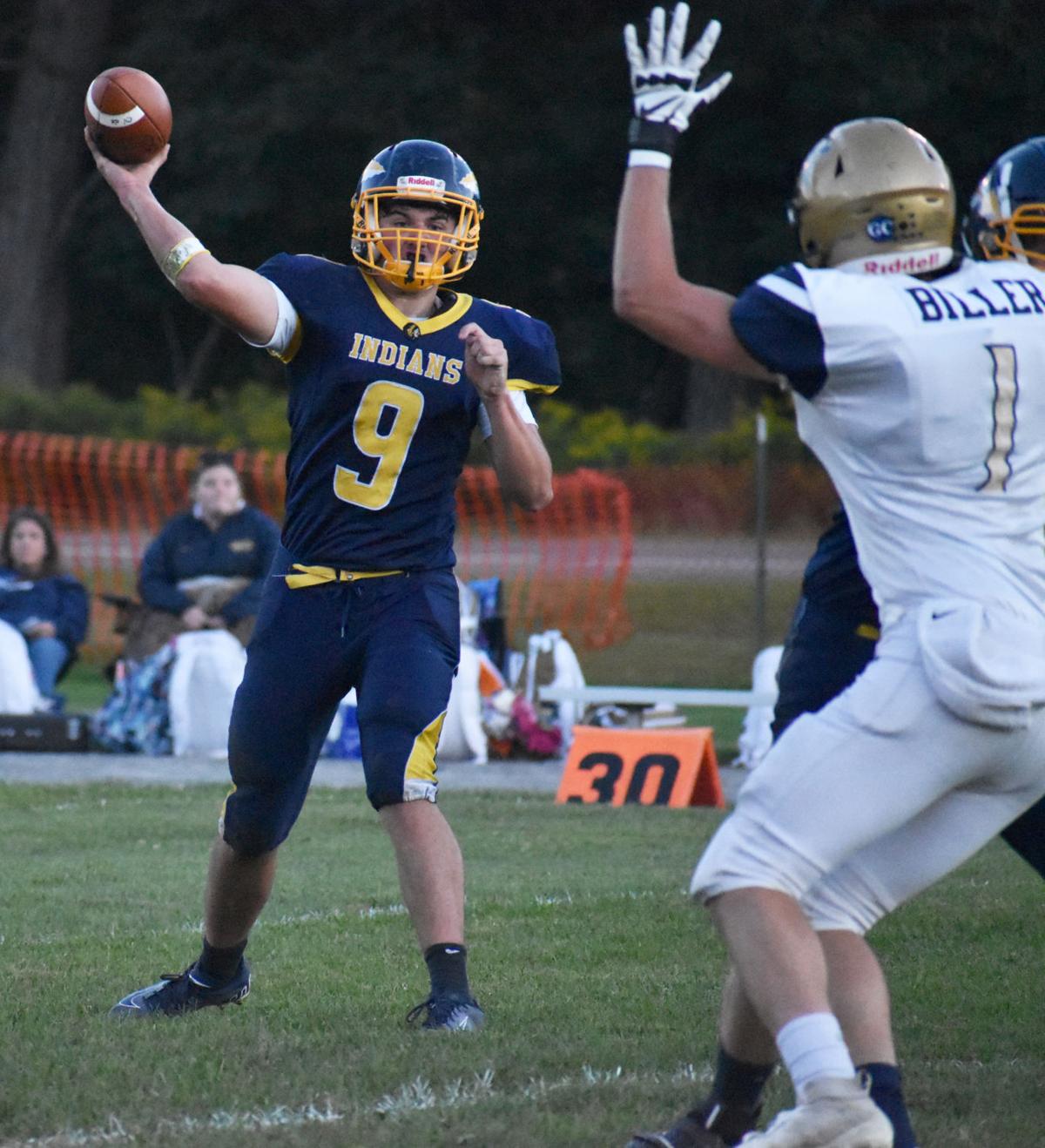 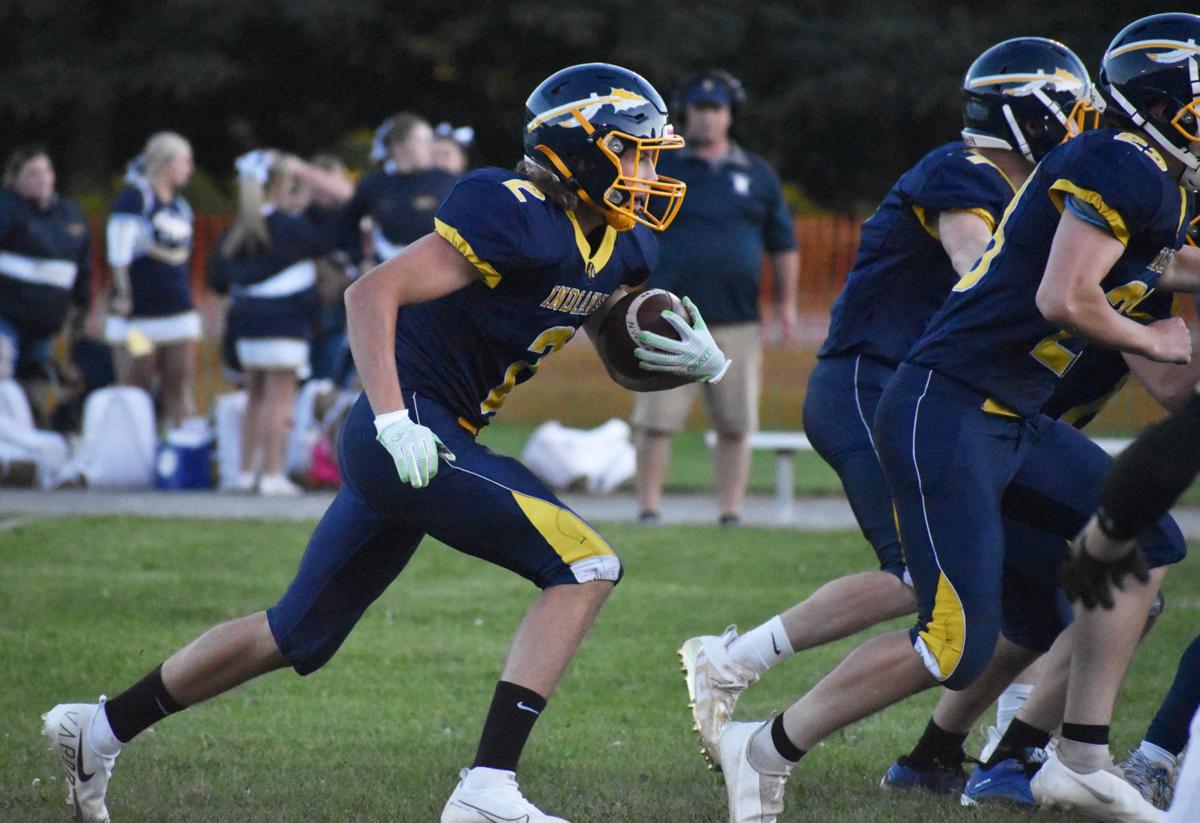 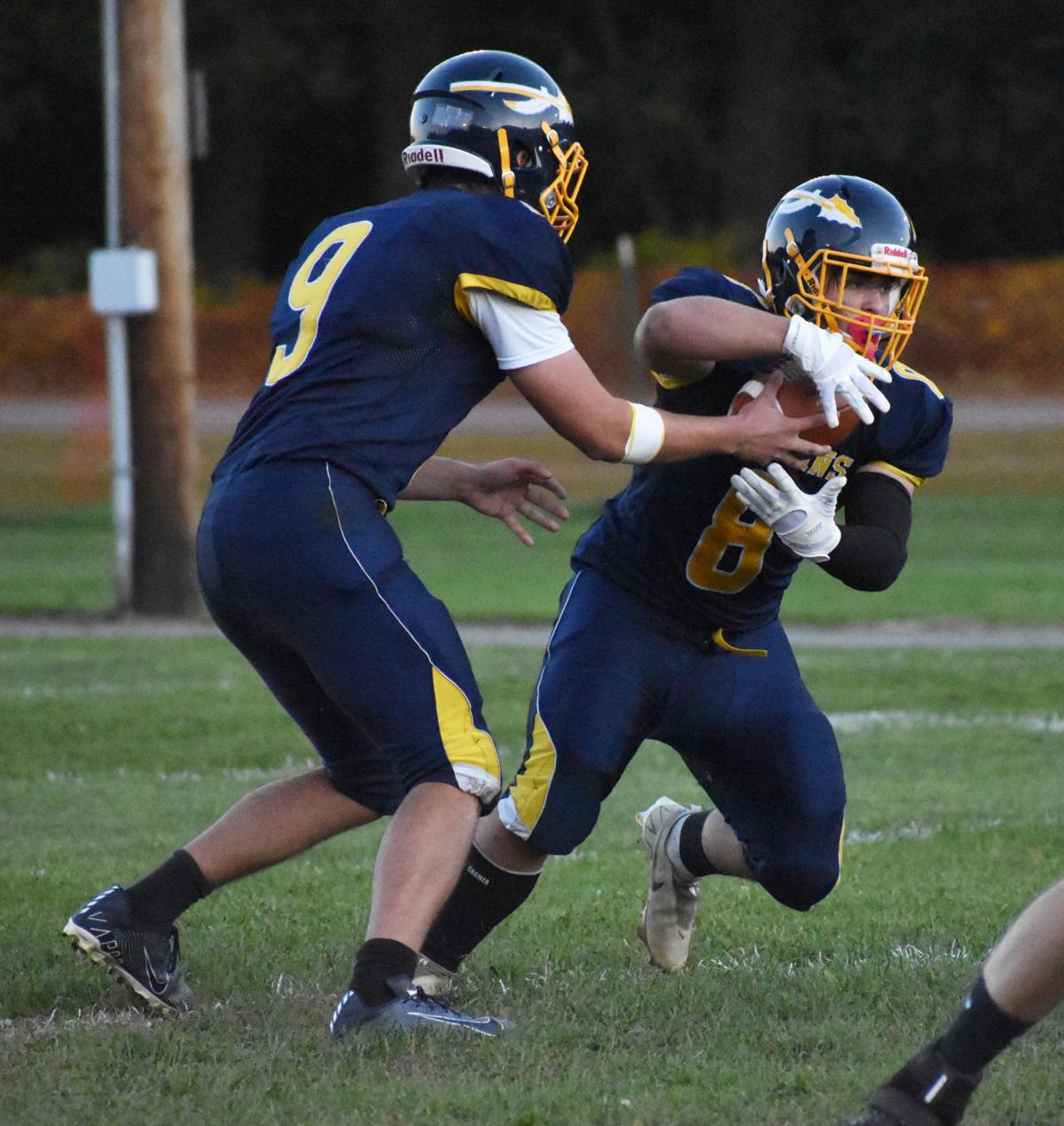 CV’s Tanyon Brown escapes a tackle during their win over Northwest.

CV’s Tanyon Brown hauls in a touchdown during their win over Northwest.

CV’s Fletcher Good jumps for a catch during their win over Northwest on Friday, Sept. 10.

WESTFIELD — In a game where the Cowanesque Valley Indians (2-1) were plagued by offensive penalties, they were still able to scrape out a win against the Northwest Rangers (1-2) after a fourth-quarter touchdown pass from Jacob Schmitt to Tanyon Brown here to push the Indians to a 15-14 victory on Friday, Sept. 10.

“I don’t know what my takeaways are from this one,” CV Football Head Coach Mike Schmitt said. “We capitalized on a few of their mistakes and Tanyon Brown made some great plays.”

Brown made play after play for the Indians, scoring the only two touchdowns for CV in the win. He hauled in two catches for over 120 yards and two touchdowns as well as a game-saving interception as the senior propelled the Indians to their second win in as many weeks.

“I’m just trying to lead my team,” Brown said. “We don’t have many seniors; there’s five or six of us. It’s a bunch of young kids so we don’t have a lot of seniors compared to other teams.”

The Indians would get themselves on the board first in the contest, and on second and 15 Brown would make his first highlight play of the day.

“That kid is going to be a coach someday,” Coach Schmitt said of Brown. “He loves the game and he understands things. He plays hard and he’s happy for his teammates. But he also steps up when his teammates need him and I’m proud of that.”

Quarterback Schmitt saw single-coverage on the outside against his number one receiver and decided to uncork a bomb that found the outstretched arms of Brown in stride.

He would shake a defender to stroll into the end zone from over 70 yards out, after the kick the Indians found themselves with a 7-0 lead at the 8:31 mark of the second frame.

“It wasn’t my call, the coach just drew it up,” Brown said of the long touchdown. “The line gave us enough time to throw the deep ball because the defense was playing with everyone in the box.”

The Northwest team wouldn’t fold after falling behind, and on their next drive, they would use a 15-play, 60-yard drive that took up almost the entirety of the quarter and was capped off by a touchdown pass from quarterback Carter Hontz to receiver Landon Hufford to close the gap to 7-6 with only 33 seconds left in the half.

The Indians would try and punch one in late, but an interception would end the half with CV only leading by one point.

In the second half, Northwest would strike quickly for their first lead of the evening, and quarterback Hontz found receiver Andrew Bonczewski for a 50-yard bomb, after a successful two-point conversion the Rangers would find themselves with a slim 14-7 lead, but it would be the last time they would score on the night with 8:43 left in the third quarter.

CV would threaten in the third quarter, and after a big fake-punt pass that was completed for nearly 40-yards, it looked like the Indians might take the lead, but a fumble on the back-end of the play ended their chance.

But the defense would respond, and after a few penalties and some defensive stops, Northwest would be pinned deep in their territory and forced to punt.

The Rangers would mishandle the snap, and the kicker would fall on the ball in the endzone for the Indians to get the safety and narrow the advantage to just 14-9.

After both teams struggled to sustain a drive in the remainder of the third quarter, the CV defense would step up big, allowing just 17 yards in the final quarter.

“I feel like as a team, this might be our best defensive performance in a while,” Brown said. “It was the whole secondary, we gave up a few passes but the linebackers and D-lineman held their own, that’s what got us the win.”

The defensive play allowed for CV to take another long shot to the endzone, with Brown hauling in his second big touchdown of the day, this time from 45-yards out, after the extra point was no good the score was brought to its final mark of 15-14.

The Rangers were able to threaten late in the game in Indians territory, but Brown was able to come up with another pivotal play where he grabbed an interception from inches off the grass with only a few minutes left to seal the game and push the Indians to 2-1.

“It feels awesome,” Brown said of matching their season win total from a season ago just three games into the year. “But our goal is still to win one game at a time, and we want to win each week.”

Despite the win, the Indians were penalized early and often on simple miscues such as delay of games and false starts due to motioning receivers and running backs.

With a big matchup against a team known to not make a lot of mistakes, there is still some uneasiness created from the play of the Indians in their second win of the year.

“It’s tough right now, I don’t know how I feel,” Coach Schmitt said of their performance. “I mean, we have two wins, but we have so much work to do. I don’t know how many thirds and longs we have gave up and things of that nature that winning teams can’t do, so we play a great team this week and I’m just concerned about watching film and fixing what we see and trying to get better next week.”

The Indians will take their win-streak into their most daunting contest of the 2021 season, as they now face the undefeated, second-ranked Class A team in the state of Pennsylvania against Muncy on Friday, Sept. 17 in Westfield at 7 p.m.