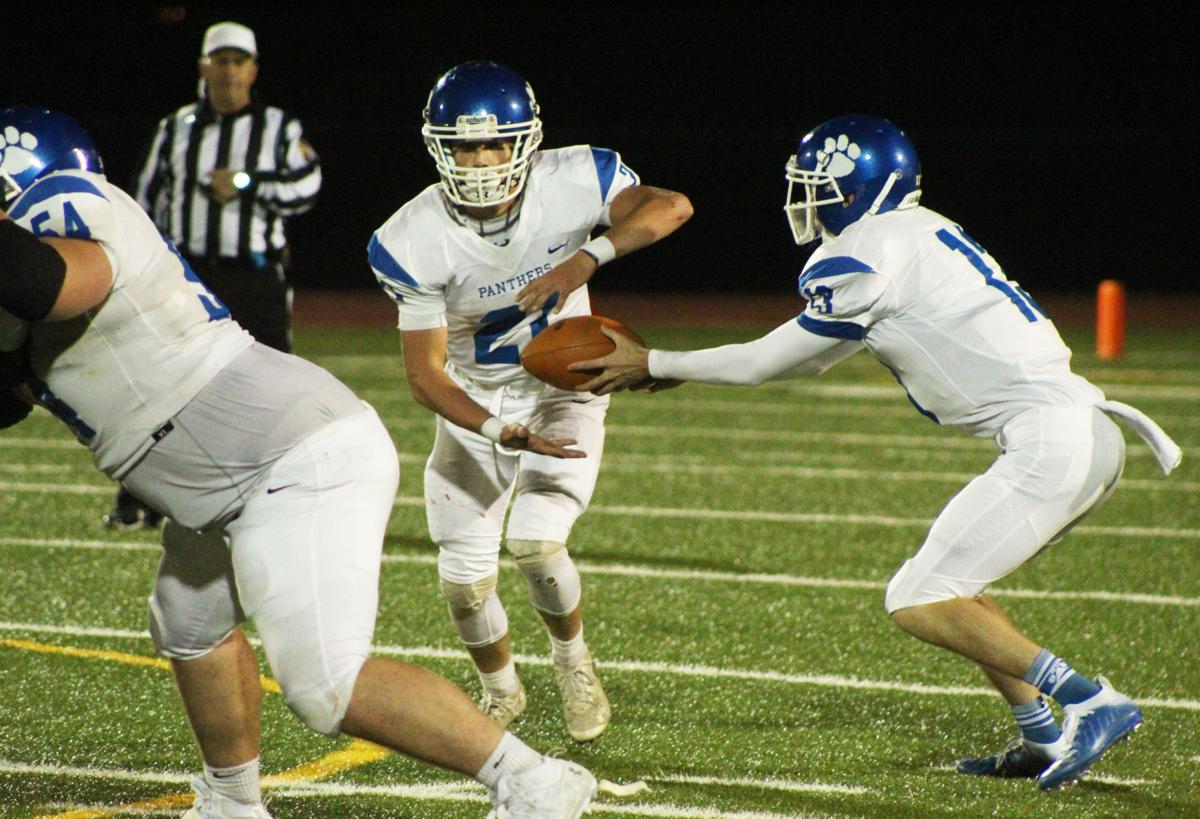 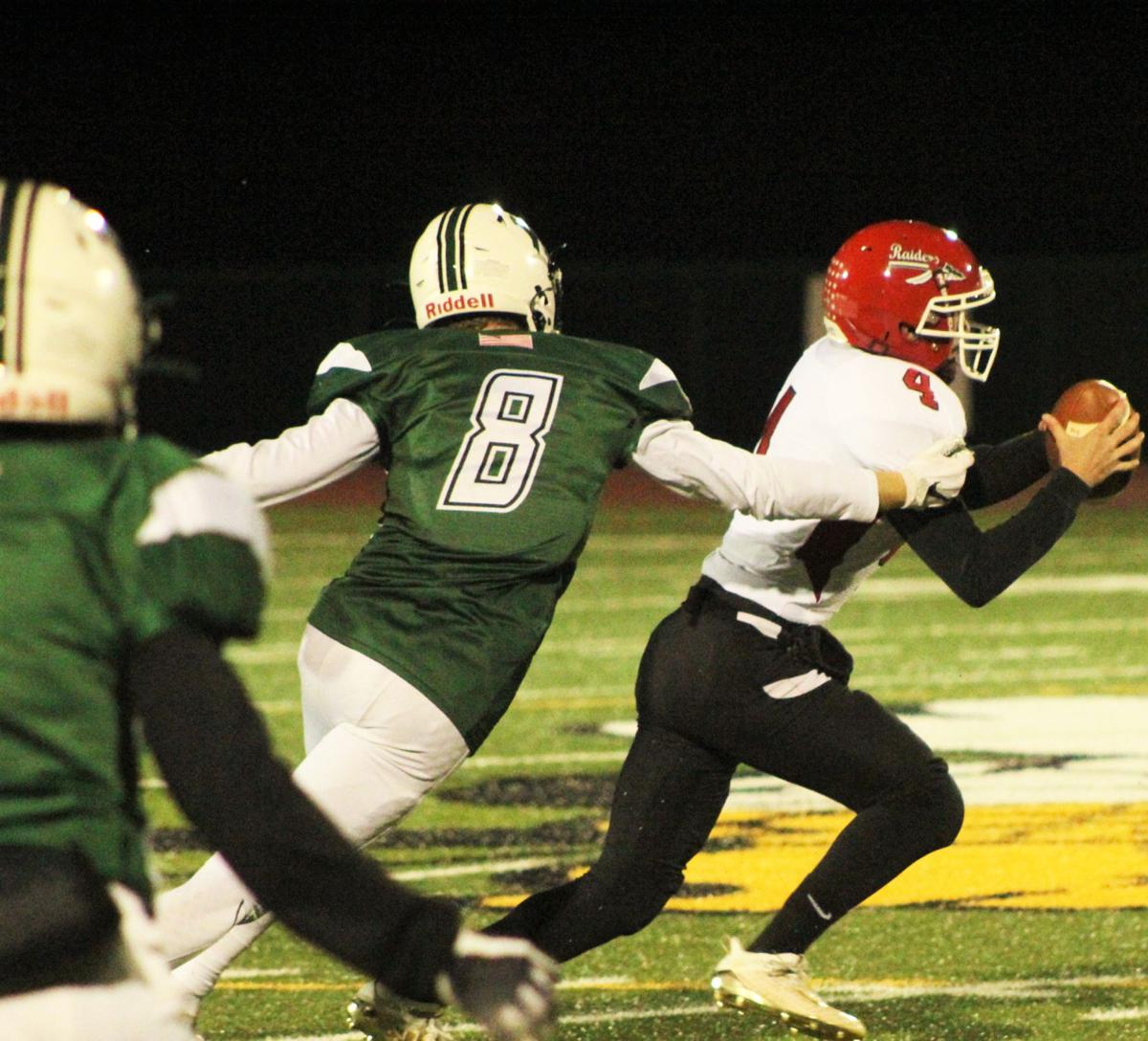 Zach Singer gets to the quarterback on Friday, Oct. 30 in their win over 42-6 Montgomery. 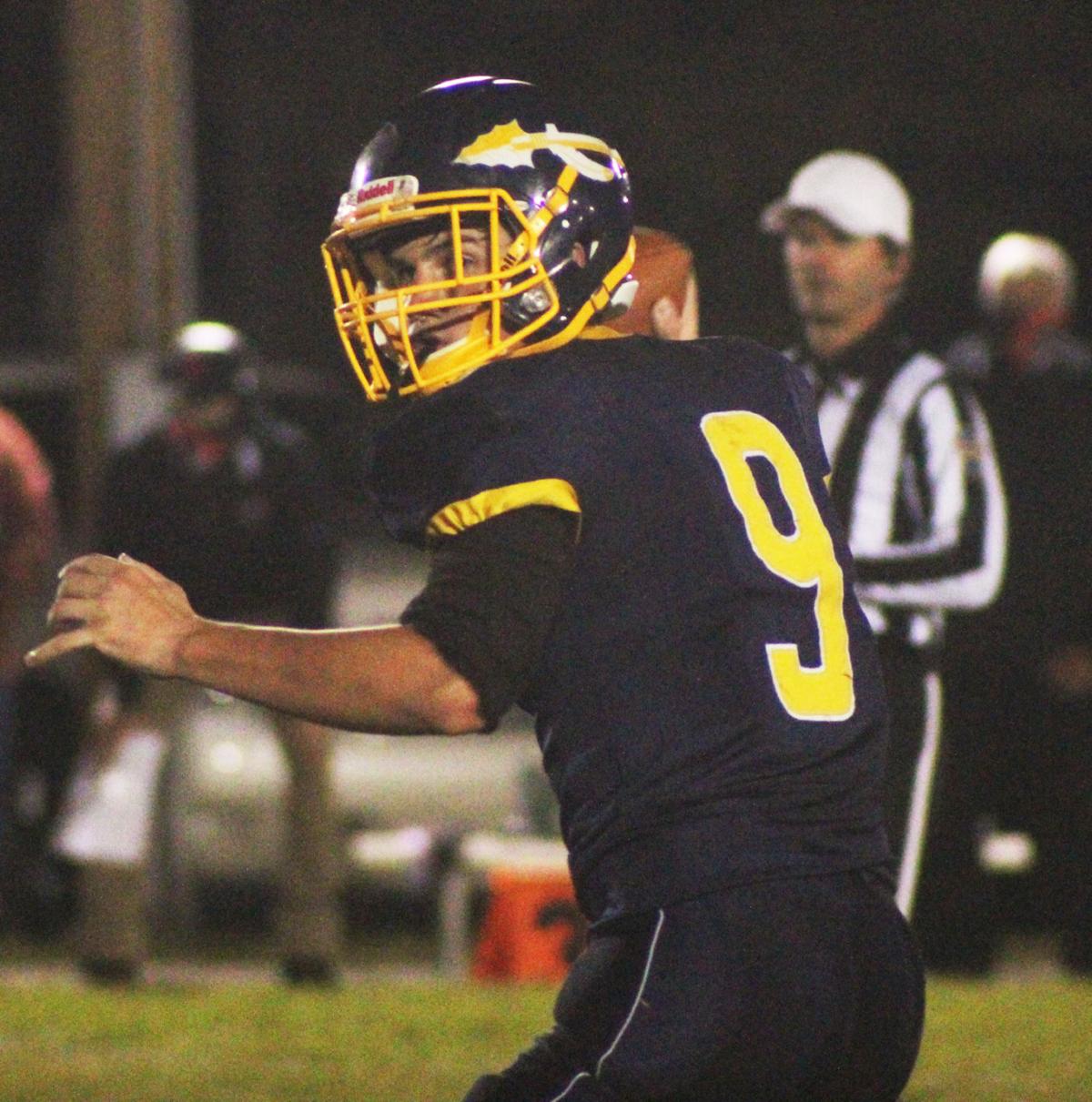 Jacob Schmitt scored an incredible seven touchdowns on Friday, Oct. 23 as he lead his team to 66-13 victory over CMVT.

Zach Singer gets to the quarterback on Friday, Oct. 30 in their win over 42-6 Montgomery.

Jacob Schmitt scored an incredible seven touchdowns on Friday, Oct. 23 as he lead his team to 66-13 victory over CMVT.

Over the next four weeks. the Wellsboro/Mansfield Gazette and Free Press-Courier will be looking at the Top Ten Games of the 2020 Fall Sports Season.

This week we will look at the number 10 through eight games from this past season.

The matchup between the Wellsboro Hornets and the North Penn-Mansfield Panthers football teams included a little bit of everything that makes a game exciting.

Two rival teams, a second half comeback and the Morton Jones Trophy were all were part of this heated season-opener for the Panthers and home-opener for the Hornets that took place on Friday Sept. 18.

Seventeen unanswered points from the North Penn-Mansfield Panther football team led them to a come-from-behind victory over the Wellsboro Hornets of 17-14.

Wellsboro ran up the score early, with a two touchdowns in the first quarter and a half of play, that gave them an early lead of 14-0.

With a touchdown pass from Isaac Keane to Conner Adams in the first quarter and an interception return for a touchdown from Will Kibler halfway through the second quarter, it looked like Wellsboro might just run away with a win.

But the Panthers didn’t give up, and were able to shake the rust off after only having a few weeks of organized practice prior to the contest.

“I mean that was the problem,” NP-Mansfield Head Coach Tom Dickinson said. “We’ve had these kids for three weeks. That’s it. No summer, no scrimmage and no game one. So you know we made mistakes that you would make in a scrimmage. But we were lucky enough to hang with it, and Bryan (Bogaczyk) had a big pick. Kevin (Alexander) hit the field goal and you know, we just got to take it, we got the win but we got a lot of work to do.”

On the very next drive Colton Litzelman found a wide-open Brandon Thompson down the seam and reeled off their biggest play of the night up to this point coming in the form of a 44-yard reception.

Moments later, senior Kohen Lehman rumbled in from 21-yards out for a touchdown and closed the gap to 14-7.

The Panthers defense continued to tighten, and helped keep the score at 14-7 heading into the second half.

Late in the third quarter, NP-Mansfield’s Bryan Bogaczyk jumped a screen pass and finally tied the game up. on a 10-yard interception touchdown return.

With the score knotted, the bruising run game of the Panthers started to pay dividends, as they kept pounding the ball down the teeth of the Wellsboro defense. The offense moved slowly and methodically down the field until they put one of the top kickers in the NTL, Kevin Alexander, in field goal position with a shot to take their first lead of the game.

Alexander knocked down the 32-yard attempt with ease and scored the last points for either team on the night and to complete the epic comeback for the Panthers.

Hard to leave this game off any Top 10 list, the Cowanesque Valley Indians put together a monster performance where they scored a whopping 66 points on their way to a final count of 66-13 in their season-finale over the Columbia Mountousville Vo-Tech Rams.

“Every season we look to get better with personnel and no position is ever written in stone, so we will see how the off season progresses and how the summer goes,” Head Coach Mike Schmitt said on quarterback competition moving forward. “I get excited to watch our team improve and all the players work together. Tucker St. Peter was having a good year before he was hurt so we are just looking to get better and improve as a team.”

Where the Indians have started slow in most of their games in 2020, they were a different team when they took on the Rams.

They scored early and often in a game that was never in question throughout the day.

“Schmitt completed an impressive 10 of 16 throws in the afternoon, with six going for touchdowns.

Junior running back Elliot Good posted his best all-around game as he caught five balls for 124 yards and three touchdowns while also carrying the ball 11 times for 91 yards and averaging 8.3 yards per carry during the big win.

Also recording touchdown passes were Tanyon Brown, who hauled in two catches for 25 yards as well and also took an interception back for a touchdown to put an exclamation point on an impressive junior season.

Other players hauling in touchdown passes were senior Tre Slawson and freshman Jake Dimon who both caught two passes on the day.

The Indians put together the top scoring performance for any area football team in what will be a game to remember for the entire team.

“I believe next season has potential to be a great year for CV but what happens over the next eight months will determine that. We must have a great off season for the process to continue to move in an upward trajectory.”

In what could be described as a down year for the Wellsboro Hornets football team, they were able to pull off a statement win in their season finale against Montgomery where they showcased their young talent in a big win over the Red Raiders of 42-6.

The Wellsboro defense was extremely impressive during their final outing of 2020 and smothered the Red Raiders offense for most of the game.

On Wellsboro’s first drive the Hornets were set up by a long catch and run from Isaac Keane to Will Kibler that pushed the ball down to the one-yard line.

On the very next play Keane punched it in on a quarterback sneak and just like that, the Hornets found themselves up 7-0 only a few minutes into the first quarter.

The Hornets defense refused to break later in the quarter, and were able to hold off the Red Raiders with a big stop deep in their own territory.

In the closing minute of the second quarter, running back Darryn Callahan busted free for a 29-yard touchdown and the score was 14-0 with the Hornets in complete control.

Halfway through the second, Zach Singer hauled in a four-yard touchdown pass that pushed the score to 21-0, as the Hornets started to take complete control.

Kibler notched both scores with one coming on a touchdown reception from Conner Adams where he tiptoed to the corner of the endzone.

His second came on a punt return where he outran the entirety of the Montgomery defense with ease and had the Hornets up 35-0 heading into halftime with no signs of slowing down.

The second half saw Montgomery finally reach paydirt with Kaide Drick punching in a three-yard touchdown .

Callahan finished the game off with a 62-yard catch-and-run from Adams that ended the scoring at 42-6 with Wellsboro picking up their third win of the year.

Wellsboro took a different approach in their season-finale than in other games this season with both Adams and Keane nearly splitting snaps from under center.

Both played well with Adams going 3-3 passing with 86 yards and two touchdowns. He also ran the ball for 33 yards.

Callahan also put together another impressive showing with 174 total yards on only 11 touches with two touchdowns.

Kibler put on a show as well with an electric performance with four catches for 86 yards and a touchdown to go along with a punt return for a touchdown.

After allowing 80 points in their last two contests they played on of their best defensive games of the season.

Though the contest wasn’t c;lose, the Hornets were able to come up with a win that will likely be used to build upon when they return their young roster in 2021.