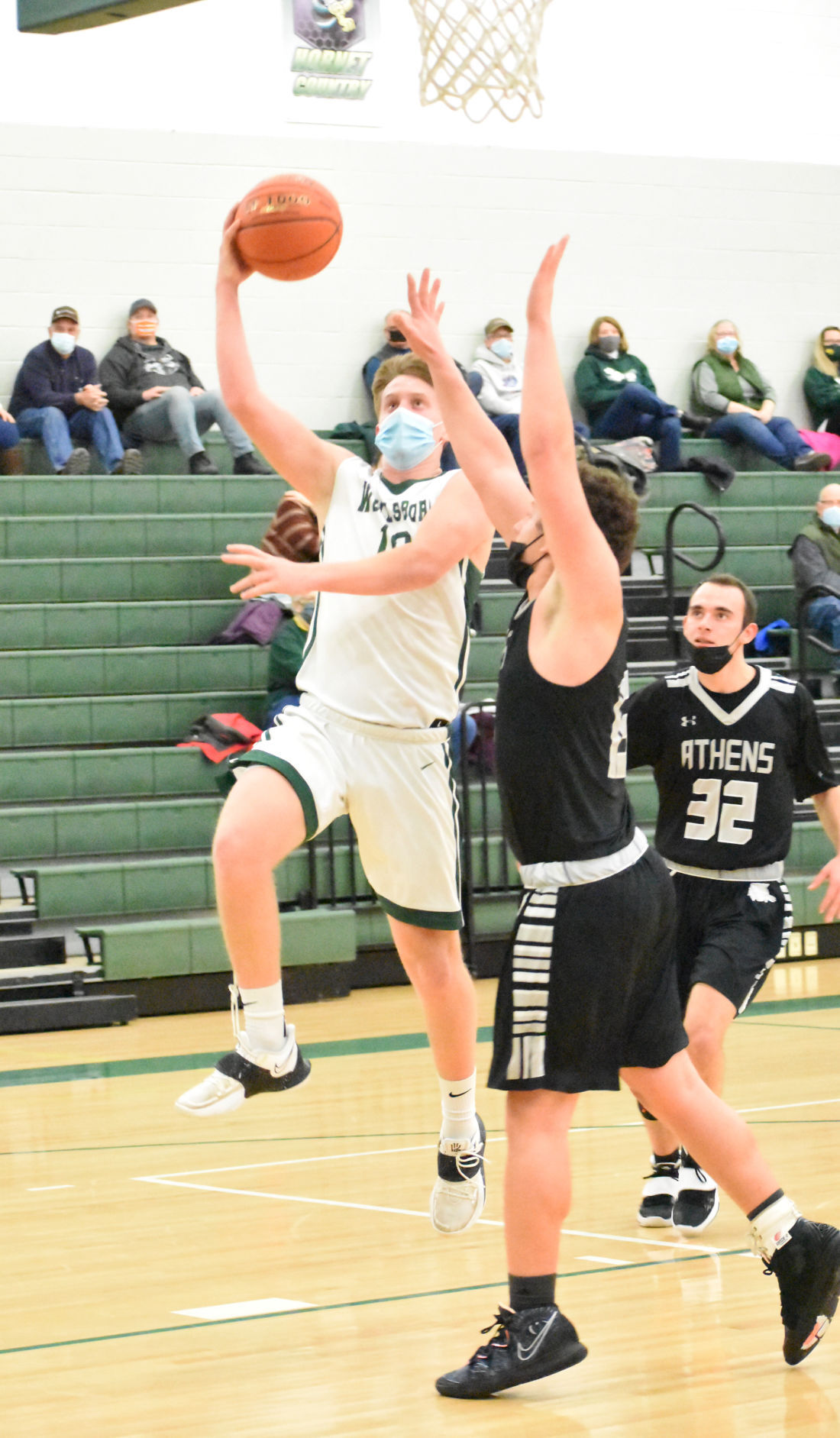 Isaac Keane goes up for two of his 12 points during the Hornets win over Athens on Friday, Feb. 12. 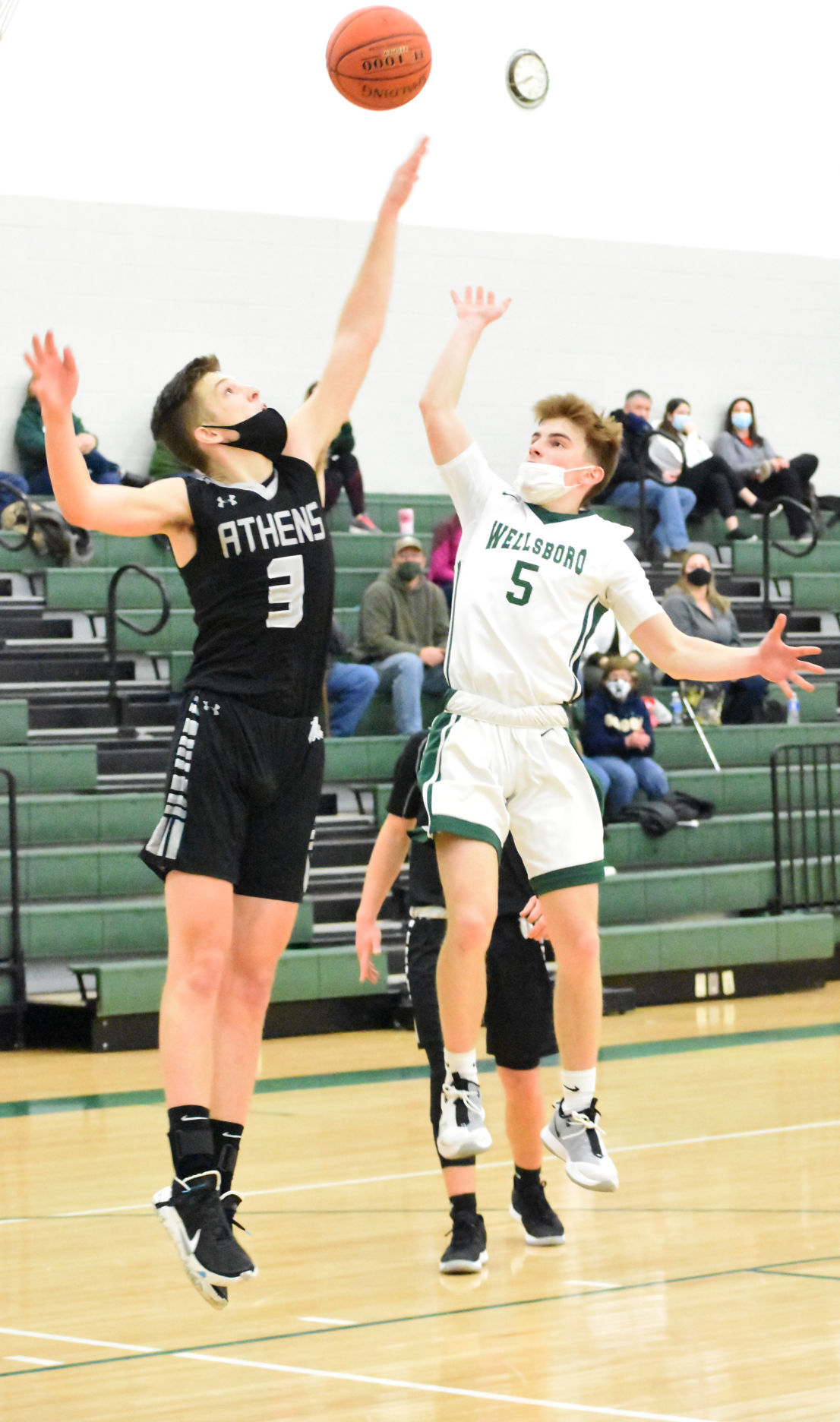 Conner Adams floats a shot over J.J. Babcock during the Hornets win over Athens on Friday, Feb. 12.

Isaac Keane goes up for two of his 12 points during the Hornets win over Athens on Friday, Feb. 12.

Conner Adams floats a shot over J.J. Babcock during the Hornets win over Athens on Friday, Feb. 12.

WELLSBORO — The Wellsboro Hornets (9-2) had a busy week of basketball as they hosted two games and traveled for another two games as the topped North Penn-Mansfield (6-5), Athens (8-7) and Williamson (1-12).

The Hornets also traveled to Northeast Bradford on Saturday, Feb. 13 where they fell to the Panthers 62-60 in an overtime thriller for their first loss in over three weeks.

In their first game of the week, the Hornets were able to reclaim the Peg Berguson Memorial Trophy behind a 24-point career-high performance from Conner Adams as Wellsboro captured a 68-56 win over their rival Tigers.

“Mansfield gave us some looks and Conner knocked them down,” Wellsboro Head Coach Steve Adams said. “I got to give him credit. He showed up to play in this game and tonight he had a tough assignment to try and guard in Alex Stein who is a great guard. Anytime Wellsboro and Mansfield play it’s going to be a battle, Kipper (Burleigh) does a good job with his guys.”

Adams scored from all over the floor, knocked down a game-high three triples and was clutch from the free throw line hitting 5-6 with most coming down the stretch in the fourth quarter.

“It felt great,” Adams said on setting his new career high. “It’s always great to beat Mansfield because those are our rivals.”

Another strong defensive effort from the entire team helped them grab their eighth-straight win and Darryn Callahan played stellar defense on freshman Karson Dominick, who was averaging just under 18 points-per-game, and held him to only four points.

“That’s Darryn Callahan,” Coach Adams said. “He was outstanding defending tonight and has been a great leader on this team and does it all, and he kind of takes pride in that. ‘”

Callahan also added 12 points and 10 rebounds on the night.

“Mansfield gave us some looks and Conner knocked them down,” Coach Adams said. “I got to give him credit. He showed up to play in this game and tonight he had a tough assignment to try and guard in Alex Stein who is a great guard. Anytime Wellsboro and Mansfield play it’s going to be a battle, Kipper (Burleigh) does a good job with his guys.”

Wellsboro also got a big night from center Liam Manning who recorded 14 points and 10 boards and secured his seventh double-double of the year (most in the Northern Tier League).

Adams also added two steals and six rebounds on the night in one of his best performances,

The Tigers were led by Alex Stein who notched 21 points, five assists and seven rebounds for Mansfield, senior Jacob Evans who scored 14 in the effort and Brody Burleigh who scored nine points and secured a game-high 12 rebounds.

In their next home contest against Athens, the Hornets continued to roll as they avenged a season-opening loss to the Wildcats in dominating fashion by a score of 65-47.

Wellsboro took control early and never looked back as they never trailed during the win.

“Our offensive execution and decision making has been very good all week,” Coach Adams said. “We have weapons, and these guys look for one another and they’re unselfish. We want defense to be our identity and we’re playing good on both sides of the ball.”

The defense came up big in the win and only allowed Athens to score 47 points, their third lowest total of the year.

Manning continued to dominate inside and scored 22 points while nabbing 12 rebounds in his eighth double-double of the game, but was stalwart on defense as well holding another top-tier NTL scorer, J.J. Babcock, to only five points in the effort.

The Hornets had an extremely balanced effort in the win, as four players scored in double-figures.

Adams knocked down two three-pointers on his way to 13 points while Isaac Keane had a near triple-double scoring 12 points, dishing out 10 assists and grabbing eight rebounds in the win.

In their final action of the week the Hornets came back to earth after a nine-game run that dates back to Jan. 15 as they lost in an overtime thriller to the NEB Panthers falling 62-60 at the hands of a Sam Abell three-pointer off the blackboard at the buzzer.

Despite the loss, sophomore sharpshooter Peyton McClure had a career-night, tying the Wellsboro single-game record for threes in a game with seven on his way to a game-high 25 points.

The Hornets held a lead going into the fourth quarter, but a big defensive effort for the Panthers helped them to outscore the Hornets 14-7 and force extra time.

In overtime, Wellsboro held the lead going into the last possession, but Abell was able to knock down a triple off the glass as time expired to hand the Hornets their first loss in a month.

NEB was led by a strong effort from their big time scoring tandem Nick Beers and Lucas Crown who scored 24 and 16 points respectively.

Abell notched 12 points on four three-pointers and the game winner for the Panthers.

Callahan added nine points, six rebounds and one steal and Adams had two points in the loss.

They finished their week off with yet another victory over Williamson by a score of 76-40 where Manning scored a career-high of 27 points in the win.

Callahan also chipped in 16 points and eight rebounds and McClure continued his hot shooting streak and scored 11 points while knocking down a game-high three triples.

McClure has now hit 12 threes in his last three games after suffering a minor shooting slump earlier in the week.

Wellsboro visited Troy on Wednesday, Feb. 17 for their biggest test of the 2021 season as they took on the Trojans for possession of first place in the NTL Large School Division race.

To find out who came out on top, pick up next week’s edition of the Wellsboro/Mansfield Gazette and Free Press-Courier.