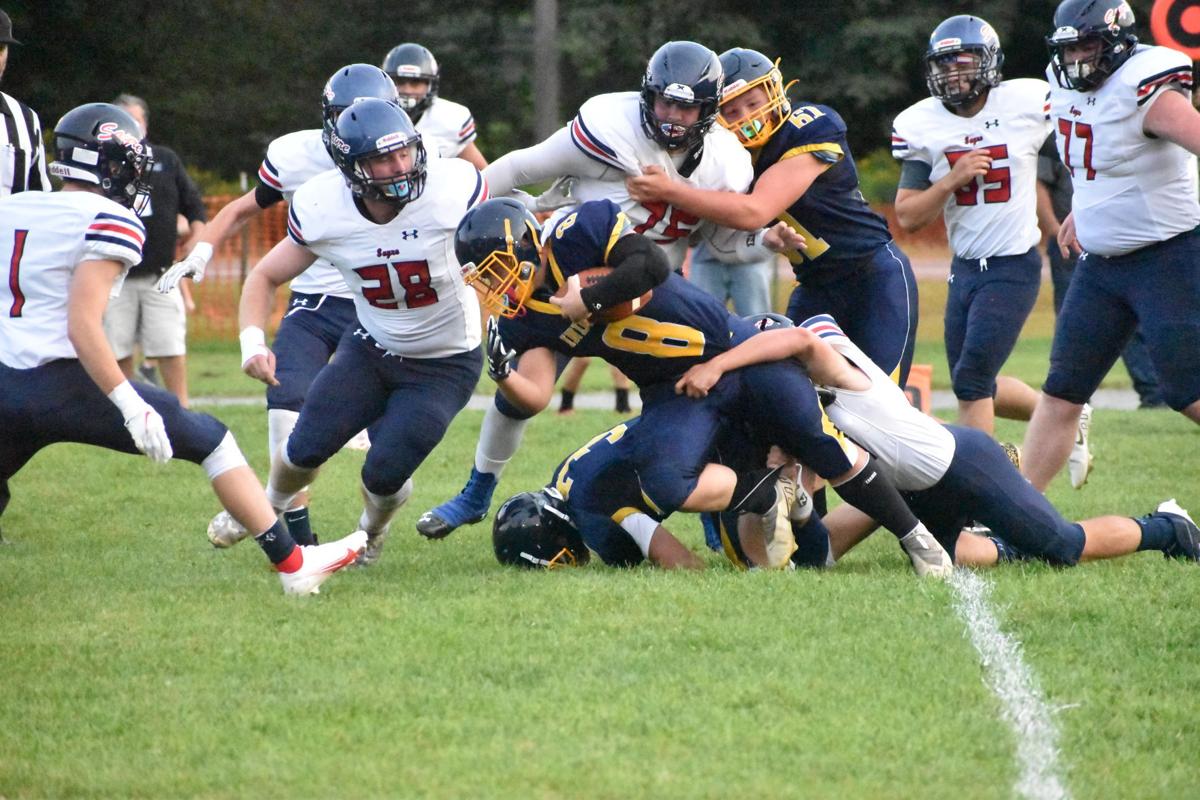 CV freshman Timmy Freeman plows through the teeth of the Sayre defense during their 26-19 win on Saturday, Sept. 4. 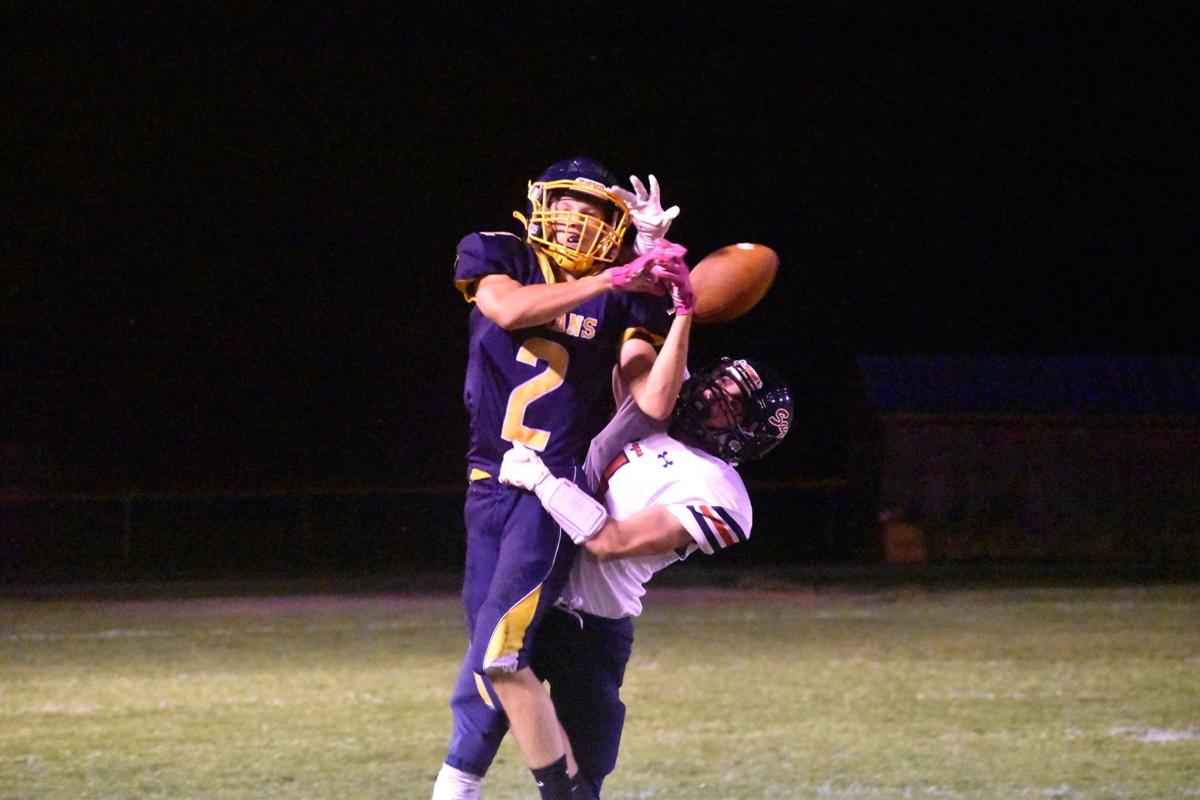 CV’s Tucker St. Peter breaks up a pass in the fourth quarter during the Indians 26-19 win over Sayre on Saturday, Sept. 4. 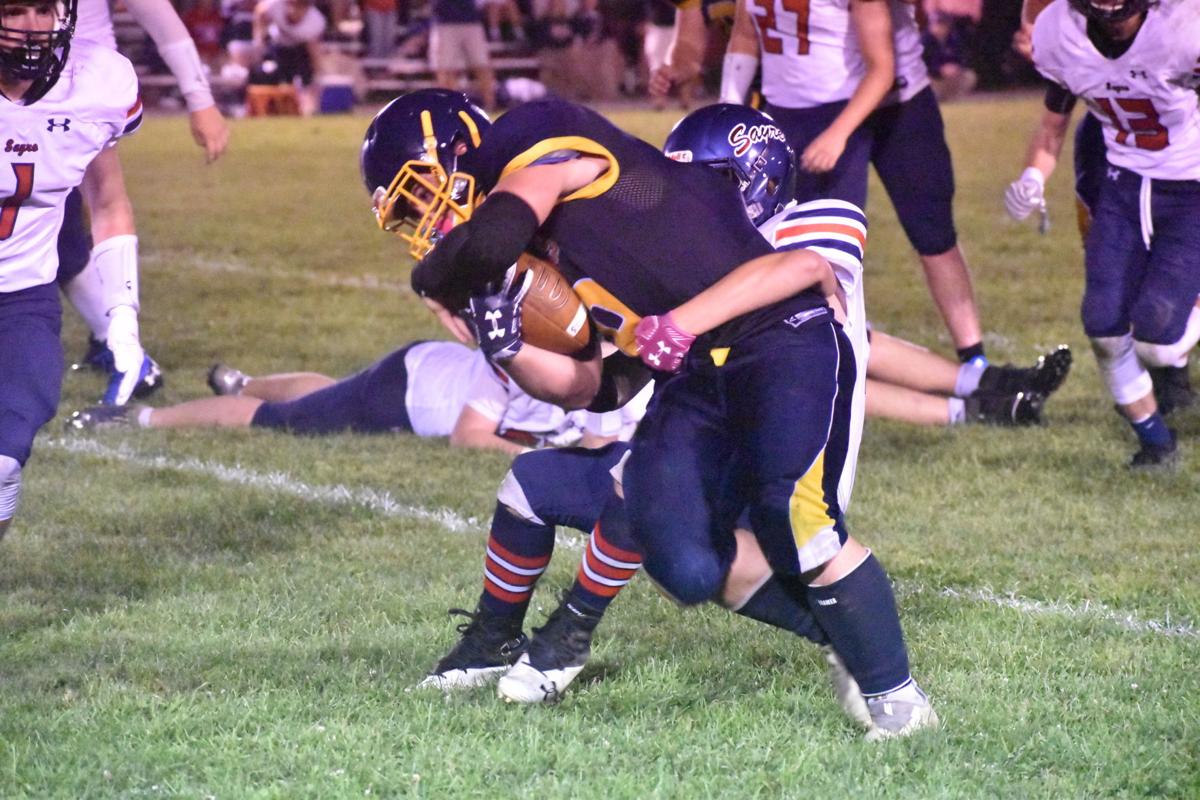 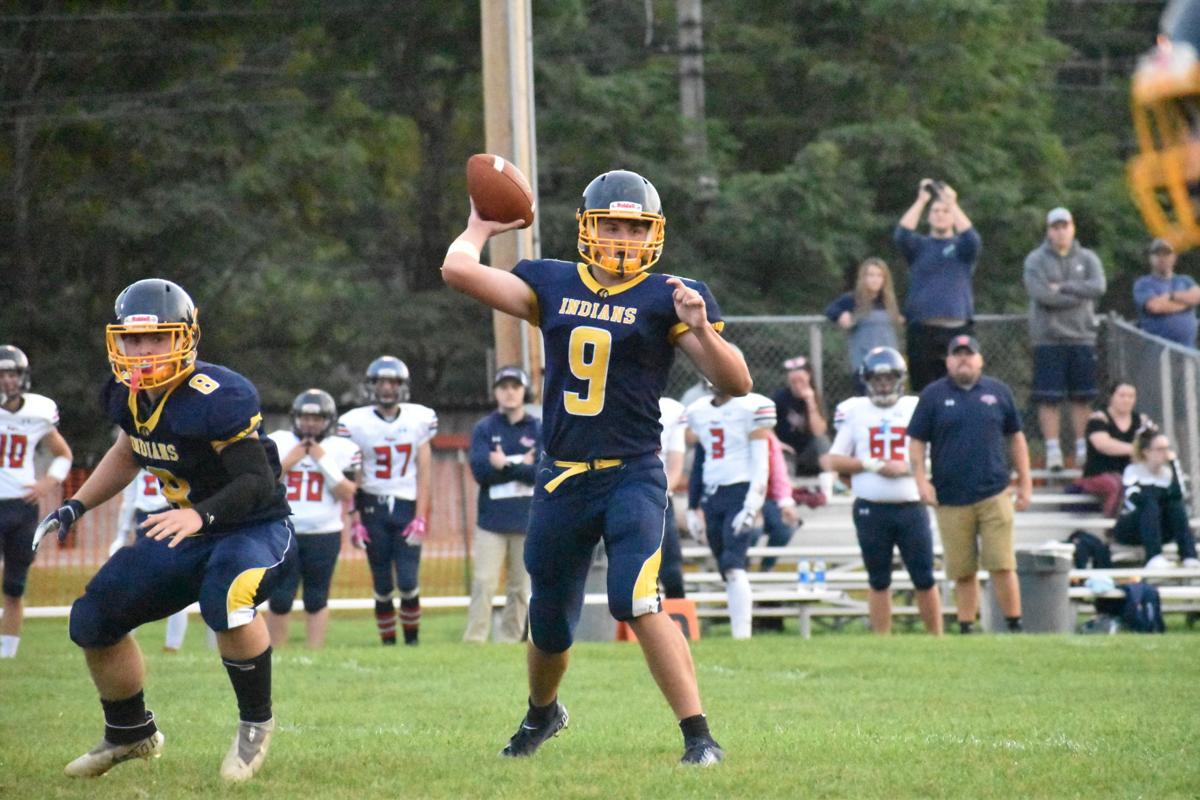 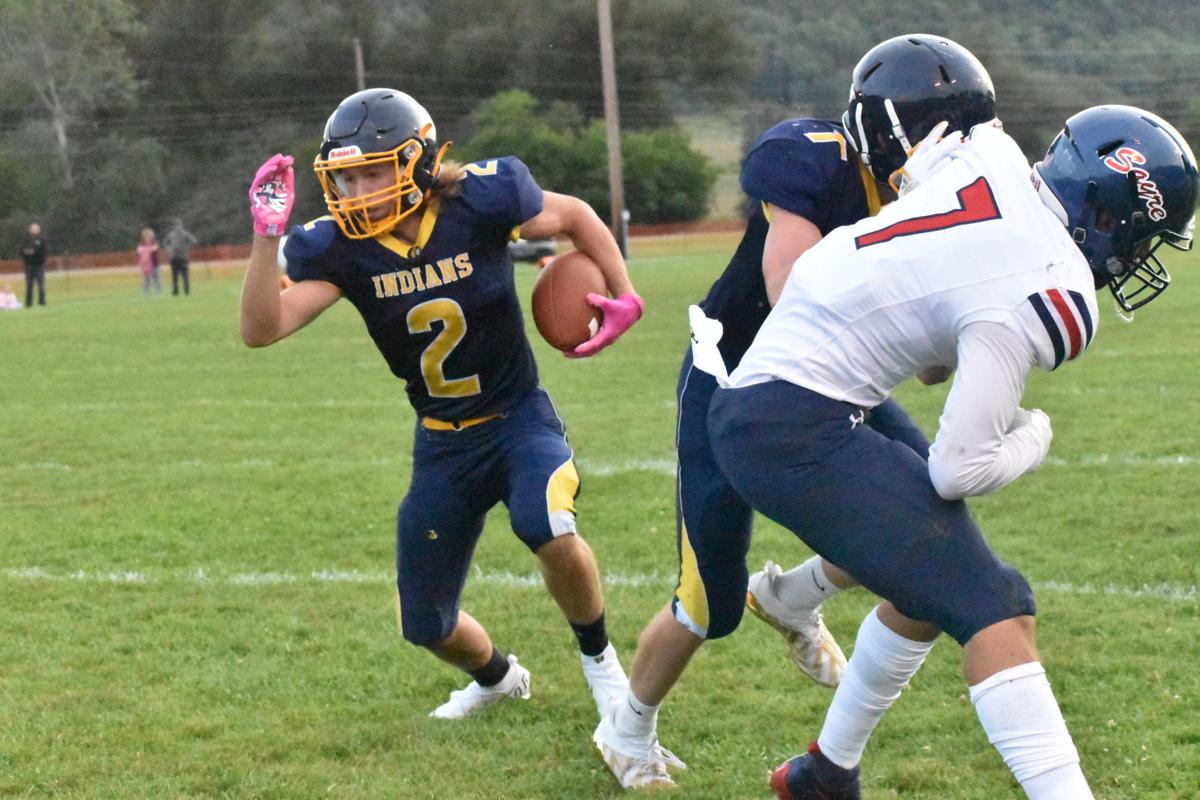 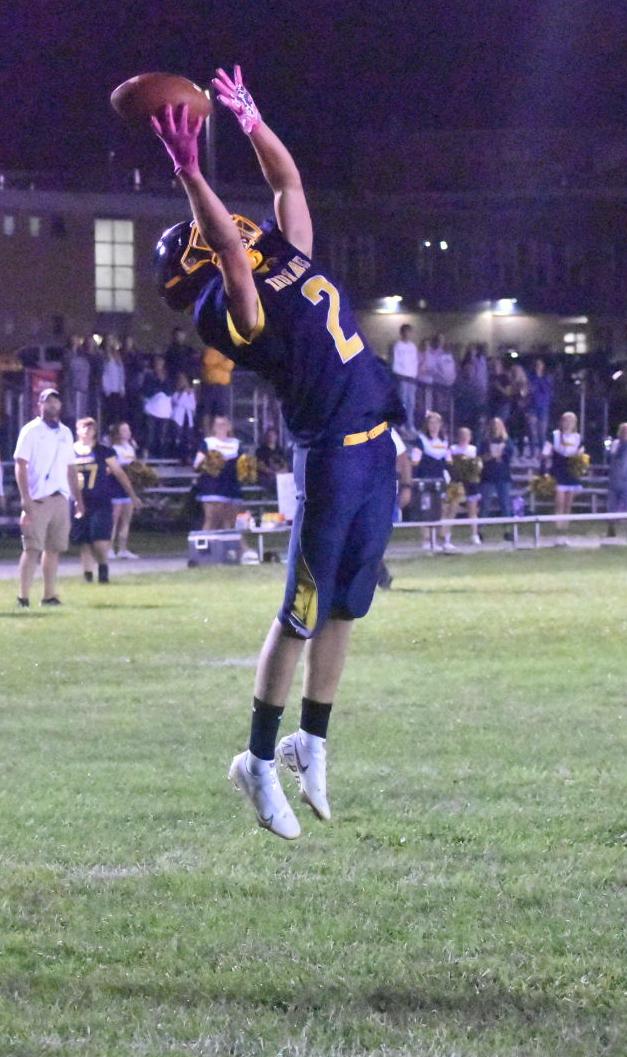 The CV football team celebrates a fourth down stop in the waning moments of the fourth quarter as they sealed their victory over the Sayre Redskins on Saturday, Sept. 4. 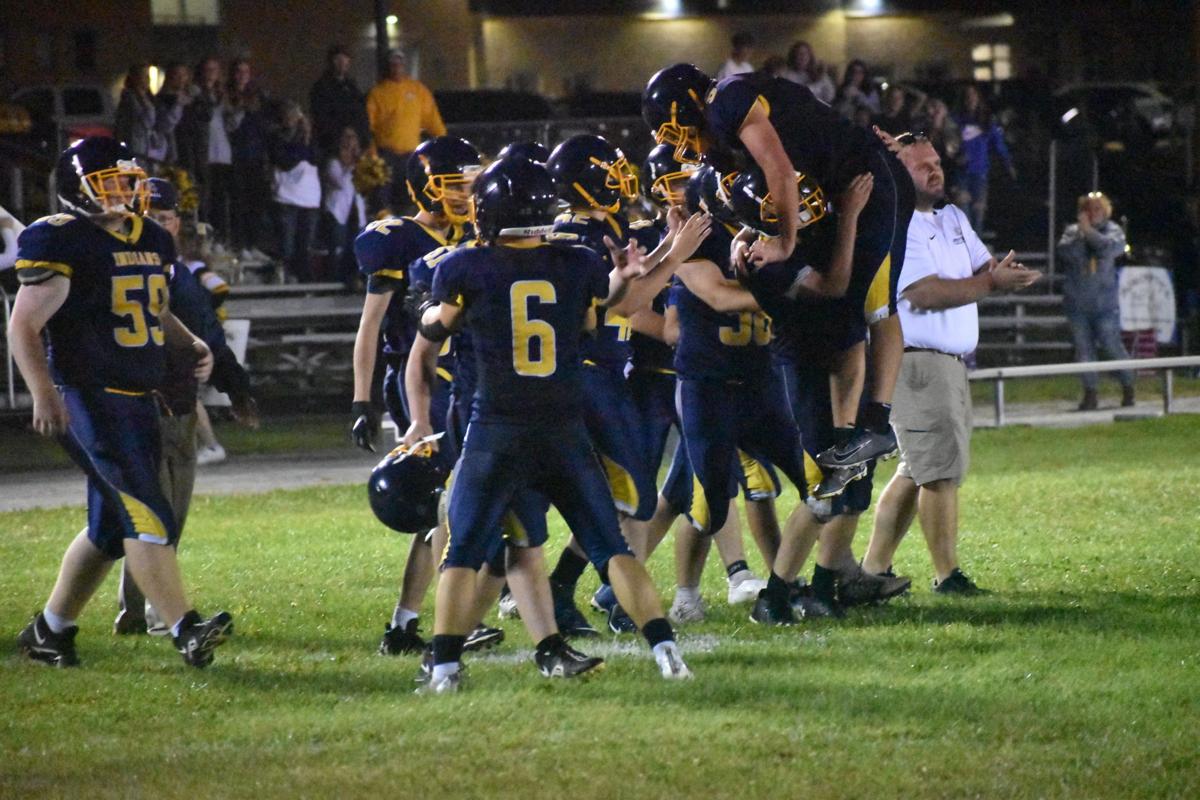 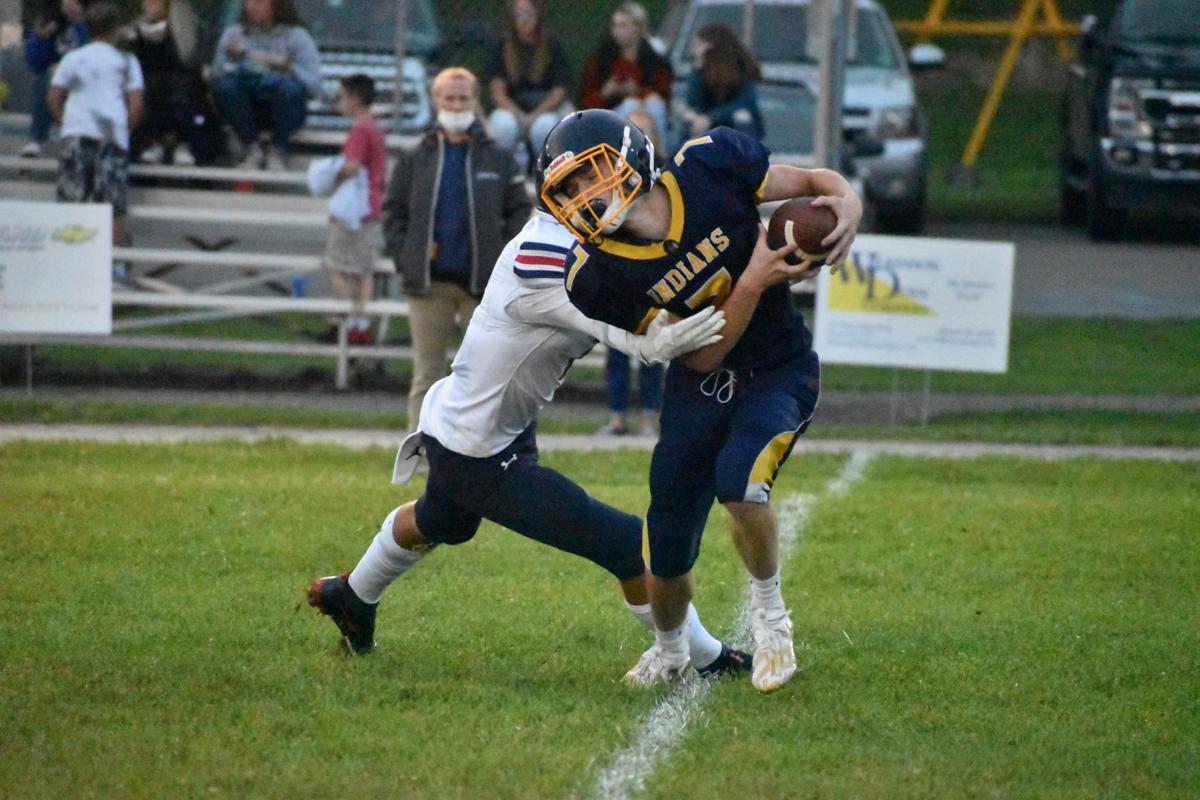 CV freshman Timmy Freeman plows through the teeth of the Sayre defense during their 26-19 win on Saturday, Sept. 4.

CV’s Tucker St. Peter breaks up a pass in the fourth quarter during the Indians 26-19 win over Sayre on Saturday, Sept. 4.

The CV football team celebrates a fourth down stop in the waning moments of the fourth quarter as they sealed their victory over the Sayre Redskins on Saturday, Sept. 4.

WESTFIELD — With 53 seconds remaining here in Westfield in a bout between the Sayre Redskins (1-1) and the Cowanesque Valley Indians (1-1) football teams, junior CV quarterback made the play of the game, calling his own number to score the deciding touchdown and propel CV to a huge victory over the Redskins by a score of 26-19.

“We were trying to run 42 which was the play we ran before with Timmy Freeman,” CV’s Jake Schmitt said of the play. “So we were going to run 42, but then one of the guys said ‘Let’s run command,’ and we did it. That play was on the o-line though, I didn’t do crap, that whole play was about the offensive line.”

The Indians were able to run wild on the Sayre defense throughout the evening, and the offensive and defensive fronts won the battle in the trenches that dictated the outcome of the game.

The CV offense ran the ball 42 times for 209 yards and three touchdowns while playing strong defense against a Sayre team that bullied Towanda just a week ago.

“Our offensive line played well tonight,” Head Coach Mike Schmitt said. “I would say that Kade Sottolano, Mike Sipps, Nick Robbins, Aspyn Dennis and Ean Bump, are all two-way players but they moved the ball and moved some pockets and Tim (Freeman) is great at going north and south.”

Though CV was able to impose their will on the fronts, they were also able to get some help from Sayre. Some sloppy plays throughout the game constantly put them behind the sticks, which is what stalled out their first drive of the game.

Two fumbled snaps would push them back and force them to punt, with CV taking over with good field position.

After a nice catch and run for senior Tucker St. Peter pushed the ball down inside the 10-yard line, freshman Freeman would bully his way into the endzone for the first touchdown of the day. Tanyon Brown made the extra point and CV took the first lead of the game.

But Sayre would respond, with quarterback Brayden Horton throwing a pass to Luke Horton who weaved through the defense into the endzone with only 1:23 left in the first quarter after a long drive highlighted by a spectacular catch by Jackson Hubbard.

Sayre would make the extra point, and tie the game in the first quarter.

CV would struggle to get on the board in the second quarter, with a fumble on an option play on the next drive that set up the second Sayre touchdown of the half.

Brayden Horton would punch it in from one-yard out on the goal line to give the Redksins their first advantage of the night with the score of 13-7.

Neither team would score again before halftime, despite CV forcing an interception with senior captain Mikey Sipps corralling a pass halfway through the frame, but the Indians wouldn’t be able to capitalize on the mistake.

In the second half, the run game and physicality started to wear down on the Redskins, and the Indians started to dominate.

In the third quarter, the Indians would strike first, with Brown scoring a touchdown on a nice out route, having it called back for holding and then scoring again on nearly the same route.

The touchdown tied the game at 13 with 7:40 remaining in the quarter and the Indians showed an abundance of confidence and energy to open the half.

The teams would trade turnovers, with CV getting a second interception from Sipps and Sayre getting it right back on a fumble, but neither team was able to mount any sustainable drives as the quarter came to an end with the score dead even.

Sayre would squander a handful of opportunities in Indians territory, failing to convert on fourth down multiple times, and the Indians would finally break the draw with just under eight minutes left in the frame.

Freeman would once again plow through the teeth of the Sayre defense and carried multiple defenders for a five-yard touchdown and a 19-13 lead heading down the stretch.

Sayre would find a way to respond on the next drive, with Brayden Horton making play-after-play for his team before punching it in on a run play. CV would block the extra point, and once again the game was scored, with only 4:59 left.

CV would be helped by a few key Sayre mistakes, none more glaring than a big hit on Jake Schmitt on a third and long play out of bounds that gave them a fresh set of downs, and the eventual victory.

Schmitt would punch it in after a nearly four-minute drive that gave the Indians a 26-19 lead.

Sayre would threaten at the end, with Luke Horton pulling down a catch and making it to the seven-yard line, but it wasn’t enough as time expired and the CV sideline exploded with joy.

“Everyone doubted us, and we still came out here and kicked their butts,” Sipps said. “It just feels so good.”

The win could be one of the best for the CV football program in many years, but the team is looking to do even more damage and change the perspective of what they are.

“I don’t know if this is a statement win, but I just think that we got sick of hearing this all week: That CV team plays hard. I got tired of hearing that CV plays really hard. I’ve heard it from everybody that I talked to and it makes me feel good but in a way, it’s like backhanded. It’s time for us to take another step forward and tonight we were able to do that,” Coach Schmitt said.

Defensively, the Indians were strong against an offense who ran all over Towanda, only giving up 19 points and were led by a two interception and nine tackle day from Sipps.

Brown also had eight tackles while St. Peter and Sottolano both added five tackles in the win.

Sophomore Ean Bump racked up two sacks as well and had two total tackles from the defensive tackle position.

The receivers were led by two standout days from seniors Brown who had four catches for 46 yards and a touchdown and St. Peter caught six passes for 45 yards. Elliot Good also was able to add four catches for 31 yards while also handling four carries for eight yards.

Defensively, the Indians were strong against an offense who ran all over Troy, as they were led by a two interception and nine tackle days from Sipps.

Brown also had eight tackles while St. Peter and Sottolano both added five tackles in the win.

Sophomore Bump racked up two sacks as well and had two total tackles from the defensive tackle position.

St. Peter also made a few of the biggest pass break-ups throughout the game and was a hawk in the secondary. He had two of those break-ups on Sayre’s final drive, one of them saved a possible game-tying touchdown.

Freeman was the workhorse in the backfield, racking up 154 yards on just 25 touches while also scoring two touchdowns.

The Indians now gear up for a home contest against Northwest on Friday, Sept. 10 at 7 p.m. as they look to pick up their second victory of the season.