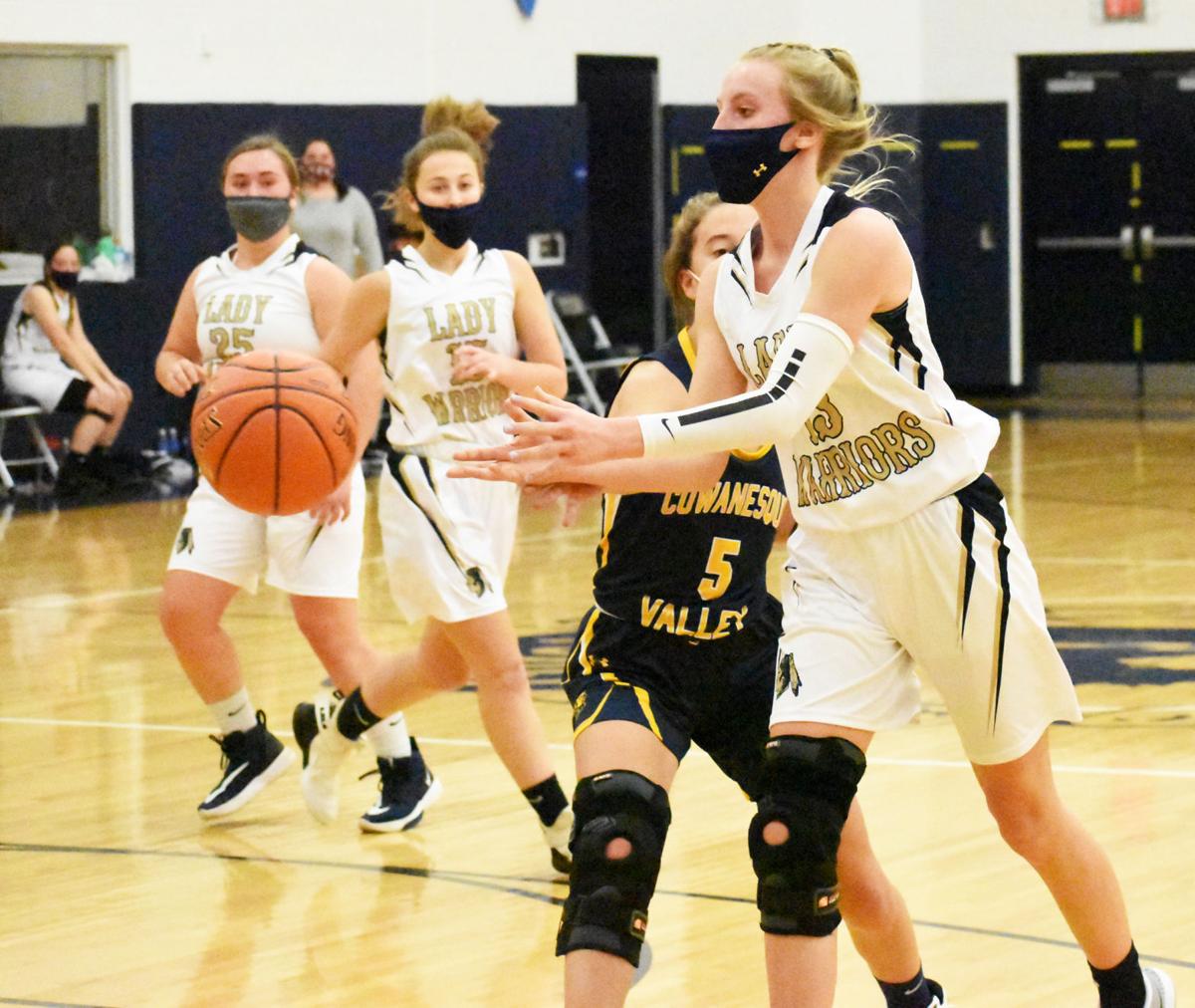 Taylor Rae Jones dishes out one of her seven assists on the night during the Williamson Lady Warriors win over the Cowanesque Valley Lady Indians on Friday, Jan. 8. 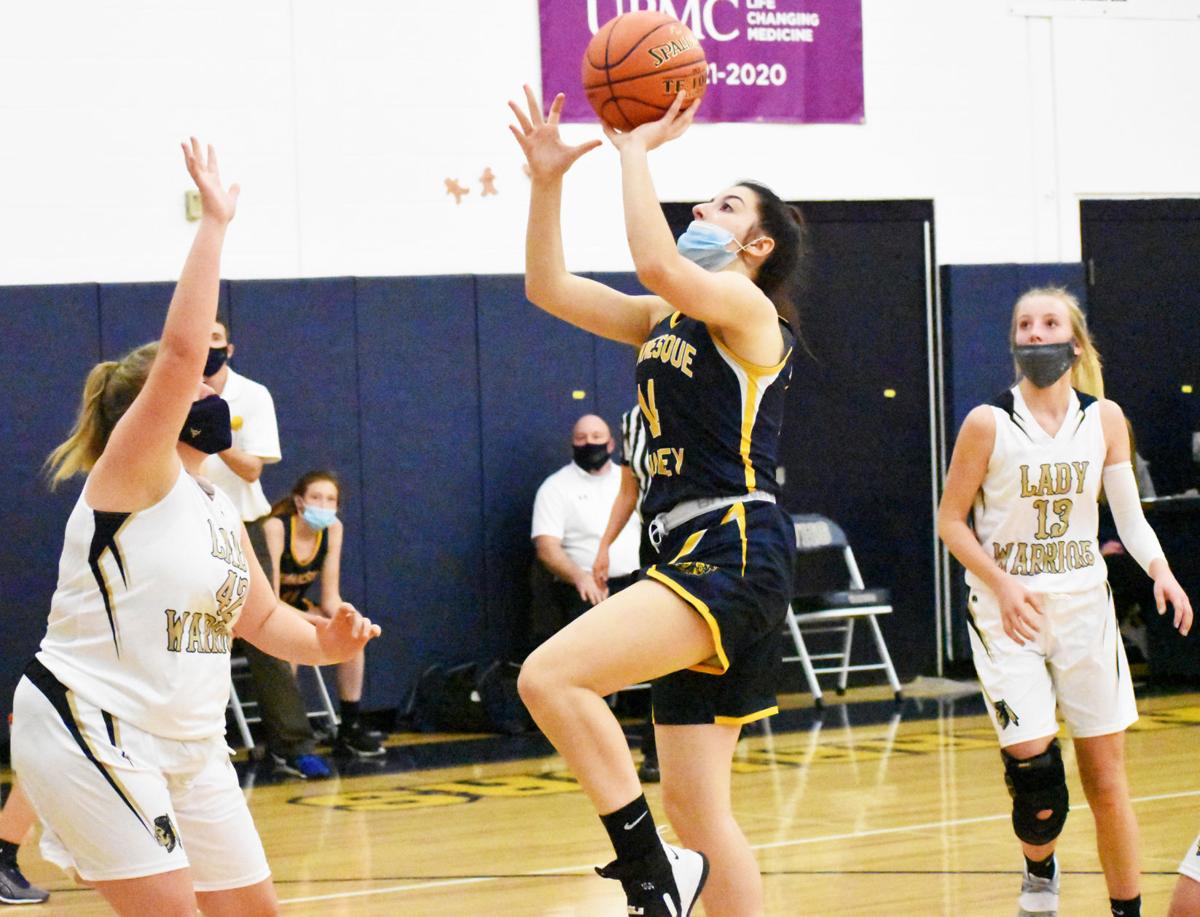 Mackenzie Sarine goes up for a basket during the Cowanesque Valley Lady Indians loss to the Williamson Lady Warriors on Friday, Jan. 8.

Taylor Rae Jones dishes out one of her seven assists on the night during the Williamson Lady Warriors win over the Cowanesque Valley Lady Indians on Friday, Jan. 8.

Mackenzie Sarine goes up for a basket during the Cowanesque Valley Lady Indians loss to the Williamson Lady Warriors on Friday, Jan. 8.

The Warriors were coming off a challenging past two seasons in 2019 and 2018, and after failing to get a win in any of their 22 contests in 2019, and only winning once in their 2018 campaign finishing 1-21, they were able to come out of the gates as a new team and captured their first win of the season.

Latiesha Peterson led all scorers with 16 points and as one of the only two seniors on the roster was overjoyed by the effort her teammates put into the win.

“Honestly, it feels great to have freshmen come up that can just play with us,” Peterson said.

The freshman class put on a show for the Warriors in the win, with Taylor Rae Jones putting up a near triple-double with nine points, 11 rebounds and seven assists on the night.

Her immediate impact was evident throughout the evening and should be a player to watch over the next few seasons.

“You’re going to know who she is,” Williamson Girls Basketball Head Coach Marissa Allen said on Jones’ breakout performance. “She’s super versatile. So that is a huge advantage for us.”

Another freshman who played a pivotal role in the win was Adelaide Schmitt, who was a force in the paint and recorded 12 points and seven rebounds on the night.

The game started out slow on both sides, with the apparent rust of the extended layover of not playing much prior to the game as well as limited gym time showing early. Neither team found much of an offensive groove throughout the first quarter.

Both teams combined to score only 12 points, but the Lady Warriors clung to a slim 7-5 lead heading into the second quarter.

In the second quarter Jones started to become visibly more comfortable on the floor and strung together a few extremely nice plays.

After a nice move near the basket for a layup and a slick dump-off pass to the paint for Schmitt, the Lady Warriors started to pull away.

The CV girls didn’t go quietly though, and started to claw back in the final minutes of the half thanks to some timely baskets by senior Abby Ackley and the Lady Indians closed the quarter on a 5-2 run and remained within striking-distance with the score at 19-13 with Williamson in the lead.

In the second half, the Warriors continued to stifle the Indians’ runs, and a Peterson three-pointer late in the fourth quarter put the game on ice.

“I think you will see a lot of growth this season,” Allen said. “I think today I saw a lot of really good things, a lot of promise. I know we still have a long way to go, but if we can keep people healthy, because our numbers are fairly low…. But if we can do that, I think we might surprise some people. So starting off with a win is a big boost for us.”

The Lady Indians were led by senior Ackley who notched a team-high 13 points and Paisley Nudd who added six points in the effort.

The Indians next contest was a matchup against one of the top teams in the Northern Tier League against Athens, who topped the CV girls by a score of 69-14 and fell to 0-2 on the year.

The Cowansque girls continued to stumble out of the gates in the opening week of the season and in their next contest fell to Canton by a score of 64-24 to move to 0-3 on the season.

The loss of two senior players opting out of playing this season in Makayla Vargeson and Megan Wattles has shown early on for the Lady Indians, who are still looking for an identity without some their most productive players from last year.

Williamson’s next contest was a home matchup against the Northeast Bradford Lady Panthers where they were unable to string together wins as they fell by a score of 56-27.

The Lady Indians are back in action on Monday, Jan. 18 as when they get another shot at Williamson as they search for their first win.

The Lady Warriors next scheduled contest is on Thursday, Jan. 14 as they travel to Towanda to take on the Lady Black Knights.