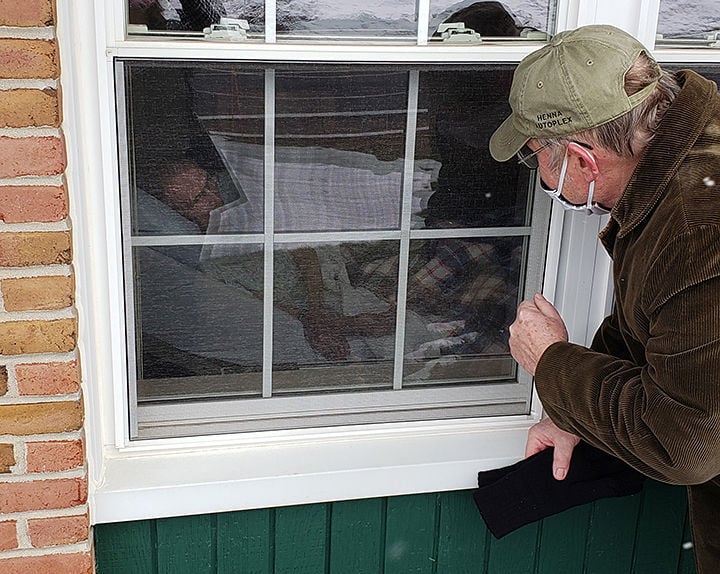 David Scrimshaw waves to his dad, Paul, 99, a retired Navy captain, from outside Broad Acres Nursing Home in Wellsboro. 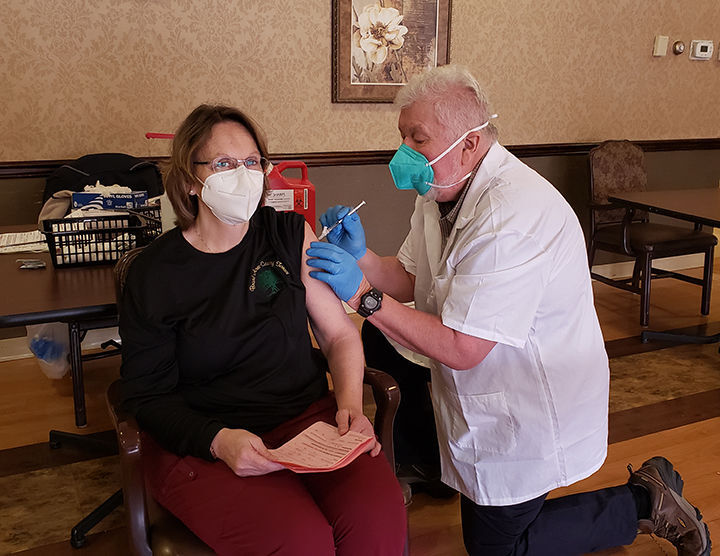 Lori Valentine, director of nursing at Broad Acres in Wellsboro, receives the second round of the COVID-19 vaccine on Monday, Jan. 18.

David Scrimshaw waves to his dad, Paul, 99, a retired Navy captain, from outside Broad Acres Nursing Home in Wellsboro.

Lori Valentine, director of nursing at Broad Acres in Wellsboro, receives the second round of the COVID-19 vaccine on Monday, Jan. 18.

On Monday, residents and staff at Broad Acres Nursing Home in Wellsboro received their second and final dose of the COVID-19 vaccine.

“It’s a huge relief,” said Brandon Dresser, administrator of Broad Acres. “We’re one of the first nursing homes in the state to be almost fully vaccinated.”

Dresser said 60% of staff members and 90% of residents received the first dose of the vaccine on Dec. 28 and the second dose Monday, Jan. 18. Since receiving the first round, only one resident has tested positive for the virus.  The last resident to test positive was on Jan. 1, with no employee positive tests since Jan. 7.

“We’re hoping to have everyone out of the red zone by Wednesday (Jan. 20),” Dresser said on Monday, referring to residents being in quarantine. “We have two active cases in the building right now – a long-term resident and a newly admitted resident who did not contract COVID here. There are no active cases among staff right now.”

According to the PA Department of Health’s website, six long-term care facilities in Tioga County have had a total of 166 cases among residents, 88 cases among staff and 36 deaths.

The facility saw its first COVID case in late October, with 82 residents and 52 employees testing positive between then and Jan. 7. Twenty residents died as a result of the virus, the last in mid-December.

“It’s changed the way we do everything,” he said. “It’s been especially tough when you lose staff who are quarantined for 14 or more days. We’ve had to use temporary agency staff, but they don’t know the residents like our regular staff members do so it’s harder to provide the same level of care.”

Broad Acres housed 103 residents prior to its first COVID case, down to 73 residents as of Monday. The facility has about 130 employees.

“We weren’t taking admissions for quite a while,” said Dresser. “We stopped visitations in September, but we’re hopeful if there are no more cases within 30 days, we can open it back up.”

He said residents’ family members have been visiting through outside windows, over video calls, on either side of the building’s glass front door and in a special room with a plexiglass barrier.

Dresser said since there’s been no communal dining or activities among residents, staff members have gotten creative to offer enrichment activities for residents, such as holding bingo in the hall with residents at their doorways. Residents also received talk therapy and more one-on-one activities with staff.

“It’s a huge challenge for residents having to spend more time in their rooms, but we hope that changes soon,” said Dresser. “We’re ready to get back to as normal as soon as we possibly can.”

Dresser said other safety measures have included checking temperature of anyone entering or exiting the building, requiring everyone to wear masks and stay six feet apart, and testing all residents and staff twice a week using PCR (polymerase chain reaction) nasal swab tests. Anyone experiencing symptoms before getting PCR test results is given a rapid test, which though slightly less accurate than PCR tests can produce results in one to two minutes.

“As soon as a staff member experiences symptoms, they’re given a rapid test and sent home if they test positive,” said Dresser, adding that he was one of the first staff members to contract the virus. “I had moderate symptoms. I lost my sense of taste and smell, had a fever, body aches.”

Dresser said he’s received no reports of adverse side effects to the vaccine, except slight pain at the injection site, and that he encourages everyone to get the vaccine as soon as it’s available to them.

Education has also been a big part of the facility’s response to the virus. Broad Acres partners with North Penn Comprehensive Health Services which provides physician and nurse practitioner services to the facility, and works closely with Jim Nobles, president and chief executive officer of North Penn and lead of the Tioga County COVID-19 Task Force.

Dresser said Nobles was instrumental in organizing a drive-by parade for local healthcare workers that helped raise the spirits of the staff.

“We’ve received so much community support – the Wellsboro Rotary, the Wellsboro Women’s Choir, Carleton Healthcare and Rehabilitation Center, Representative Clint Owlett’s office, Develop Tioga, C&N Bank, Senator Joseph Scarnati’s office and many others. We can’t thank them enough,” said Dresser. “In turn, we want the community to know we’re there for them. A lot of people fear putting their loved ones in homes right now, but we want people to understand that this is a safe place for them.”