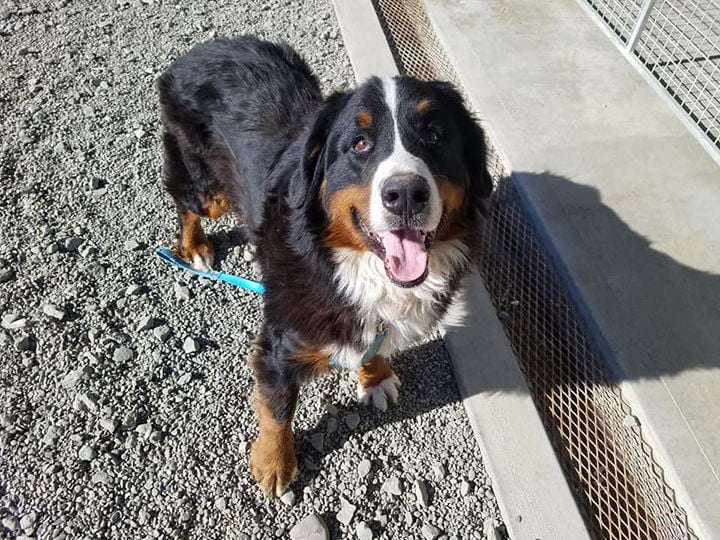 Entei, who was on the run for a year, is now safe at Second Chance Animal Sanctuaries. 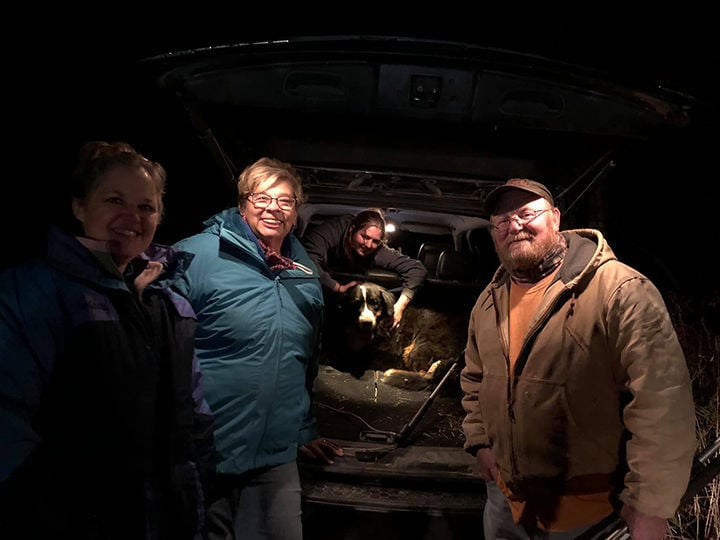 Members of the team who rescued a Bernese mountain dog on the run for a year include, from left, Lori Ranck, Lynda Barron, Laura Clarson and Jim Melko.

Entei, who was on the run for a year, is now safe at Second Chance Animal Sanctuaries.

Members of the team who rescued a Bernese mountain dog on the run for a year include, from left, Lori Ranck, Lynda Barron, Laura Clarson and Jim Melko.

A dog who evaded rescuers for nearly a year is now safe and sound.

A Bernese was first reported running at large near Lawrenceville last November, said Laura Clarson, shelter manager at Second Chance and founder of the Tioga County Cat Project. A photo of the dog was captured by a trail camera on Boom Station Road and posted to Facebook. Knecht and Clarson tracked the dog and set traps, but sightings soon went cold.

This past September, posts started circulating on Facebook that a dog thought to be a Bernese was spotted near West Branch Road and Route 660, near the Pennsylvania Grand Canyon. According to posts and comments, several people saw a similar dog in that area over the summer. He was seen eating a decomposing deer carcass and was reportedly almost hit by vehicles at the intersection by the Yellow Basket Shop.

“Everyone I talked to said they just thought it was someone else’s dog,” said Lori Ranck of Wellsboro, who assisted in Entei’s rescue. “The earliest sighting of him in that area was almost a year ago. I wish I knew how he got there from Lawrenceville.”

Ranck and Lynda Barron of Blossburg have helped rescue several lost dogs since BamBam, a dog from New York City, was lost in Wellsboro over the summer.

“How would you feel if you were lost and there was no one to help you?” said Ranck on why she started helping lost dogs. “Since BamBam, it’s been one after the other. Our team is growing with each rescue and the more we do, the more we learn and can educate others. We’re so thankful for Krys and Laura guiding us on what to do and when. They’re the experts, but it takes a community.”

As in previous cases, Ranck and the core rescue team, including Knecht, Clarson, Barron, Ranck’s husband Gary and Leonard Kreger, gatheed reported sightings to determine where best to set a trap. That ended up being Jim Melko’s property on Route 660, where he told Ranck the dog frequented nearly every day.

“The first trap we set, a bear cub got in and bent it. Then we set a regular dog trap and tried all kinds of foods, but the dog would eat everything except the food in the back of the trap needed to trip it,” said Ranck.

The rescue took a hopeful turn after Del Schriner of Wellsboro donated a large chain link kennel that the team rigged into a makeshift trap. Ranck said Papa the Butcher in Mansfield and Weis Markets in Wellsboro donated meat scraps for bait.

The kennel was set up with trail cameras and alarms to alert Ranck if the dog was nearby or inside the kennel, but the trap wasn’t triggered for several weeks. She and Melko left food every day to establish a pattern of when the dog visited and get him comfortable with the kennel.

“On the trail cam one day, I saw him go in the kennel and lay down. He had never done that before. That’s when I knew he was comfortable and ready,” said Ranck.

The trap was set this past Saturday. Ranck said after a few mishaps, they heard whining near the trap late Sunday night.

“Jim went down the path to check the trap and that dog howled like nothing I’ve ever heard before,” said Ranck. “The second alarm never went off because he came to the trap from a different direction than normal. I couldn’t believe we finally got him.”

Knecht and Clarson arrived on scene to handle the dog, which was expected to be feral after being on the run for so long.

“He barked and sort of growled as they approached the trap, but then they worked their magic and the next thing you know, they have him on a catch pole and you’re petting him,” said Ranck.

Both Knecht and Clarson said up until he was captured, they had doubts Entei was the same dog they searched for last year, but now they’re positive it’s him.

“The pictures looked similar, but so do a lot of Bernese,” said Knecht. “After we got him, his markings matched 100% to the photos from a year ago.”

Clarson said Entei’s condition also suggests he was on the run a long time; he was dirty and covered in ticks, bugs, scabs and mats. She said he has no major injuries and is at a relatively healthy weight since being fed at the trap site for the past several weeks. Entei is estimated at no older than two years old and is neutered and microchipped, but the chip isn’t registered, meaning there is no associated contact information.

Clarson said since being rescued, Entei has been bathed, had ticks removed and is adjusting well at Second Chance. “He’s very mellow. He loaded in the car great and is walking on leash for me. I’m super impressed.”

Anyone who might know Entei or someone who could be missing a Bernese mountain dog is encouraged to contact Second Chance at 570-376-3646 or secondchanceas@yahoo.com. Second Chance isn’t accepting adoption applications or visitors for Entei at this time, but anyone interested should watch their Facebook page for updates.

“We’ll probably never know his full story, where he came from or who he belonged to,” said Clarson. “All we can do now is make sure he adjusts and has the best life possible.”