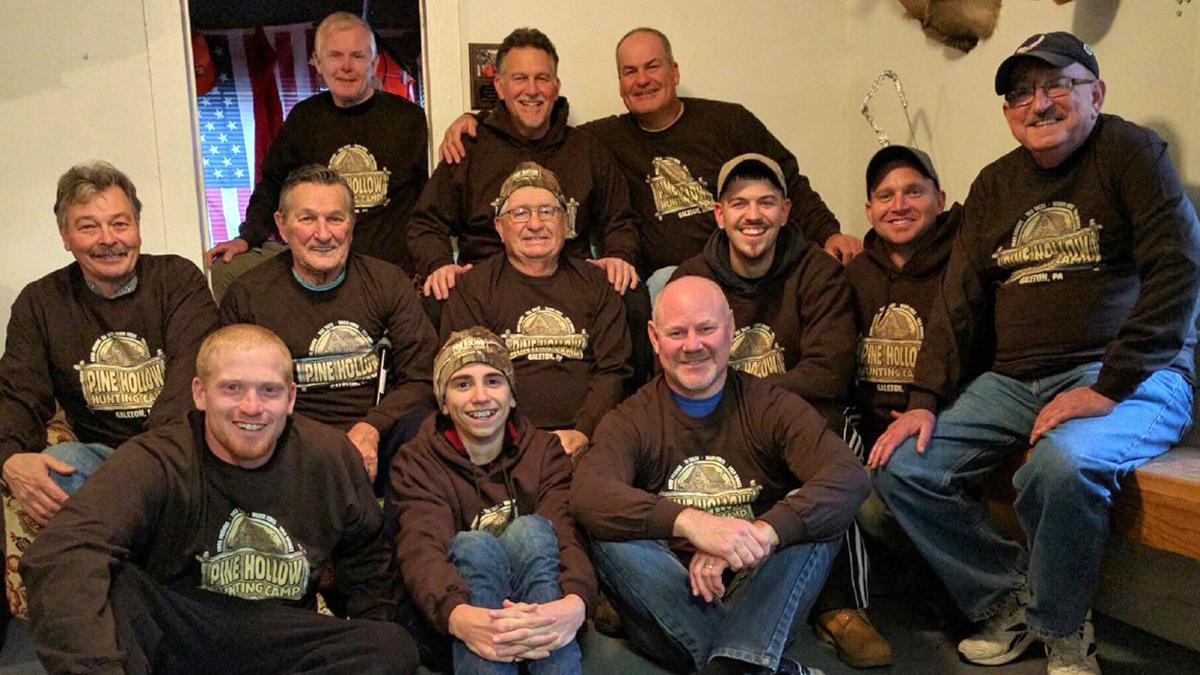 Members of the Pine Hollow Sportsman’s Association pose for a photo during a hunting trip about three years ago. Connor Fahey is seated in the front row, center. 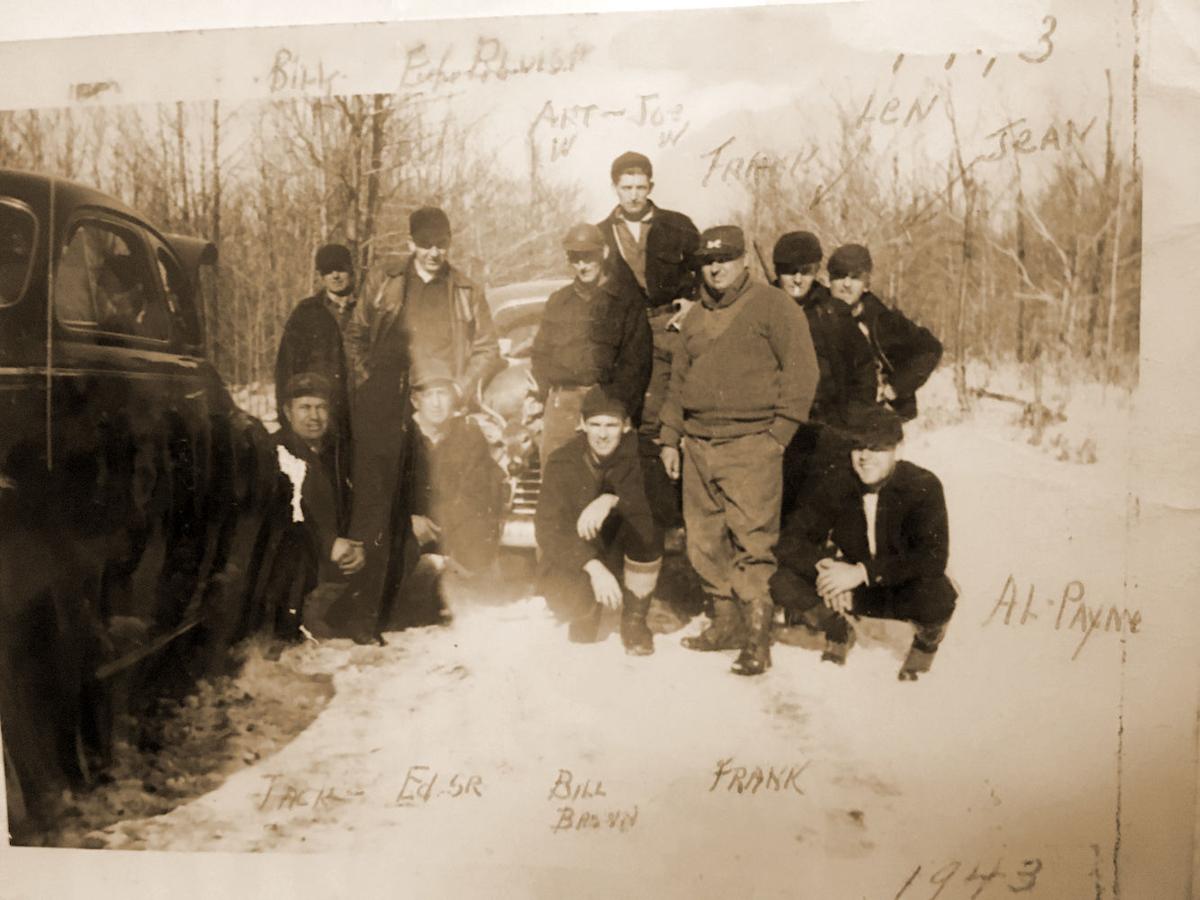 This photo, taken in 1943, shows members of the Pine Hollow Hunting Club. Members of the group have been hunting in the Tioga State Forest for about 80 years.

Members of the Pine Hollow Sportsman’s Association pose for a photo during a hunting trip about three years ago. Connor Fahey is seated in the front row, center.

This photo, taken in 1943, shows members of the Pine Hollow Hunting Club. Members of the group have been hunting in the Tioga State Forest for about 80 years.

POTTER AND TIOGA COUNTIES — While some may hunt for bargains the day after Thanksgiving, hunters will make a trek to the Northern Tier for different game.

The Pine Hollow Sportsmen’s Association is one of those groups that will follow a long-standing tradition of spending the first week of deer rifle season in Potter and Tioga counties.

It’s a tradition that winds its way back to the 1940s, said Edward DeKoyer, 83, from outside Philadelphia. DeKoyer’s father, Edward Sr., and his brothers Jack and Harold may have started hunting here earlier, but the earliest photo he has is dated 1943.

DeKoyer began his hunting tradition in 1952; 69 years ago. His friend from third grade, Ed Huett Sr., joined the group in 1968.

“I don’t think we missed a year since then,” said DeKoyer.

It’s a family event, with several families bringing sons, nephews and now grandsons to not only to hunt, but also to spend time together maintaining the properties.

“Honestly, the hunting is important but I think it’s mostly the guys. The guys inspire me,” said Connor Fahey, 16, of Hatboro, who wrote this newspaper about the club. “Even though we’re a hunting club, we’re definitely there for each other, too. We’re like family. Most of us are family.”

DeKoyer and Gary Fahey, Connor’s father, said the time together is enjoyable.

It’s changed over the years. Fahey said there are fewer but larger deer, healthier and wilder forests, and fewer hunters traveling to the area. He worries that the hunting tradition may end.

“The biggest concern I have is youth these days starting and following through with being involved in outdoors and having an appreciation and love for it,” Fahey said. “It seems like it is harder and harder for them.”

The original five or six members originally stayed in private homes. When DeKoyer got involved, they lodged at the Apple Motel, now the Terrace Cottage Motel in Wellsboro. Later, they rented a house in Rexford.

In the 1990s, the group incorporated and purchased a 100-year-old house in Galeton — where they stay — and eight acres near Beechwood Lake, where they launch the hunts.

DeKoyer and Huett, who no longer hunt, stay in the base camp to share in the excitement and the club traditions, such as cutting the shirt tails off any hunter who misses a deer. The collection fills a four- by four-foot section of wall, said Fahey.

Typically, between nine and 15 people take part in the first week of deer season. This year, they may divide into two groups due to COVID-19, DeKoyer said.

DeKoyer, Connor and his father said the most important aspect are the memories of spending time together and passing on the love of the outdoors.

“Now the big thing I love is we have work weekends,” DeKoyer said.

In April and again in October, members and their children spend a weekend doing repairs to the house. This past year, they improved plumbing and gas line replacement. Other years, it’s been windows or siding.

“The kids come up and see us doing things they’ve never done and they learn a lot,” DeKoyer said.

“One fella brought his six year old. To see them together running around in the mountains, it was just a big joy,” DeKoyer said.

Fahey works to instill that appreciation for nature in Connor and his younger brother and sister. The family visits the area for vacation, staying at the base camp which lacks both electric and running water. They celebrate Red Suspender Weekend and check out the night sky at Cherry Springs.

“My biggest contribution is spending time outdoors with the kids, always in public lands. Mostly, it’s showing them that very smart conservationists a very long time ago had the sense and decency to make millions of acres in this state as state forest land and state game land,” Fahey said. “I let them know that we are absolutely fortunate to have that.”

It’s had an impact on Connor, who started an outdoor wildlife club in school, is a member of the township environmental advisory committee and, about six times a year, travels three hours to volunteer to remove invasive species at state and local parks.

Every year is a great time.

“Opening day — it’s like magic,” Fahey said. “I haven’t had an ounce of that magic leave me over all these years. What I felt as a kid, I still feel that. Often, you lose that magic. But that opening day moment is really something special. Anything can happen. You hope for the best for your guys — safety first — and then you hope for success.”