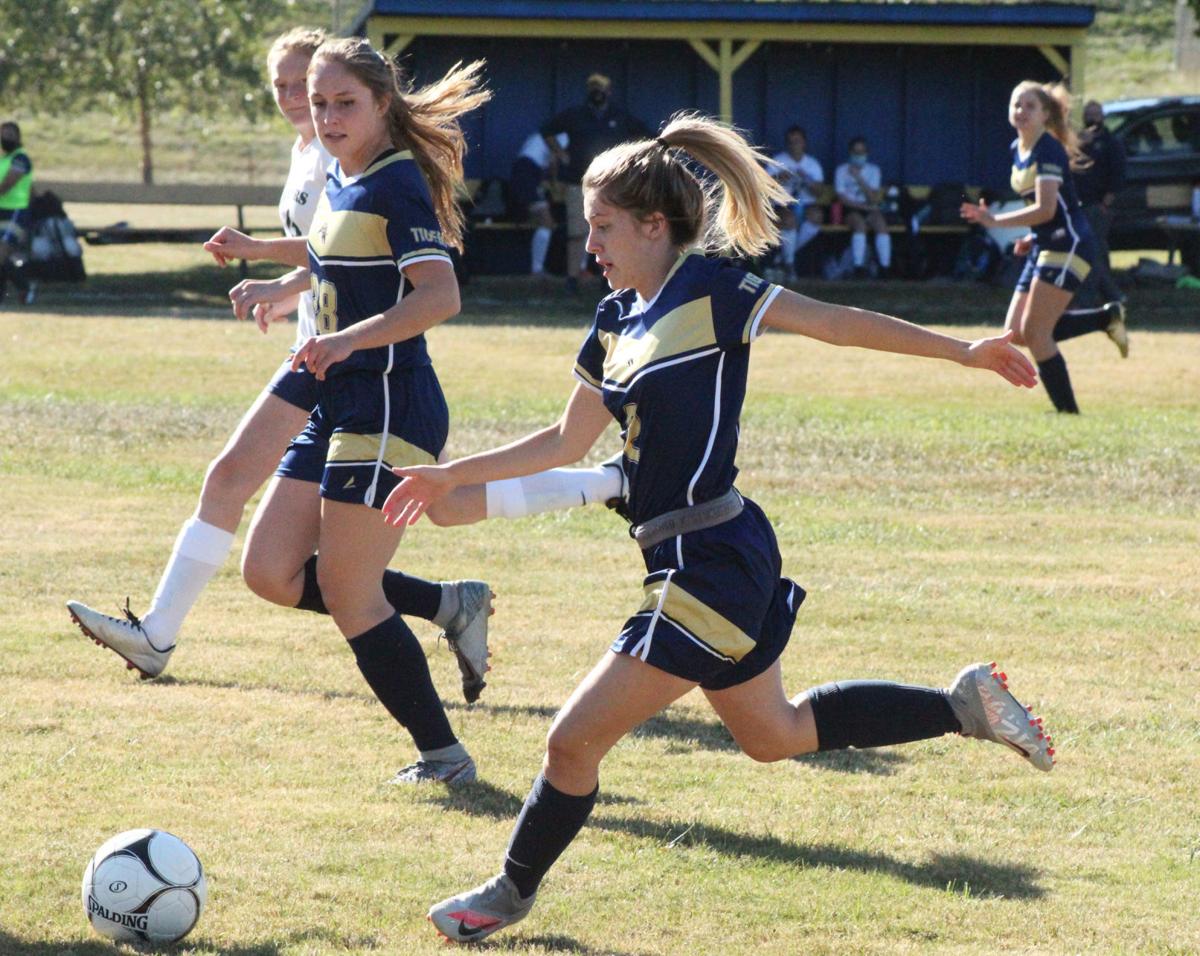 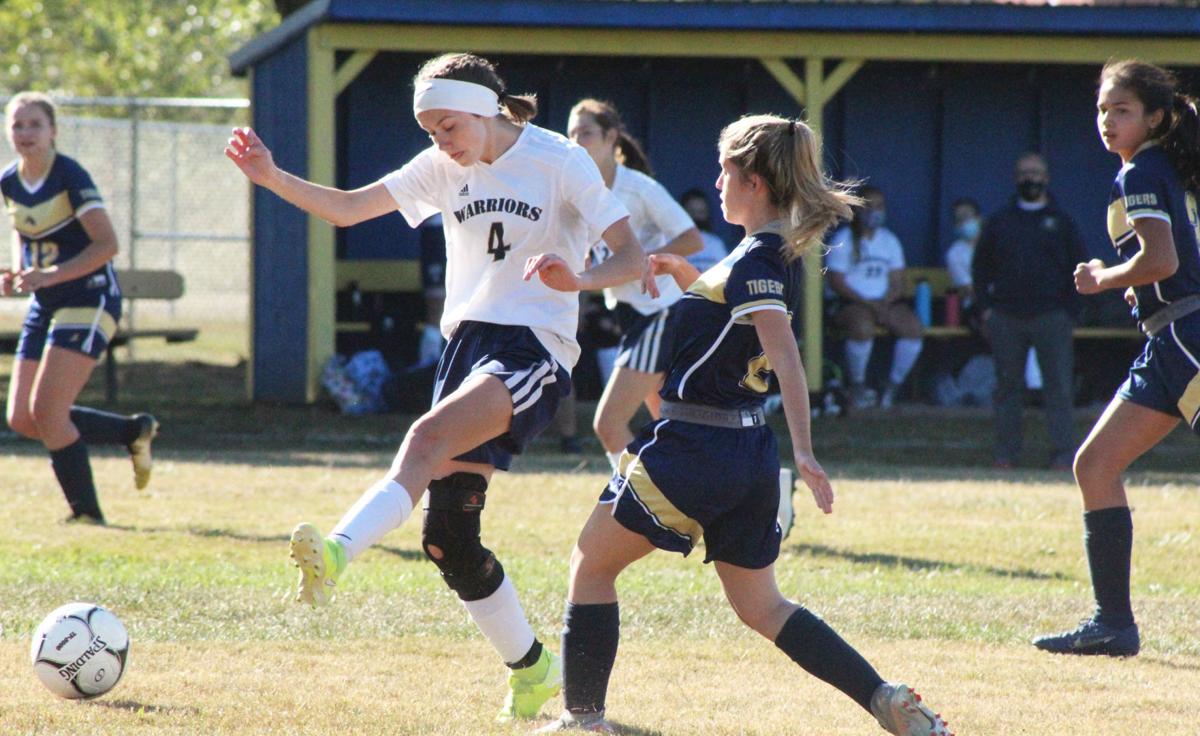 Williamson Lady Warriors Scout Abel kicks the ball to a teammate during the their draw against Mansfield on Monday, Sept. 21. 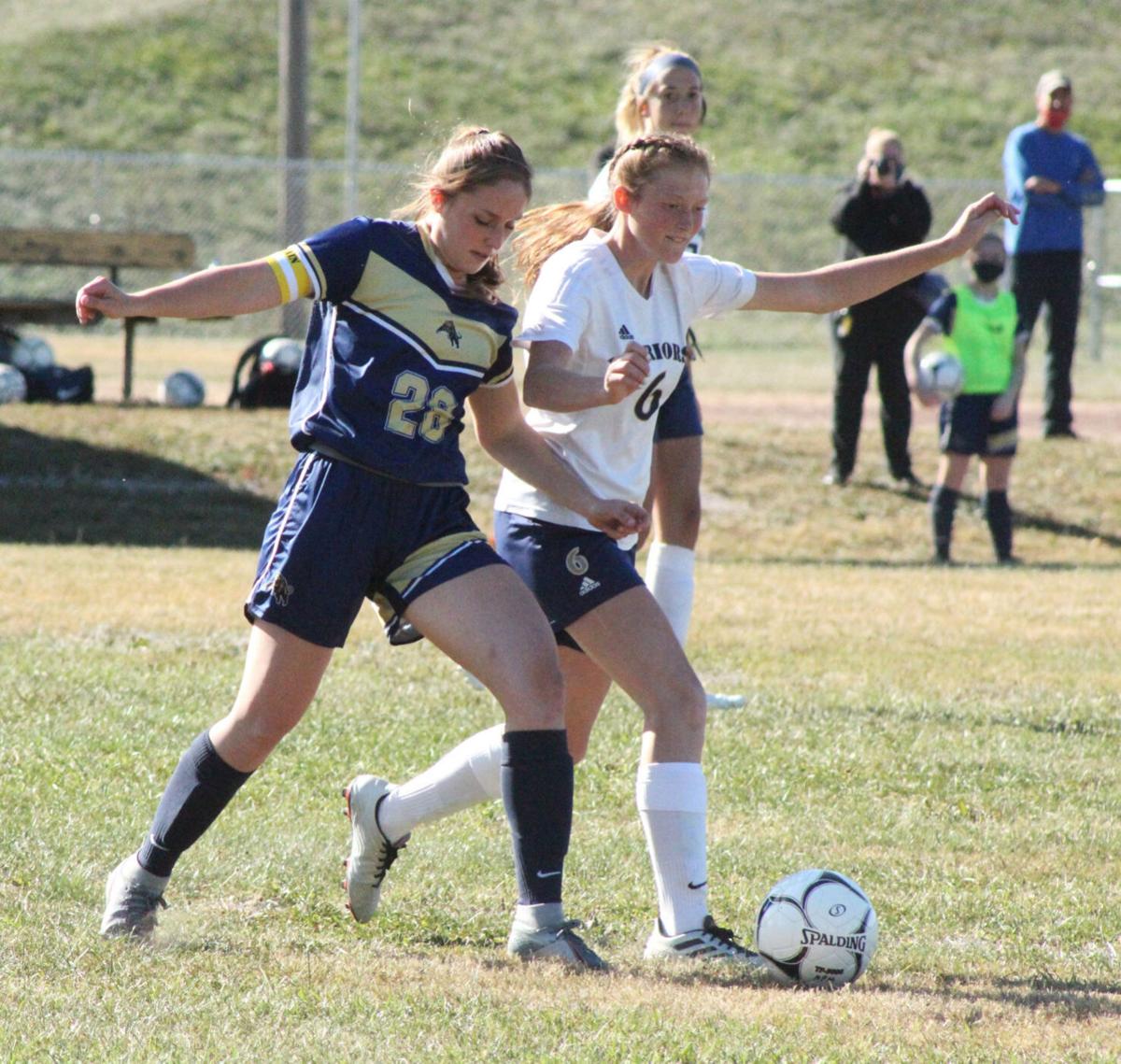 Mansfield’s Kiersten Mitstifer and Williamson’s Ruby Sherman fight for the ball during their 1-1 draw on Monday, Sept. 21.

Williamson Lady Warriors Scout Abel kicks the ball to a teammate during the their draw against Mansfield on Monday, Sept. 21.

Mansfield’s Kiersten Mitstifer and Williamson’s Ruby Sherman fight for the ball during their 1-1 draw on Monday, Sept. 21.

MANSFIELD — The North Penn-Mansfield Lady Tigers soccer team (0-1-1) hosted their first home game of the season against the Williamson Lady Warriors (1-3-1) in a tightly contested battle that saw the game come to a close at a draw, 1-1.

In the opening minutes of the game it looked as though the Williamson team might take control early, with a huge front-flip throw in by Maddison Millard that was finished off by Haley Warner at just before the five-minute mark that gave them an early advantage off a strong team play.

For the remainder of the first half it was a battle between the two winless teams, and neither was able to take an advantage with both goalies playing well to end the half. Williamson found themselves with a one goal lead, but Mansfield was still in the game getting multiple shots on goal through the period.

The rest of the game was a defensive stalemate, and despite both teams taking 15 or more shots on goal, neither were able to capitalize through regulation sending the game to overtime.

Through two overtimes, the defenses continued to perform at a high level and neither were able to break the draw at any point, ending the game 1-1 in a hard-fought match between two teams fighting until the very end.

Mansfield was led by a strong performance in the goal by Tierney Patterson, who allowed one goal and recorded 14 saves, and after a quick goal in the first half hung tough between the posts to give her team a shot to win.

With both teams unable to grab a win, Williamson will look to claim their second win of the season as they hosted Northeast Bradford (0-4) on Wednesday Sept. 23 in an extremely winnable game.

North Penn-Mansfield (0-1-1) is still looking for their coveted first win of the year, and traveled to take on the Wyalusing Lady Rams (2-0) on Wednesday, Sept. 23 as well for a matchup against a formidable opponent.