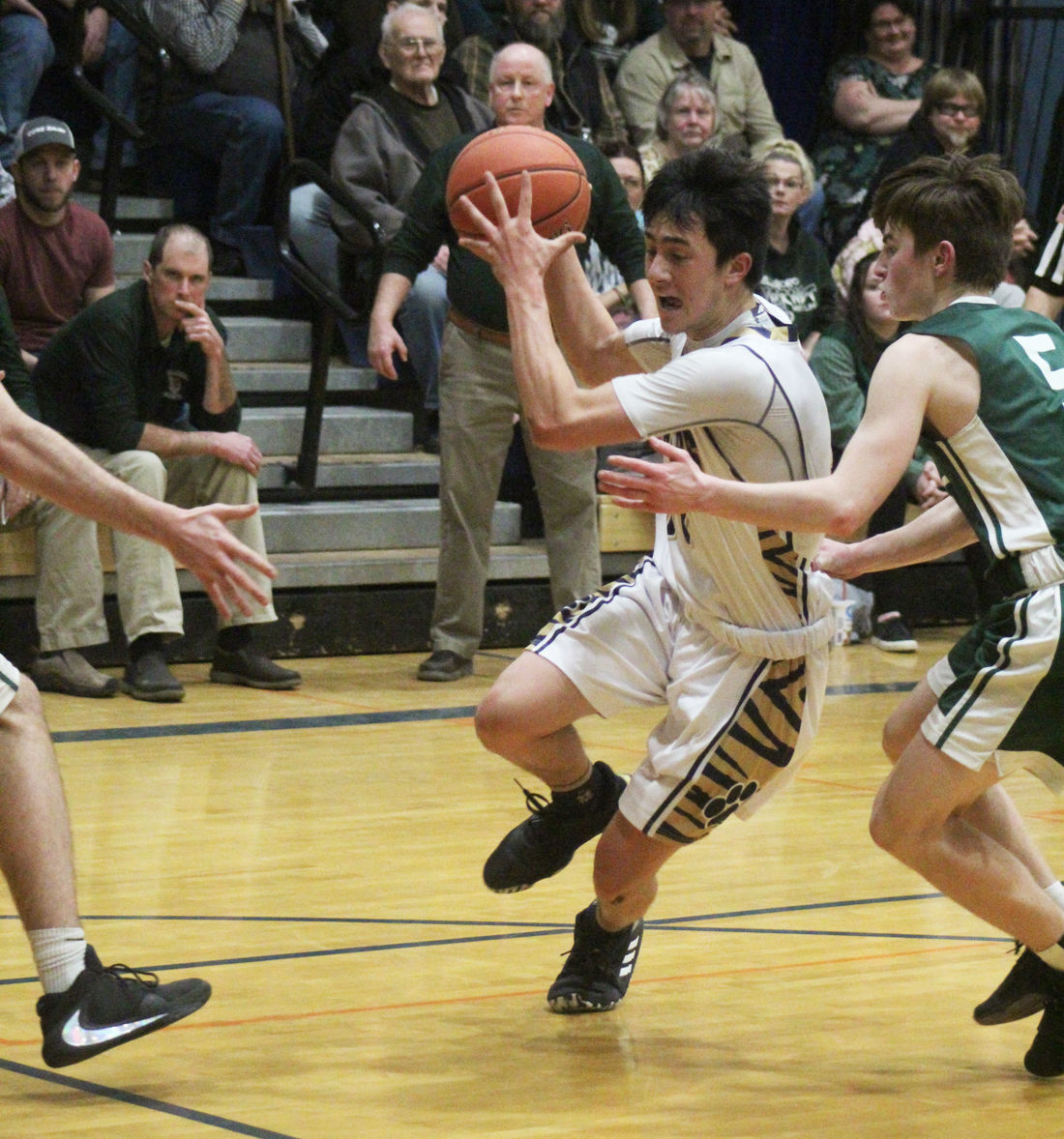 Alec Stein looks to drive during the NP-Mansfield Tigers matchup against Wellsboro.

Conner Adams controls the ball during an offensive shootout against St. Johns Neuman. 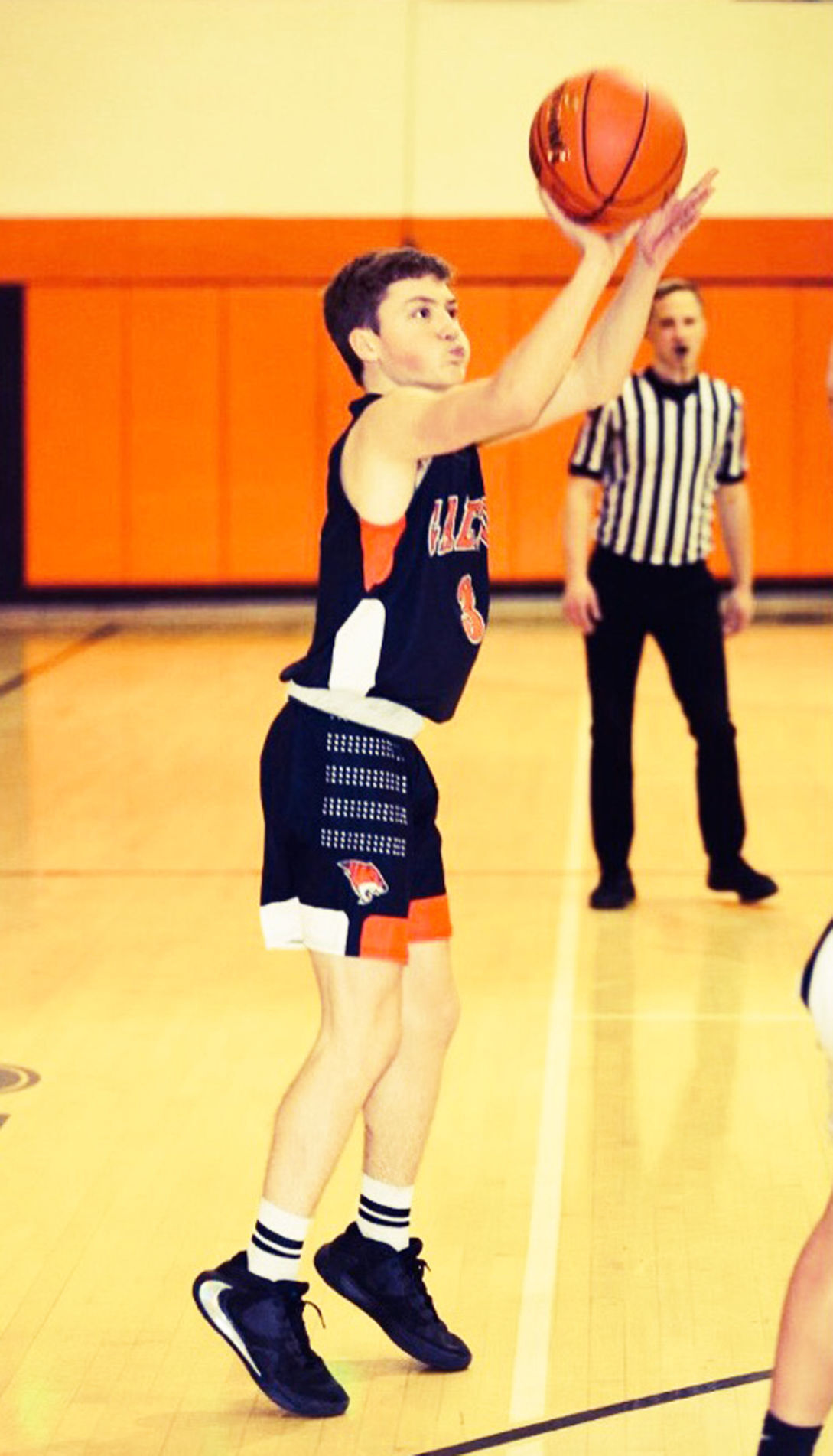 Freshman Gavin Sykora was named to the Gazette/Free Press Courier Third Team All stars, but the photo was of Noah Schutt in last week’s edition and not Sykora. 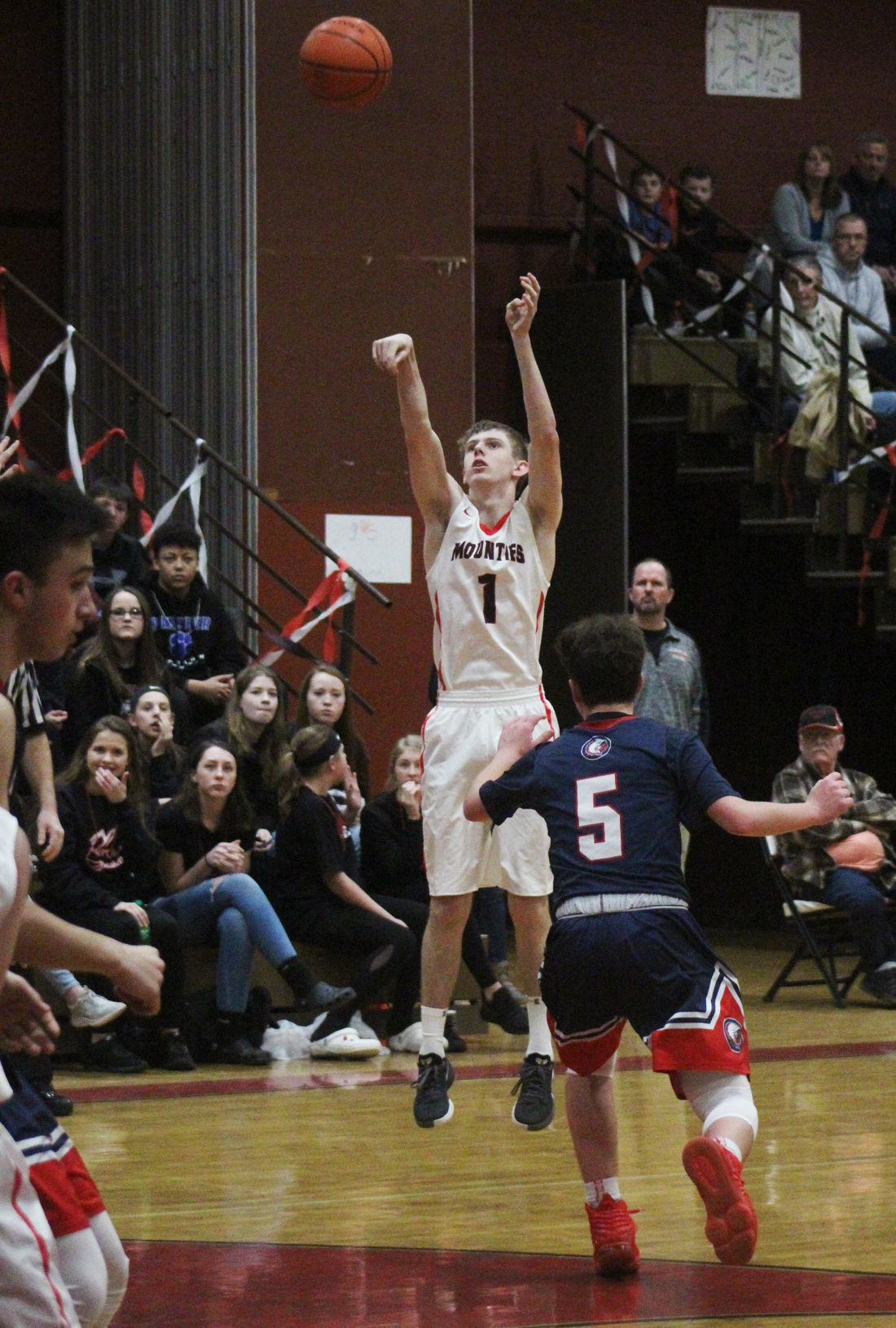 Colton Litzelman knocks down a three-pointer during Liberty’s win over Sayre on Saturday, Feb. 1. 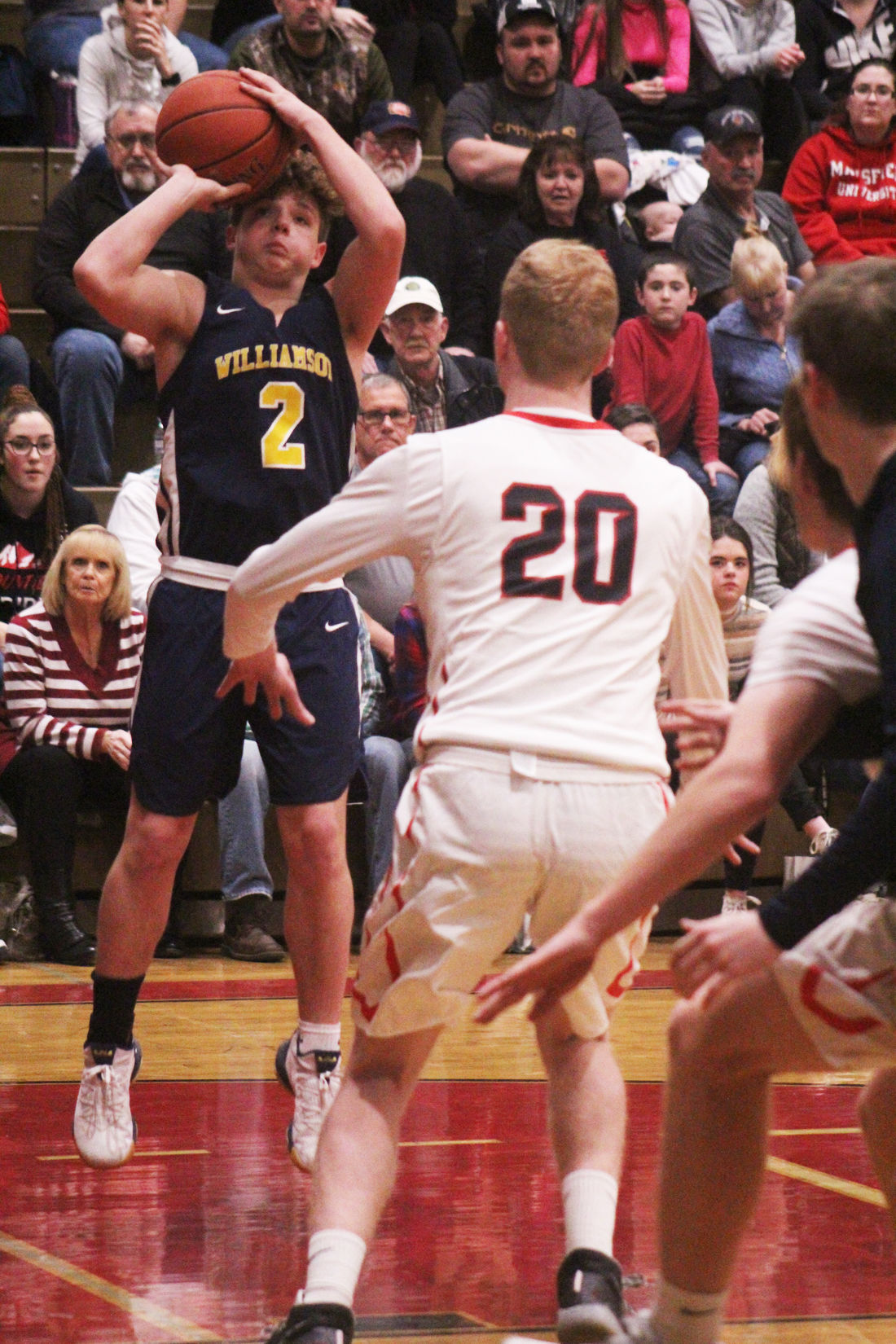 Devin O’Dell shoots a baseline jumper against Liberty during their 86-63 loss on Friday, Jan. 17. 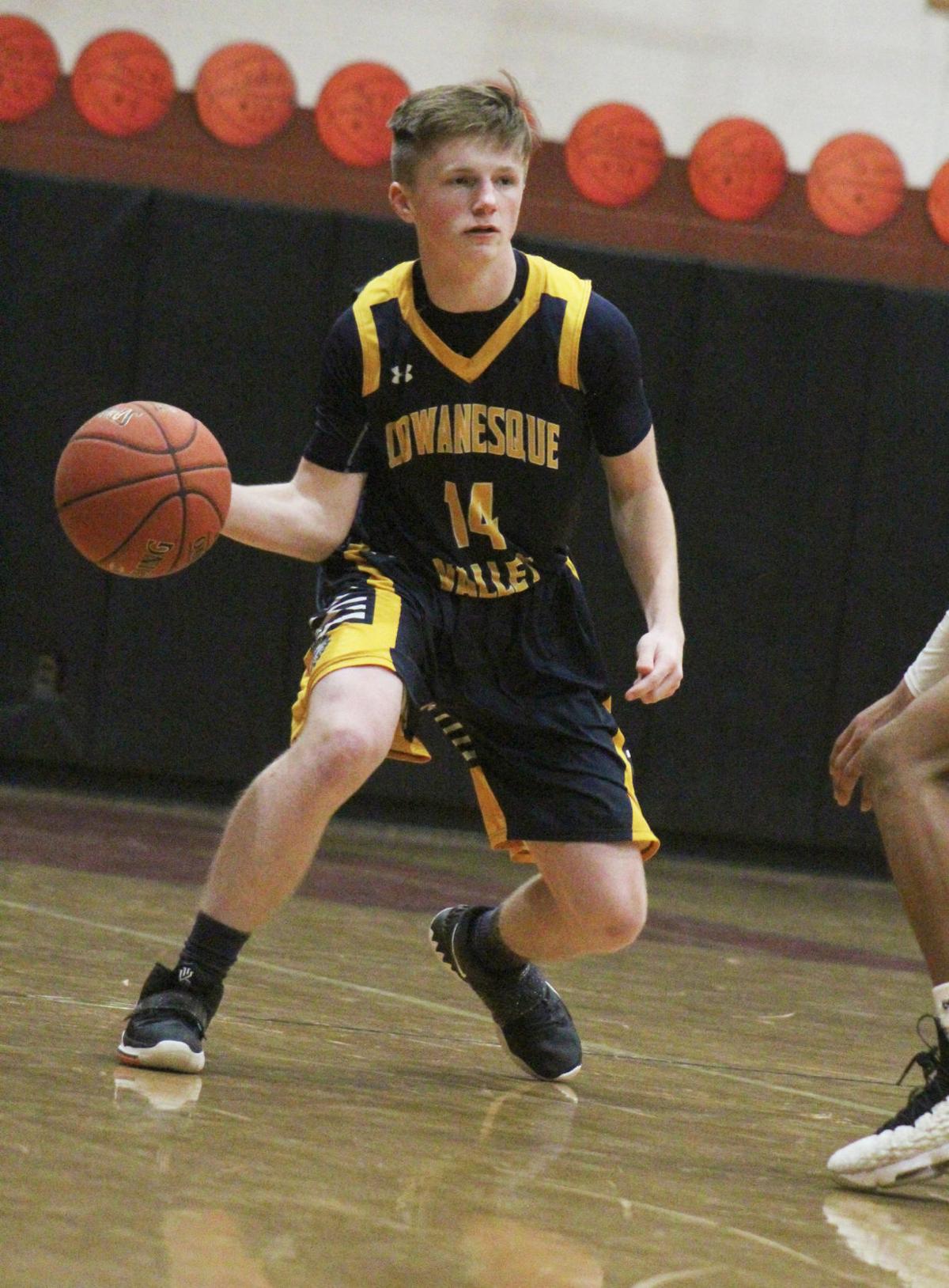 Joe Easton looks to pass during the Indians loss to Liberty during the 2019-2020 season.

Alec Stein looks to drive during the NP-Mansfield Tigers matchup against Wellsboro.

Conner Adams controls the ball during an offensive shootout against St. Johns Neuman.

Freshman Gavin Sykora was named to the Gazette/Free Press Courier Third Team All stars, but the photo was of Noah Schutt in last week’s edition and not Sykora.

Colton Litzelman knocks down a three-pointer during Liberty’s win over Sayre on Saturday, Feb. 1.

Devin O’Dell shoots a baseline jumper against Liberty during their 86-63 loss on Friday, Jan. 17.

Joe Easton looks to pass during the Indians loss to Liberty during the 2019-2020 season.

The Wellsboro/Mansfield Gazette and Free Press-Courier are taking a look at the area boys and girls basketball teams over the next two weeks to give a preseason outlook on the 2021 season, as well as our predictions for where they will stack up in the Northern Tier League.

The projected win-totals listed below are contingent on a full 22-game season being played.

The Wellsboro Hornets basketball team returns all but one starter to their line-up, but with the transferring of Joe Grab it could be much more difficult this season on the offensive end for a Wellsboro team that relied heavily on his production.

Regardless of losing their top-scorer, the pieces that return are more than capable of unleashing a much more balanced-attack than last year, and their experience performing at not only a varsity level but also a high-pressure District Playoff game will most likely pay dividends as they head into the year.

Fans can expect that center Liam Manning becomes a bigger focal-point of the offense and as one of the better big men in the league, he could easily be a player that averages double-digit scoring to go along with double-digit rebounding.

They also return their sophomore point guard Conner Adams who really came alive in the second half of the season and is a shifty and controlled ball-handler who can shoot as well as get to the rim when needed. They will also see returns from juniors Darryn Callahan and Isaac Keane who both shot the ball well last season and both are very tough, high-energy defenders.

There shouldn’t be too much of a drop-off for Wellsboro, and their record will be similar to last season or better, depending on the type of schedule they end up playing.

Wellsboro may not be the top-team in the NTL Large School Division, but they should land somewhere in the top three spots and secure a spot in the District Playoffs.

A team that will look to capitalize on a big returning senior class, the North Penn-Mansfield Tigers could be poised for a dominant 2021 season.

The Tigers graduated three seniors, with the most notable being Logan Tokarz, who was one of the best all-around players in the league as well as the unequivocal leader of their unit.

With a void in the leadership department, it will be important that part of their junior class from last season can step into that role and take the reins on a talented team full of upperclassmen.

Mansfield returns three players who could easily take on the role, with Alex Stein being a player who is a strong ball-handler and a deadly shooter and is also a tenacious defender that might be able to take over that role.

They also return another talented scorer in Dominic Garveric who showed flashes of being a top-scorer with 10 games eclipsing the 10-point mark and two games scoring over 20.

The last senior who may be ready for a leadership-role is Curtis Craig, an imposing and lengthy wing who can shoot from three-point range and also score in the post. Craig averaged 11 points and four rebounds on the year in the 2019-2020 season, and was one of the most consistent players on the roster for the Tigers.

Expect a deep bench and a tough starting lineup under Head Coach Kipper Burleigh that will go toe-to-toe with the best teams in the NTL this season.

The sky’s the limit for this team which also returns a wealth of shooters in a high-octane offense and should be competing for one of the top-spots in the NTL Large School Division.

The North Penn-Liberty Mounties basketball team returns a roster filled with talent in the 2020-2021 season and even without their dynamic shooter Duncan Zeafla, who graduated, they should see little to no drop-off from last season.

Stepping into that starting-role is easily the best sixth man in the league from a season ago in Colton Litzelman, who shot the ball extremely efficiently and is a top-tier defensive player in the entire NTL.

They also return one of the best all-around players in the league in Noah Spencer who led District 4 in assists and also was their top-scorer and their go-to guy in the clutch during their spectacular season.

Also slated on making a return to the starting lineup is Brandon Thompson, the 6’7” center who led all of District 4 in blocks last season and was also a solid shot-maker and finisher in the paint.

The Liberty teams’ youth showed down the stretch and were unable to recapture their early season magic in the NTL Showdown and District/State Playoffs, but the team returning is one that has been there before, and should take the next step in terms of figuring out how to close out games against the best of the best.

Expect Liberty to repeat as NTL Small School Champions this season and be one of the top one or two teams in all of the NTL. If they can keep up their level of play into the playoffs could be in store for a deep playoff-run.

It could be tough sledding this season for the CV Indians basketball team, as they lose three of their top players heading into the 2020-2021 with Seth Huyler, Dustin VanZile and Owen Fitzwater all graduating.

Scoring might come at a premium if they can’t find a go-to player like they had in Huyler, but they also might look drastically different scheme-wise with a new Head Coach Jason Fry taking the helm this season.

Fry has brought in some new faces from Cowansque and, even with losing a lot of players, should be more than replenished in 2021 with a roster of first-year players who are also upperclassmen.

It will also be a team who will look to run in transition and have a lot of strong athletes such as Joe Eason, Devin Gatewood and Tucker St. Peter who was one of the most dynamic players during the 2020 football season with the ball in his hands.

It may be a tough turnaround but the coaching staff and players have completely bought into the new system and could be one of the most surprising teams in the league.

If CV can find continuity early in the year, they could be one of the most exciting teams in the league and also could shock the competition in the NTL Small School Division.

No team lost more key-players than the Williamson Warriors basketball team did to graduation this season, with two of the best scorers in the entire county in Kolby Allen and Carter Strange both gone and leaving a heavy scoring load behind them.

They also lost their third-leading scorer in Brennan Bolt who provided a lot of three-point shots this past season.

With an almost entirely new group looking to take the floor this season it’s hard to say if they will be able to grow fast enough especially with the limited offseason to compete right away in an NTL that may be even better than it was last season.

They will return starter Deven O’Dell, who had a strong year, but it would be foolish to expect him or anyone else to be able to pick up the scoring that Allen and Strange left behind, which was a combined 38 points per game.

It’s hard to know if the Williamson team has any ringers coming up from the junior varsity or junior high level, but if not it might be a rebuilding season as they look to find their identity in their first season without their two most potent-scorers.

The Warriors should win at least three games this season, but they are also a relative unknown in terms of what product will be on the floor this season.

Galeton’s struggles last season were evident, and with a lack of a single win in their 2019-2020 season, it’s hard to imagine things will get better overnight.

They do return a lot of strong athletes including Gavin Sykora, Noah Shutt, Hunter Crowell, Ty Stover and Joseph Brumbach who all could make an immediate impact, but will need to undertake a lot of improvement on both ends of the floor if they want to compete this season.

The Tigers will need one of their seniors to step up and not only be a leader on the floor, but off the floor as well.

Now it’s not to say they won’t get better, but with a nearly non-existent offseason it will be hard to right the ship in this upcoming season.

A strong senior class will be key in helping lead Galeton to at least three wins, but it is going to be grind as they will need to come together as a team without much of an offseason to do so.