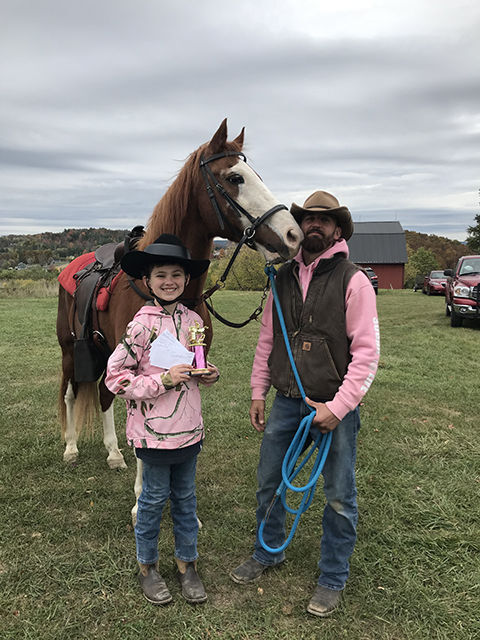 Travis McConnell’s son, Wyatt, 11, shows off a trophy he won riding Sunny during a Wellsboro Riding Club show in October. 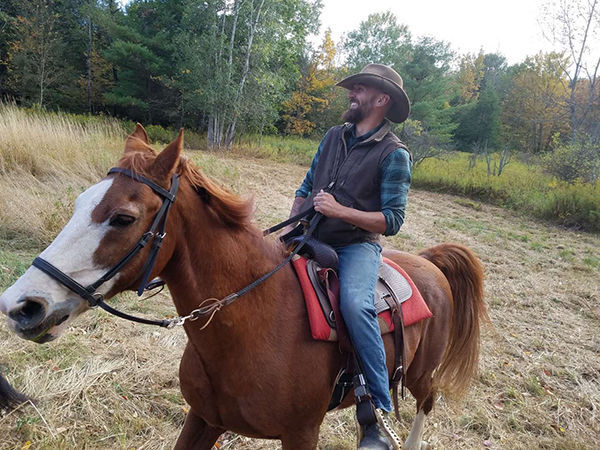 Travis McConnell is all smiles riding Sunny, his newly adopted horse who has helped him cope wit symptoms of PTSD and a traumatic brain injury.

Travis McConnell’s son, Wyatt, 11, shows off a trophy he won riding Sunny during a Wellsboro Riding Club show in October.

Travis McConnell is all smiles riding Sunny, his newly adopted horse who has helped him cope wit symptoms of PTSD and a traumatic brain injury.

Fellow local veterans came through for Travis McConnell when he needed them most.

McConnell, of Wellsboro, lives with post-traumatic stress disorder and a traumatic brain injury he suffered during his first deployment to Iraq with the Marine Corps in 2005.

“I was driving a Humvee in a convoy when my truck was hit with an improvised explosive device and I sustained a head injury from the blast,” he said. “The circumstances during deployment didn’t allow for time off to recover or anything.”

Since then, McConnell has lived with severe migraines and symptoms of PTSD, including depression and anxiety. “It’s just kind of become a way of life. I have good days and bad days,” he said.

In searching for ways to help cope with the bad days, McConnell learned of the benefits of equine therapy. “My grandparents had horses and I rode as a kid,” he said. “I’ve always loved horses, but I just never had the means to have one of my own.”

That changed after McConnell reconnected with Tim Trescott, a Wellsboro resident who spent more than 20 years in the Marine Corps and was McConnell’s mentor when he was enlisting. After he told Trescott of his interest in horses as a way to deal with his symptoms, Trescott, his wife Kelly and their daughter Dawn Dehn started the search for a horse McConnell could call his own.

Dehn posted their intentions to Facebook and a Liberty resident from a military family came through, offering for McConnell to adopt a horse named Sunny free of charge.

“Sunny is such a great horse. We’ve really connected,” said McConnell. “It’s absolutely helped my PTSD and helps me decompress, whether I’m riding or just spending time with him. It’s very relaxing.”

In July, the Trescotts and Dehn organized a benefit show with the Wellsboro Riding Club, raising $2,726 to help McConnell prepare for and care for Sunny. The Trescotts board Sunny at their farm in Wellsboro at no charge and in turn, Travis helps with barn chores.

“Tim had to have surgery recently and he was unable to do chores. It worked out I was able to help out there,” said McConnell. “It was the right time with the right people and everything just fell into place. It’s all about veterans helping veterans.”

Animals have always been an important part of McConnell’s life. “After my last deployment (in 2007), I was up for reenlistment. I saw ‘canine handler’ and jumped on that,” he said.

After training in San Antonio, Texas, McConnell served as a military dog handler in Cherry Point, N.C., for several years. There, he started as a dog handler and worked his way up to kennel master of a team of 13 dogs. McConnell said all of the dogs were trained in detecion of either drugs or bombs as well as patrol, involving finding, pursuing and subduing a person when needed.

“All the dogs were trained in patrol and detection, but only some were used for detection. The dog doesn’t know what it’s finding, whether it’s bombs, drugs or whatever. They just know ‘When I smell this, I get a reward,’” explained McConnell. “So, you’re teaching them to smell an odor and to sit when they find it. You just build up from there with repetition and constant, constant training. My daily life revolved around training and caring for these dogs.”

The dogs, mostly German shepherds, Dutch shepherds and Belgian malinois, were used during military or security operations around the country and in the local community for drug or bomb sweeps. McConnell accompanied dog teams to the United Nations General Assembly and as security detail when President Obama visited North Carolina.

“I’ve always loved animals and loved training and working with the dogs. It was definitely the most fun I had in the Marine Corps. I’d probably still be doing it if it weren’t for the health problems I had from deployment.”

McConnell even gave one of the dogs he worked with a forever home. Dara, an 8-year-old German shepherd who worked as an explosive detection dog, entered an early retirement due to cancer in 2013.

“We only had her five months before she passed away, but she was loved,” said McConnell, adding that he and his family now have four dogs – Baloo, Freya, Tristan and newcomer Rosie – all rescues adopted from local shelters.

‘One of the lucky ones’

McConnell said though his symptoms have worsened over the years, he’s still lucky his injuries he weren’t more extreme. After his first deployment in 2005 when he was injured, he had five months at home on a Marine base in Camp Pendleton, Calif., before starting another seven-month tour in Iraq.

“During that first tour into the second one, I really started developing bad headaches. I didn’t think much of it and just continued doing my job,” he said, adding he completed his second and final deployment to Iraq in 2007. “It’s wasn’t until I was home (in Wellsboro in 2013) and went to the Virginia, where a doctor explained to me what a TBI is and how it comes about, that I realized that’s the reason I’ve been having migraines and trouble concentrating.”

McConnell said that a TBI is generally a series of concussions that aren’t allowed to permanently heal, causing issues such as headaches, dizziness, disorientation, nausea and vomiting and problems with vision and memory.

He said describing PTSD is a bit more difficult because it affects everyone differently, but that his symptoms usually manifest as depression, anxiety and nightmares.

“It’s definitely a real problem that a lot of people deal with. It’s very prevalent with veterans, but it can also affect anyone who has experienced something traumatic,” he said. “But I’m one of the lucky ones. I’m much more fortunate than other veterans who have lost limbs, lost their eyesight or lost their life.”

McConnell retired from the Marines and returned home to Wellsboro in 2013. Though his symptoms have made that adjustment difficult, he said he’s fortunate to have a great support system in friends and family, including wife Noell and son Wyatt, and now, Sunny the horse.

“The biggest thing for people dealing with PTSD need to know is they’re not alone, whether they’re a vet or not,” said McConnell. “There are resources and communities who can help. We have such a great community here that’s willing to stand up and stand behind our veterans.”