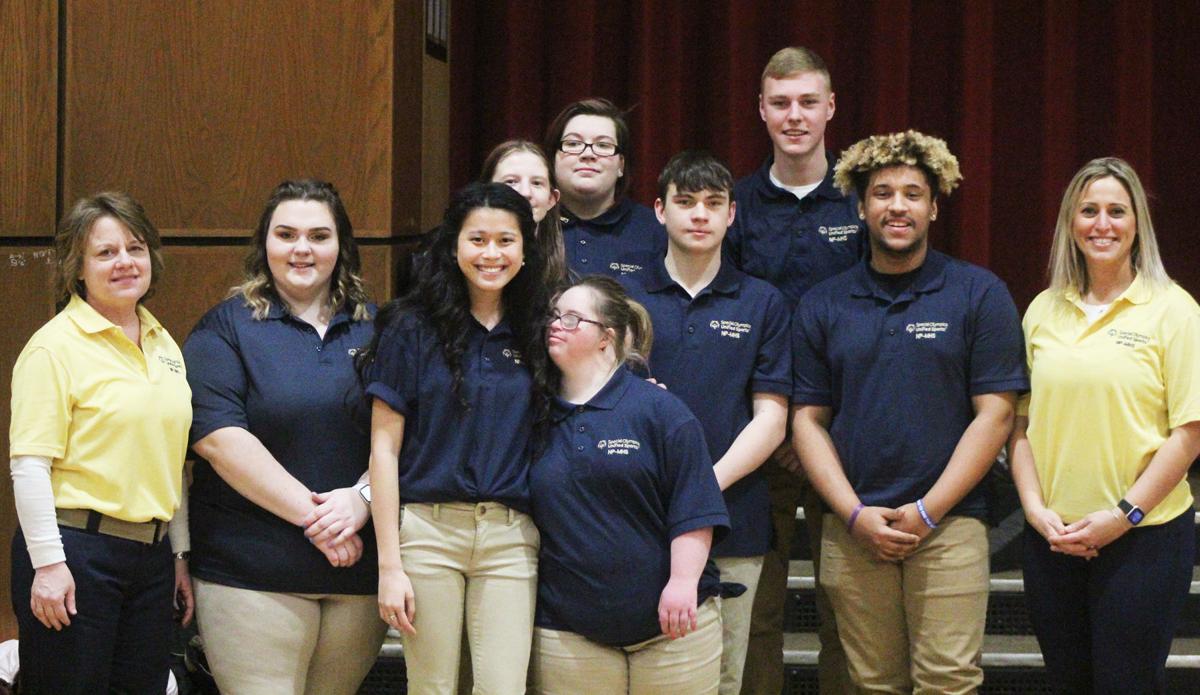 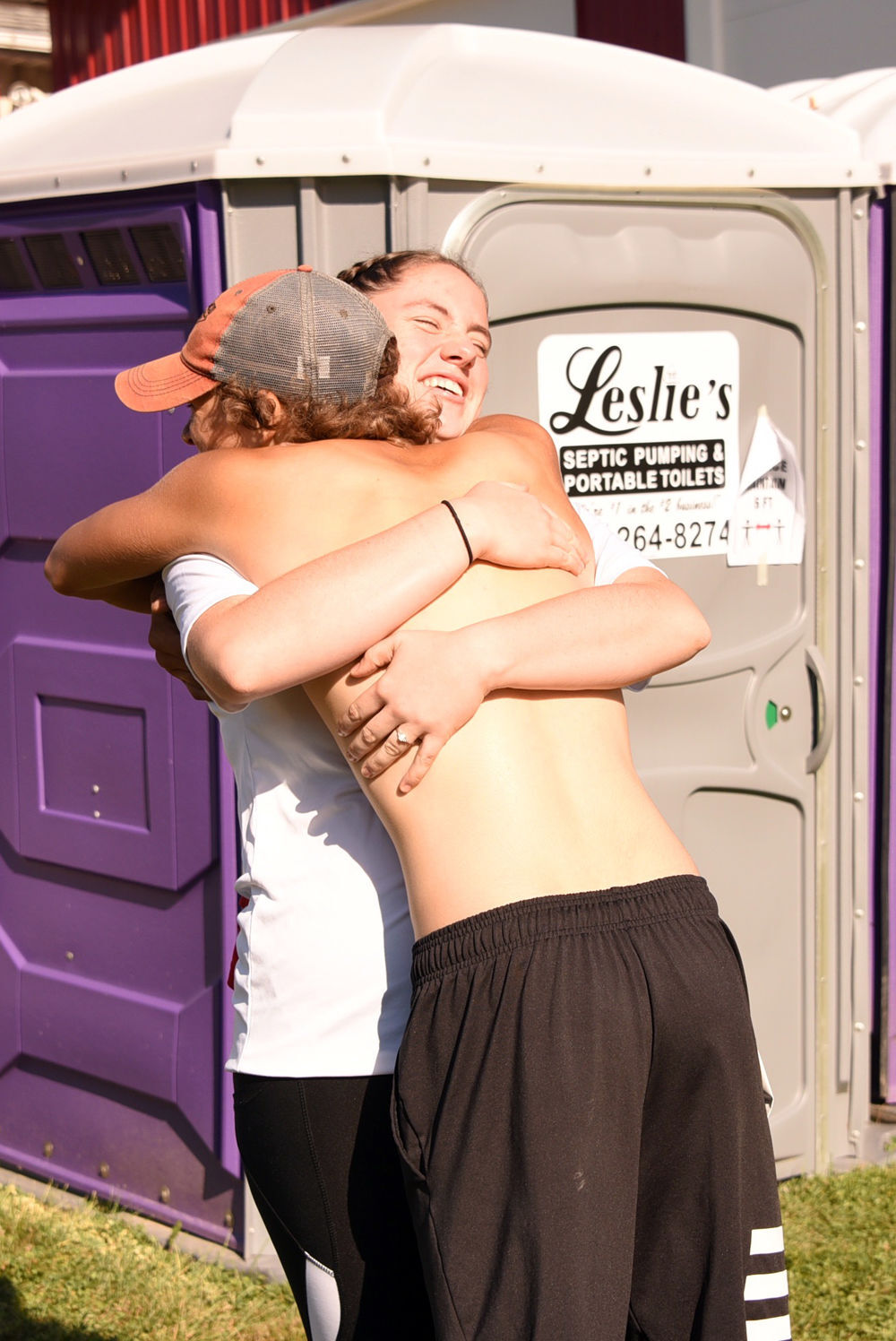 Nathaniel and Micaiah Welch embrace at the finish line of the Tioga Firemen Days 5K. After being away from home for eight months for basic training and tech school, Micaiah returned home to Tioga for a surprise visit. 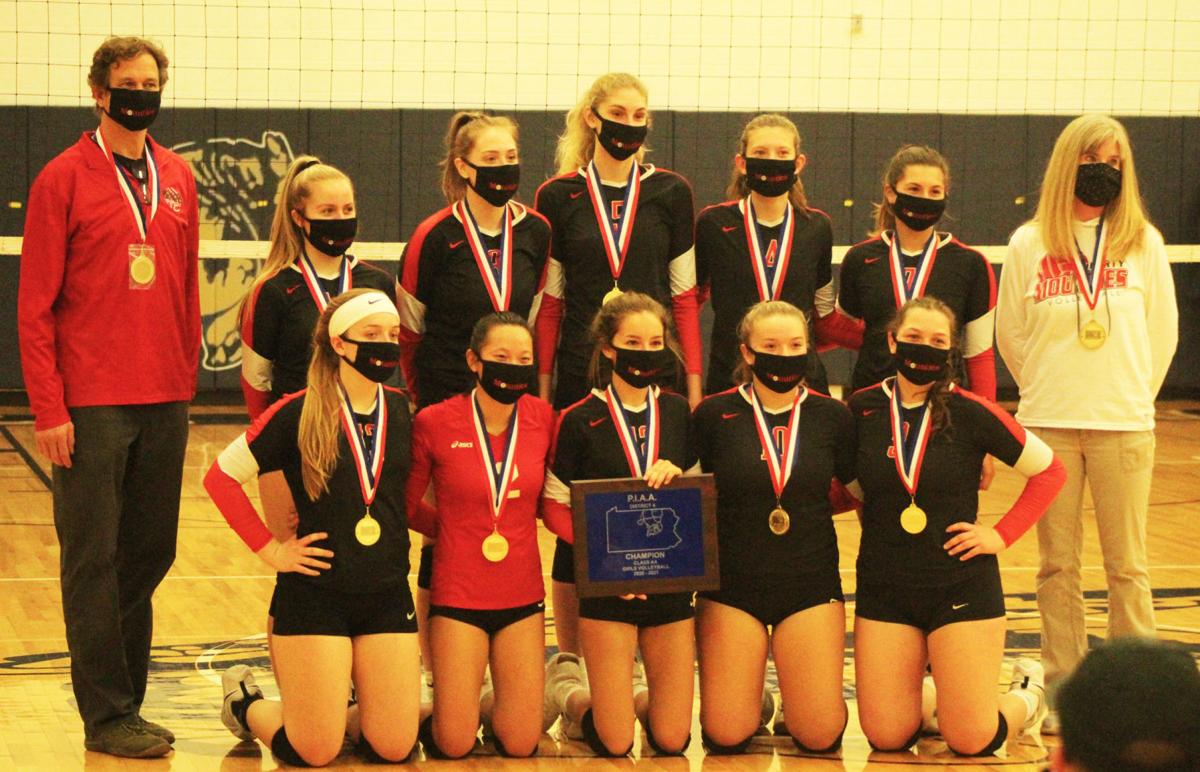 The North Penn-Liberty Lady Mounties display their fifth-consecutive District Title after topping Wellsboro 3-1 in the finals on Thursday, Nov. 5.

Nathaniel and Micaiah Welch embrace at the finish line of the Tioga Firemen Days 5K. After being away from home for eight months for basic training and tech school, Micaiah returned home to Tioga for a surprise visit.

The North Penn-Liberty Lady Mounties display their fifth-consecutive District Title after topping Wellsboro 3-1 in the finals on Thursday, Nov. 5.

In a year of complete uncertainty in the high school sports world, the top story throughout has been the cancellation of the spring sports season as well as the turbulence surrounding the start of fall sports and the pushback of winter sports.

In the opening months of the year, the winter sports championships were canceled exactly a week after the last Tioga County team fell in the State Playoffs (NP-Liberty basketball).

No one could see the disarray that would follow as coronavirus swept through the United States and brought sports, and life, to a halt.

With a few months separating fall and spring sports, people in the community remained hopeful, but in the end schools were closed and sports were shut down heading into the summer months.

After a concentrated effort by the PIAA to make sure fall sports continued, the Gov. Tom Wolfe came out on Aug. 6 that he “strongly recommends” no sports or extracurricular activity until Jan. 1.

With his recommendation, things become less clear on the fate of fall sports, but after another emergency meeting by the PIAA, they gave the greenlight for sports to continue.

After a successful fall season of sports in Tioga County, the winter sports season is still set to begin over the next few weeks even after multiple push backs and new safety precautions that have been implemented such as all athletes need to wear masks when competing.

Welch not only won the 5K with a time of 19:50.94, but was also reunited with his older sibling, Micaiah Welch, an 18-year-old service member who returned home after basic training in San Antonio, Texas.

“I was going to surprise my whole family, but I realized I needed someone to pick me up from the airport,” Micaiah said.

With her parents needing to come pick her up, Micaiah and her family planned a surprise for the young runner.

“I knew something was up, because their anniversary was last month,” Nathaniel said.

The family returned home to Tioga late at night, with Micaiah silently waiting in her room for everyone to leave for the race.

When they did, she made her way to the race to meet her little brother at the finish line.

“It’s kind of weird. It doesn’t feel like I ever left to be honest,” Micaiah said. “It’s the same as it ever was.”

As for Nathaniel, he’s planning to complete high school and try to get a scholarship to run in college. If not, he’ll join the Army.

“His feet are going to pay for his scholarship,” Micaiah said.

In what could be described as the most dominant run in area sports, the North Penn-Liberty volleyball team won their fifth-straight District Championship. This 3-1 battle against Wellsboro capped off another extraordinary season and is the Gazette’s Top Game of the 2020 fall sports season.

Liberty was coming off a long three-week layoff, but were still able to come out and do what they are expected to do, which is win District Titles.

Culture, hard work and dedication has been the calling card of the North Penn-Liberty Lady Mounties’ success over the years.

With yet another win in the District Finals, it’s safe to say that what has been built by this program isn’t something easily duplicated. It’s taken having complete buy-in from coaches and players throughout this historic run.

“I am not sure that there is any secret formula other than dedication,” Head Coach Jennifer Nawri said. “Most of the girls in our program play volleyball year-round, also playing for various clubs in the area. I think that extra time on the court and extra experience is very helpful in building talented, experienced teams.”

In what could have been a major upset with the circumstances heading in majorly favoring the Lady Hornets, Liberty displayed their championship mentality.

Wellsboro knocked on the door in nearly every set, but Liberty found a way to stifle their runs on their way to a 3-1 win.

The Southern Tioga School District was closed for the week heading into the game, meaning the Liberty girls had a 13-day layoff between their final regular season game and the championship, as well only one practice in the week leading into the game. Despite this, they came ready to play on the biggest stage of the season so far.

“We were fortunate to get into the gym on Wednesday, so I think that really helped,” Nawri said. “But ultimately, the team was ready to play and a few days off wasn’t going to change that. I am so proud of how they stepped up, despite just one practice before the final.”

Liberty was able to rally and despite Wellsboro pulling the set-score to 1-1, won their final two sets of the evening to claim the District Title.

Even with lack of practice, Liberty proved to be a dynasty in area volleyball and dominated for their fifth-straight season.

The Lady Mounties didn’t get the opportunity to make another run for a State Title, but still have put together another amazing season where they claimed their fifth consecutive District Four 2A Championship.

The North-Penn Mansfield team was able to take the top spot during the competition, and the team of Rose Young, Mary Minnich, David Moore, Brandy Hulbert, Taylor Turner, Reece White, Matthea Mitchell and Elijah Cruz will be moving on to the state competition in Hershey.

In their match against Liberty, Mansfield was able to make a comeback after falling behind 1-0 in the first round. Mansfield ended their game scoring five points to Liberty’s one to give them a spot in the finals against the Canton White team who they beat to take home first place.

The hosting North Penn-Liberty team was able to grab a fourth place finish and the team of Dutch Litzelman, Chase Person, Timothy Young, Jacob Bergstron, Shaelynn Mosher and Karrigan Weber were able to take a first-round win over the Canton Red team, but were unable to top Athens for third place.

In their first round matchup, the Liberty team rallied back from down 2-0 with 12 minutes remaining behind a huge third round performance.

Liberty took a 4-2 lead heading into the fourth and ended up securing a first round win of 7-3 over the Canton Red team.