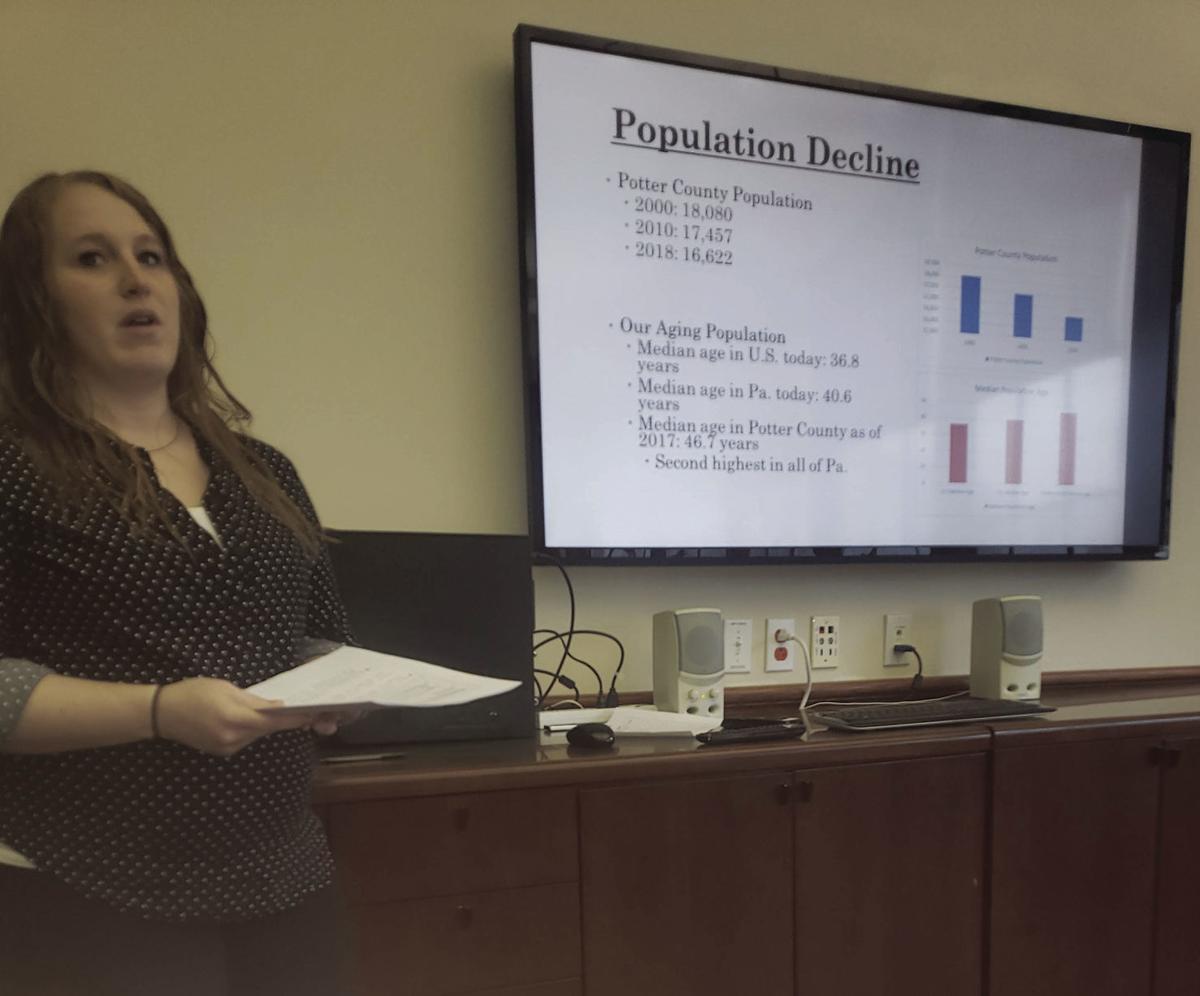 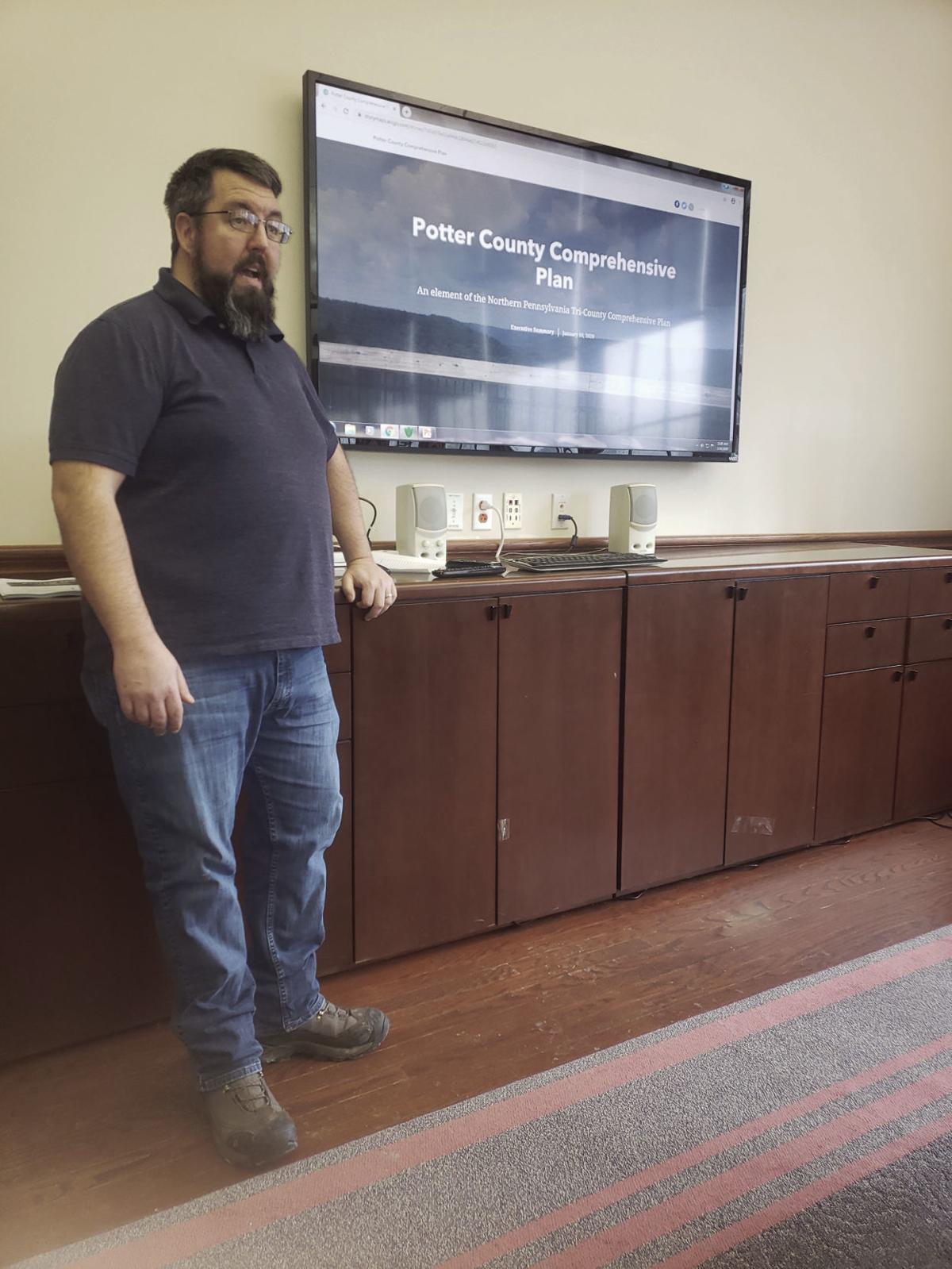 COUDERSPORT — An element of the 10-year comprehensive plan, approved by the Potter County commissioners in December, is a five-year-plan to hinder, if not reverse, population decline.

Project 2025, presented at the Jan. 16 commissioners meeting, is a plan implemented to slow the “alarming population decline, including ‘brain drain,’ encourage community participation and make community pride a top priority, promote migration to Potter County and (promote) positive community change (as well as) remove the sigma ‘because we’ve always done it this way’ (from the community mindset,” Ellen Russell, county director of community development said, as part of her presentation.

After Will Hunt, county planning commission GIS/planning director, introduced the interactive comprehensive plan website to the commissioners and meeting participants, Russell shared a slew of statistics regarding population and results from a local survey.

According to Russell, 686 Potter County residents were surveyed with questions such as what types of jobs they are seeking, as well as what they would like to see their tax dollars used, what improvements they think the county needs, how they feel about career paths for youth and about the available amenities (shopping, restaurants, etc.) in the county and why they chose Potter County in the first place.

Of the 686 surveyed, 86 students answered a specific question for their demographic; 9% stated they planned to stay or return to Potter County after graduating high school and approximately 52% weren’t sure either way. The number one reason the remaining 38% of the students said they would not stay or return is because of the inability to find good-paying jobs in their chosen career field. Additionally, Russell said enrollment in Potter County schools declined 5.1% between 2014 and 2017.

Russell said the data from the survey suggested officials and community leaders could pursue promoting trade jobs, encouraging enrollment in the Northern Pennsylvania Regional College and engage residents to be more active in the county. One way residents could take a more active role is participating in the 2020 census; Russell said that each resident equates $21,000 in funding per 10-year census period.

The presentation concluded with the adage “Rome wasn’t built in a day, but they worked on it every single day.”

The next step for the project is collecting more data, including surveying students at the next Potter County Education Council career and job fair.

“We have good data, but we don’t have enough data,” Russell said.

Russell told the Potter Leader-Enterprise a tentative plan of action, based on the data gathered, should be ready by the end of July.

Commissioner Paul Heimel commended Russell and Hunt on their efforts and encouraged everybody to consider the project.

“We all have our reasons that we stay here,” Heimel said. “We need to share our stories with others.”

Heimel said the ultimate goal of the project is to show an arrest of the population decline in the interim census report, if not show a reversal of it.

Following the project presentation, each commissioner gave a brief statement about their first few weeks in office, in lieu of their reports. Heimel extended warm greetings and welcome newcomers Nancy Grupp and Barry Hayman.

“We’re definitely not a board doing business as usual,” Grupp said.

“Teaching government is a little bit different than serving in it,” Hayman said.

The next meeting is scheduled for Jan. 30.

Other items on the Jan. 16 agenda included:

COUDERSPORT — Noting how much time, effort and community input was put into creating the county’s comprehensive plan, Potter County Commission…

Some sun in the morning with increasing clouds during the afternoon. High around 50F. Winds ENE at 5 to 10 mph.

Photos from the Oct. 1 paper are ready for viewing

Photos from the Sept. 24 papers are ready for viewing

Photos from the Sept. 17 newspapers are ready for viewing