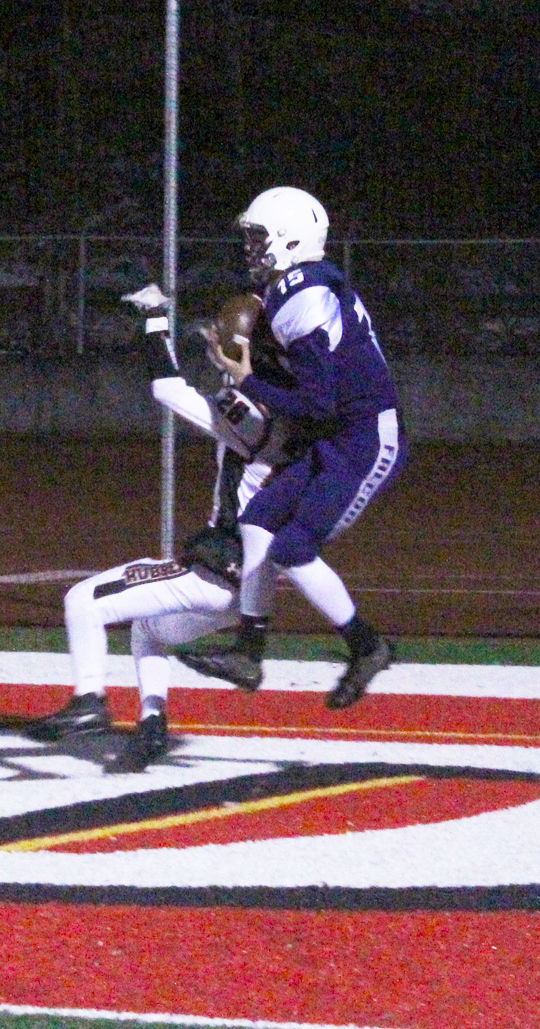 BRADFORD — The undefeated Coudersport Falcons traveled to Bradford for their first district playoff action against the Smethport Hubbers in a rematch from earlier in the season.

The Falcons were without their starting running back as well as one of their best defensive players in Travis Gleason, but were able to overcome being short-handed and defeat Smethport 35-6 in convincing fashion.

Coudersport has been unbelievable on the defensive side of the ball only allowing 26 points in the regular season, and even without Gleason they were able to smother the Smethport offense throughout the night.

The first half saw the Falcons struggle a bit on the offensive side of the ball, but they were able to overcome a few stumbles in the run game early behind some stellar plays from John Minor, who eventually went over the top of a Smethport defender and pulled down a tough grab to give the Falcons their first lead of the night. They failed to convert on the two-point conversion and took a 6-0 lead early.

Smethport came back on a long drive highlighted by a spectacular catch on the sideline and were able to cap off their drive with a 4-yard touchdown run by Braeden Johnson, but from that point on Coudersport defense controlled the line of scrimmage until the final buzzer.

In the second quarter of actions, both teams traded possessions early as neither offensive produced much on a cold night, then the Falcons nabbed an interception with a long return by Daniel Frame before halftime, and scored on a one-yard run by Keck with only 30 seconds remaining in the half to give them a 12-6 lead and some much needed momentum going into the next half of play.

Coudersport came out with a new energy in the second half, and were able to get their high-octane run offense rolling early and often. On the opening possesion, runningback Brandy Kightlinger dashed through the Smethport defense en route to a 62-yard touchdown run and lifted Coudersport to a 20-6 lead after converting the two-point conversion.

Quarterback Keck was able to do the rest for the Falcons, scoring on two long touchdown runs, one of 46 and another for 22 yards in the third and fourth quarter in order to give Coudersport a 36-6 lead and close out the game with yet another win.

After a slow start, the Falcons were able to get things rolling in the second half behind the legs of Keck and Kightlinger, who accounted for three second half touchdowns.

Defensively the Coudersport Falcons overcame a rocky start to completely dominate Smethport from the second quarter forward. The Falcons held Smethport to negative yardage running the football, as well as allowing only six first downs. The Falcons also had four tackles for loss, including two sacks on the night. Logan Rogers led the way in the absence of Gleason, and had a stellar performance from his linebacker position coming up with 10 tackles, two tackles for loss and a sack on the defensive end for Coudersport.

With the win, Coudersport now will have a chance to claim the district title for the second consecutive season. They will have a rematch against the Redbank Valley Bulldog team who they stomped by a score of 56-0. The game will be Nov. 15 at 7 p.m.

Mainly cloudy with snow showers around before midnight. Some sleet may mix in. Low 24F. Winds W at 5 to 10 mph. Chance of snow 50%.