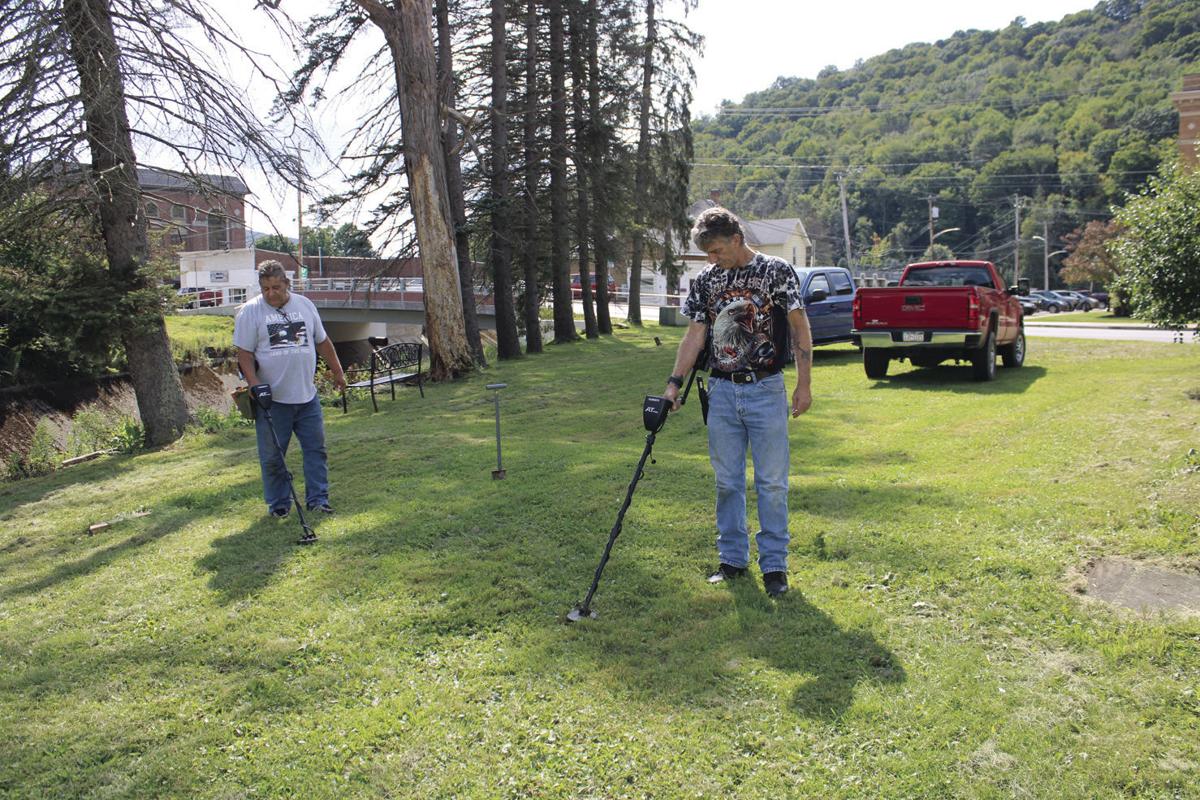 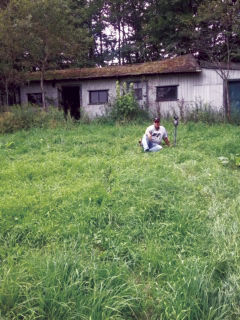 Scott Michels sits in front of an old migrant camp off of Route 6 they metal detected around. 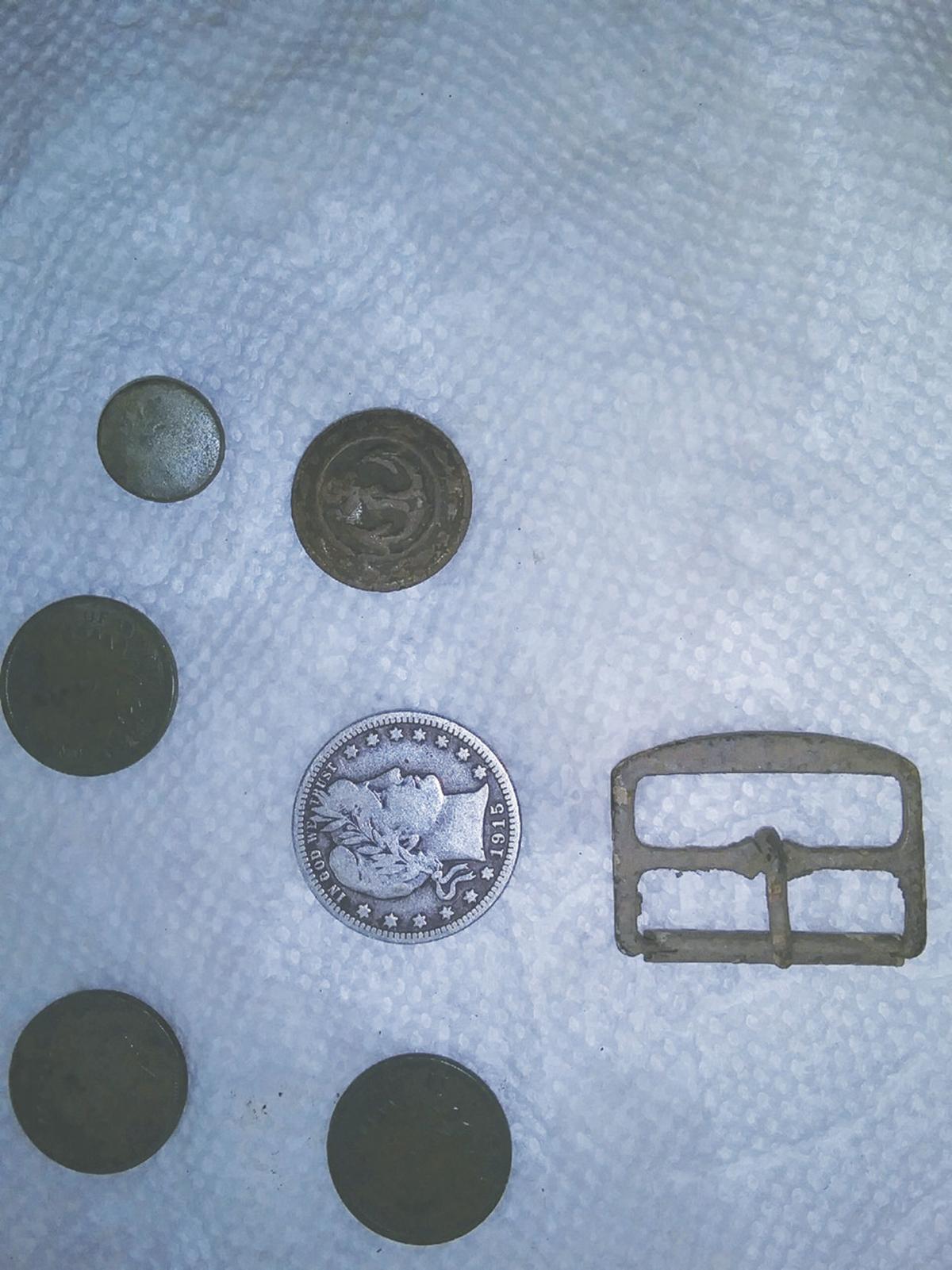 Some coins found near the old migrant camp. 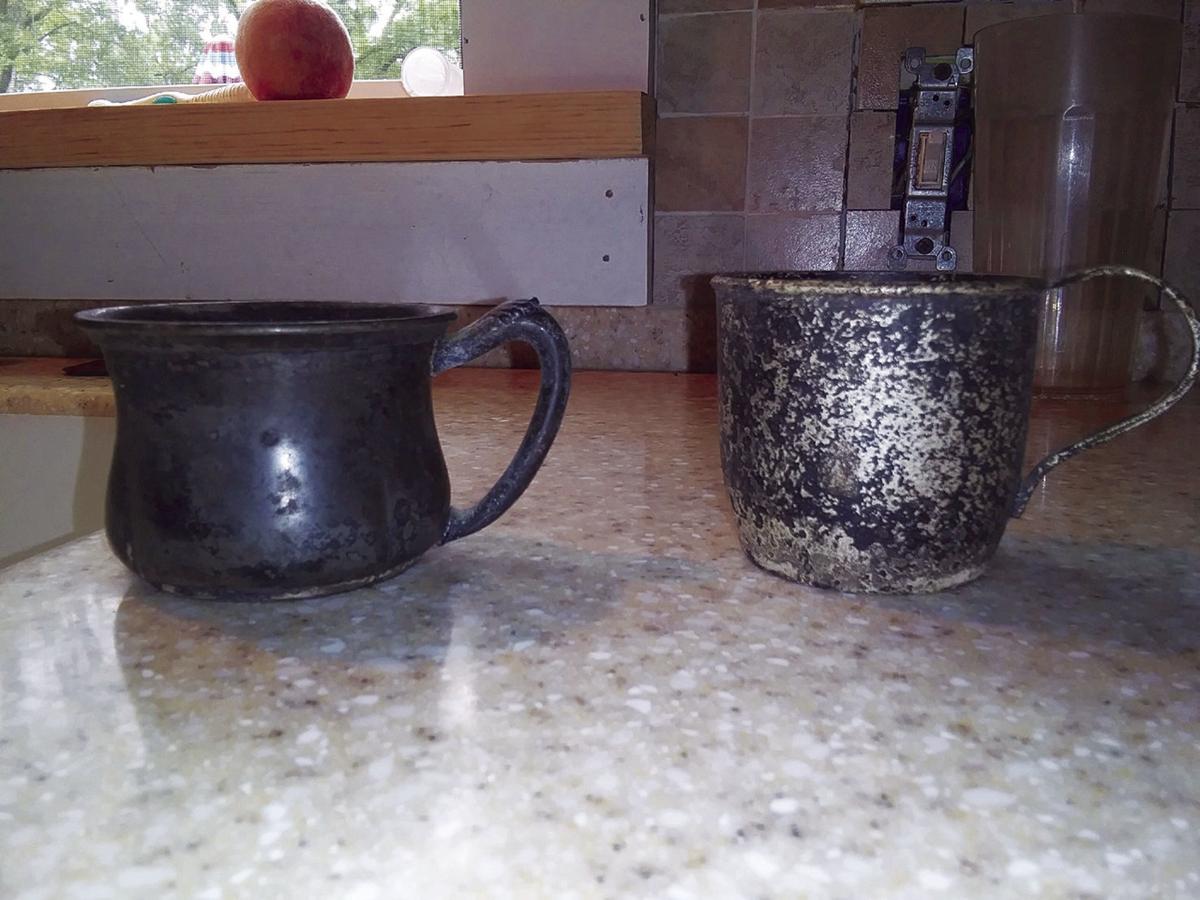 Drinking cups from the 1800s found near the old migrant camp. Scott Michels and Timothy Schubmehl found them by metal detecting. 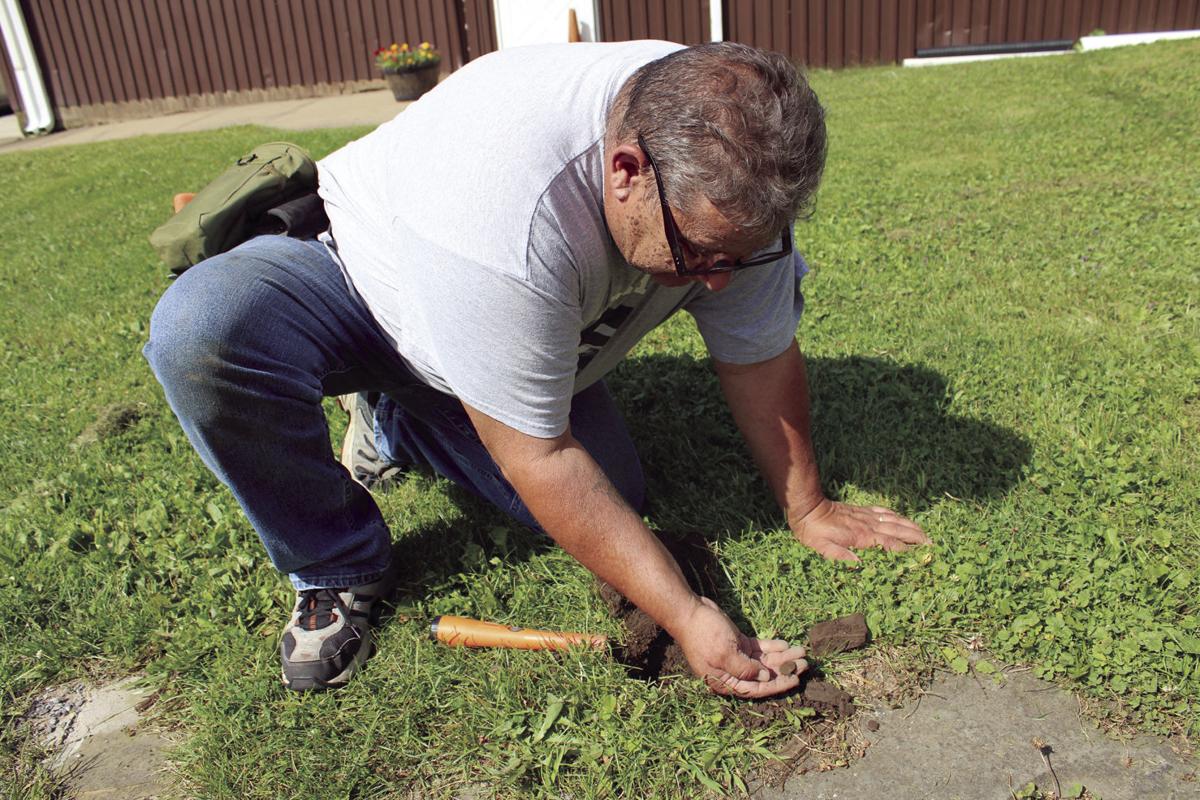 Scott Michels finds a 1970s penny by metal detecing in front of Old Hickory, along Main Street in Coudersport. 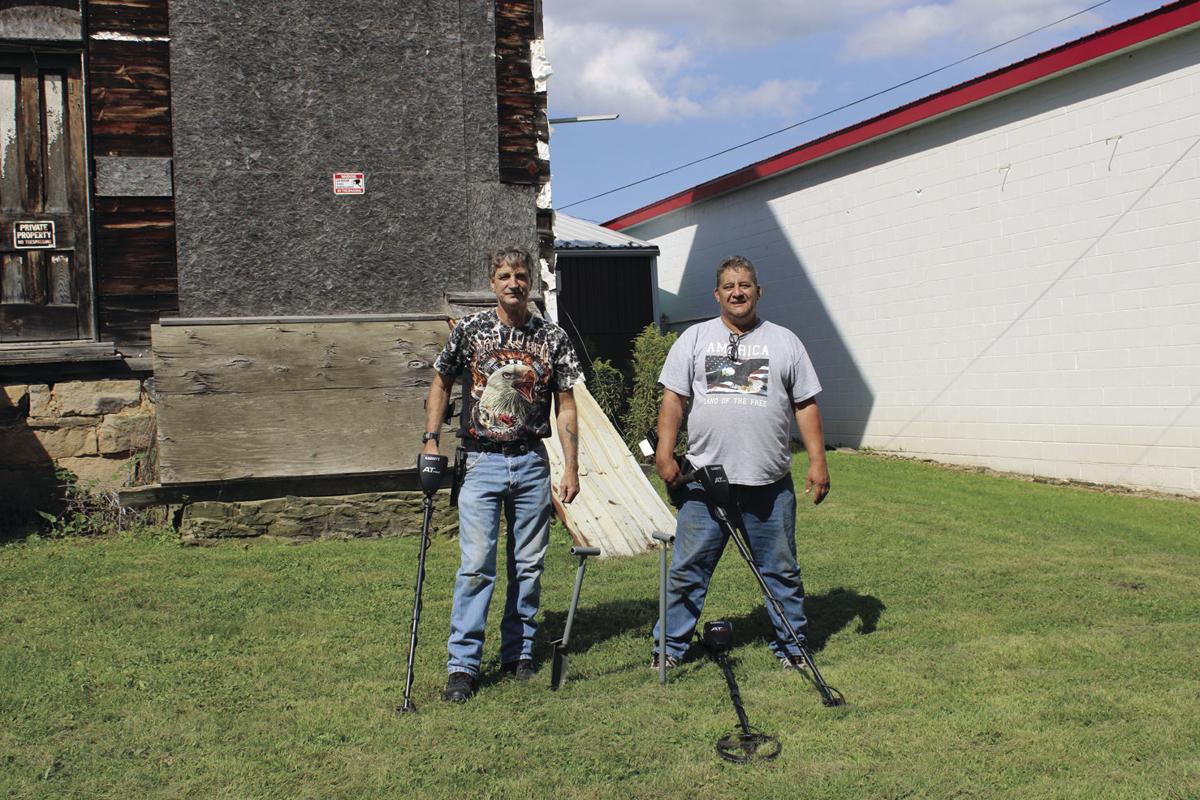 Scott Michels and Timothy Schubmehl have been friends for 40 years. They spent time metal detecting in Coudersport last week. 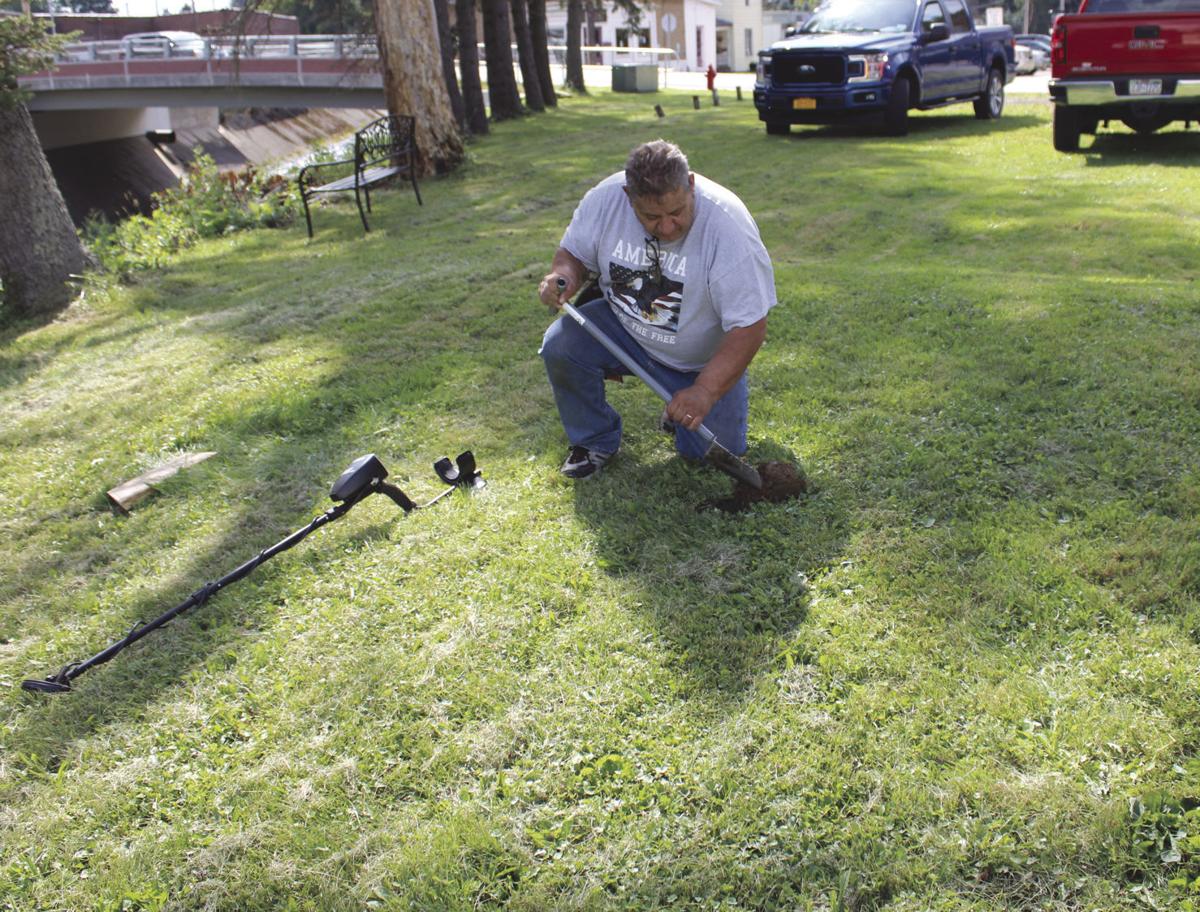 Scott Michels digs a hole after his metal detector went off.

Scott Michels sits in front of an old migrant camp off of Route 6 they metal detected around.

Some coins found near the old migrant camp.

Drinking cups from the 1800s found near the old migrant camp. Scott Michels and Timothy Schubmehl found them by metal detecting.

Scott Michels finds a 1970s penny by metal detecing in front of Old Hickory, along Main Street in Coudersport.

Scott Michels and Timothy Schubmehl have been friends for 40 years. They spent time metal detecting in Coudersport last week.

Scott Michels digs a hole after his metal detector went off.

After a few missed calls and emails, the two friends, Scott Michels and Timothy Schubmehl, showed up at the house and asked one of the owners, who was working outside, if they could spend some time metal detecting around the property. They were granted the permission they were hoping for and began detecting.

“This is a unique area in the state with a unique history,” Michels said. “I want to recover as many artifacts as I can to educate the community on the local history.”

Michels has been metal detecting for 25 years. He lives in Scottsville, N.Y. but has spent a lot of time in Potter County ATV riding. Once he and Schubmel, who have been friends for 40 years, got settled at Old Hickory, they showed the Potter Leader-Enterprise all the artifacts they had already found in about 30 minutes.

At one point, there was a carriage house on the property, Michels said. In that area, he found a bracket or a hinge that was probably used to hang saddles or something similar on.

He also found a cast iron window weight from the 1800s.

While detecting, the two have to pay attention to the noises their detectors are making. Just because it’s beeping doesn’t always mean they’ve found something interesting. It could be picking up wires, gas lines or just a piece of junk.

Walkways and sidewalks are hot spots for coins, Michels said. While people are fumbling around in their pockets trying to locate their keys before getting to their front door, they might drop a coin and not notice it. As people or animals walk over it, it gets pushed deeper and deeper into the ground.

Michels found a coin about six inches deep in the ground from the 1970s.

“You’d be surprised on how much stuff is in the ground,” Michels said. He once found an Indian head penny from 1809.

Schubmehl is a little newer to the metal detecting world, he’s been at it for six months. He said he enjoys preserving history and does it to do some good in the world.

Schubmehl’s finds from other areas include a lantern head from 1860, which he found to still work after he cleaned it.

The two use Garrett AT pro metal detectors. It can detect things 10 inches down. Once the detector goes off, they’ll dig a small hole. They have a pin pointer that can locate where the item is once they start digging. It provides some guidance so they’re not digging aimlessly.

Even if they do find junk, they still take it out of the land. It’s a safety measure, because this way it won’t come up during a freeze or get hit by a lawn mower. Michels said those metal detecting should always wear protective gloves to avoid getting cut.

“You’ll find a lot of junk. When you find a coin or something, it’s great, but you’ll mostly find junk,” Schubmehl said.

After they finished up at Old Hickory, they went on an ATV ride. During their ride, they came across an old migrant camp in a field off of Farm Road, across from the site of the former Potato City Inn.

The owners let them do some metal detecting there and Michels said he found a military button from between 1747-1787. He said the owners had a migrant camp between the 1920s and 1960s and many of the coins they found were from that time period. They also found drinking cups from the 1880s.

Michels and Schubmehl said they always give the property owners any artifacts they uncover.

Michels hopes more younger people get into metal detecting and he’d like to see families do it together.

“I want to see kids get involved in other things than video games,” Michels said. One kid metal detecting is one less kid sitting on a couch.

Metal detecting can require some planning, though. Michels suggested people who are metal detecting do their homework on the local history by talking to historians, looking at old maps of the area and talking to landowners.Michels and Schubmehl hope to return next year to do some more metal detecting. Michels said they were invited back to Old Hickory; the owner wants them to metal detect the basement.

Photos from the April 8 papers are now online

Photos from the April 1 edition are now online

Photos from the March 18 newspapers are now online!