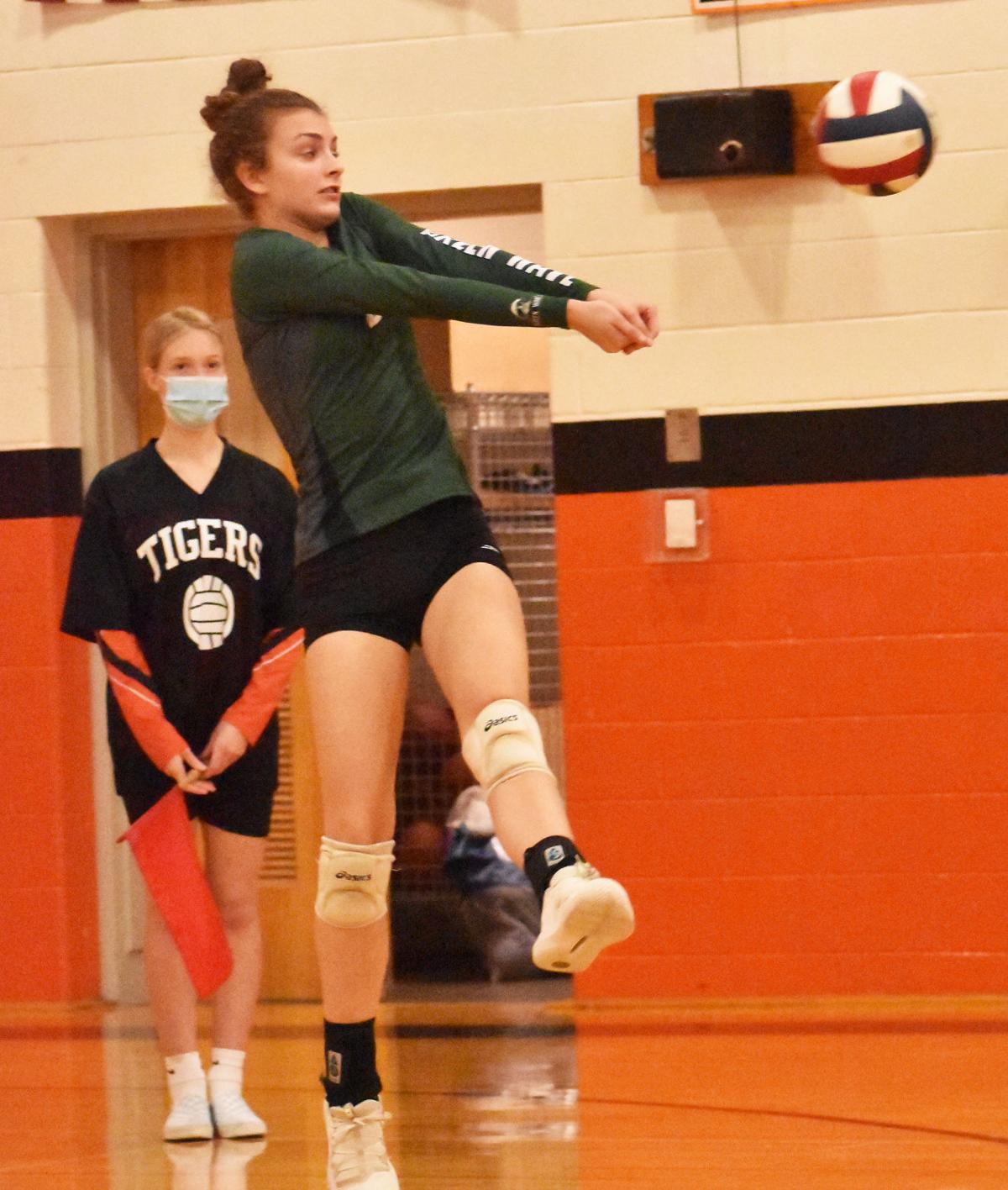 OV’s Avaree Kellert makes a jumping dig during their win over Galeton on Wednesday, Oct. 13. 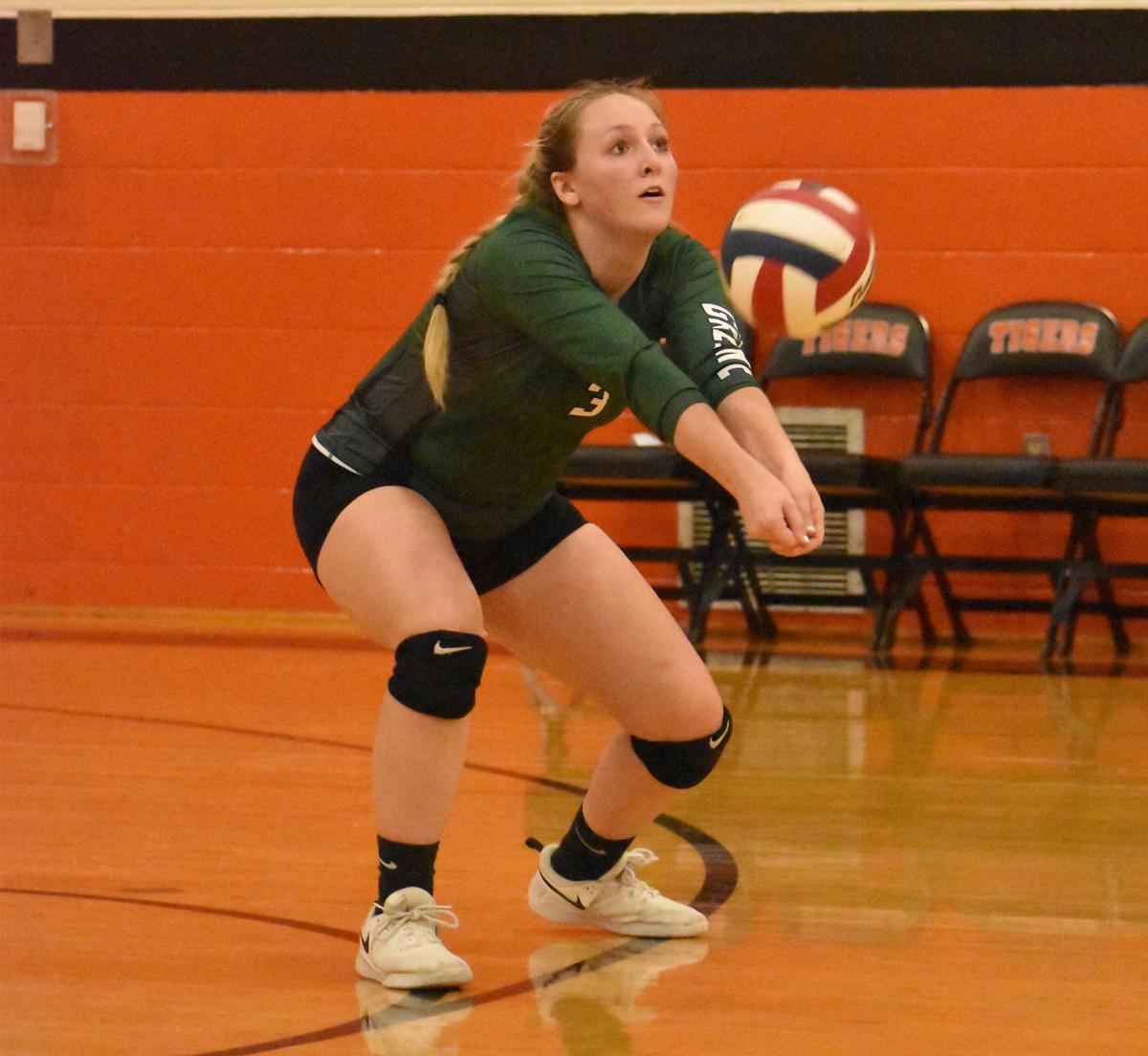 Junior OV outside hitter Jadyn Brabham records a dig during their win over Galeton on Wednesday, Oct. 13. 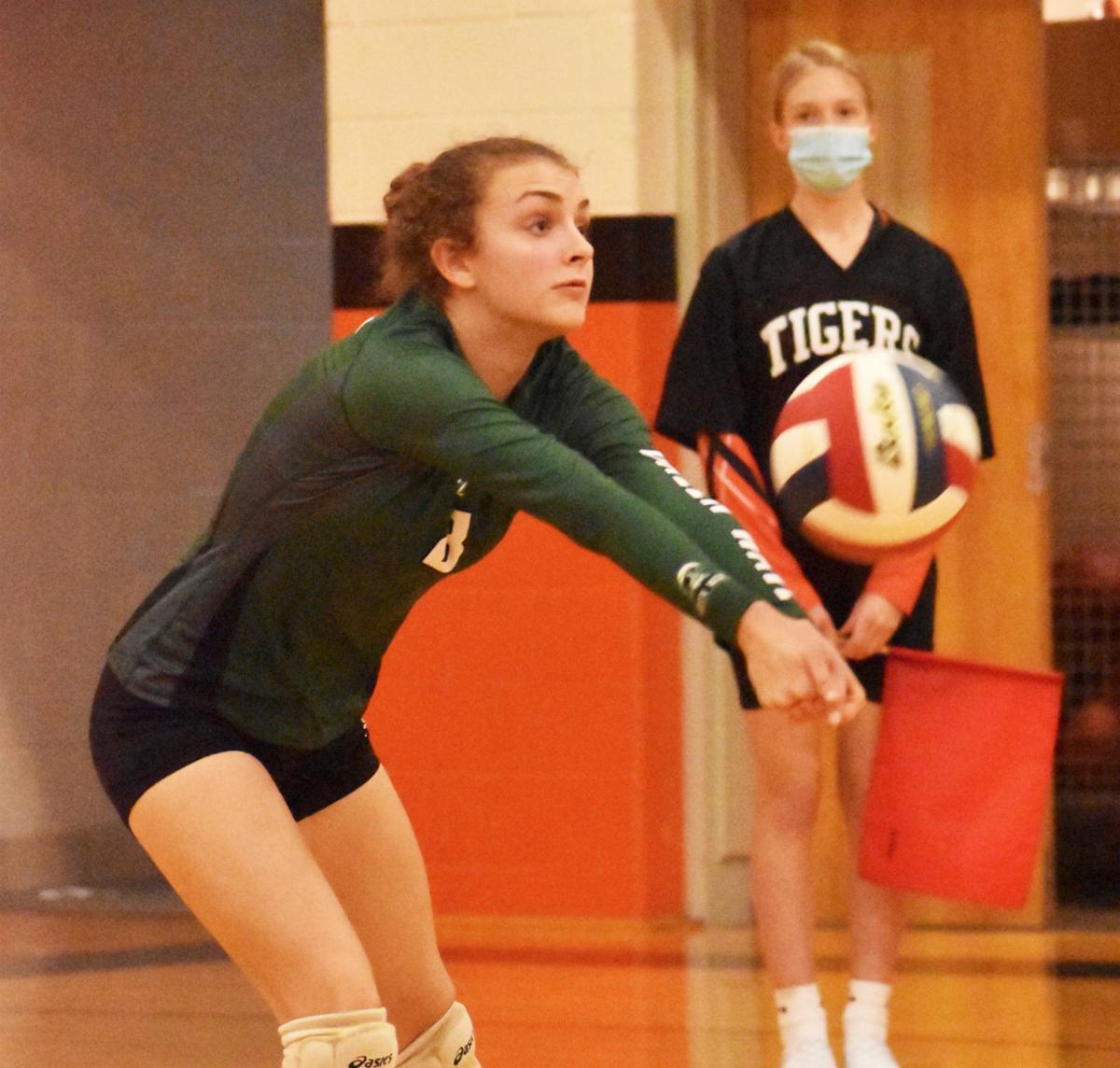 OV’s Avaree Kellert records a dig during their win over Galeton on Wednesday, Oct. 13. 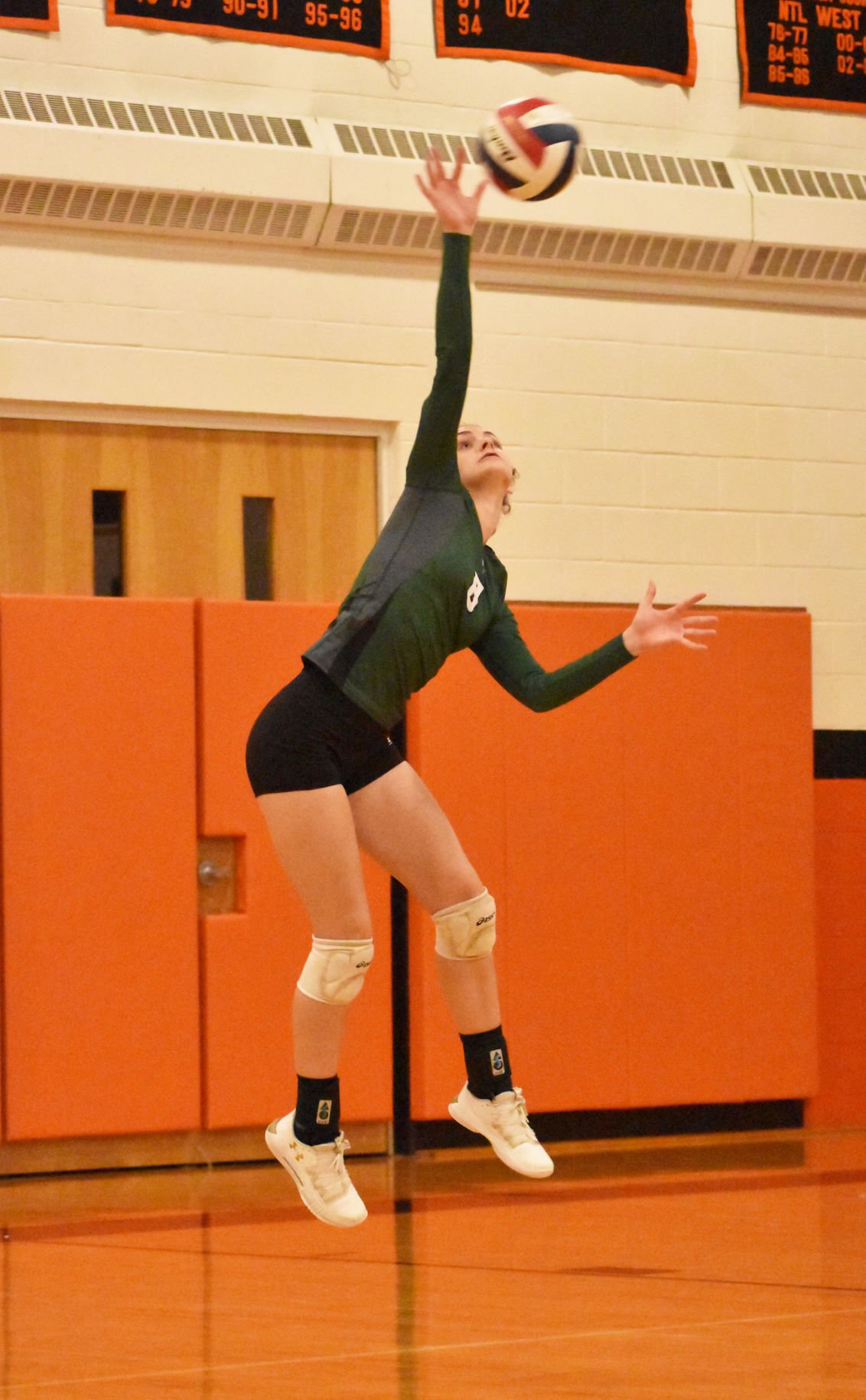 OV’s Avaree Kellert serves the ball during their victory over Galeton on the road on Wednesday, Oct. 13. 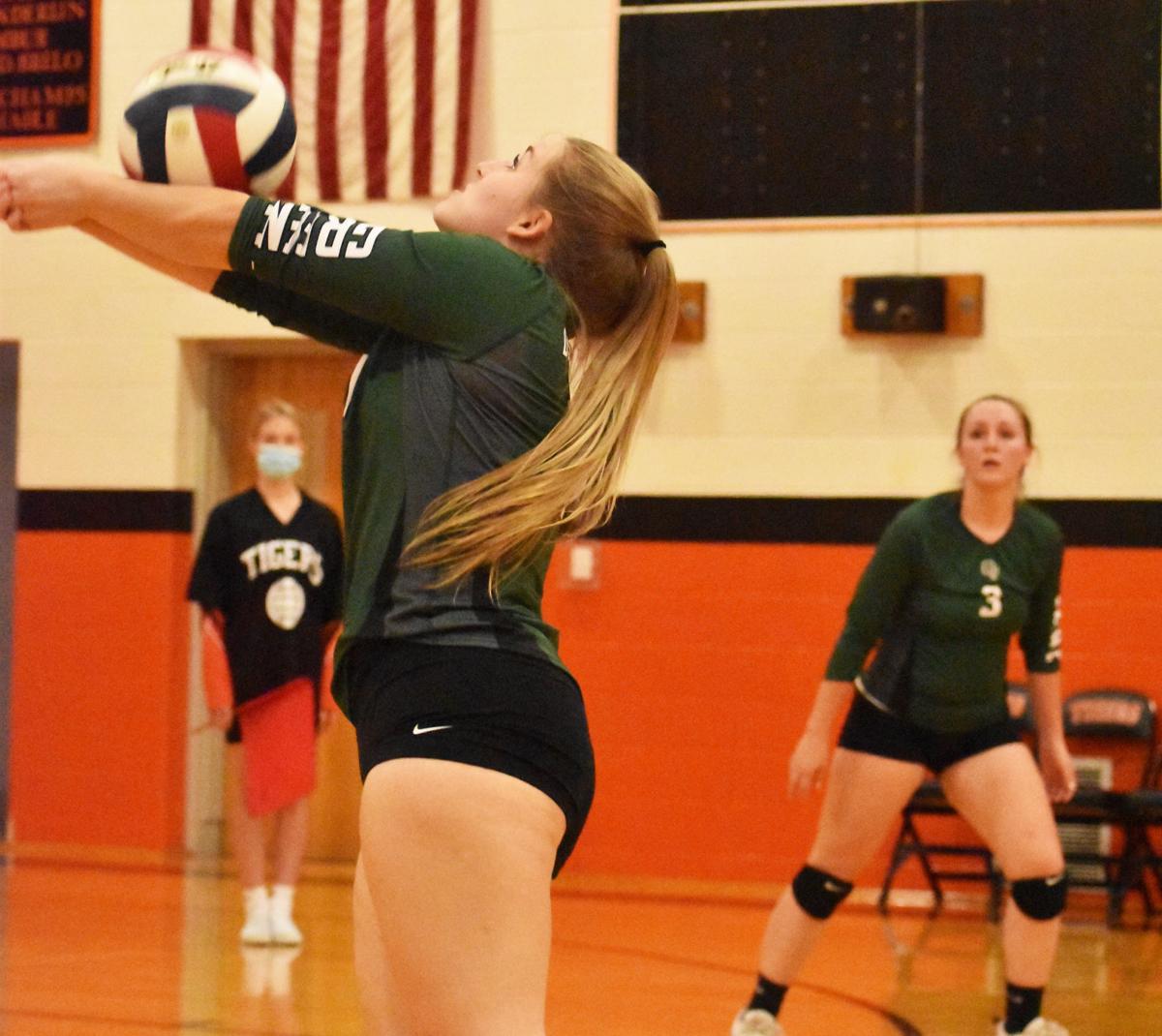 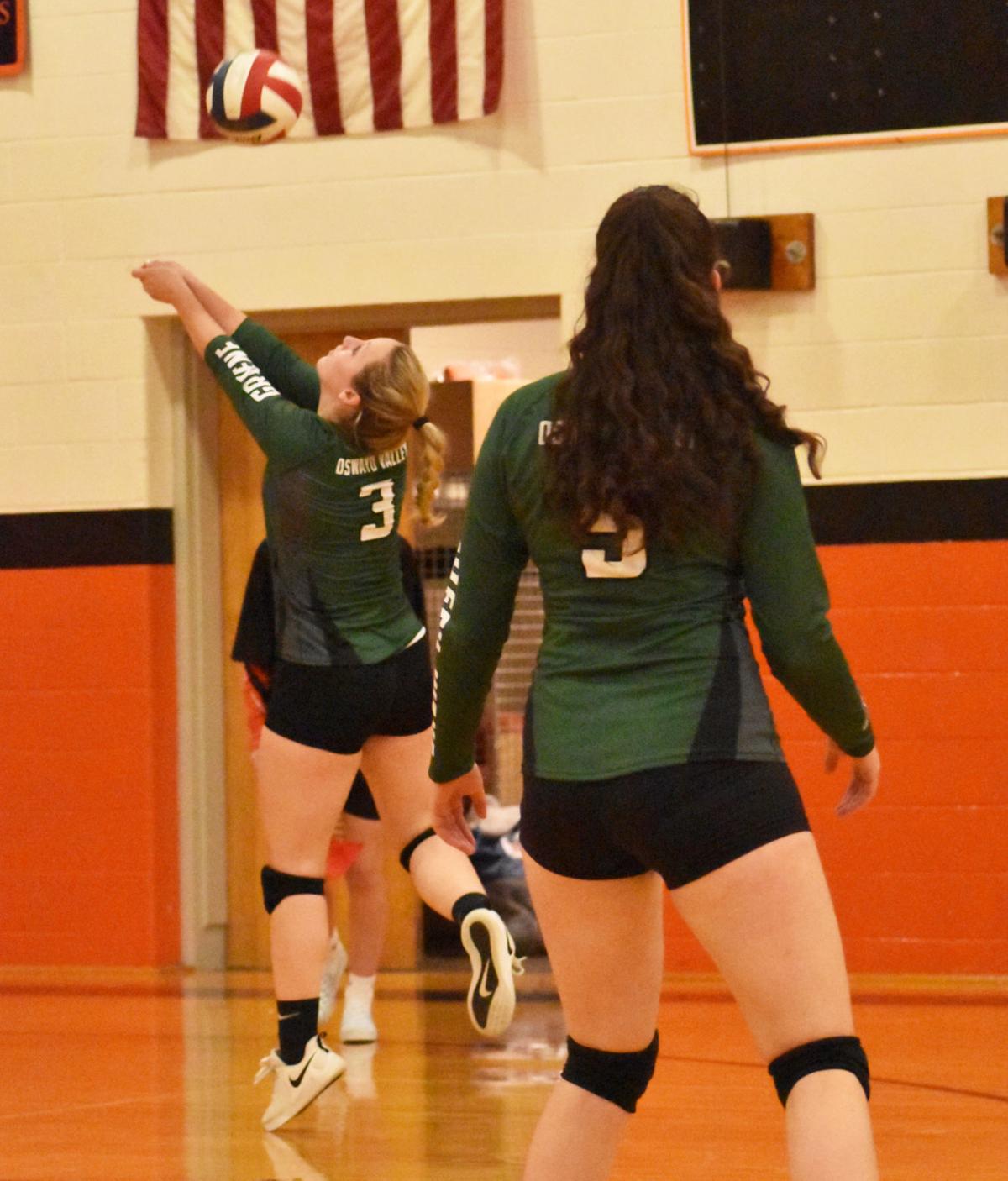 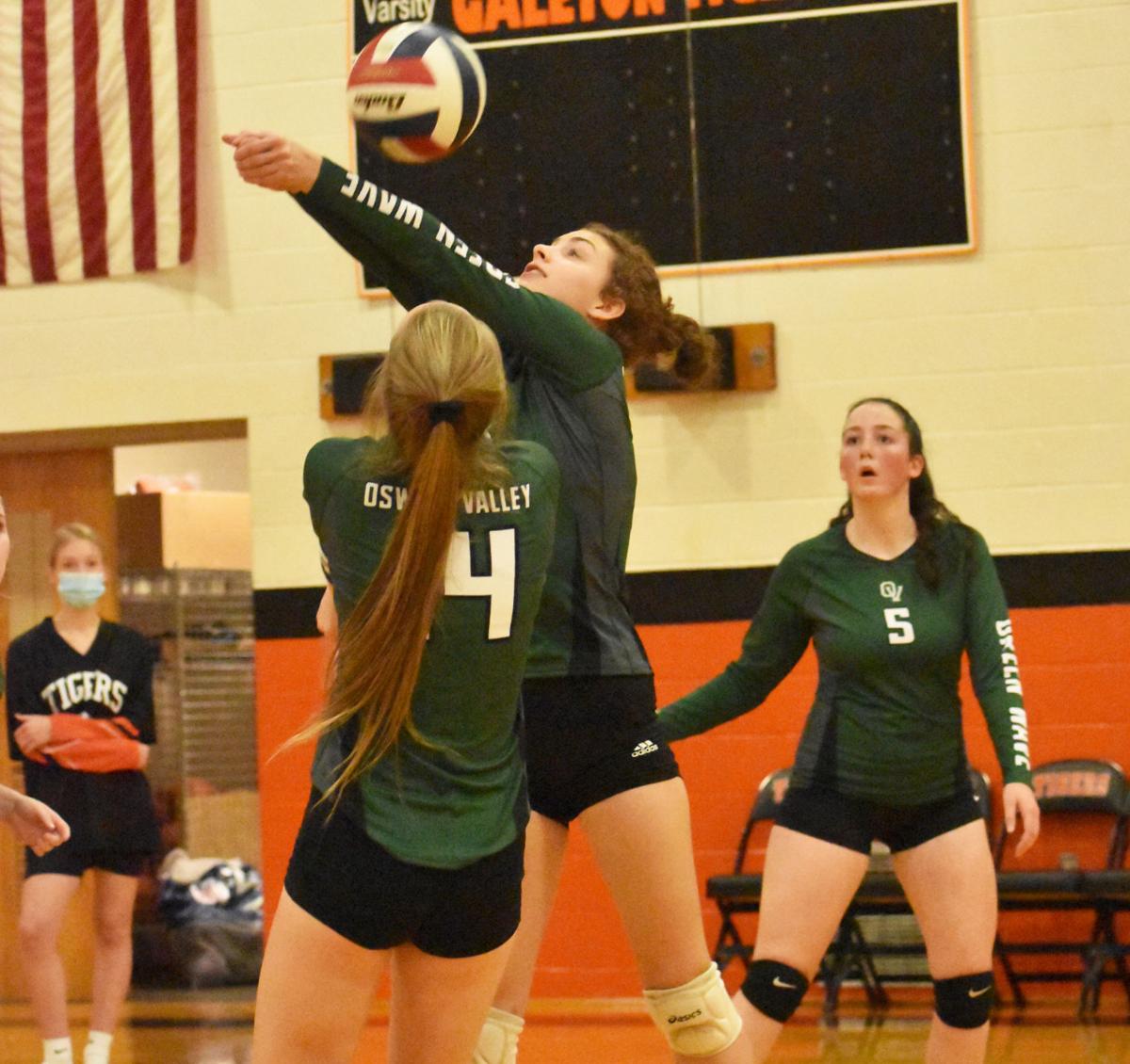 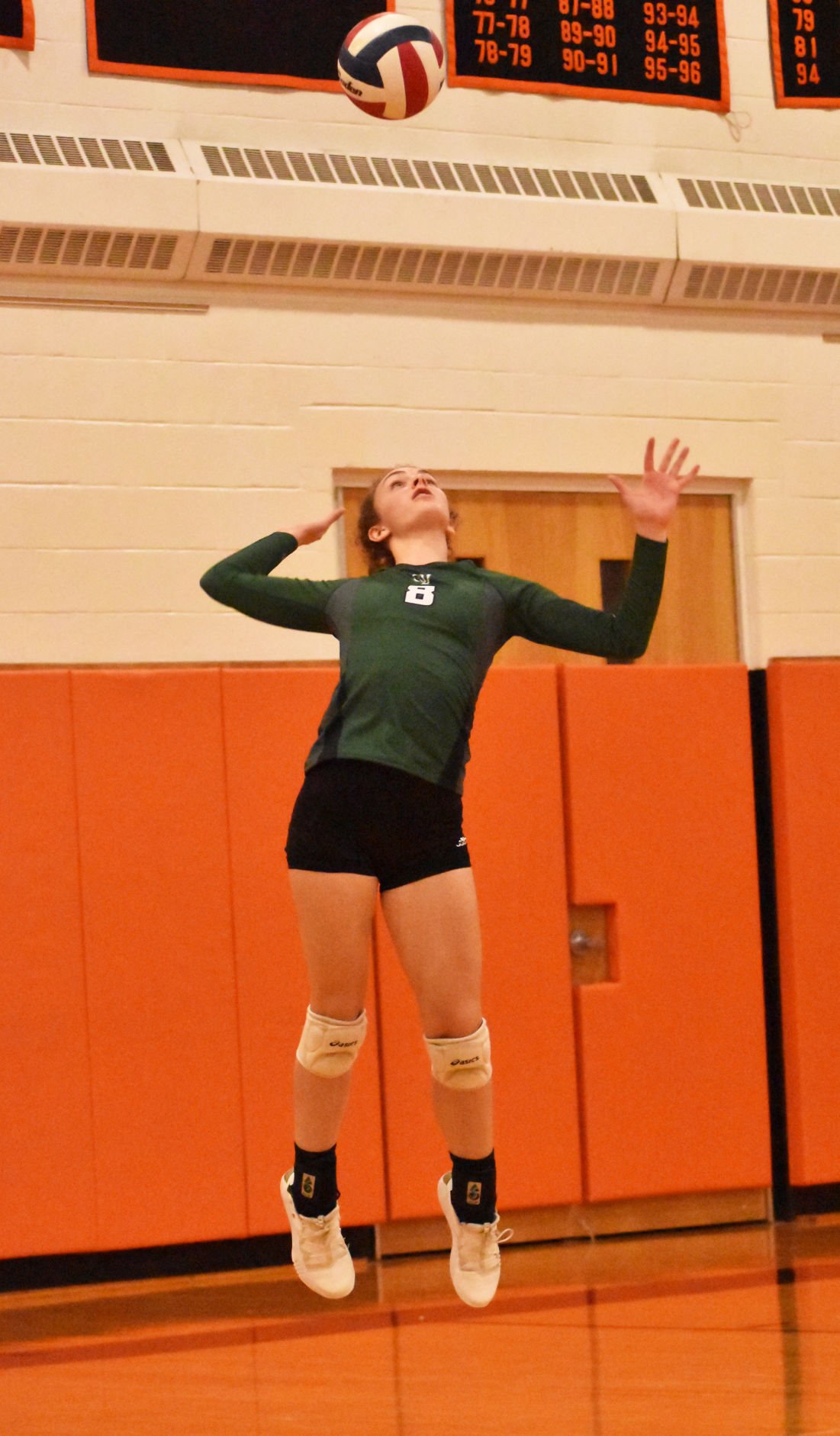 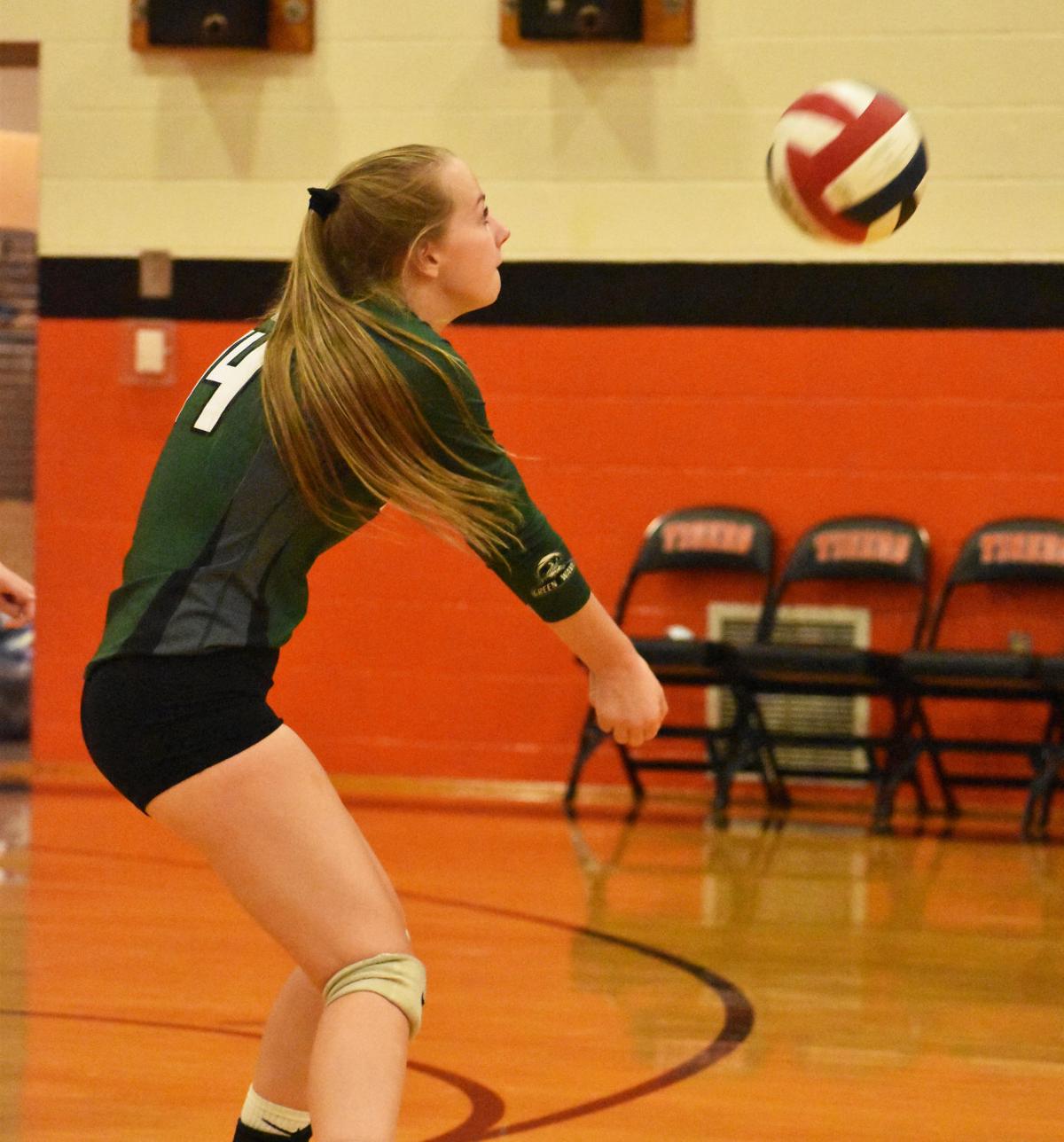 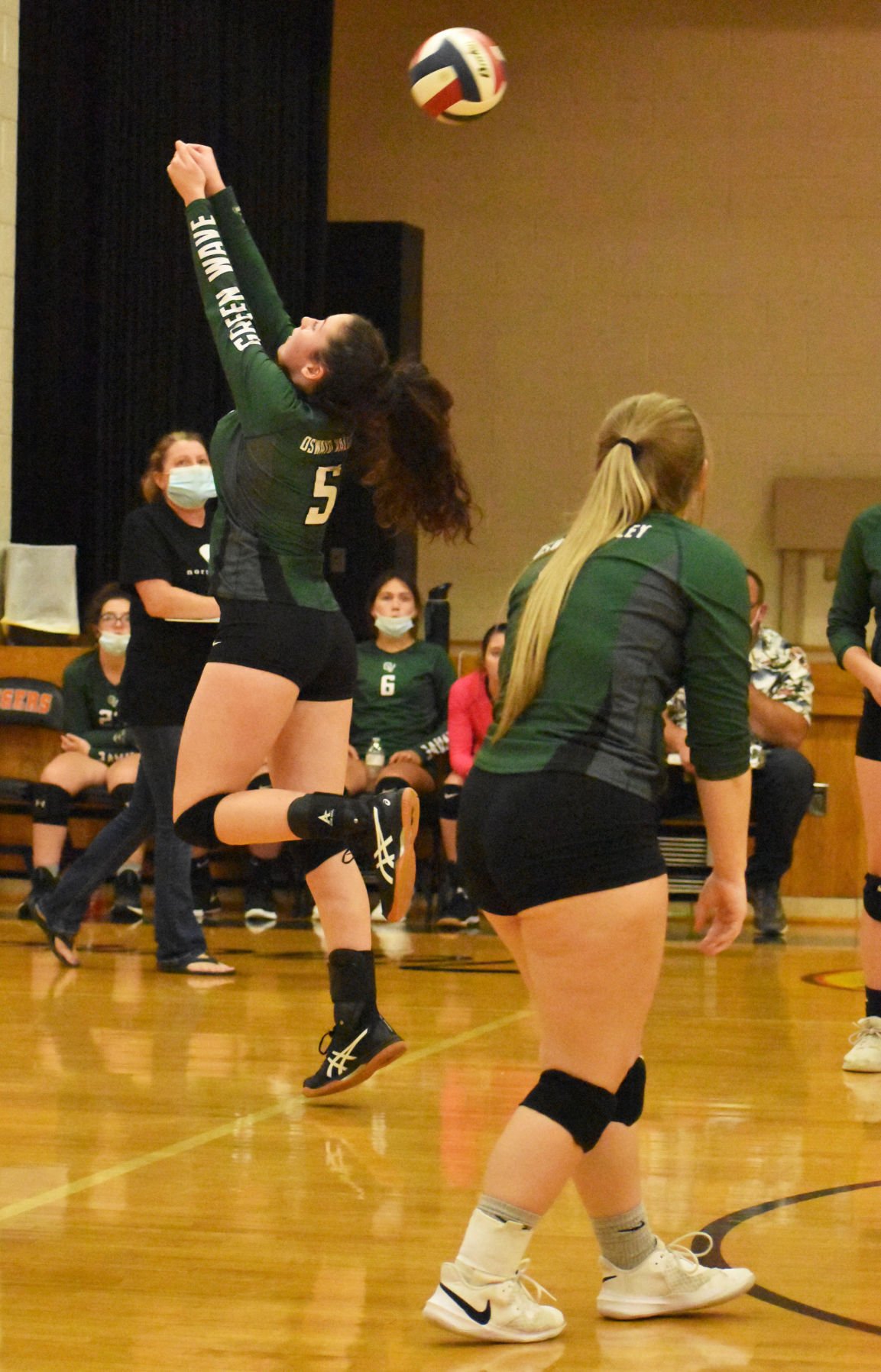 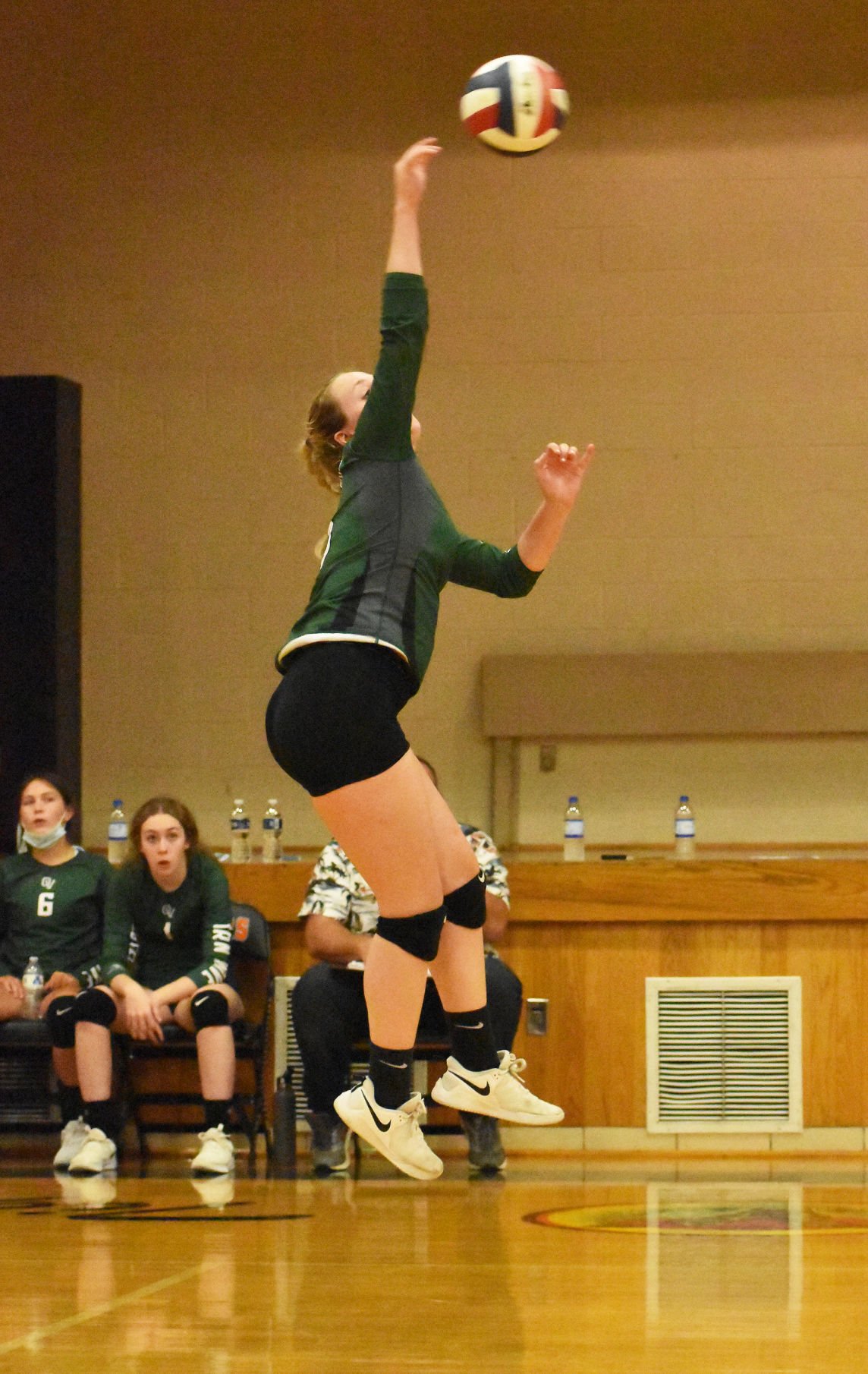 OV’s Avaree Kellert makes a jumping dig during their win over Galeton on Wednesday, Oct. 13.

Junior OV outside hitter Jadyn Brabham records a dig during their win over Galeton on Wednesday, Oct. 13.

OV’s Avaree Kellert records a dig during their win over Galeton on Wednesday, Oct. 13.

OV’s Avaree Kellert serves the ball during their victory over Galeton on the road on Wednesday, Oct. 13.

GALETON — The Oswayo Valley Green Wave volleyball team (10-0) entered the Galeton gym on Wednesday, Oct. 13 with an unblemished record and a tremendous amount of swagger. They used it to jump all over the Galeton Lady Tigers (11-3) early as they cruised to 3-0 sweep in a statement victory where their team played one of their most impressive games of the year.

“These girls are just amazing. We’re undefeated and nobody even knows that or even cares, but we don’t care,” Kellogg said. “We just take everything one game at a time and we just know that we are going to win.”

For the teams who don’t care about OV, they probably should start.

The Green Wave are hitting their stride down the final stretch of the year. In Galeton, they showed why they should be feared and respected amongst the best teams in District 9 as well as the ranks of the best Class A volleyball teams in the state.

After beating Galeton earlier in the season in a much more competitive outing that went five sets, OV came out of the gates swinging with an air of confidence and communication on their side of the court.

Their efficiency helped to set up their two big junior outside hitters in First Team All-State junior Jadyn Brabham, who finished with 15 kills, three aces and eight service points, and former Coudersport standout player and 2020 North Tier League All-Star Avaree Kellert, who finished with 11 kills, 12 digs and five blocks. They controlled the game from start to finish and set the tone in the first set.

“We have a very advanced team and we have played together since we were like in seventh grade, other than me transferring for that year,” Kellert said. “We always make sure we’re loud and excited and we make sure to always be there for each other.”

The energy was apparent. From the opening serve to the final point, the OV team exuded confidence that would directly mimic the play they would display on the court.

“We have a confident team,” Kellogg said. “We definitely keep the energy up.”

In the first set, the Green Wave were aided by a plethora of Galeton miscues while playing nearly mistake-free on their end. Their play at the net set the tone as they quickly ran out to a 16-2 lead that included a 9-0 run.

The defense was able to seamlessly segue into their offense and a large part of that came from the play of sophomore libero Laci Miller-Geiger who was flying around the court and was stalwart defensively.

“She played phenomenal tonight,” Kellogg said of Miller-Geiger’s play. “This was probably her biggest game and she was right there. It’s just a confidence that’s been building in her.”

Also with a big night was freshman Makenna Manning, who came up with four blocks and was key to the OV teams’ ability to control the net during the win.

“We just focused tonight on serve-receives because they have a couple of good servers that really can score on us, and they did last time,” Kellogg said. “We also were able to dominate at the net and our blockers were just phenomenal. We had a total of 13 blocks in three sets which were one of our bigger nights for that.”

Galeton would find some rhythm halfway through the set with junior middle hitter Alli Macensky stopping the bleeding as the Lady Tigers would spark a small run to close the gap to 16-5.

But a thunderous kill from the left, outside of the net by Brabham ended the Galeton run as they would roll to a 25-9 win and put the Galeton girls on the ropes early.

In the next set, the Galeton girls would show some resilience, and looked much crisper than their tough start to the matchup against OV.

After the two teams traded blows until the score was tied at six, Galeton would gain some traction. The Green Wave would make some uncharacteristic mistakes as the Lady Tigers would take full advantage with Johanna Dickerson picking up two aces in the mini-run to push their lead to 9-6.

But once again, the thunderous hitters on the OV side of the net would continue to place the ball almost anywhere they wanted, and Brabham would tie things back up at nine soon after as she was able to place a shot across the court that was nearly perfectly placed.

Things would continue to be a back-and-forth battle in the set, with junior outside hitter Olivia Rohrbaugh finding her groove in the set and delivering some impressive hits for her team but OV refused to go away until Galeton would make a run with the score tied at 14 apiece.

OV would find themselves on the other side of the mistakes, and two serving errors and one receiving error helped Galeton get themselves into an advantageous position up 18-14 and OV seemingly shooting themselves in the foot.

But the Green Wave would fight back, and their defense at the net neutralized the Galeton attack and had them flustered down the stretch as they were able to tie things back up at 22.

They would then outscore Galeton 3-1 in the final four points to take the second set and took control of things in an impressive and resilient effort that saw them outscore the Lady Tigers 11-5 to end the set.

“We do a lot of leg-work,” Brabham said. “We practiced our blocking a lot because that wasn’t good to start, but we had a big night. We have had big games all week, and we keep having big nights all week and that led into tonight.”

The OV team was able to shut down some talented hitters in the Galeton squad and defensively were aggressive, especially at the net, which helped lead them to such an impressive win.

“We just played aggressively on defense and I think we shut their hitters down,” Kellogg said. “They couldn’t get the ball to them enough.”

In the final set, there was much less parity as the Green Wave cleaned up their mistakes and put the pressure on the Lady Tigers, they would cruise to a 25-13 win and continue their undefeated season with an impressive statement and a 2-0 sweep over the Galeton team this season.

The precision was on display during the deciding final set, with junior setter Trinity Lundy helping to feed her hitters as she placed the ball perfectly throughout the set on her way to racking up a team-high 27 assists on the night to go along with her five digs.

“I think this set a mood for us and we’re heading to the playoffs soon, I think that a win like this sets us up for success,” Brabham said.

OV still has a busy week, with a contest tonight, Thursday, Oct. 14 with Coudersport on the road at 7 p.m. and another contest against Smethport on Saturday, Oct. 16 at 7 p.m. to end their gauntlet of a week.

“We have three games in a week already,” Kellogg said. “Coudersport tomorrow night and Port Allegany again on Saturday so this was our big win of the week here and this sets the pace for us.”

For the Galeton girls, they were able to see their setter and former OV player Johanna Dickerson record her 700th assist in the final set of play, but the team wasn’t able to rally behind the accomplishment and top her old team.

“It feels nice to reach a goal,” Dickerson said. “I definitely put in a lot of practice setting and a lot of years playing. It was hard at first (switching schools and teammates) because we don’t really know each other, but we’ve grown together and it’s a lot better.”

Also during the contest, Galeton also saw Macensky gain the new record for most kills in school history, and as just a junior expects to see that number continue to grow as she topped the 541 kills mark to be the top attacker in school history.

Galeton was led by Macensky and Rohrbaugh who had nine kills apiece while Dickerson had eight assists and topped the 700-mark, Mikayla Schott added seven digs, Lauren Sauley had 10 assists and 14 digs while Eve Cole added three digs.

The Lady Tigers looked to bounce back from the loss as they traveled to Otto-Eldred on Thursday, Oct. 14 at 7 p.m.

Partly cloudy in the evening with more clouds for later at night. Low 26F. Winds WNW at 5 to 10 mph.

Photos from the Dec. 2 newspapers are ready for viewing

Photos from the Nov. 25 newspapers are now online

Photos from the Nov. 25 papers are now online, Part 2

Photos from the Nov. 25 papers are now online, Part 1