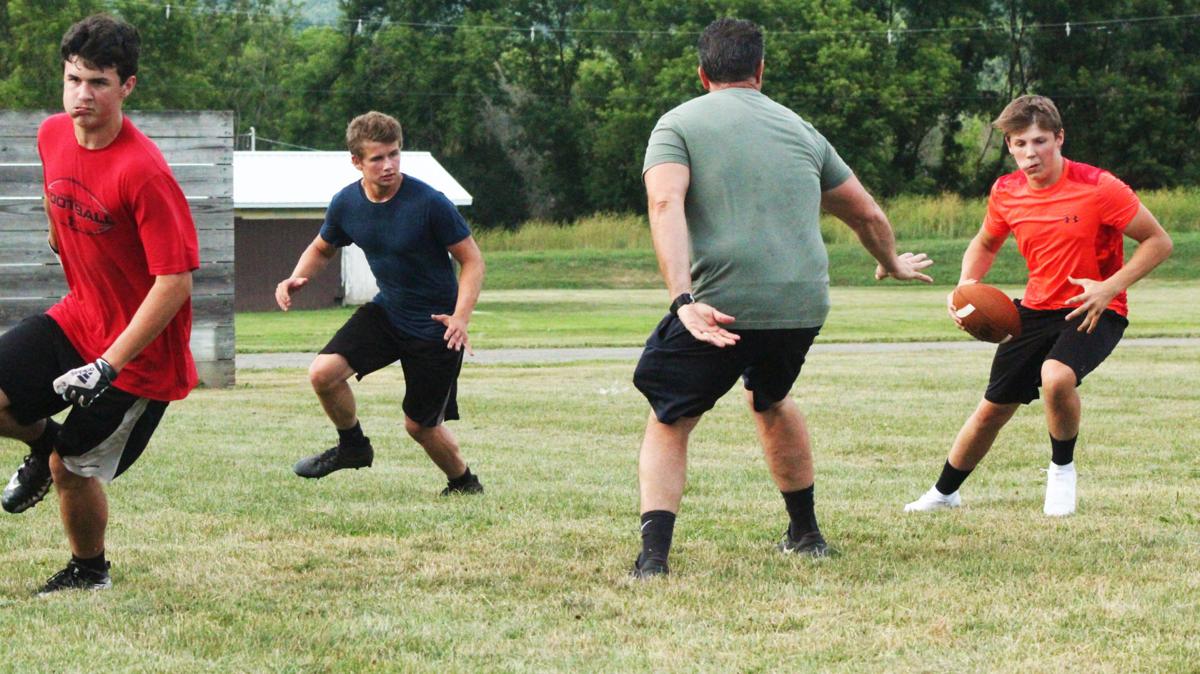 CV football's Tucker St. Peter sees his read and keeps the ball while running an option play during the team's OTAs on Thursday, July. 23. 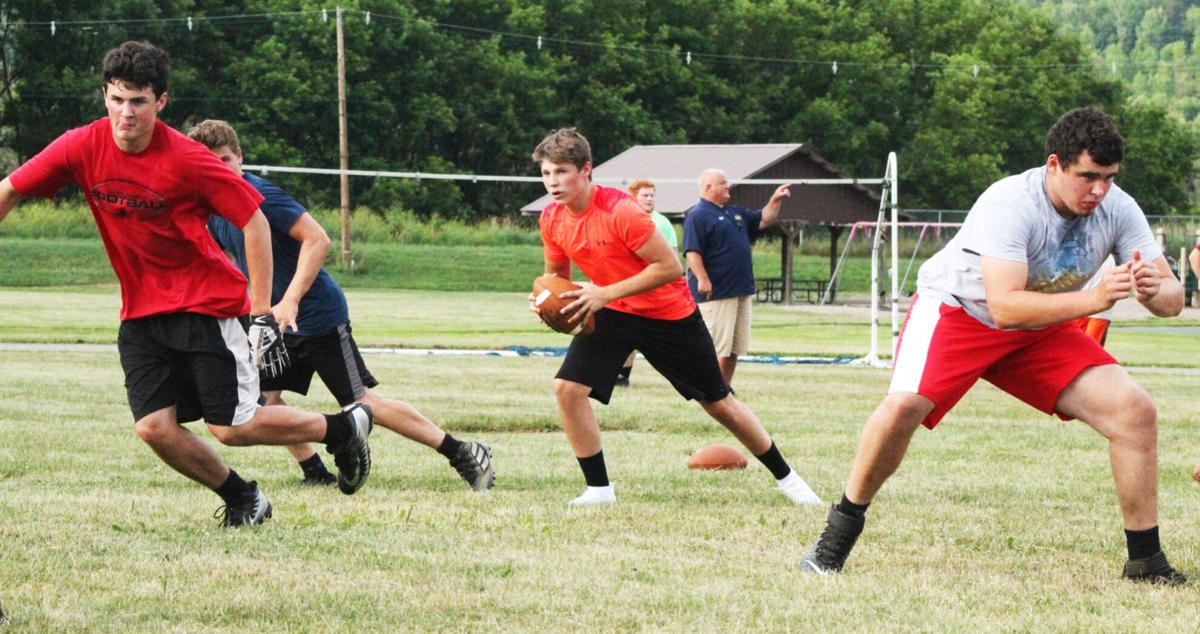 Tucker St. Peter heads towards the sideline on an option play with Tanyon Brown going out to block, Cody Flemming going out for the pitch and Kade Sottolano blocking in front during CV football’s OTAs on Thursday, July 23. 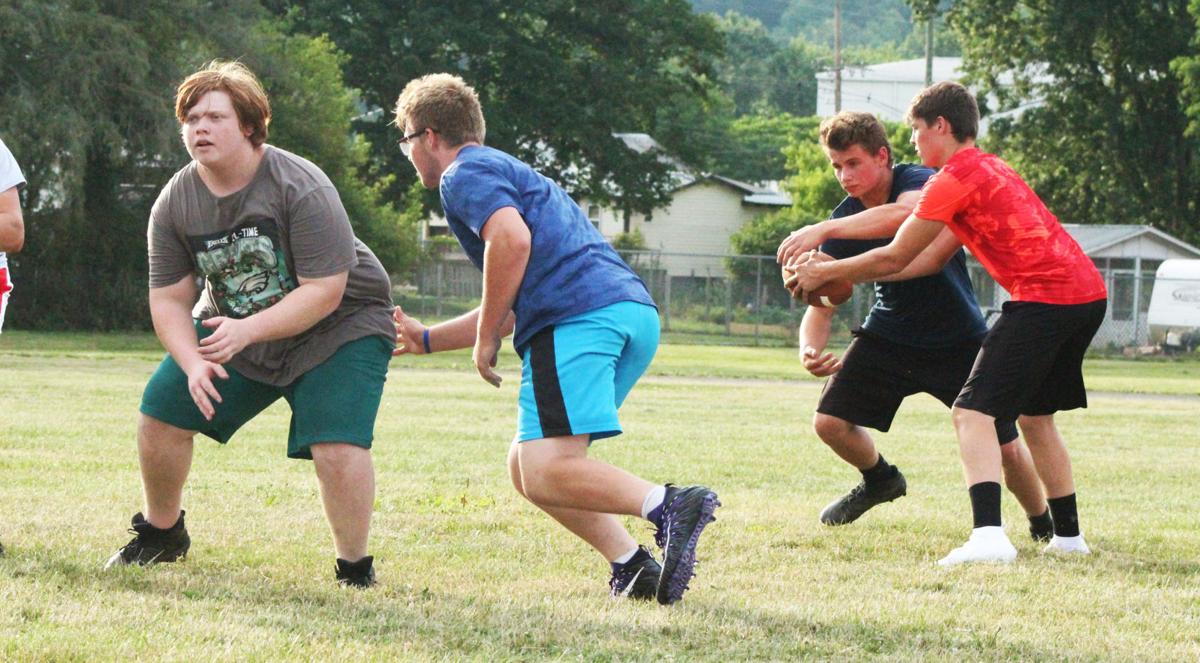 Tucker St. Peter puts the ball in the mesh point with Cody Flemmings while Mikey Sipps pulls around the center during an option play during the CV footballs OTAs.

CV football's Tucker St. Peter sees his read and keeps the ball while running an option play during the team's OTAs on Thursday, July. 23.

Tucker St. Peter heads towards the sideline on an option play with Tanyon Brown going out to block, Cody Flemming going out for the pitch and Kade Sottolano blocking in front during CV football’s OTAs on Thursday, July 23.

Tucker St. Peter puts the ball in the mesh point with Cody Flemmings while Mikey Sipps pulls around the center during an option play during the CV footballs OTAs.

One of the most run offenses in the history of football is the option. Since the dawn of football, coaches have looked for ways to use misdirection and reads in order to create running room for their players, and the Cowanesque Valley Indians football team will continue this age-old tradition with head coach Mike Schmitt starting to put his mark on the offense.

While there are many different forms of the option, from tight sets all the way to the more widely recognized in this day and age spread offense option, the CV football team will look to spread defenses out and let their athletes work.

“One of the big things that’s going to be different is we used to have Seth (Huyler) and he’s a little bit bigger and takes hits a little better,” starting quarterback Tucker St. Peter said. “So it’s going to be different for blocking and it’ll be important for them to hold their blocks just a touch longer so I can get outside and read the defense.”

Getting reads correct in the option offense is one of the most important functions in how the offense can be successful. The option is a play that the quarterback has ‘keys’ in which he is looking at that will dictate where the ball goes.

The name ‘option’ is just as the name implies, an offense that sees what the defense is showing them and uses that information to run the proper option of that set play in order to pick up yards.

With the many different forms of the option offense, St. Peter was able to give some insight to what to expect, which is spreading the defense and forcing them to adjust to the plays as it happens. Though not a traditional option offense like you would see at Army or Navy colleges, the spread offense option has made a big name for itself in high school and college football over the past decade in every corner of the country.

Though the premise of the option seems like one that may be user-friendly for offenses, it comes with specific challenges that usually fall on the split decisions made by the quarterback.

“If someone hesitates it can be difficult,” St. Peter said. “You have to make sure you make the right choices for your team.”

Though the quarterback would be considered the brain of the option offense, the offensive lineman could be the arms and legs. The blocks and awareness of where the ball is going, even when you can’t see it, is what makes a four-yard run turn into a 50-yard touchdown.

Two of the leaders on the offensive front for the CV team are Kade Sottalano and Mikey Sipps, who are both expected to be the ones clearing holes for quarterback St. Peter to operate.

“You know, coach does really make it easy for us and simple,” Sottalano said on running the option. “It’s really not hard, we just need to pay attention and know where Peter is and make sure you don’t go and fill in a spot you’re not supposed to be, which is one of the most difficult parts.”

Another important factor of running the option is pulling guards, creating space on the outside for the athletes to work. A pulling guard refers to an offensive guard or other lineman coming across the formation after a drop step behind the line, and then moving down the line of scrimmage behind other lineman in order to pick up blocks on the edge, which is not only challenging for many lineman, but completely pivotal in the aspect of running the offense.

“It’s very important,” Sottolano said on making sure you get the defenders pushed out of the hole on pulls. “You got to get angry and hit him hard.”

Sipps is the opposite guard to Sottolano, and is a player who is looking to come across the line of scrimmage and make important blocks in the option offense as well.

“Keep up the field, and make sure you have your head up and get him out of the way,” Sipps said on what he looks for when pulling in the option offense.

The misdirection implemented in this specific offense is key to its success, and Sipps believes the lineman play a pivotal role in deceiving defenses.

The last but certainly not least important player who is absolutely key to running the option offense is the pitch man, also known as the running back. With the reads the quarterback makes, it will directly correlate to when and where the running back gets the ball, but they never actually know when or if it is coming.

From catching the pitch, to having a feel for what the quarterback sees and reads, being a running back in an option offense can be difficult, but also extremely productive.

Cody Flemmings is a running back who will be seeing a lot of looks from the option offense, and is using the offseason to prepare and be ready.

“You have to remember your part in the offense,” Flemming said. “Everything counts, especially making sure you do your part…. You have to make sure your hole is open, and then if I get a guy there I can try and make a quick change of direction.”

Running backs may benefit from this specific offense, but it can also put them in some less than ideal situations in open space with defenders coming up directly into their face.

“I just go hard really and do whatever comes into my mind,” Flemming said on making people miss in open space. “You don’t really need to think about that, just go. You kind of just got to count on your guys, that’s probably the biggest part, but our team does a really good job of protecting us.”

With year two of the option offense opening up the CV football team, look for some new faces to attempt to perfect the “Art of the Option.”