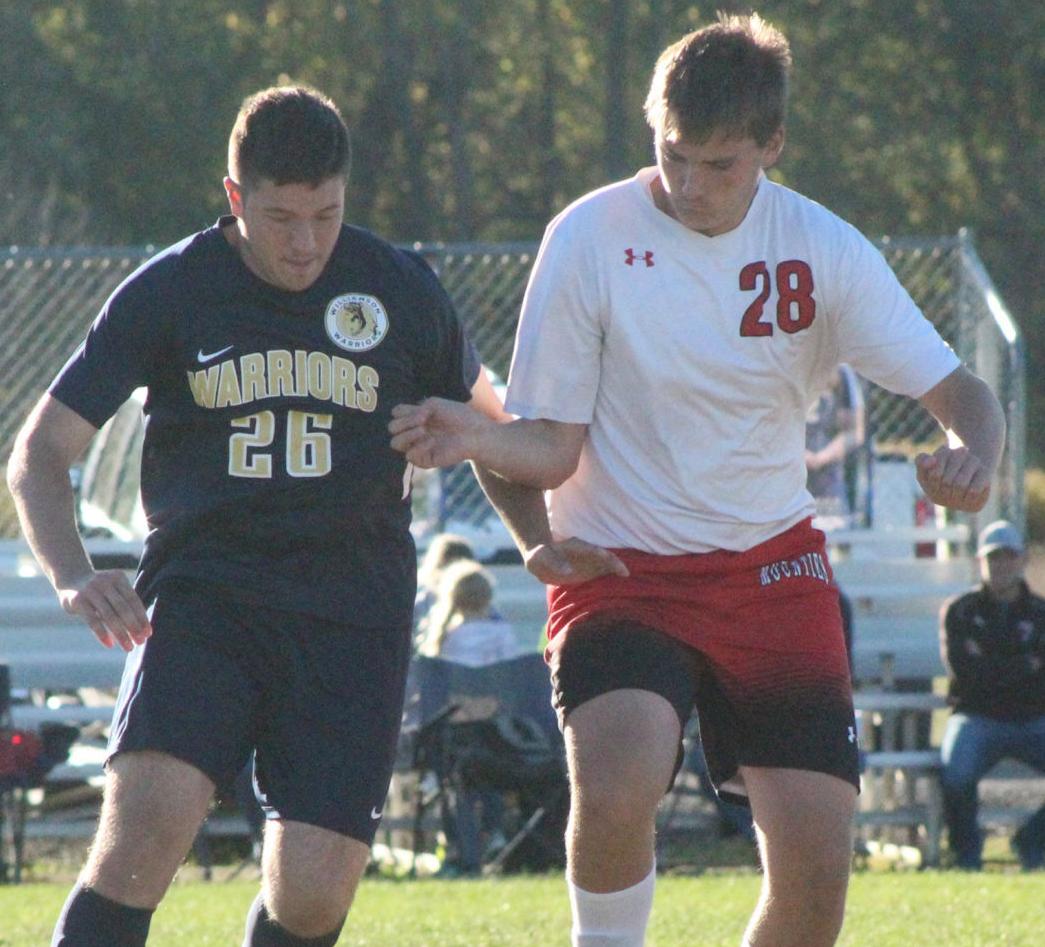 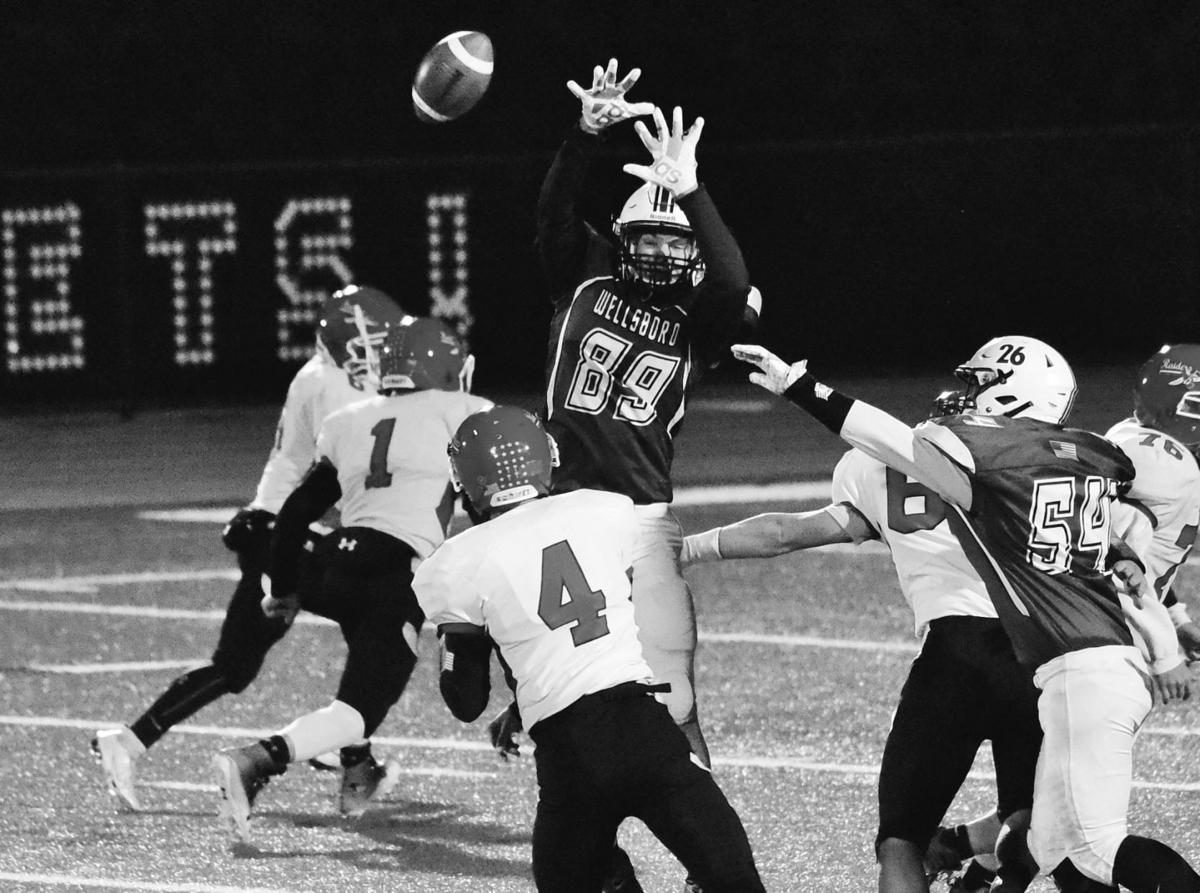 Ryan Sweet jumps up to swat away a pass at the line of scrimmage during the Hornets 42-6 win over Montgomery. 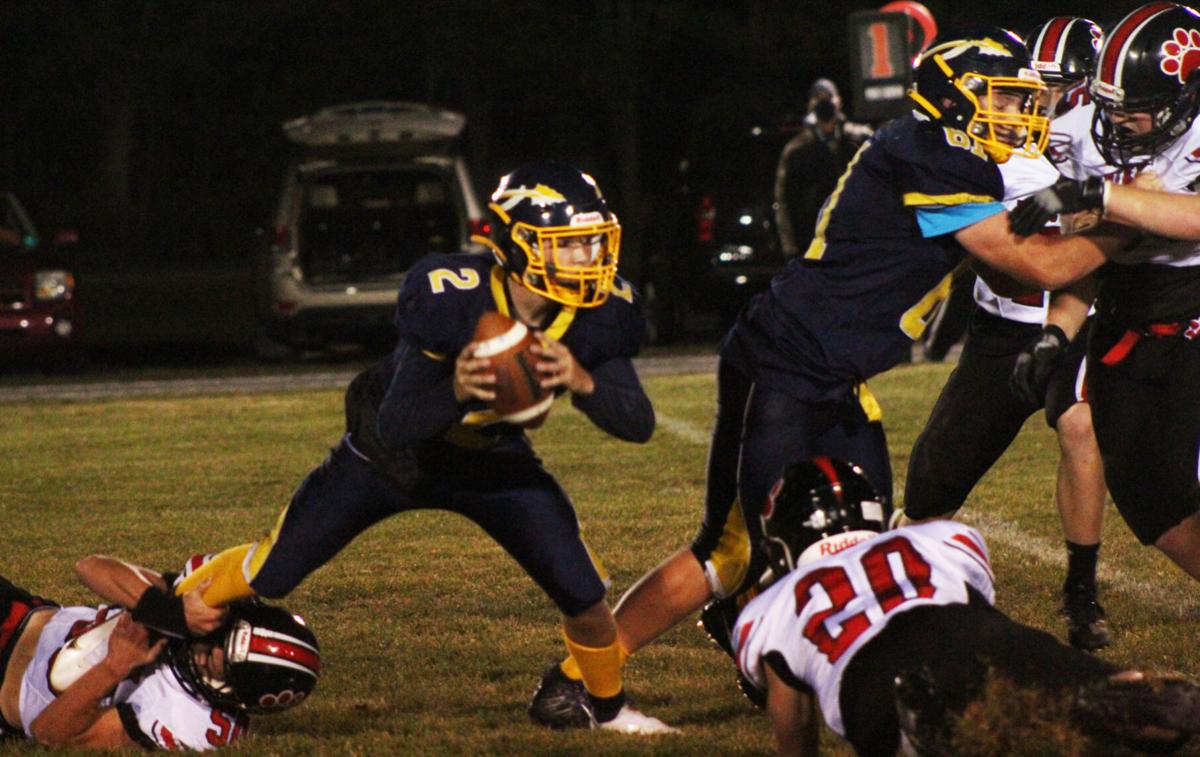 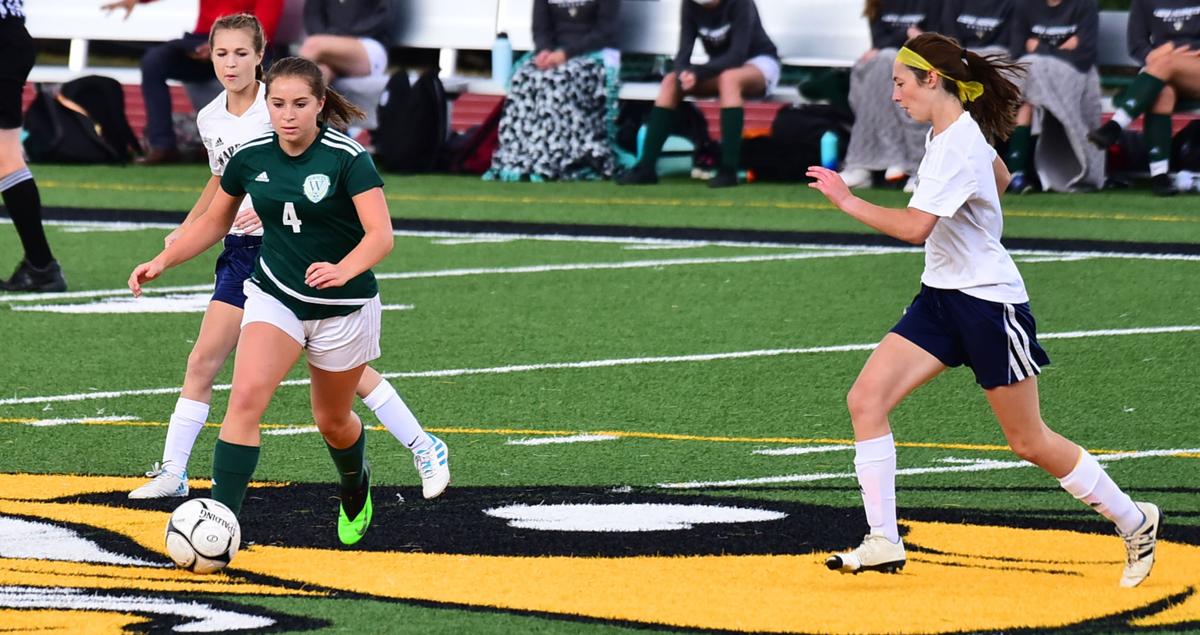 Jessa Lohr controls the ball during the Lady Hornets 14-0 win over Williamson on Thursday, Oct. 2. 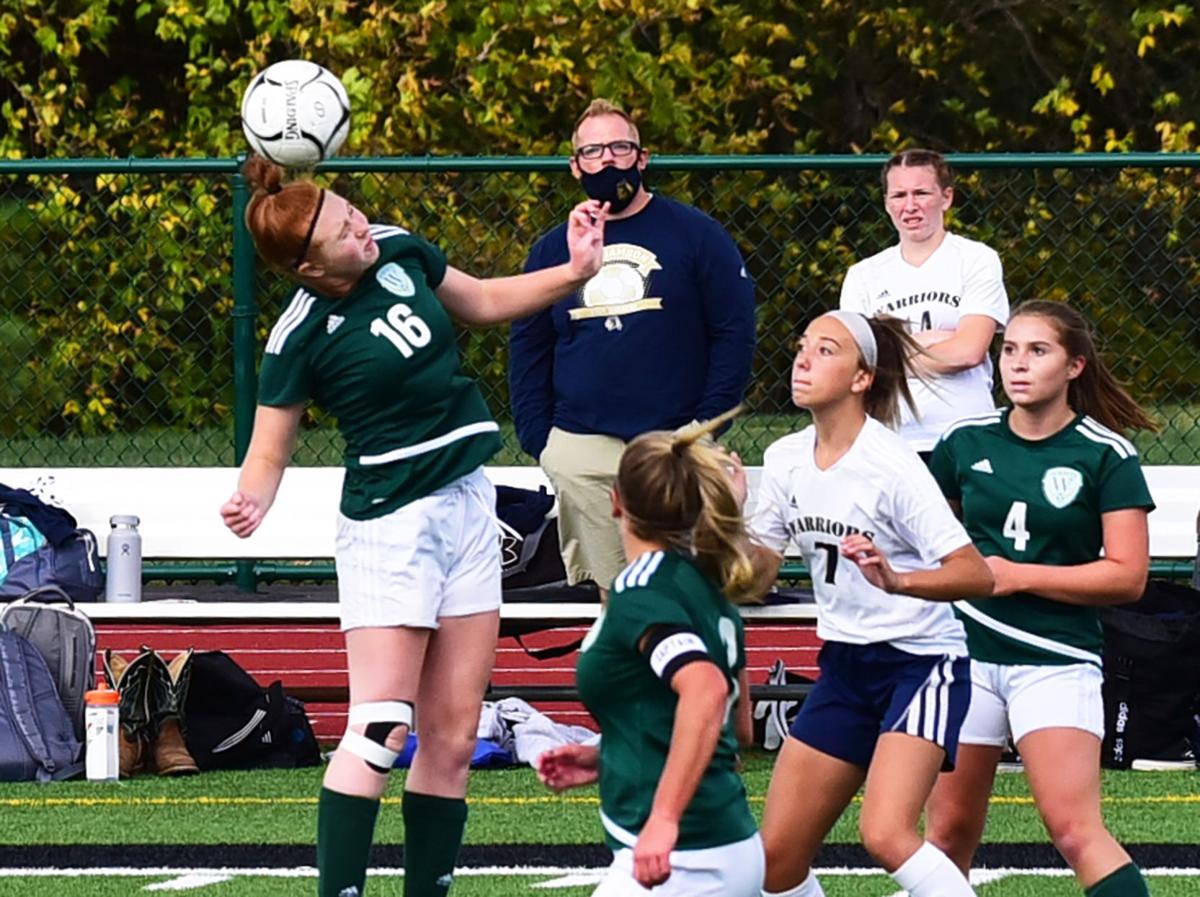 Emma Coolidge heads the ball during the Lady Hornets 14-0 win over the Williamson Lady Warriors on Thursday, Oct. 1.

Ryan Sweet jumps up to swat away a pass at the line of scrimmage during the Hornets 42-6 win over Montgomery.

Jessa Lohr controls the ball during the Lady Hornets 14-0 win over Williamson on Thursday, Oct. 2.

Emma Coolidge heads the ball during the Lady Hornets 14-0 win over the Williamson Lady Warriors on Thursday, Oct. 1.

The Wellsboro and Mansfield Gazette as well as the Free Press-Courier announce our Third team All-Stars for the fall sports season.

Sophomore Ryan Sweet has proven to be a force on the defensive side of the football for the Wellsboro Hornets football team. Though he didn’t get many touches on offense, he made his presence felt from the defensive end position in 2020 racking up 42 tackles and a sack and getting countless quarterback pressures throughout the year.

Though the guys up front don’t always get as much of the attention that skill players do, Danny Timmons was the senior leader of the Wellsboro line in 2020. The Hornets were able to run the ball for 913 yards and just over five-yards-per-carry with an inexperienced front this season. Timmons was the leader and one of the best offensive lineman in the area.

Senior defensive-lineman and running back Nick Smith was one of the best defensive players in 2020 for the Wellsboro Hornets, and also made an impact in the running-game as well. Smith racked up 20 tackles on defense and was very good at finding the ball when loose, which shows by his team-high two fumble recoveries. He also made the most of his carries toting the ball just ten times but gaining 60 yards and scoring two touchdowns in his limited carries.

CV Indians’ quarterback Tucker St. Peter had his season cut short but still put together a strong three and a half games before being shut down for the 2020 season. St. Peter was able to complete 36 passes for over 600 yards and also rushed the ball for 111 and scored four touchdowns on the season. The junior was also impactful in the secondary coming up with an interception and racked up 15 tackles in limited action.

North Penn-Mansfield Panthers’ senior Bryan Bogaczyk didn’t get to play every game during the season, but in limited playing time put together a good season running the ball. On just 23 carries he rumbled for 111 yards and a touchdown. He also put together some fine efforts in the secondary for the Panthers with a huge touchdown off an interception to help win against Wellsboro to go along with five tackles and a pass deflection.

One of the two top running backs for the Cowanesque Valley Indians offense, Cody Flemming put together a solid sophomore season gaining 254 yards on the ground and also scoring two touchdowns on the season. Running back Flemming has earned his carries in this offense and averaged just over four yards per touch during the season. Fleming is also a hard-nosed defender and added 24 tackles with two going for a loss during the season.

The Indians defense got much better as the season continued, and junior Michael Moore was one of the biggest contributors to only allowing 20 points or less in their final three games. Moore was second on the team in tackles with 33 total tackles with nearly five per game, and also scored a rushing touchdown on the year. He also recorded two tackles-for-loss during the season as well.

North Penn-Mansfield Panthers’ junior Cameron Fabian only had 53 yards of offense during the 2020 season, but made the most of it getting all of those yards on just nine touches. His impact is mostly felt on the defense end of the field, as he helped anchor the Panthers secondary. In just four games Fabian racked up two pass deflections and caused one fumble. He also racked up 17 total tackles in the 2020 season.

Another defensive standout for the North Penn-Mansfield Panthers football team, Fisher VanDruff ended his football career with a good season on the defensive-front for Mansfield. VanDruff led the team with two sacks and also had one quarterback hurry. Vandruff also racked up 13 total tackles during the season and was a disruptive force on the defensive line for the Panthers.

Midfielder Jessa Lohr finished off her career as Hornet in 2020 with a fantastic season that may not jump off a stat sheet, but certainly passed the eye-test. The Wellsboro defense was stellar in 2020 allowing only 11 goals and Lohr was great at disrupting the flow of offense of their competition and was also an underrated ball-handler who did a good job of getting the ball exactly where it needed to be for the Wellsboro girls to transition into their attack.

Midfielder Emma Coolidge was a strong contributor to the Wellsboro Hornets defense in the 2020 season, and was part of a team that only allowed 11 goals on the season. Coolidge was a tenacious defender and as only a sophomore has a lot of room to continue to improve. Anytime the ball came her way, Coolidge would be one of the first players there showing an immense amount of hustle for the Wellsboro team.

Becoming the goalkeeper as just a freshman is a tough position to be in for any player, but North Penn-Mansfield’s Tierny Patterson was solid between the posts for the Lady Tigers during the 2020 season. She may have allowed a lot of goals, but was constantly under duress during the season seeing a whopping 252 shots on goal and coming up with 18 saves per game during the effort.

Another goalkeeper who saw a lot of shots come her way was Williamson Lady Warrior Abby Ackley, who was strong her senior year despite not having as much success in the win-column in 2020. Ackley had 132 saves on the year playing in every game and recorded two shutouts as well. She logged an incredible 1,240 minutes during her senior season.

Part of the NTL Championship Wellsboro defense, senior Jonathan Wetzel was one of the unsung heroes in terms of how productive the Hornets defense was in 2020. Before the playoffs, the Wellsboro defense clamped opponents and rarely allowed shots on goal during the season. This was a testament to the play of Wetzel and other defenders during the season. Wetzel also got in on the scoring for the Hornets in 2020 and recorded four shots on goal and connected on three of those.

Another member of the elite-defensive unit that Wellsboro boasted in 2020, senior Zach Rowland was another player who helped hold the entire NTL to an astonishing seven goals during the regular season. Rowland and company were nearly unstoppable during the year, and Rowland even added three goals during the Hornets exceptional season.

Sophomore Galeton Tiger Ayden Whipple was a huge lift for his team in 2020 and helped them put together a 10-4 record during the season. Whipple was stalwart between the posts, and notched 74 goals during the season and 5.3 saves per contest to help power the Tigers defense to the District Playoffs.

One of the unsung heroes of the North Penn-Liberty soccer season, Brody Burleigh was a wall on the back end of the defense for the Mounties. Rarely did the ball make it past him and he also showed good speed and touch when the ball came his way during the season. He was also extremely reliable and durable, and tied for the lead in minutes played in 2020.

As only a freshman, Zachary Wilcox has made an immediate impact for the North Penn-Liberty Mounties soccer team and also received high-praise from the coaching staff for his skill and ability. Wilcox notched three goals and two assists in his first season and was one of the top hustle-players for the Mounties, and could be seen flying to the ball all game every game during his impressive first season.

Partly cloudy skies in the morning will give way to cloudy skies during the afternoon. Slight chance of a rain shower. High 44F. Winds SW at 10 to 20 mph.