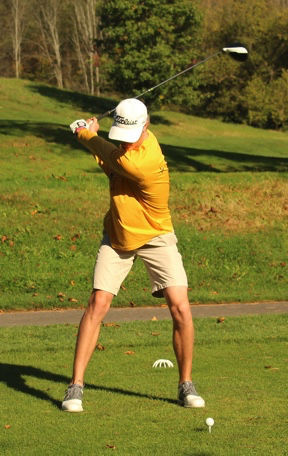 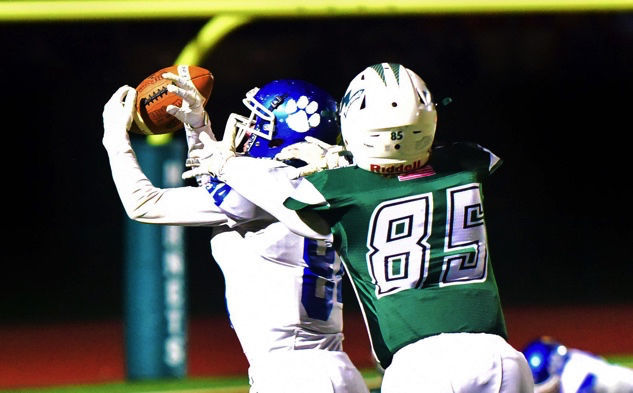 In a rematch from the previous week where the Wellsboro Hornets football team was able to soundly beat the North Penn-Mansfield Panthers 21-7, Mansfield was able to come up with an underdog victory against Wellsboro on the road in the first round of Districts in a defensive battle, 17-14.

Heading into the game, rumors swirled on the availability of NTL leading-rusher Aidan Hauser due to injury. With no Hauser, the run-game stalled a bit for the Hornets and despite rushing for 185 yards, it took 45 attempts to get there.

In the opening possession Isaac Keane dropped back, but didn’t see Panthers’ Mitchael Tice drive on the ball and Tice was able to take it all the way to the endzone to give Mansfield an early lead of 7-0.

Wellsboro was able to strike back, and in the opening minutes of the second quarter Alex Burrell punched in a touchdown from the one-yard line to tie it up.

In a game dominated by defense, the score remained at seven apiece heading into the second half.

The Panthers came alive in the third quarter and scored 10 unanswered points behind a long field goal from Nick Alexander and a wildcat formation pass from Cameron Fabian to Kohen Lehman that put Wellsboro into a deep hole with only six minutes left to play in the third.

Wellsboro would need some magic to come back and it seemed like the script had flipped after an incredible play by Silas Wagaman who returned a punt the distance for a 63-yards, a touchdown and a chance to take the lead and possibly a spot in the next round of districts.

The Panthers defense had other plans, with Logyn Choplosky playing one of his best games of the season to anchor the defense in crunch-time and hold the normally potent Wellsboro offense scoreless to win their first-round District Playoff and to get some revenge for the loss suffered the week earlier.

After a program-long drought of not winning a District Title, the Cowanesque Valley Indians golf team pulled off an upset to claim their first ever District Championship.

Austin Outman did what he normally does, which is dominate the field. Outman shot a day-low of 75 on the day and his vast experience on the golf course helped lead the way for the Indians.

The biggest key to victory for the Indians wasn’t just Outman’s performance, but how from top to bottom everyone came to play at a high level

“Joel shot two good rounds. And you know the weather was pretty bad. Everybody was playing in the same conditions, but it was extremely cold. It was windy and rainy and I was really proud of everybody,” coach Heck commented on his team’s performance.

The Indians had three golfers qualify for Individual regional play, Outman, Heck and Skylar Smith. They will have a shot to play on Monday, Oct. 14 for individual play after falling short as a team in the regional competition on Thursday.

After regionals, Outman was the lone Indian who qualified for the State tournament. After an uncharacteristically slow start on day one, Outman found his groove on day two.

After shooting a 77 on the first day of the state golf championships, Austin Outman came out on fire during the second day of competition.

Outman led all golfers on the day while shooting a 70 and moved himself from a tie for seventh place all the way to the second spot.

Outman was able to claw back from being down five shots, to move within three shots of the leader, and give him the second place finish in the competition.

Outman was the only golfer on the day to shoot under par at -1, and has capped off a great season for the golfer while matching his season low on the biggest stage he has faced all season.

During his second round of play, Outman shot three birdies, compared to only two bogeys in the afternoon. He was steady throughout leading him to one of his best finishes so far this season.

During the season, the Indians golf team played second fiddle to the Wellsboro Hornets golf …

Gazettes' Athlete of the Week