Bicyclists rode down the Rail Trail during to 105-mile gravel ride hosted by the Endless Mountains Crew on Saturday, Aug. 8. 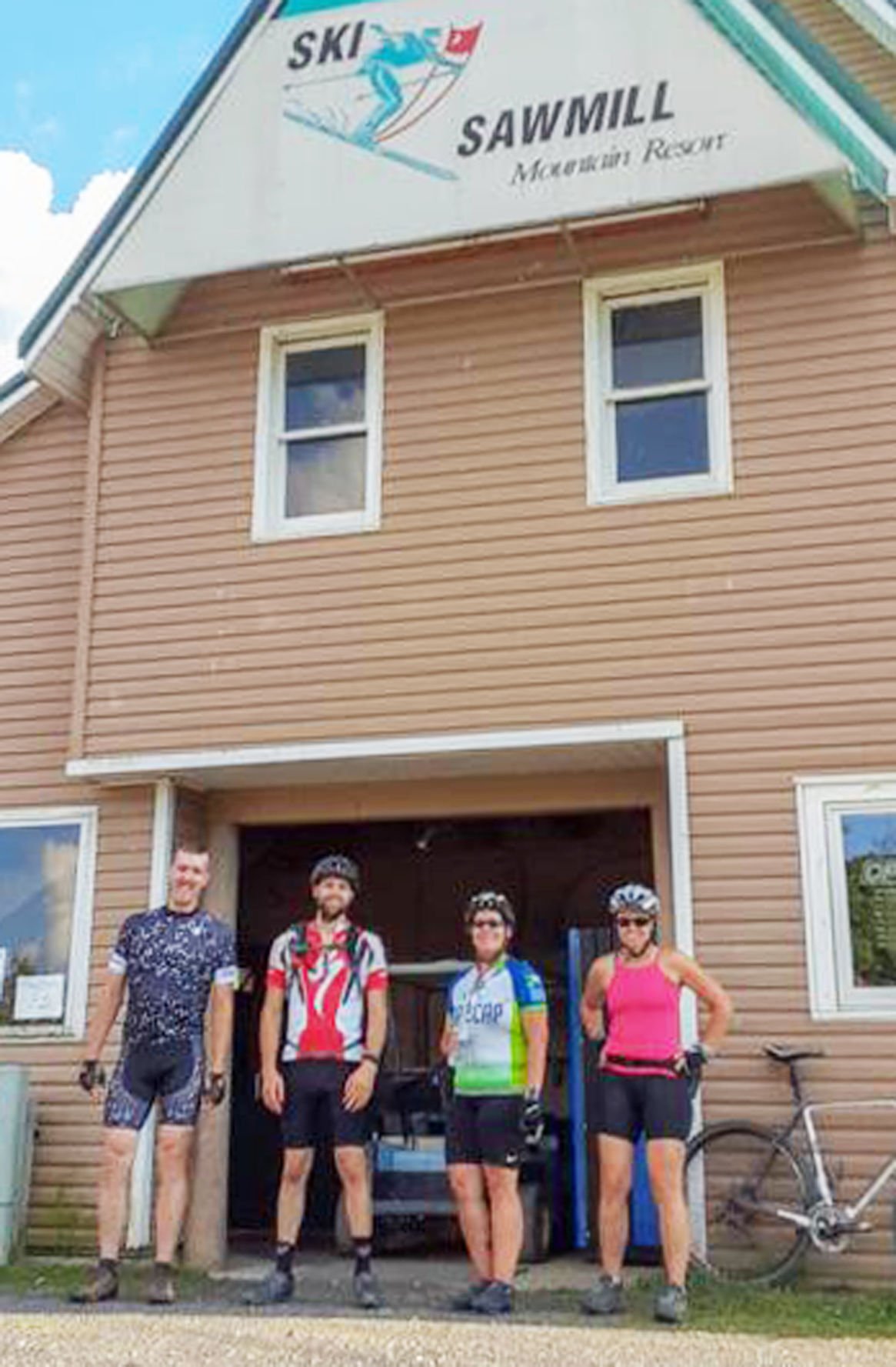 The bicyclists taking part in the GT-105 Gravel Ride on Sat. Aug 8 pose for a photo outside of Ski Sawmill.

Bicyclists rode down the Rail Trail during to 105-mile gravel ride hosted by the Endless Mountains Crew on Saturday, Aug. 8.

The bicyclists taking part in the GT-105 Gravel Ride on Sat. Aug 8 pose for a photo outside of Ski Sawmill.

WELLSBORO — The Endless Mountains Crew hosted their first ever GT-105 Gravel Ride on Saturday, Aug. 8 where bicyclists traveled an incredible 105 miles from The Green at Wellsboro to Waterville and back on the Rail Trail starting at 7 a.m.

It took the cyclists nearly 11 hours to complete the long journey with three of the cyclists finishing with a time of 10:26:57 at a rate of 10 miles-per-hour and with one lone rider leading the pack and finishing several hours earlier than the other cyclists.

“Four Cyclists that completed the Century goal (100 miles on a bike),” James Llewellyn, event organizer said about the turnout. “We had two other riders that rode about 20 miles with us that couldn’t ride more due to schedule conflicts.”

During the ride, the cyclists enjoyed the beautiful scenery with the weather cooperating nicely throughout the ride, with two of the riders hitting the century mark on a bicycle for their first time ever during the event.

“Two out of the four riders had never ridden a century before and both of them hit that goal on the ride that was super exciting,” Llewellyn said.

Even with the beautiful landscape and riders hitting new goals during the event, not everything was easy sledding on the 105-mile trek through the Rail Trail, and Llewellyn pointed to Dam Run Road as one of the most challenges sections of the journey with a monstrous hill to climb in the midst of an endurance based cycling adventure.

"Climbing Dam Run Rd. on a bike was so hard to conquer,” Lellewyn said on some of the more challenging parts of the trip.

With the GT-105 Gravel Ride being successful as the first gravel ride put together by the Endless Mountains Crew, Llewellyn is certain that another event of the same caliber will take place.

Also after seeing some of the challenges route-wise of the ride, they will look to hammer out some of the kinks in design to give riders an option to take multiple routes on the same distance ride to match skill levels of participants as well as looking into virtual race segments to add some competition to the mix.

“I will definitely plan another one, I am already working on both routes,” Llewellyn said. “I’m going to shoot for them to be a 100 miles but one being drastically easier than the other one so riders can pick which route they want to do based on their skill level or the pace they want to keep. I also plan on setting up virtual race segments on Strava so that the faster Riders can compete amongst one another.”

With the ride over, Llewellyn was just excited to ride again, and was extremely pleased with how the event turned out and enjoying a day taking in the sights of Pennsylvania as well as enjoying a shared hobby with others who appreciate biking as much as himself.

He also wanted to give special thanks to C.S. Sports in Wellsboro, who opened early in order for the cyclists to be able to grab gear before making the trek. He also wanted to thank Ski Sawmill, who provided refreshments for the group during the third and final stop before the last stretch of the ride.

“I was just really stoked that everyone completed the ride safe and healthy and just had a great time riding bicycle together,” Llewellyn said. “it was a very fun memorable experience and I definitely plan on doing it again.”

For those interested in taking part in the next 100-mile event hosted by the Endless Mountain Crews, next year’s event will be called the Canyon Country Century.

Considerable cloudiness. A stray shower or thunderstorm is possible. High 76F. Winds WSW at 10 to 15 mph.