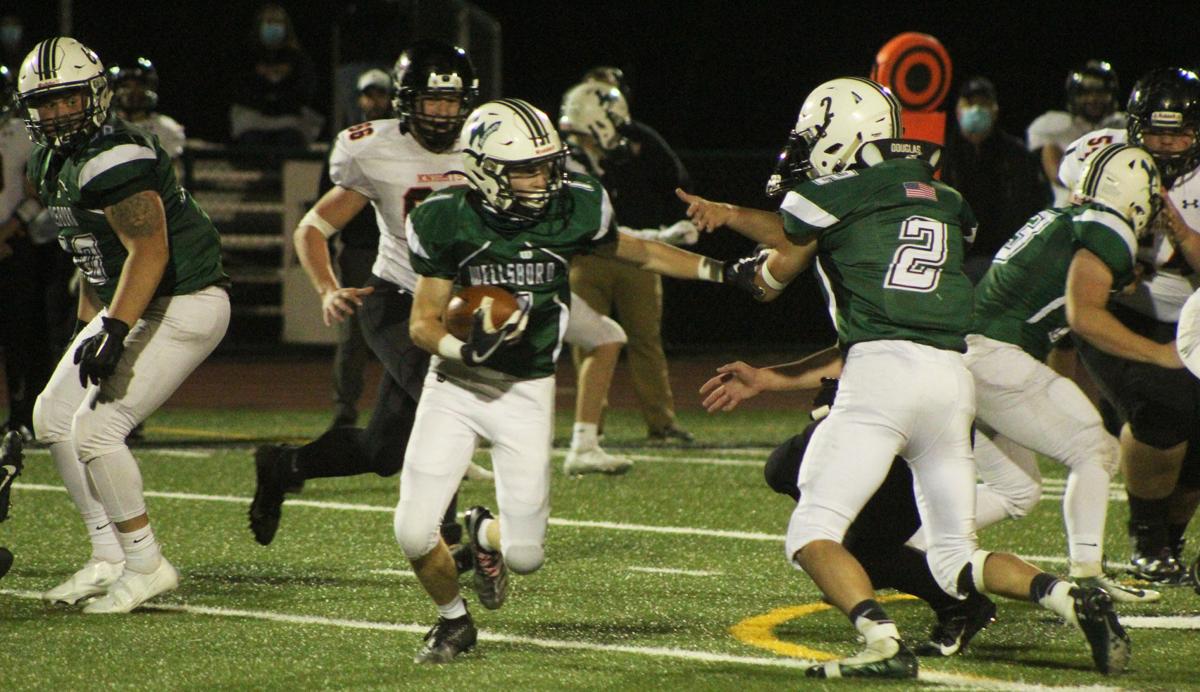 Conner Adams looks for running room during the Wellsboro Hornets win over Towanda on Friday, Oct. 9. 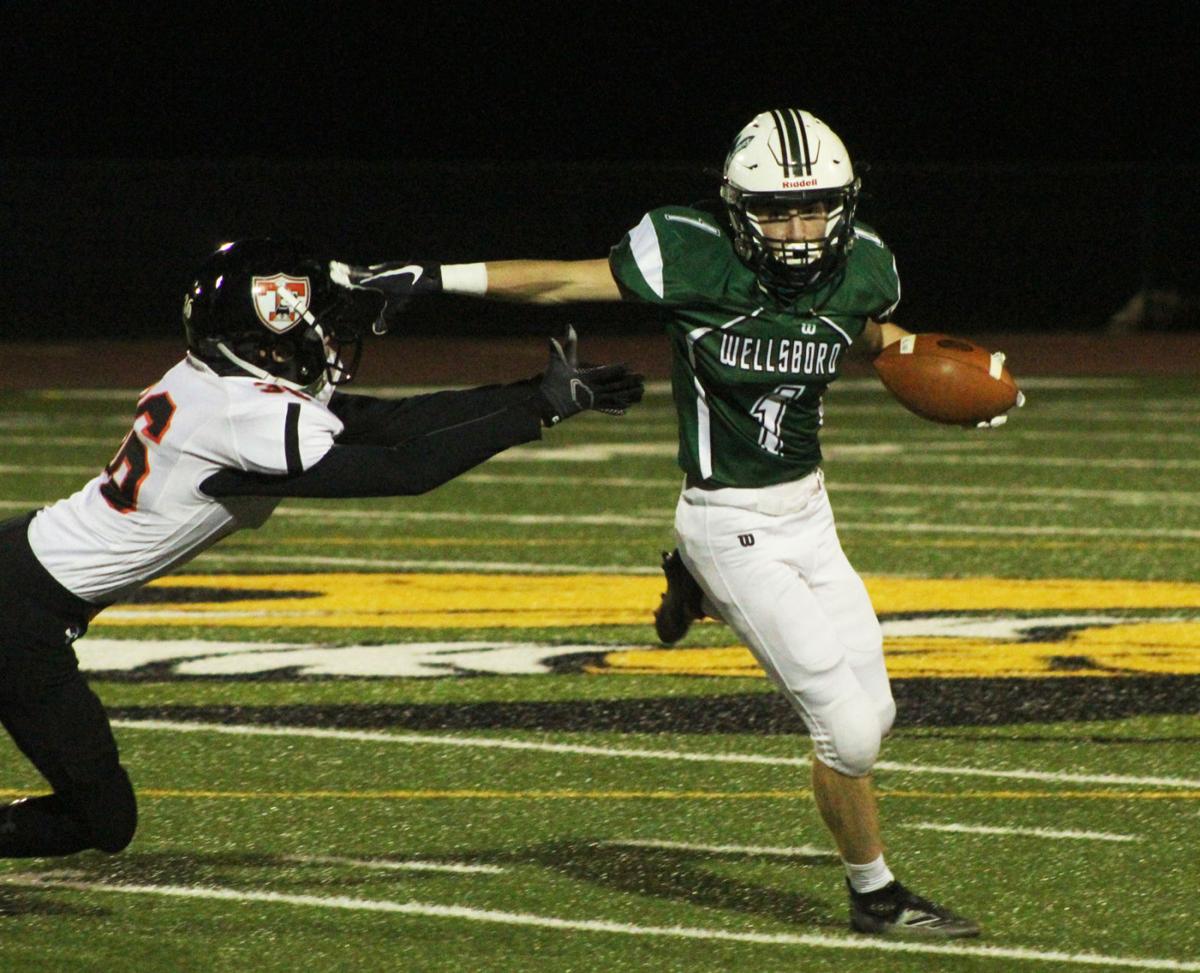 Conner Adams delivers a devastating stiff arm during the Hornets win over Towanda on Friday, Oct. 9. 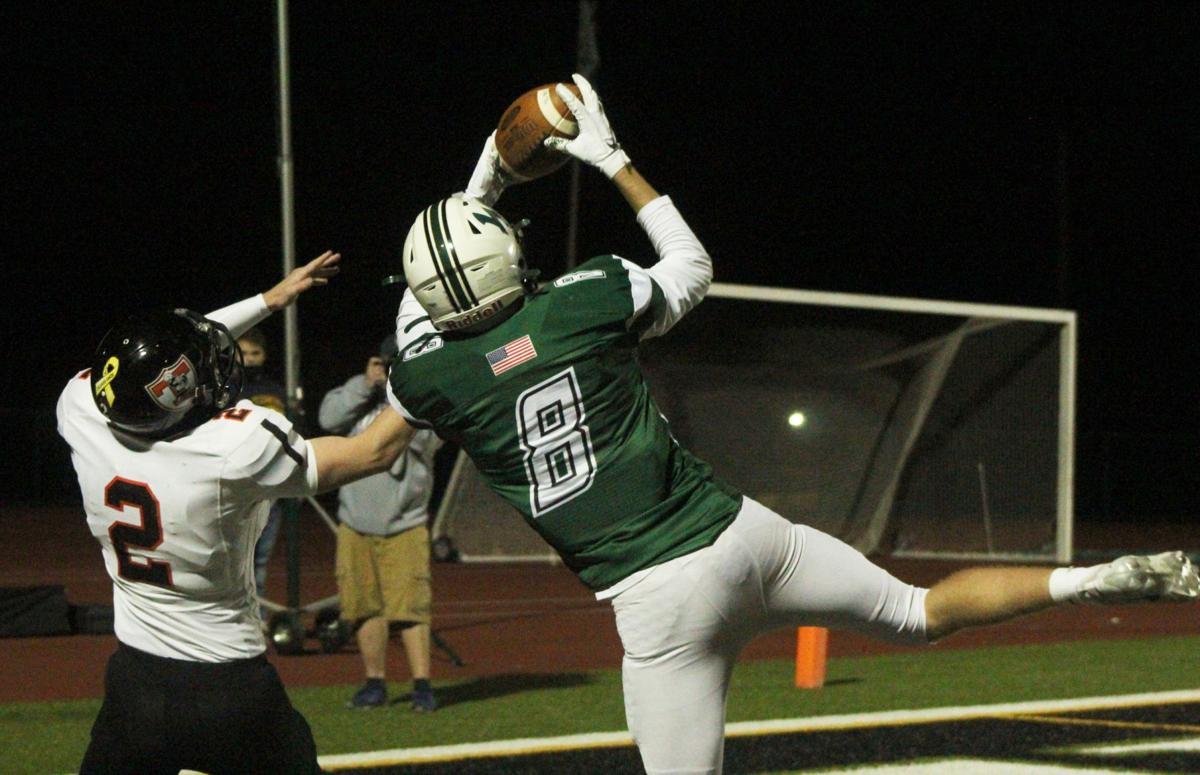 Zach Singer hauls in a first quarter touchdown catch during the Hornets win over Towanda on Friday, Oct. 9.

Conner Adams looks for running room during the Wellsboro Hornets win over Towanda on Friday, Oct. 9.

Conner Adams delivers a devastating stiff arm during the Hornets win over Towanda on Friday, Oct. 9.

Zach Singer hauls in a first quarter touchdown catch during the Hornets win over Towanda on Friday, Oct. 9.

WELLSBORO — The Wellsboro Hornets football team (2-1) were able to overcome a two week layoff and dominate the Towanda Black Knights (0-5) in a 43-0 shutout for their second win of the season.

The Wellsboro offense opened up the scoring frenzy near the end of the first quarter when quarterback Isaac Keane threw one of his three touchdown passes on the night with a perfect over-the-top throw to Zach Singer that opened the floodgates in the game.

After another stop, Wellsboro struck again with Darryn Callahan taking a 14-yard run in for a touchdown extending the lead to 13-0 after a failed extra point on a broken play.

With the Towanda offense struggling through the first quarter of play, they started to put things together on a long drive, but was stalled by a terrific pass breakup by Will Kibler in the end zone to force fourth down.

Singer then came up with yet another huge play, getting to the punter for the sack and giving Wellsboro excellent field position on their next drive.

The Hornets were able to capitalize, after getting put into a fourth down situation of their own, Conner Adams was able to pull in a catch after a bobble on the sideline to pick up a key first down in the second quarter.

Keane put the exclamation point on the drive when he broke free on third down for a huge touchdown run.

Wellsboro tacked on three more points as time expired on Jack Poirier’s 26-yard field goal, and at the half Wellsboro was up 23-0 with no signs of slowing down.

In the third, a pair of touchdowns from Keane to Kibler quickly put the game quickly out of reach, and Adams was able to shut the door on Towanda in the fourth with the final score of the evening on a 28-yard touchdown run.

The Wellsboro defense was the real star in this contest. The Hornets only allowed 136 yards, no touchdowns and swarmed the ball all night with at least three Hornets around the ball on every play.

The defense was led by Hayes Campbell with eight tackles on the night, Joe Brown with seven and Ryan Sweet with six tackles and a key sack in the first half.

Kyle Monague and Axil Mattison both added sacks in the effort and Adams and Dylan Abernathy both came up with interceptions in the win.

On offense, everyone got in on the scoring in the blowout, and Keane accounted for 179 yards and four touchdowns in the game.

Kibler was also a big threat in the passing game and came up with two long touchdown receptions in the third for 58 yards and two touchdowns and the young cornerback/wide receiver has made an immediate impact on both sides of the ball for the Hornets in 2020.

Wellsboro may have gotten a good tune up game against Towanda, but will need to kick things into high gear when they face one of the best teams in the NTL when they host Troy on Friday, Oct. 16.

In their matchup last season Troy was nearly unstoppable scoring 42 points and rushed the ball for almost 400 yards and six touchdowns. Wellsboro will need a perfect game from their entire team if they want to escape with a victory.